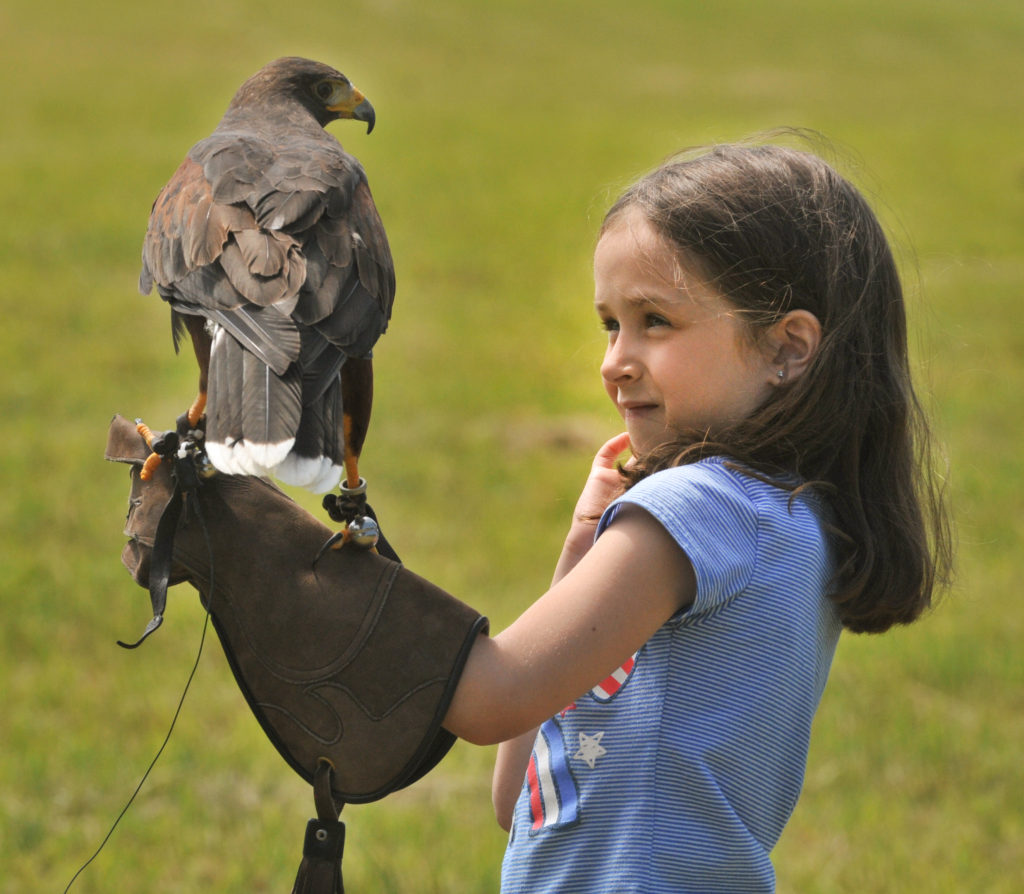 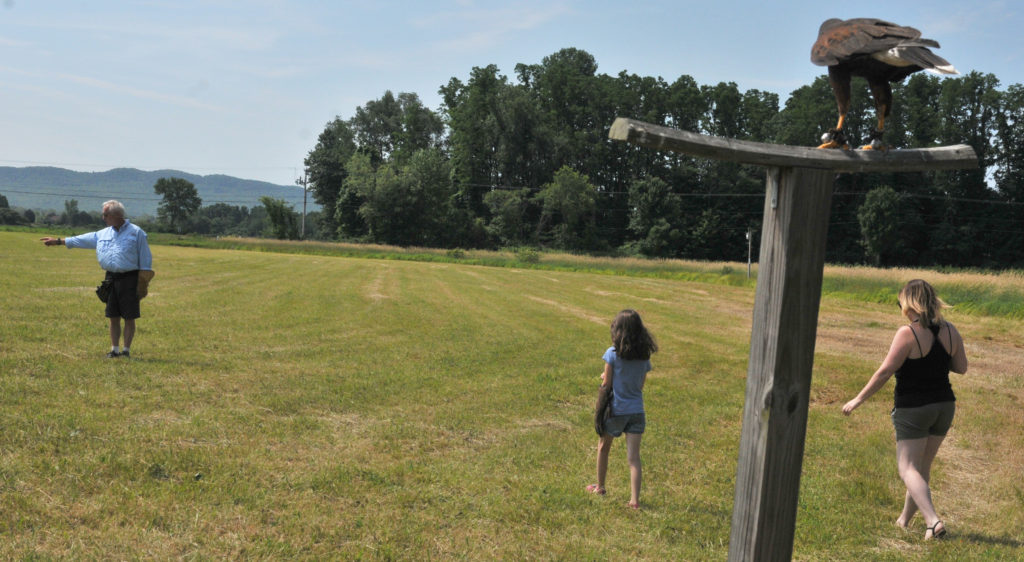 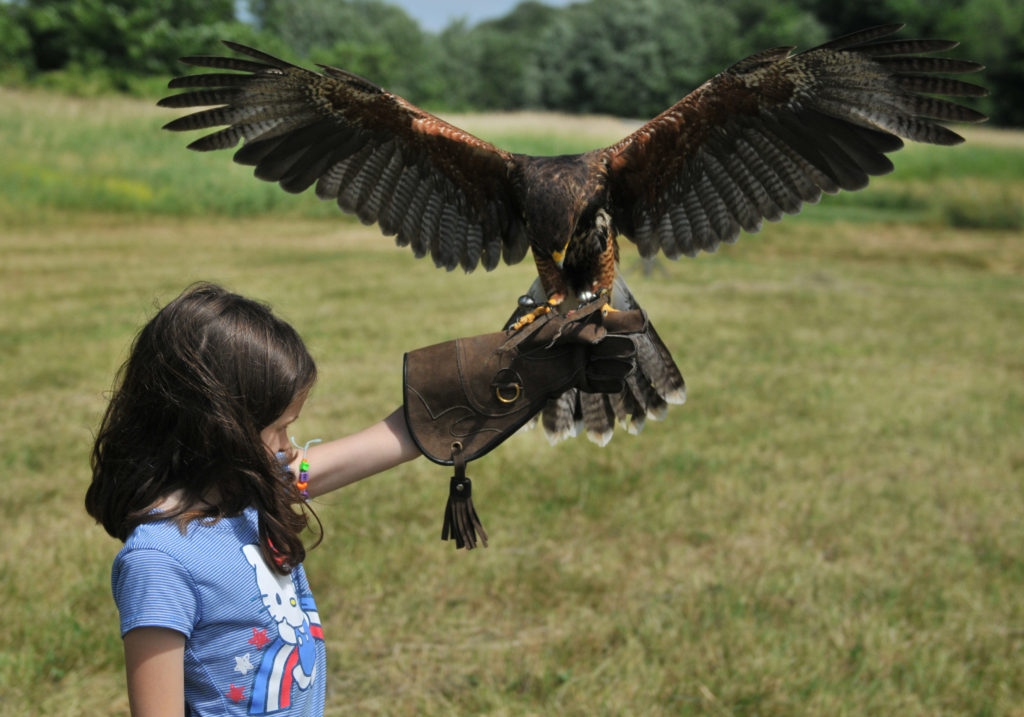 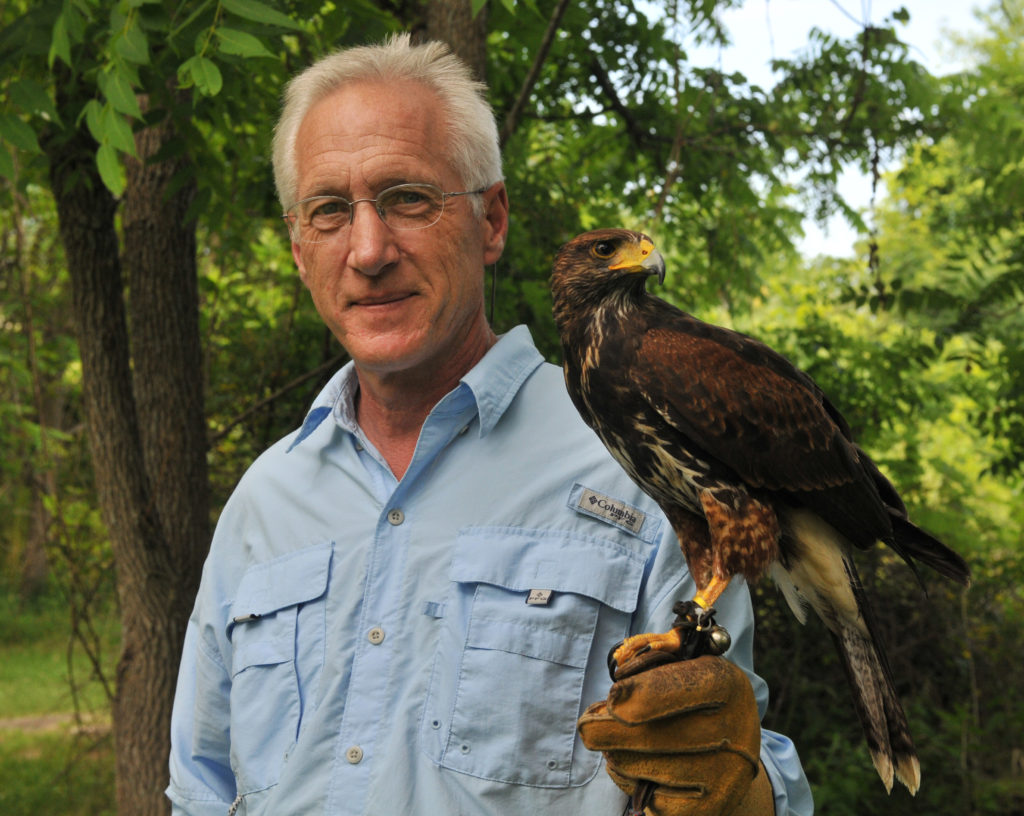 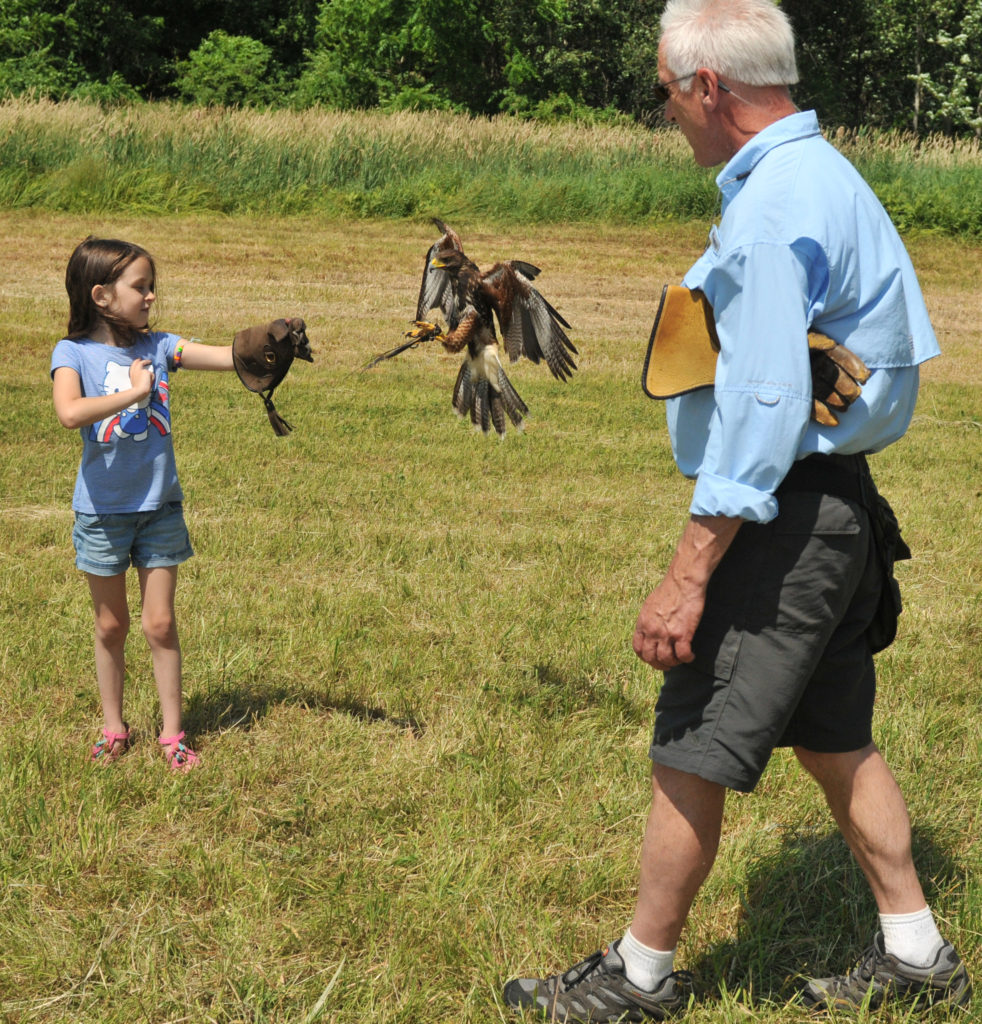 Call of the wild

At the edge of a shady green grove in Hadley, light streams through the forest canopy in thin shafts. It speckles the grassy floor below, where three large birds of prey sit awkwardly, tethered with thin leather straps to their short wooden perches. They look out of place on the ground, sitting idly like chickens at the edge of an open field, cocking their heads this way and that, preening occasionally. Soon though, they’ll take flight, demonstrating their grace and strength. There won’t be any mistaking them for chickens then. These birds are Harris’s Hawks— and they’re regal hunters uniquely suited to the task at hand.

“They’re a really special species,” says Chris Davis, founder and director of New England Falconry. “They’re the only raptor that hunts cooperatively in family groups and as such it makes them smart and flexible and they’re really the bird of choice for providing new handlers. They’ll fly to anybody.”

Falconry, Davis explains, is a hunting sport that can trace its roots back over 4,000 years to when ancient Mongolians first started using trained birds of prey to hunt game. Certainly the sport has changed a bit since then — permits are required and oversight systems have been put in place — but the sport itself remains largely unchanged.

“Just because you’re using hawks doesn’t mean you’re not doing falconry,” Davis says. “There’s a lot of unpredictability and you have all the natural forces of the predator-prey relationship happening, with the falconer’s minimal involvement in any way, just observing that process taking place.”

Davis would know. He’s among an elite class of people with expert-level knowledge on how to train, keep, and hunt with birds of prey— he’s a master falconer, and the first one in the country to offer hands-on falconry education. He’s been a licensed falconer since 1979 and a falconry educator for over 25 years.

Some of the birds, which are native to the American southwest and South America, Davis has bred himself. Others have been acquired from as far off as New Mexico. Despite the unique relationship that he has with his birds, they are far from pets. All of the fifteen hawks he currently has were captive-bred, Davis says, but they were parent raised, which makes them just as wild as if they were raised in their natural habitat. To drive the point home, each bird is known only by a number.

“I don’t name the birds,” he says. “They’re not pets. I don’t want to confuse people. It’s also an additional layer of something I don’t need between me and my experience of the bird. Falconry really in many ways is an active and a passive activity. It’s active, of course, in the training and conditioning of the bird, but its passive in that what we do is hands off. We’re observing the birds and learning from the birds.”

“To them, I’m the guy with the food,” he adds. “To me, they’re fantastic, highly evolved, all individuals, all different. And each one teaches me differently how best to respond to them. They’re all reacting in idiosyncratic ways.”

The youngest, a one-year-old male known as Number 49, hops playfully from his perch, jangling the small bell around his ankle and pulling at his tether. His plumage is still a mottled gray compared to the fiery orange-tinged brown of Number 95, an experienced, steely-eyed 16-year-old who waits patiently— if warily— nearby. He blinks and pivots his head from side to side, as if trying to get a read on the small group of people who’ve gathered on a nearby bench, examining him just as closely.

Isabelle Jenkins, a quiet, bright-eyed seven-year-old in a blue Hello Kitty t-shirt, gazes intently at the hawks. Her legs dangle off the bench, not quite long enough to touch the ground. She’s seated beside her mother, Melissa Perry, and her grandmother, Laura Ringuette.

“Last year, we went to the renaissance fair at UMass,” says Perry. “They had a falconry demonstration and she just totally fell in love with it. She talks about it like every day. When she grows up she wants to be a falconer.”

Jenkins has a long road ahead of her. Becoming a licensed falconer takes years of training. In addition to possession of a hunting license — which requires hunting education classes — she’ll have to be sponsored by a general or master class falconer to guide her through a two-year apprenticeship. After that, she’ll have to pass a written exam and a state inspection to show that she has all the right equipment and an adequate facility in which to house the birds. She’s got a few years to prepare for all that, though— licensed falconers must be at least 15.

Davis releases Number 95 from the tether and the birds jumps to a thick leather gloves on Davis’s left hand. As Davis holds him up, the bird pushes off, and after a few powerful flaps of his broad wings, lands gracefully on a wooden perch. He looks back at the humans as if to make sure they’re following. Content that they are, he pushes off toward an open field, freshly hayed, with a clear view of the Holyoke Range. He finds a shady perch in a nearby oak, with only his bell to betray his presence. Davis lets loose a sudden sharp whistle and the bird glides gently down to his gloved hand. It seems like magic, but it’s the product of meticulous hours spent training and conditioning the bird, a process called “manning.”

“There’s a lot of up-front time in manning the bird and training the bird and then it’s a routine,” says Davis. “It’s a daily routine of weighing the birds, finding what’s called a flying weight: a fit athletic condition with an edge of appetite, individual for each bird, then using that weight in relationship to their behavior to make management decisions … They are definitely athletes.”

Davis returns Number 95 to his perch and releases the lithe, playful Number 49. With the wind at his back and brimming with youthful exuberance and inexperience, the young bird botches a landing on an overhanging limb. He quickly recovers, regaining his dignity.

Davis hands the glove over to Jenkins, still wearing her serious face. Davis produces a little piece of meat from his hip pack, smears it on the glove, and lets out another sharp whistle. This time, the bird swoops in and sticks the landing. He gobbles up the little pink morsel and quickly turns his attention to Jenkins. She meets his gaze, her expression unchanged. She never looks away as the two regard one another for a moment, reaching a silent understanding.

It’s this experience that Davis seems driven to pass on. It’s the same experience he craved as a boy growing up on a farm in western New York state, watching red-tailed hawks circle overhead as they hunted prey far below, longing to understand the majestic and mysterious predators.

“It’s pretty great,” he says. “I certainly wish there had been that opportunity for me when I was that age and interested. It’s great to provide that experience. You never really know where that will go for anyone who comes and what they may do in the future. It’s a way to give people that experience and maybe spark something that will be significant to them throughout the rest of their lives.”

“I think it’s the same kind of thing that a lot of people feel when they come to New England Falconry,” he adds. “There’s an interest, there’s a curiosity, and a longing and I’m able to provide that experience. I completely understand why people come because that’s what my interest was.”