Between the Lines: E-ZPass and the Impending Robot Takeover 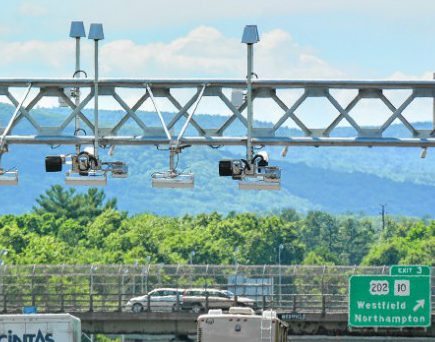 I’m soon going to have to decide if a pull towards convenience outweighs my fear of a total robot takeover of the world as we know it.

I may get an E-ZPass transponder.

The decision should be made simpler by the fact that the state of Massachusetts isn’t giving any of us much choice. Anyone who uses the Mass Pike without one will pay close to double what E-ZPass subscribers pay when new toll system goes live in late October.

Most of the people I’ve talked to about this haven’t seemed all that perturbed, and most of them have E-ZPass already. It’s free, they tell me, and so convenient!

But there are costs.

Whether or not I get an E-ZPass transponder, MassPike “gantries” — glorified sensors and cameras suspended over the highway — will be taking photos of my and everyone else’s license plates as we travel across the state, likely saving that data somewhere. This leads me to question whether these are really just toll gantries, or whether they might eventually be used to issue speeding tickets or as citizen surveillance.

And there are other insidious costs — costs in employment. The system eliminates 400 jobs.

Perhaps we might not object to a tollbooth operator being replaced by a machine in and of itself, but we all know that this is just the latest job to be swallowed up by automation.

At a recent interview with a University of Massachusetts professor of robotics, I was told that scientists are working to automate jobs I’d never expected. I think just to irk me, he told me that he knew of a group of robotics specialists who are looking to automate journalists. (For some reason, he seemed to be confident he would never be replaced by a machine, however.)

For about five seconds, I daydreamed about a world in which no one would have to work and everyone lived in harmony. But then he told me that engineers were also looking to create robot musicians who could replace humans — no more harmony, just robot harmony.

And then he dropped the biggest bombshell of all: automated weaponized robots. Um … I think I’d like it if humans kept some autonomy there. We’ve all seen (insert your favorite robot dystopian film here); we should know better.

If I don’t get an E-ZPass — forcing the state to employ an arduous process to mail me and other E-ZPass eschewing deviants our toll bills — will that stop a robot takeover of the world? I may just have to find out … for the sake of humanity.

Dave Eisenstadter is the Advocate’s web editor. You can contact him at deisen@gazettenet.com.