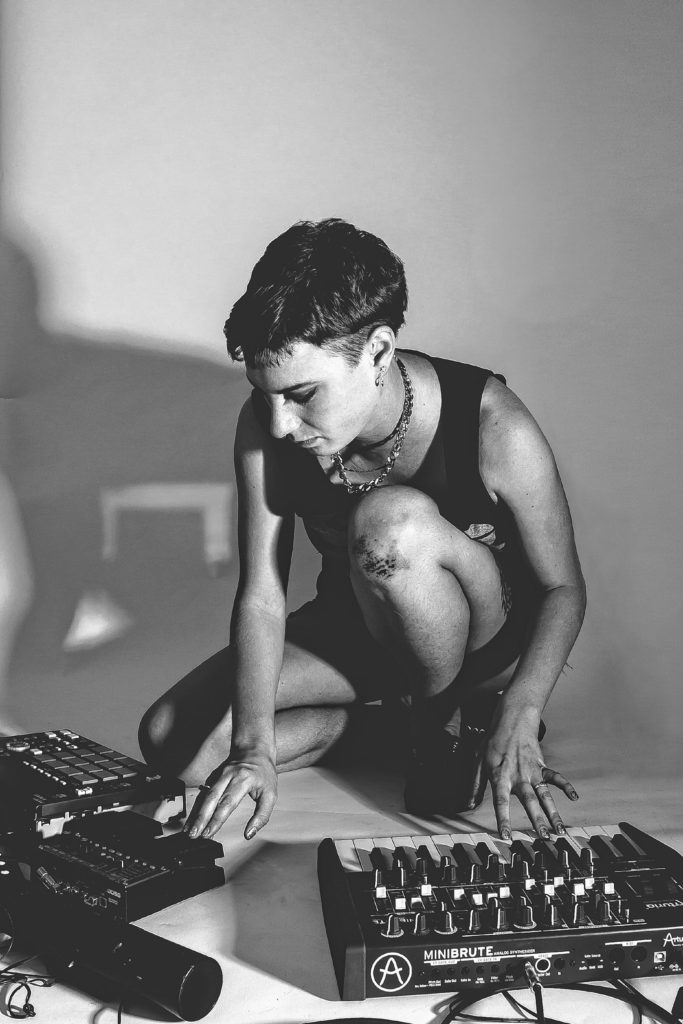 It’s an amazing feeling to bear witness to art you feel moved by — especially when that art is ephemeral. And it’s no less amazing to see a side of someone that you didn’t even realize existed. This is what happened when I first heard Pussy, a self within my old friend Finley Janes, who performs under the monkier PussyVision.

We all walk around with different selves inside of us, and some of us wear different selves on our sleeves, some of our selves are consciously repressed, while others poke their heads out sometimes. It certainly isn’t a stretch to think that many of us don’t know ourselves fully — that we’ve often only seen the tips of our own icebergs. We talked a lot about where Finley ends and Pussy begins, though I’m not totally sure, and I’m not sure if Pussy really knows either.

“Pussy is an alter-ego, but she is myself,” Janes tells me. “The part of myself that is losing, that is scraped away at, making self-conscious decisions. And has, instead, replaced that [with] making music or art.”

I caught PussyVision’s recent set at Jane Doe Jr., a living-room like space above the John Doe Jr. record store in Greenfield. The audience was sprawled out on couches and listening carefully when I walked in late. Pussy had started her set. A power-drill like noise created a drone. What sounded like a digital woodchuck started small and built up. The first ten minutes or so were eerily repetitive. “I’m interested in reeling people in with something that feels catchy, but then pulling them down and apart, holding one sound, one rhythm. It’s so devotional feeling, you’re so in that moment,” Janes tells me. “You are so present in yourself, but also so aware of what’s going on outside of your body. You’re not introspective and you’re not outside of your body, you’re experiencing something in your own mind as you’re taking it in.”

That feeling of somebody else describing to you exactly what you’re feeling is a mindfuck in and of itself. Because that is exactly what the beginning of the set felt like, both when I saw it in person, and later when I watched Sam Hadge’s video recording.

The set built on what I later learned was a loop pedal, drum machine, and synth, creating a cacophonous soundscape that might be interpreted as nature battling industry — an overgrown industrial neighborhood being hostilely taken over by plants and birds, yet still sonically bouncing off the ruins of a former self, serving an ecosystem rather than a financial one.

“It’s amazing to me that I’m making music because I’ve wanted to make music forever,” Janes tells me. She described growing up dabbling with guitar in her bedroom or piano as a singer-songwriter, but sparks weren’t igniting. In college she knew musicians, though mostly men, and never quite collaborated. She told me she felt a barrier due to gender. “Something around music — and I know it’s so gendered — made it feel like men knew way more than me and made me feel like a fool. And we were all really self-conscious because putting yourself out there is really hard. Making art can be so hard and so vulnerable.”

It wasn’t until a friend asked her to play a Halloween party with 10 other noise artists that she borrowed some gear and started making moves. From that point on, a gear obsession developed (a common ailment for many musicians), and Pussy found herself devouring countless hours of YouTube videos and reviews, trying to find the perfect synth, and the right chorus pedal, a reliable microphone. While buying and selling many pieces of gear, she practiced like crazy, and only feels like now, a year later, that she is settling in.

And she is indeed settling in. That’s why it was so surprising when Janes told me that “I didn’t know I was going to start performing … It never was my goal to be, like: I’m going to get really into music and play.” Instead, she reminds me that she studies gender and racial politics, and gives workshops on those subjects. “That’s my jam,” she says. That said, she hopes to continue working on PussyVision, and evolve from free-form noise to potentially more structured songs.

The Greenfield set climaxed as the beat grew stronger and more defined. Pussy added vocals, creating layers of “I could be better,” and then “no,” and then “fuck that.” She explained that the set came from this feeling of “invalidity” — feeling invalid making music. And then Pussy’s body language changed from nervous and reserved to jumping up and down, moving around, gaining the courage to say: “Fuck that! This is my space.”