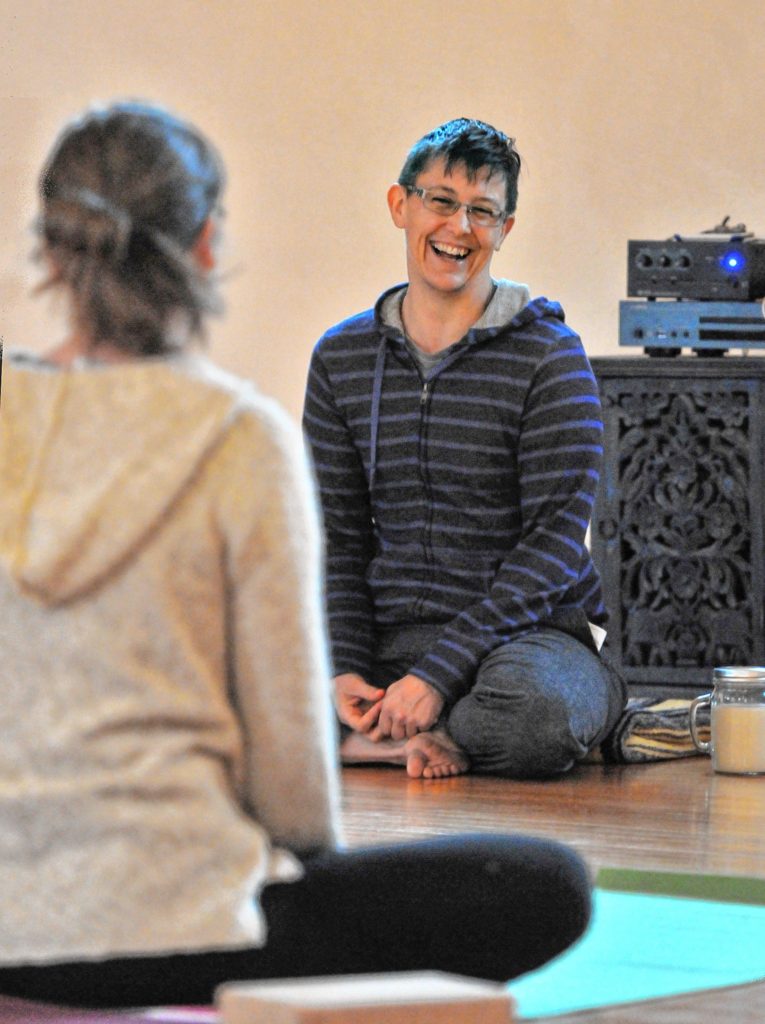 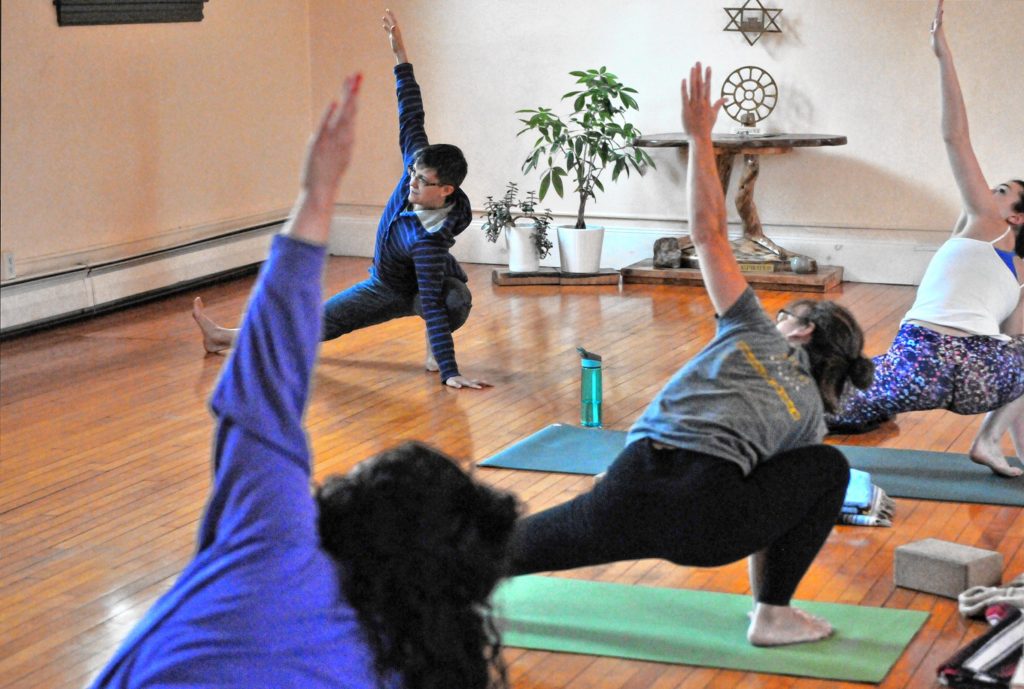 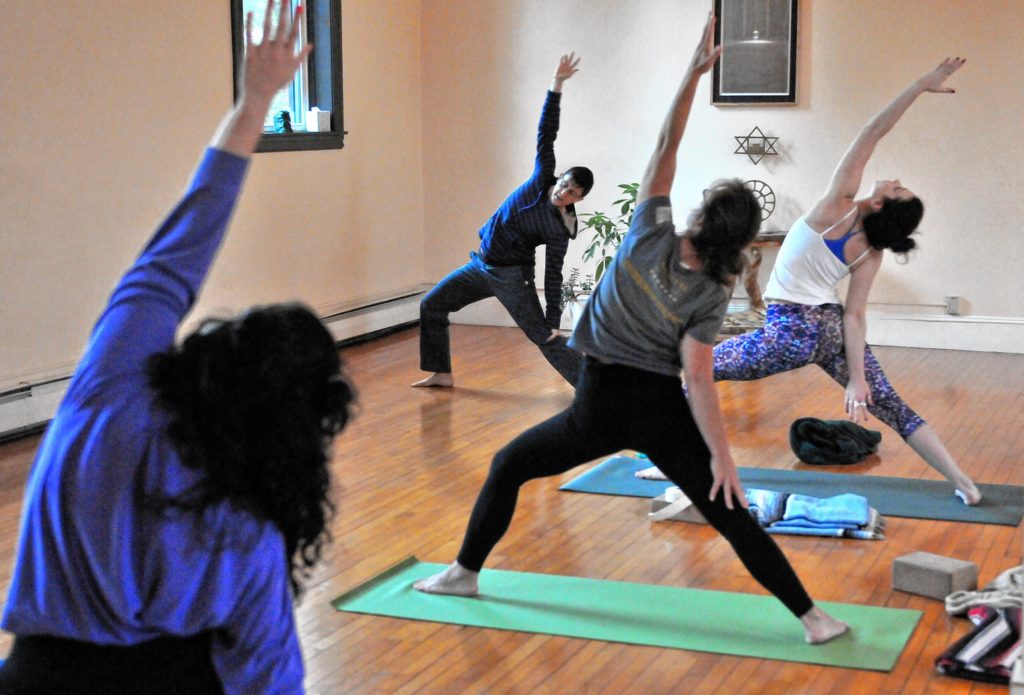 Whether he’s working with homeless veterans, prison inmates or queer and trans people in his yoga classes and buddhist teachings, Jacoby Ballard emphasizes the struggle is “part of the journey.”

“There’s actually beauty that you have to offer because of that path,” he says.

Just as he made his way to western Massachusetts, Yoga Journal awarded Ballard with the “good karma award” for his work with trans and queer communities, a subsequent prize since the organization gave him the “game changer award” in 2015.

Many may get into yoga to do headstands, he says, but that’s not what’s it’s ultimately about.

For him, yoga is about integrating mind, body and community. Oppressed peoples are where they are for a reason, he says, and society at large is complicit in that.

“It’s the work of yogis to stop homelessness, to stop deportation, because that’s the work of nonviolence,” he says. “None of us can be free unless all of us are free.”

Ballard, 36, says he found a profound sense of focus when he began meditating in high school. Later, in 2003, it was yoga that helped him come out as trans.

“That points to the self-reflection and awareness that has always been part of the magic of yoga,” he says.

He’s seen a lot of minds change around queer and trans communities, but Ballard says it’s not all sunshine and rainbows.

“While there’s been positive change,” he says, “I resist the progress narrative.”

He says queer and trans people are taking more of a leadership role in social justice movements because, just by existing, they’ve already had to have to difficult conversations.

“We’ve gotten good at telling the truth even when it’s hard, because we’ve had to do that for ourselves.”

That’s why Black Lives Matter, he says, is so heavily run by trans and queer women of color.

“They can’t not realize all these things about society,” he says.

Because yoga is a peaceful practice, Ballard says, some teachers make the mistake of suppressing the anger felt by students in oppressed communities.

“I validate their anger,” he says. “Anger is an emotion that arises when something is wrong, and it’s important to listen to, to let the emotion run through you.”

Still, he says, it’s important to pause and to let it pass before addressing it outwardly.

“If you speak or act when you’re in the heat of the moment, it’s going to harm your cause,” he says.

Ballard is conscious of the music he plays, the words he chooses and the adjustments he makes in his efforts to create a more inclusive environment in his yoga classes.

He reads the room to get a sense of who’s feeling welcome, who isn’t.

He’s more attune to these details, he says, because there was no such safe space for him.

“I had to create it — It’s that space I was craving eight years ago,’ he says. “It’s been this really interesting healing spiral.”

Much of the yoga at the time, he says, had an alienating “corporate feel” to it. It lacked a higher level of awareness.

“It’s not about the postures, it’s about who we are being in our lives,” he says. “So it felt a little bankrupt to me.”

And simply being himself landed him hostility from fellow yogis, some of whom kicked him out of changing rooms.

“As a trans and queer person I didn’t feel welcome,” he says. “There was no one like me.”

Since then, Ballard has made a point to forge new spaces for those formerly left on the sidelines.

“I feel like there’s a way to be really intentional about bringing more people in,” he says.

That’s why he’s teaching queer and trans yoga at Yoga Center Amherst and Eastworks Yoga to send a message that “yoga is for you,” and to provide “a place where you can come cry on your mat and know the person next to you is crying for the same reason.”

“Creating that space in just a 1-hour yoga class can have a really profound effect,” he says.

Ballard says he doesn’t offer a “pinnacle pose” in his classes, but instead emphasizes trying on a yoga pose “just like a pair of pants.”

“They’re never going to look the same on any two bodies.”

He was recently joking with friends, he says, about how he’s no longer an outsider, that his ability to quickly earn teaching positions at several local studios shows his work has moved more toward mainstream.

“Yoga communities are shifting,” he says. “That’s what I’m here for.”