Brace Yourselves: Nostalgia is Coming 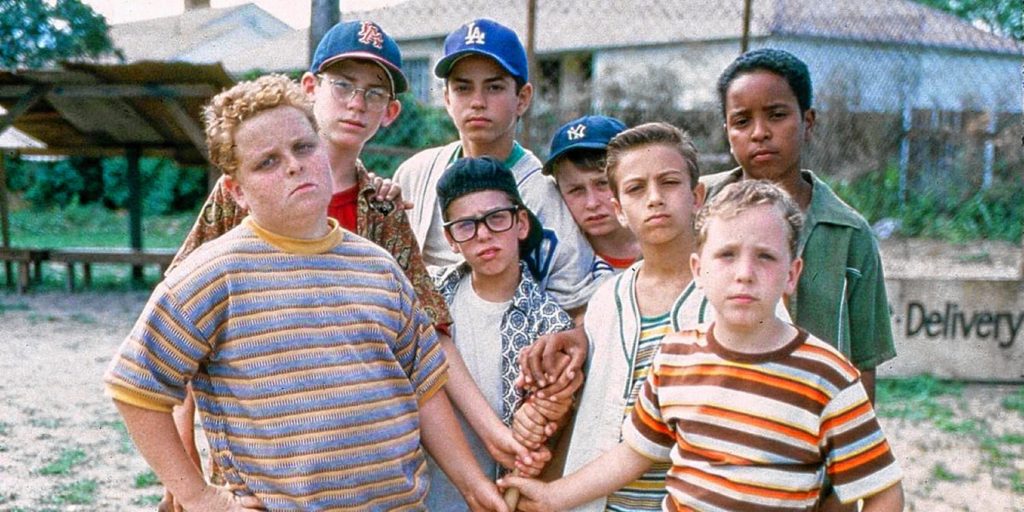 Now that I spend a good five minutes a day sweeping dry leaves out of our back entry, I think it’s safe to finally say it: autumn is upon us. And I’ll take it, dry leaves and all. Nestled between the smothering humidity of our summer and the desiccating chafe of winter winds, autumn in New England — and especially in the Pioneer Valley — is a perfect restorative, filled with the explosive colors of natural beauty but also with a calming crispness that seems to clear the mind as much as the air.

With autumn come other annual traditions: schools starting up and daylight winding down, apple picking and hayrides. This week, two films come to the area to explore a couple of classic fall pastimes: Thanksgiving with the family, and baseball.

Both films will appear at Amherst Cinema for the Monday holiday. First up to bat is director David M. Evans’ 1993 nostalgia piece The Sandlot, screening at 1 p.m. as part of the theater’s Family Films Series, which offers a $5 general admission. Set in a well-scrubbed early 1960s, it follows a group of boys who come together to play baseball on their local sandlot. When one of the local kids ruins the gang’s last ball, newcomer Smalls offers up one from his stepdad’s collection — not realizing that it is signed by Babe Ruth. In short order, the ball is hit over the sandlot fence and into the yard of The Beast, an enormous dog that has become the subject of some lurid local lore.

As a plan is hatched to retrieve the ball, the kids unwittingly embark on an adventure that will come to change all their lives. Compared in the past to a summertime version of A Christmas Story (it has a similarly homey narration), Evans’ film is unabashedly warmhearted in a way that, in clumsier hands, would simply come off as corny. And the truth is, it is a little corny, but it’s good enough that we don’t care. If you or your youngster is prepping for the World Series at the end of the month, The Sandlot makes for a nice warmup.

Later on Monday, director and Amherst native Rafael Monserrate will be on hand for a 7 p.m. screening of his dysfunctional family comedy The Dissection of Thanksgiving, after which he will participate in a Q&A alongside writer-actor Troy Hall, actor Deshja Driggs-Hall, and producers Mridu Chandra and Gene Miller. The 97 minute film, which stars Oscar nominee Kathleen Quinlan (Apollo 13) and Jay O. Sanders (HBO’s True Detective; Half Nelson), centers on the marriage of Cliff and Carol Morgan. Gathering their three grown children at their local Chinese restaurant on the night before Thanksgiving, the pair announce that after three decades of marriage they have decided to divorce.

While the kids — struggling late night DJ Robby, his hypochondriac brother Charlie, and their adopted sister Brooke — try to process this bombshell in their own ways (when divorce rears its head, even the most grown-up of grown-ups can feel like a kid again), the family as a whole tries to spend the holiday with as much civility as they can muster.

Also this week: Two films coming to local Cinemark theaters look to take viewers on a ride. First up is Tate Taylor’s (The Help) new film The Girl on the Train, a Rear Window-style thriller based on the runaway bestseller by British author Paula Hawkins, in which a recently divorced commuter (Emily Blunt) whose daily train passes by the home of a seemingly perfect couple (Haley Bennett and Luke Evans). It’s a passing moment of sweetness and wish fulfillment for the hurting Rachel — until the day comes when her passing glimpse catches something unspeakable. Did she see what she thinks she saw? And if so, can she get someone to believe her before it’s too late?

And on Sunday and Wednesday, the theater brings in the classic George Lucas film American Graffiti. Set in early-60s California (“Where were you in ’62?” asks the poster) it revolves around a group of teenagers cruising the main drag as summer vacation brings the first hints of true adulthood into their lives. Groundbreaking at the time for its use of mostly current popular music in its soundtrack, it lives on a bit overshadowed by Lucas’s connection to Star Wars. But for the one time racing-driver hopeful, American Graffiti may well be his most heartfelt film.