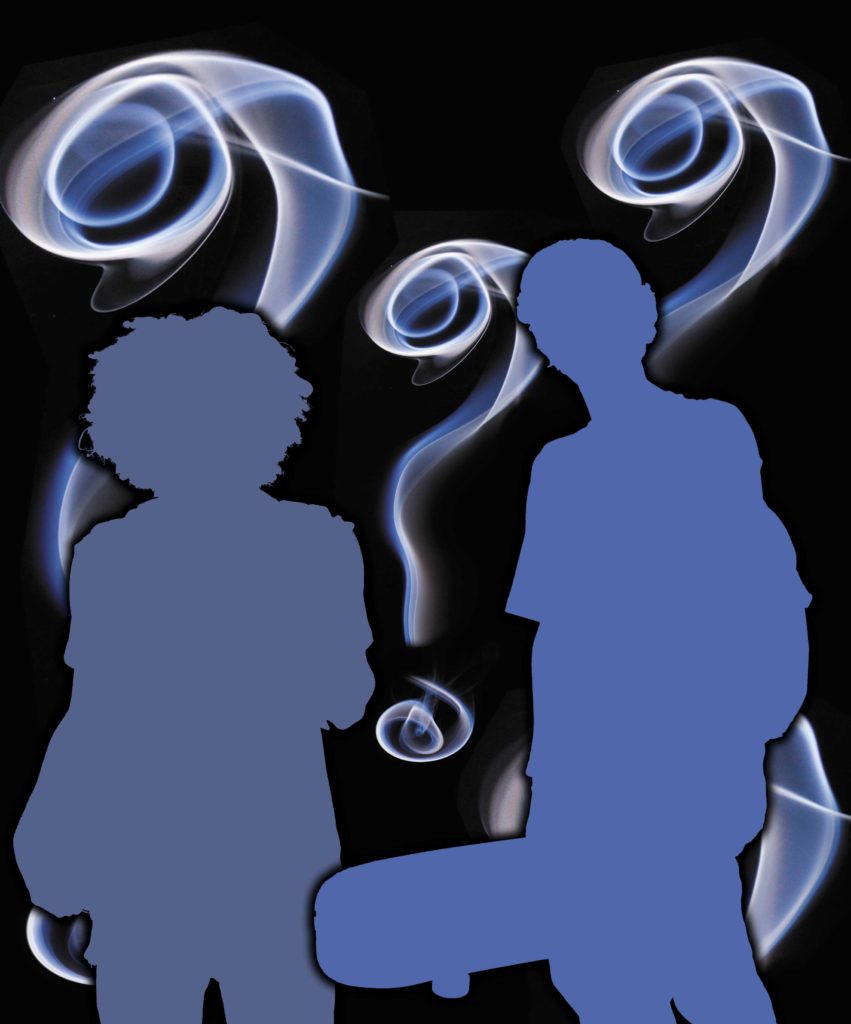 Rachel Desmond had her first smoke when she was 16. For the next six years, marijuana was a big part of her life.

“It was easy to get,” she says, sitting outside of the Frost Building at Holyoke Community College, where she is studying. And she says she needed it to deal with some hard issues.

“I had to talk, but I held in so much from my childhood,” said Desmond, 25, of Agawam. Growing up, her home life was difficult. There were often problems boiling beneath the surface, but they were rarely addressed.

“A kid absorbs a lot, they notice,” she said. “I couldn’t help my parents in an emotional way — you know kids, always trying to make things better — so I felt worthless. I gave up.”

Smoking weed helped Desmond deal with the daily strain and pressure she felt, she recalled. Until it didn’t.

When Desmond was 22, the marijuana started giving her panic attacks. She wound up in a psychiatric ward. The weed was messing with her mental health.

“You don’t know what chemicals are in marijuana and I was smoking too much,” she said. “They say marijuana can awaken mental illness and for me, that’s what it is.”

“I think it should be [legalized], most definitely,” Desmond said. “People use it instead of going to a psychiatrist; they can try and medicate themselves. Marijuana is natural. I got fucked up on marijuana, but for other people, I totally get it.”

If the measure is approved, Massachusetts would join Alaska, Colorado, Oregon, Washington, and D.C., in legalizing recreational use of cannabis for people aged 21 and over. The measure would create a 3.25 percent tax on the sale of recreational pot, in addition to the standard state sales tax and a 2 percent tax that municipalities could choose to add.

Additionally, lawmakers could choose to set limits on the potency, quantity and forms (including edibles) of marijuana available for purchase. They would also likely grapple with law enforcement questions such as how to detect and punish impaired driving.

If the measure is voted down, Massachusetts’ marijuana laws won’t change: possessing small amounts will continue to be considered only a civil offense and medical marijuana will still be available to people with a card from the state. Medical weed is currently tax-free and would remain so whether or not recreational use is approved.

As the election draws near and Massachusetts residents consider whether people should be able to buy pot from a regulated and taxed retailer, a big concern among voters is how legalizing marijuana could impact a vulnerable segment of the population: teens and young adults like Desmond.

Opponents of Question 4 say more marijuana in the state will lead to more use among teens and young adults — opening the door to abuse and hindered brain development. Between aggressive advertising, the availability of gummy bears and sodas made with weed, and kids seeing adults they respect lighting up, they fear that more youth will try marijuana.

“When you walk around Colorado there’s just so much advertising and that’s not only seen by adults,” said Dr. Sion Harris, co-director of the Center for Adolescent Substance Abuse Research at Boston’s Children’s Hospital. “We have plenty of experience with underage alcohol use to know that it is very hard to really keep the lid on.”

Legalization supporters say that regulating marijuana and moving sales from the streets to legit shops will make it more difficult for young people to obtain pot. They also say that tax dollars raised through marijuana sales could benefit youth outreach and treatment programs.

“When you strip away the scare tactics and think about what poses the most danger to teens, it’s availability and lack of inspection of product,” said Jim Borghesani, communications director for the Campaign to Regulate Marijuana Like Alcohol, a pro-legalization group. “Regulating marijuana will address both of those problems.”

Meanwhile, many young adults say they don’t think legalizing marijuana will have any impact on how much teens smoke.

“People who do it are going to still do it, they’ll just be getting legal stuff, better stuff,” said Justin Lafreniere, 18, of Chicopee. “It’s already everywhere; legalizing it won’t make it easier or harder to get.”

Legalizing pot could make it easier for young people to obtain it from an over-21 purchaser. And as the sight of people smoking and consuming other forms of marijuana became more common, Harris fears that normalization would lead to increased addiction.

By and large, said Harris, when teens hooked on pot come into the adolescent center for marijuana substance abuse, the kids say they don’t have a problem.

Proponents argue that marijuana will be more difficult for underage people to obtain if it is legalized and regulated.

“A street dealer isn’t going to say, ‘Let me see your ID,’” said Borghesani.”With this system, a regulated and taxed system, it will be safer for teens than it is today.”

The HCC students said if recreational marijuana becomes legal, there will be young people who abuse it, but that may not be enough of a reason to keep the prohibition in place. Two of the people interviewed said they used to smoke a lot of weed, but quit when it exacerbated their mental health conditions. Everyone said cannabis is incredibly easy for young people to get.

“I feel like we should pass it, but we shouldn’t,” said Alondra Jimenez, 17, of Holyoke. “People will take advantage of it if you legalize it. I’d say people will be able to get it faster than before, but it’s like they already do it. I don’t think legalizing it will make people want to do it more, though.”

Jessica Genereus, 18, of Belchertown, said she’s in favor of marijuana for medical use, but not for recreation. She said legalizing weed for partying purposes would encourage younger people to get stoned.

“If younger kids see older kids do it, they’re going to want to do it,” she said.

Many students said if people want to smoke marijuana the government shouldn’t stand in their way.

Tacheron was talking about the raid on 81-year-old Margaret Holcomb’s Amherst home in September. Holcomb had one marijuana plant growing outside, which was spotted by a military-style helicopter flying on a weed eradication mission. Holcomb said she was growing the weed to help with her arthritis and glaucoma, but she did not have a state medical card.

“This is a waste of time and money persecuting a natural plant,” Tacheron said. “Already three states have it, more will, too. It’s just common sense.”

In Colorado, where marijuana was legalized for recreational use in 2012, the rate of teens smoking pot has not increased. In the last two years, marijuana use has remained flat among students in middle and high schools, according to the Colorado Healthy Kids Survey.

Ali Maffey, a spokesperson for Colorado’s Mental Health Promotion Branch Prevention Services Division, cautions that two years of study don’t make a trend, but the state has implemented a number of programs in an effort to keep weed from appealing to people under 21.

“Legislators, workers, and regulating agencies worked together to apply the lessons learned from alcohol and tobacco — policies that keep these substances out of the hands of underage users,” Maffey said in a telephone interview.

Among Colorado’s tactics are:

Keeping the price of marijuana high through taxes so that price is a deterrent.

Maintaining steady pressure on the black market through law enforcement so that less marijuana will be sold on the street.

Strict ID checks for consumers at the entrances and cash registers of marijuana retailers.

Educational campaigns that emphasize marijuana may be enjoyed by people 21 and up, but it is not okay for people who are underage.

Maffey said the social norms campaign encourages parents to have conversations with their kids about marijuana. She said when parents talk to their kids about drugs and tell them why underage use is bad, the child is four times less likely to use marijuana.

“We found that we couldn’t make a campaign for youth that felt authentic, we couldn’t come up with something they were willing to hear. But young people do want to have a conversation about it, so we’re asking the parents to do that,” Maffey said.

The increased money for afterschool and mentoring programs is the state’s way of keeping students in contact with adults who can teach them how to make healthy decisions, Maffey said. The money for all these programs is provided through Colorado’s weed tax.

The prospects for Question 4 remain hazy. The most recent survey by UMass Poll said that 51 percent of registered voters surveyed support legalizing fun times with weed — while 40 percent said they would vote against it.

Whatever the outcome, the rate of marijuana use among teens is likely going to stay the same: high. With a quarter of high school students saying they are currently using cannabis; perhaps the question shouldn’t be: Is legalized weed good for Massachusetts’ young people? Instead, the question should be: Why are Massachusetts’ young people smoking so much weed?

If you ask Rachel Desmond, who smoked weed from the age of 16 until it started giving her anxiety at 22, the answer is simple: “People stress out and marijuana can help that.”

But weed has limits that people need to recognize, she says. “I used to reach for that best high with marijuana and I couldn’t reach it, my heart and my head weren’t connected … I was just living, but I wasn’t alive like I’m living today.”