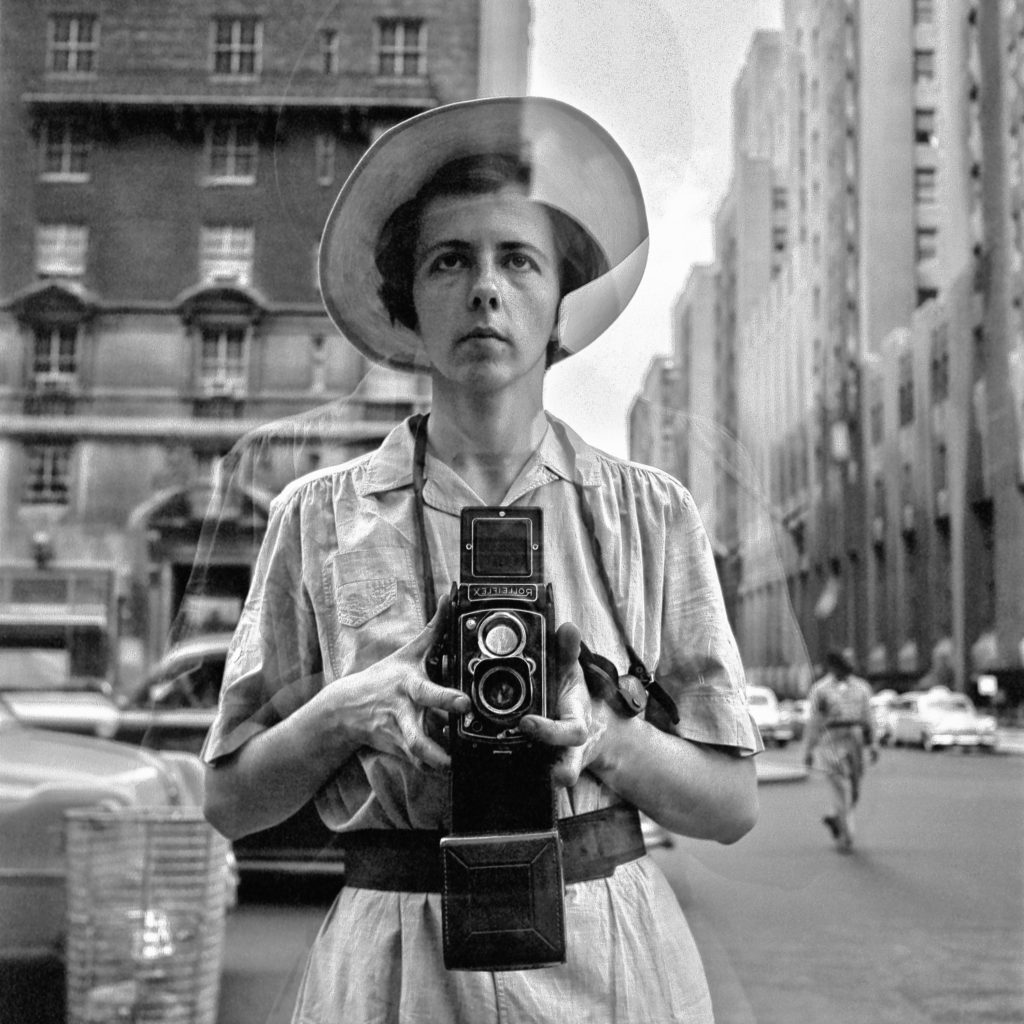 A lifetime ago — maybe two lifetimes now — I was an art school student. I was a hard worker but probably too concerned with what others thought of my work, and even then I knew that was a problem. That feeling seemed confirmed by the work being done by a classmate of mine: a shy, unassuming young woman who flew so far under the radar that she was skimming the grass. Her art — when I finally got to see her most honest work, and not only what she brought to class — was a revelation, and such an open outpouring of herself that I felt almost ashamed at my own more mannered drawings.

That old feeling was brought back to the surface the moment I first saw the trailer for Finding Vivian Maier, a recent documentary by directors John Maloof and Charlie Siskel that comes to Amherst Cinema this Thursday for a 7 p.m. screening. Now seen as one of the 20th century’s greatest street photographers — she is ranked with everyone from Bill Cunningham to Diane Arbus — Maier, in her day, was something far more prosaic: a nanny, who “lived on the third floor, in our attic,” as one bewildered interviewee recollects. She didn’t exhibit her work, and few people, if anyone, knew that she was so dedicated to her craft.

Maier’s rebirth began when Maloof bid at an auction on a box that contained thousands of Maier’s old negatives. He won the auction for a few hundred dollars, then forgot about the negatives for a while. Eventually, he scanned a hundred of them and uploaded them to Flickr, which led to a more widespread admiration of her work. When she died in 2009 with no heirs — it turned out that Maier was still alive when Maloof made his initial discovery — the director was spurred to dig deeper into her story. The resulting film — in which we hear Maier describe herself as “sort of a spy” — is a reminder that art is all around us, and that the most inconspicuous people may contain the greatest depths, if only we take the time to plumb them.

Also at Amherst this week (Sunday at 2 p.m.) is The Day the Earth Stood Still, the first film in the Out Of This World: Classic 1950s Science Fiction Movies series. Robert Wise’s 1951 classic about an alien invasion was less xenophobic than you might expect: instead, his aliens come to us to warn humanity about our own violent tendencies. Keep on the path we’ve forged, says the alien Klaatu (Michael Rennie), and our planet will be reduced to ash. What follows is largely an indictment of our own reactionary ways.

As part of the series, Nina Kleinberg will build on her popular “Film School” talks in a half-hour introduction to each film. Topics this time around will include early sci-fi films, the American relationship with science during the Atomic Age, and our country’s fascination with UFOs. Following the screening, Kleinberg will talk about how the censor board altered Wise’s film, and how the hidden themes of the film enrich its meaning.

Also this week: It’s hard to believe, but Martin Scorsese’s Taxi Driver is celebrating its 40th anniversary. To mark the occasion, Sony is bringing the picture back to the big screen for a special two-day event featuring a Q&A with the cast and crew. If like me you sometimes find it hard to reconcile today’s Robert De Niro (the title of his recent Dirty Grampa says a lot) with the De Niro of The Deer Hunter, Raging Bull, and The Godfather Part II, then a bit of Scorsese’s great film will go a long way to reminding you of what a talent the actor has. De Niro stars as unstable cabbie Travis Bickle, looking to clean up what he sees as the decadent perversions of New York. His performance is legendary, but also look for the richness in the supporting roles: Jodie Foster as the young prostitute Iris, Harvey Keitel as the pimp Sport, and especially Peter Boyle as fellow cab man Wizard. It screens at local Cinemark theaters on Sunday and Wednesday.