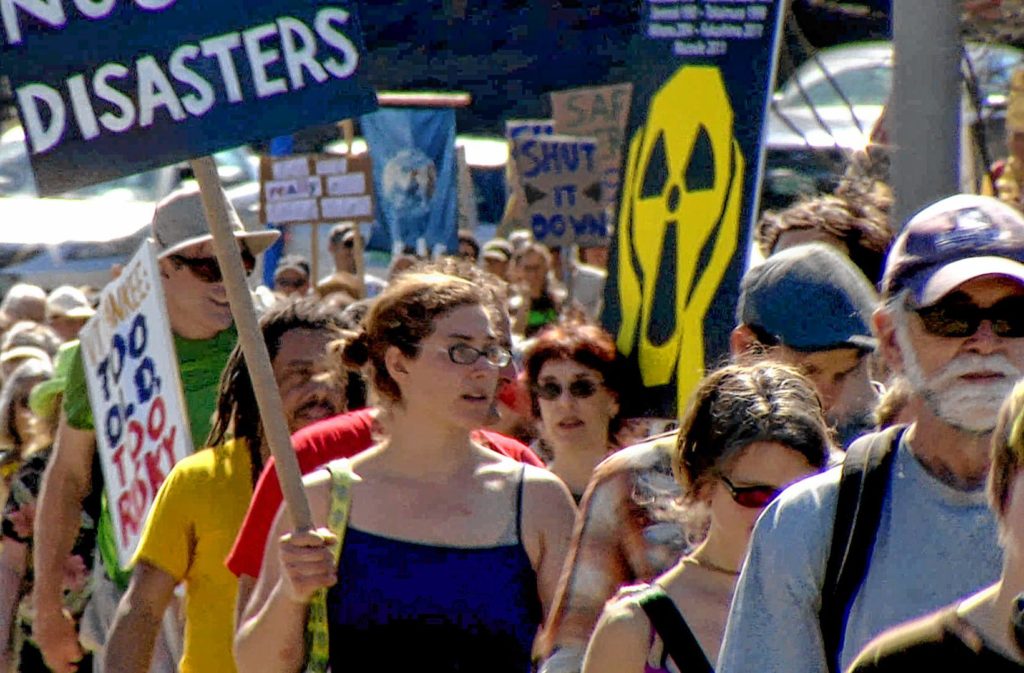 Live in the Valley for any length of time, and you’ll soon know of Frances Crowe. The diminutive white-haired woman is something of a local celebrity, thanks to a life spent in activism, where her infectious cheer is matched by her uncompromising (and equally infectious) commitment to living an ethical life, and to calling out institutions that promote conflict, oppression, or harm. At age 97 — and after who knows how many arrests — the pacifist and advocate is prominently featured in a new documentary film.

Power Struggle: The Vermont Yankee Story comes to the Academy of Music in Northampton for a sneak preview screening at 2 p.m. Sunday that serves as both a fundraiser for a future film tour and as a tribute to Crowe’s longtime work on the frontline of the movement for peace and justice. The latest in a line of social justice documentaries from Western Massachusetts filmmaker Robbie Leppzer — his An Act of Conscience previously premiered at the Academy back in 1997 — Power Struggle focuses on the effort to get the aging Vermont Yankee power plant shut down in the face of ever more alarming safety violations.

Filmed over a five-year stretch, the film follows the grassroots campaign led by people like Crowe, nuclear engineer Arnie Gundersen, and Vermont governor Peter Shumlin. Timing their efforts to coincide with the expiration of the plant’s original 40-year license, their David and Goliath story would grow to include concerned citizens on both sides of the Mass/Vermont border (the plant is 35 miles from Northampton). In the end, that story would end with the plant getting closed down for good — proof that, even in an era when it seems that big business routinely gets it way, the smaller voices, when they shout together, can still be heard.

About 40 miles from Northampton is the town of Pittsfield, where the Berkshire Museum’s Little Cinema has been screening a carefully curated slate of independent and foreign films for some six decades. If you’re getting tired of the “dinner and a movie” dance, the museum, founded in 1903, houses an eclectic collection that includes both an Egyptian mummy and a gigantic meteorite.

This week, they bring in One More Time, the story of the struggling singer Jude (Amber Heard) and her rocky relationship with her wealthy father Paul (Christopher Walken), an old crooner who is angling to make a comeback. When she is evicted from her city apartment, Jude lights out for the Hamptons, where Paul lives in semi-retirement. It’s telling of the gulf between father and daughter that when his homeless daughter arrives on the scene, Paul denigrates his own digs as the “slums of the Hamptons,” and complains that it’s on the non-beach side of the road. Together — maybe — they can help each other overcome their own worst tendencies.

The Little Cinema also brings in a classic in the lead up to Halloween, screening Alfred Hitchcock’s Psycho on Friday and Saturday night. The tale of the strange motel manager and a woman on the run has been a gateway to the horror genre for generations of filmgoers, and for good reason. Few directors have Hitch’s skill in building so much suspense with so little violence. See it once, and you may never look at chocolate syrup — the special effects department’s secret weapon—the same way again.

And for a look at what the legacy of Psycho would bring, check out the Sunday and Wednesday screenings of The Shining, which screens at area Cinemark theaters in Hadley and West Springfield. A modern masterpiece of psychological horror from Stanley Kubrick and Stephen King, the story, like Hitchcock’s, relies more on our own creeping dread than on any pop-up piece of schlock or shock.