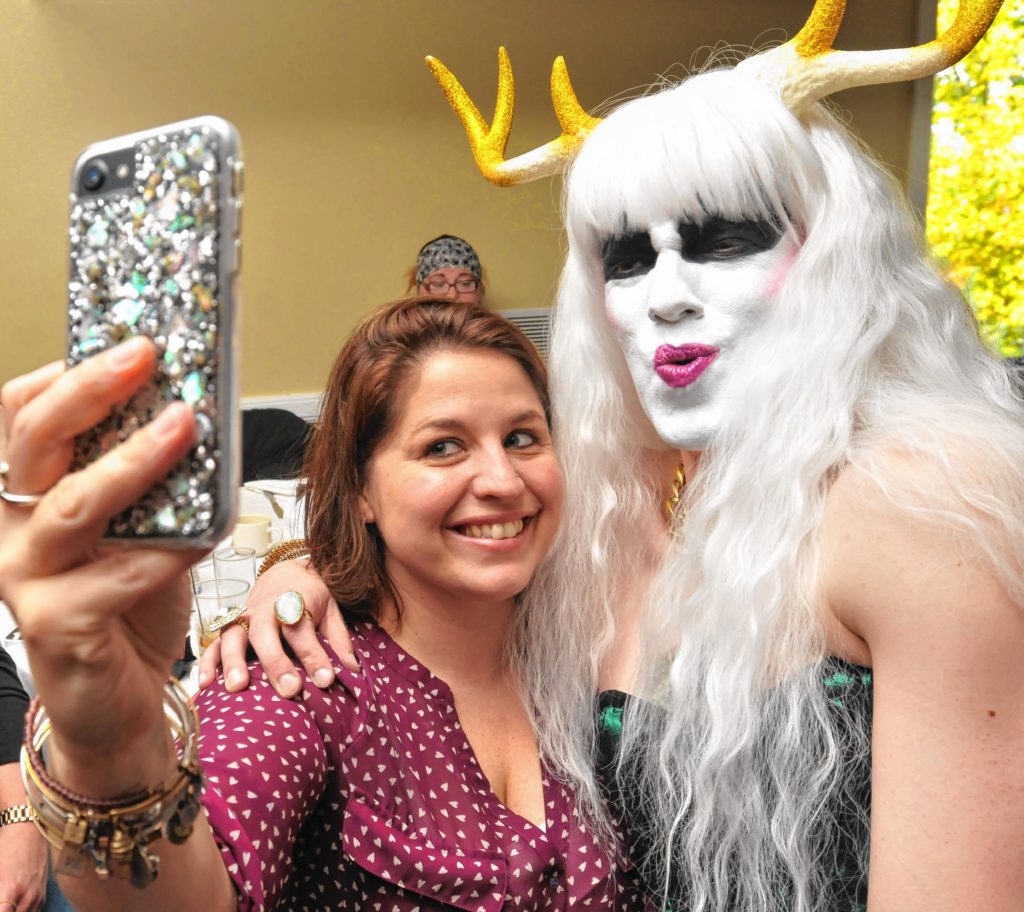 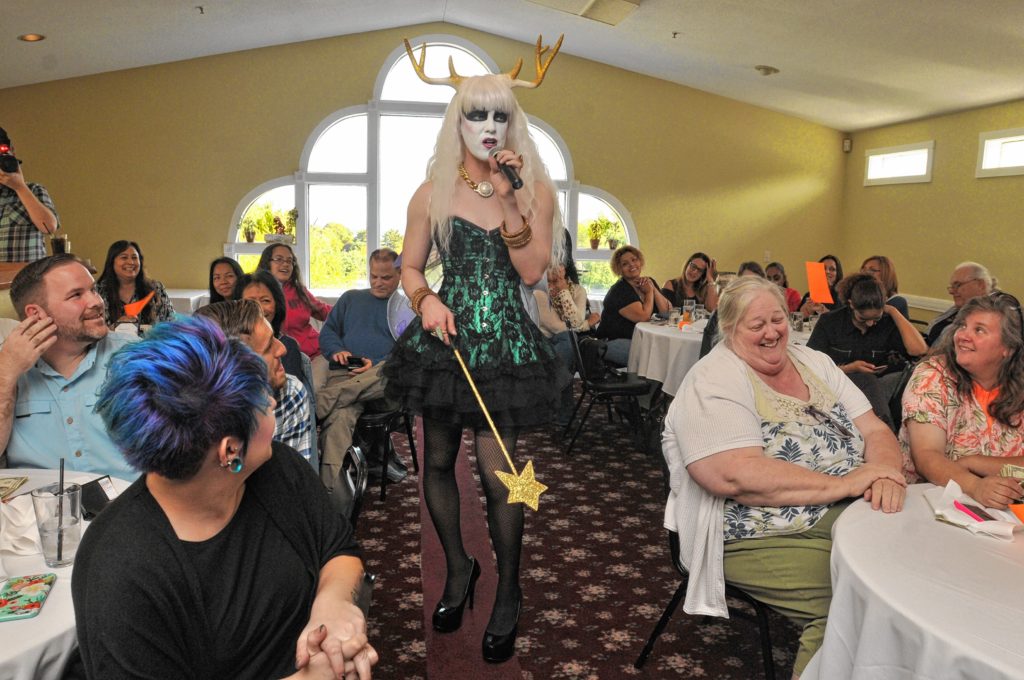 Hors D'oeuvres introduces the next performer at Drag Brunch at Slainte in Holyoke. Carol Lollis photo. 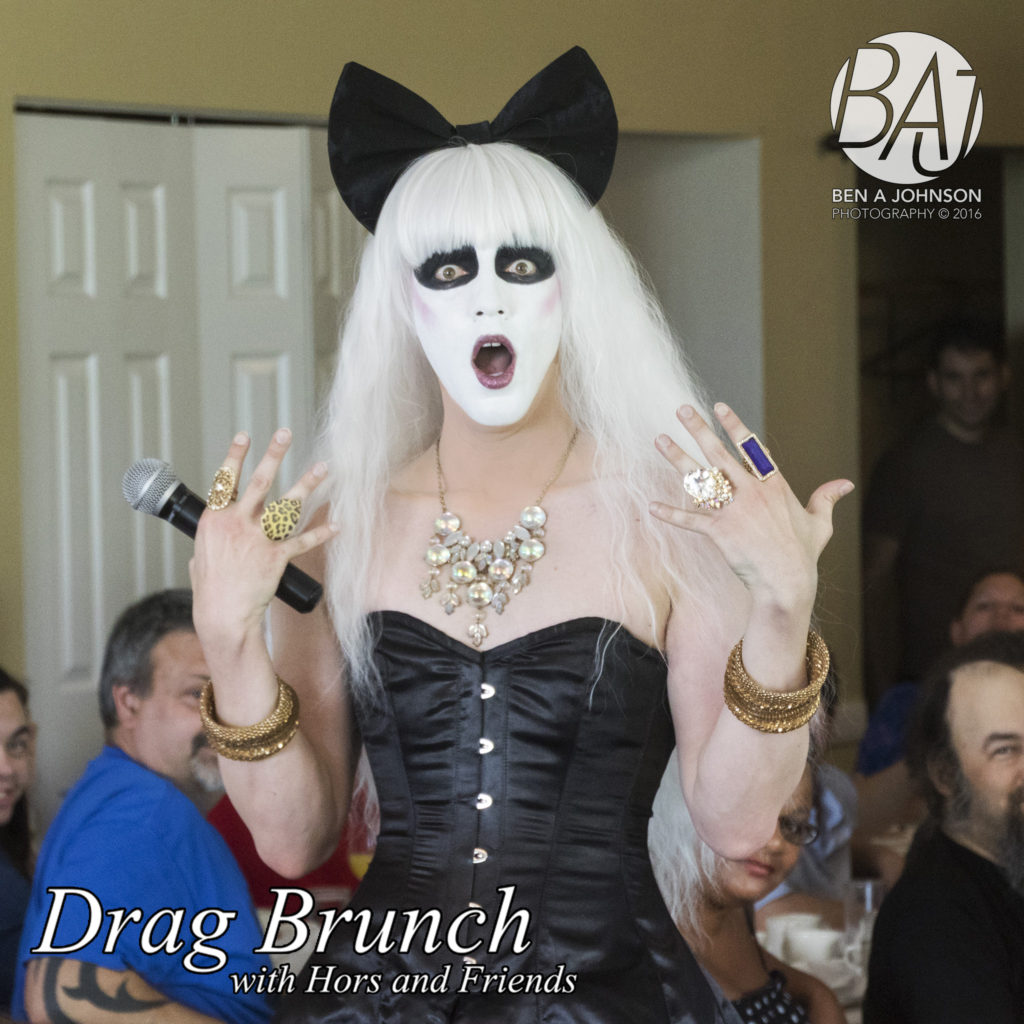 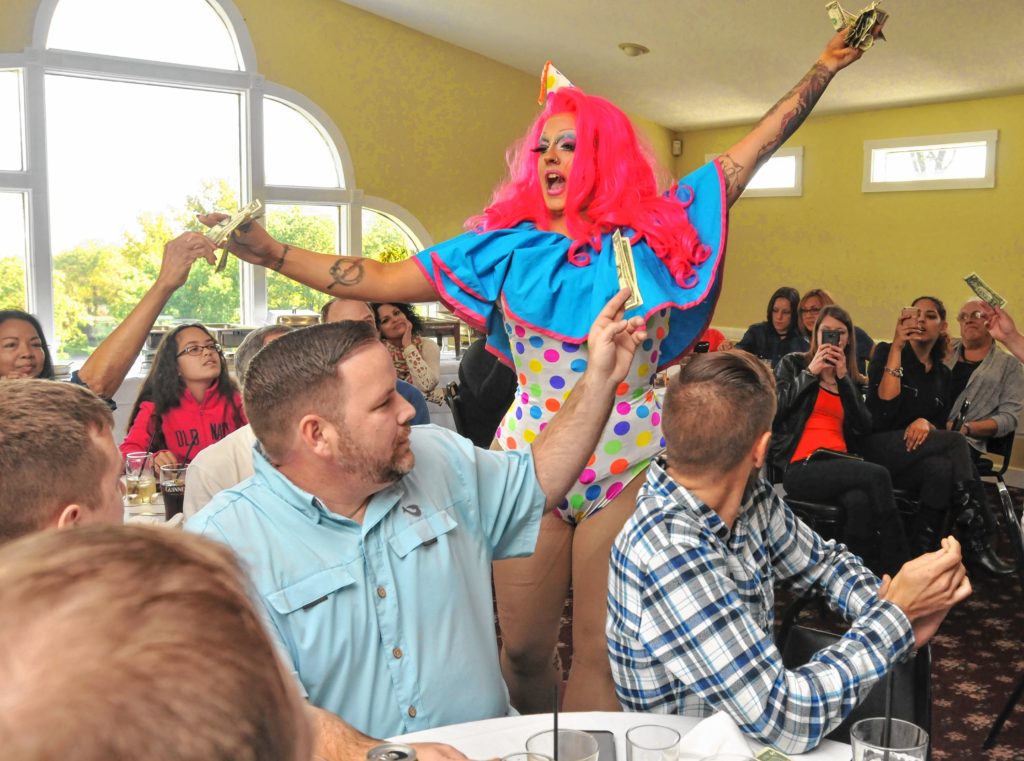 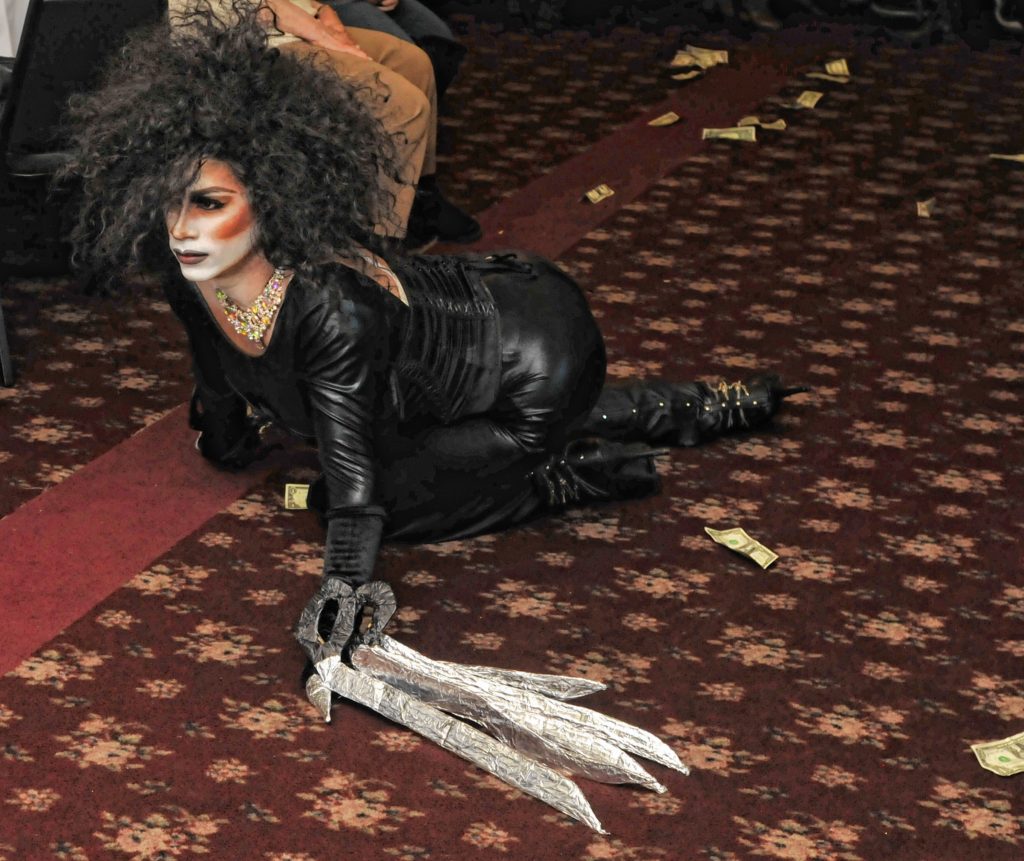 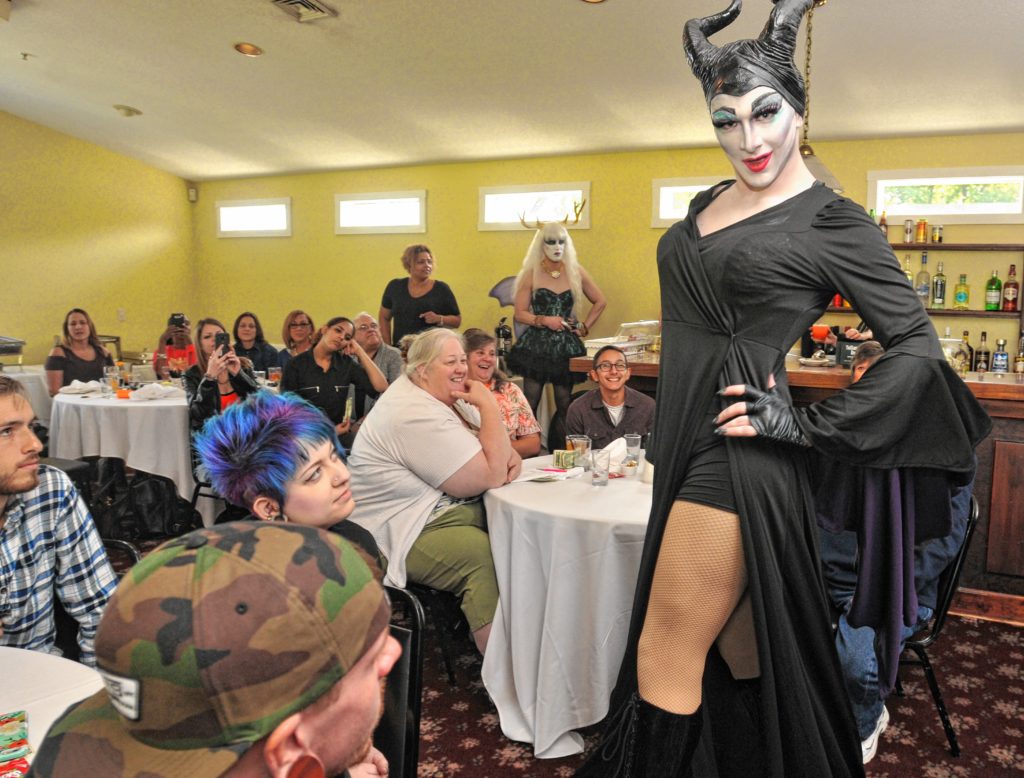 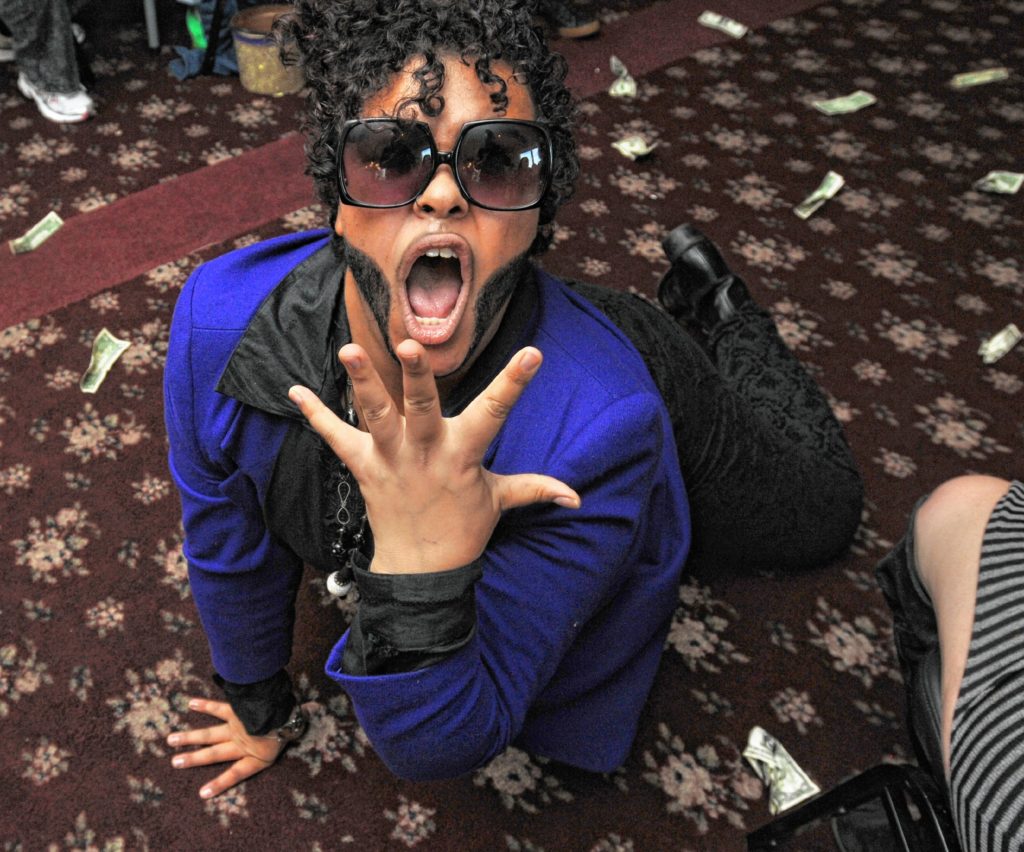 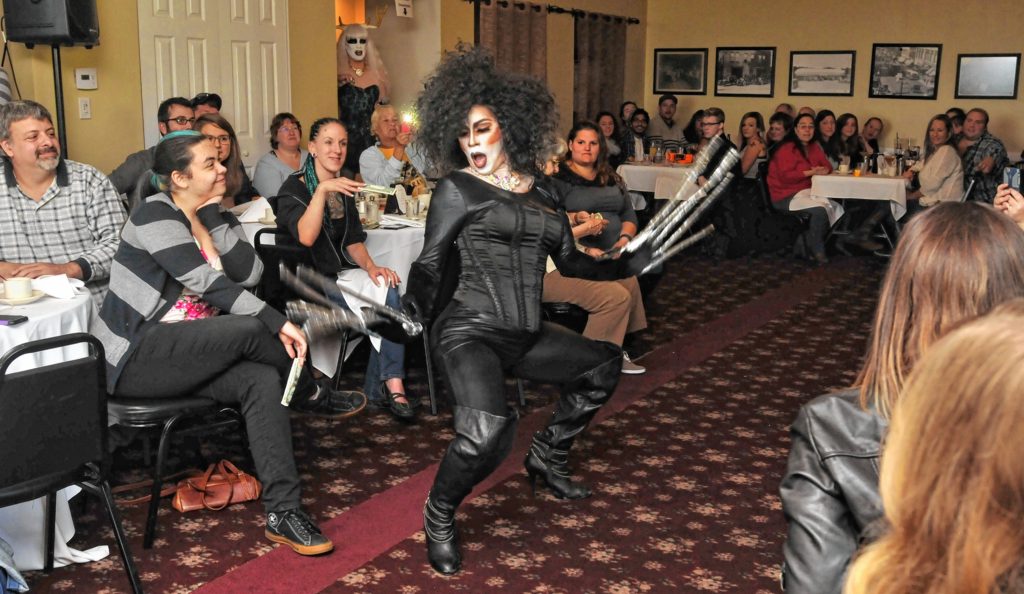 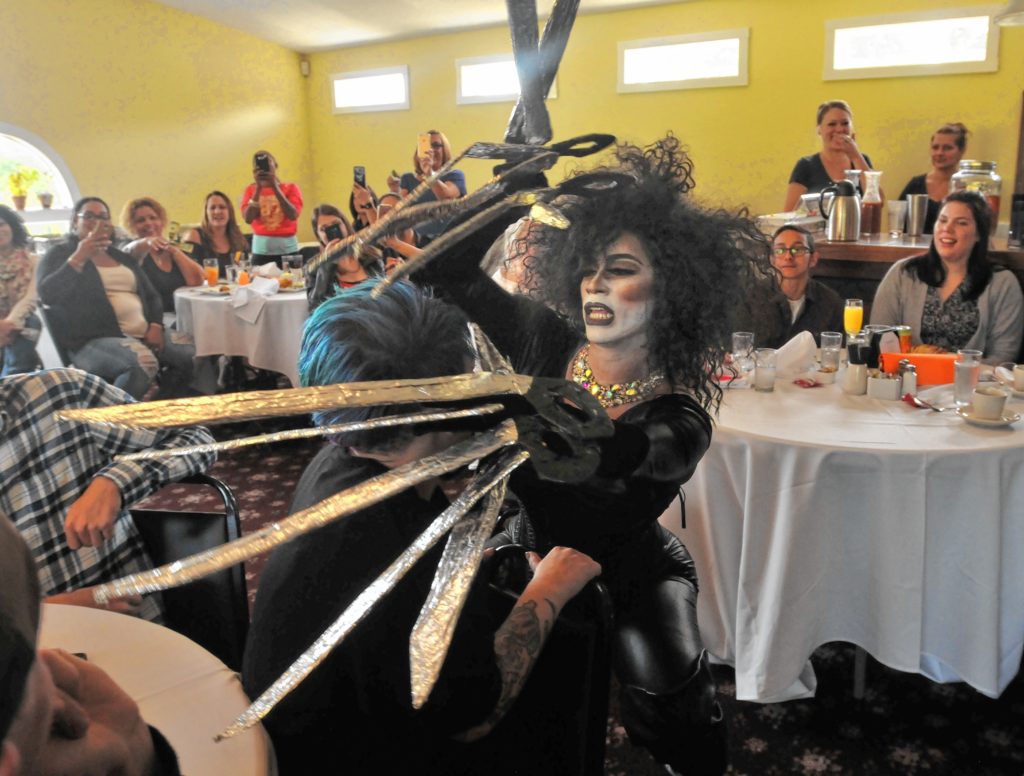 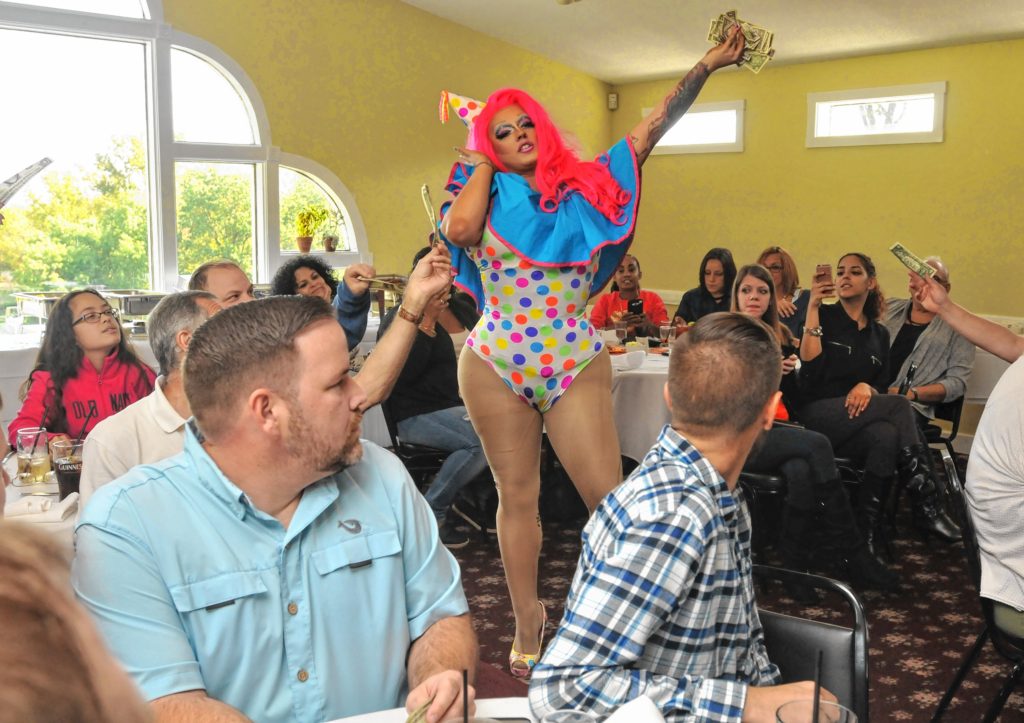 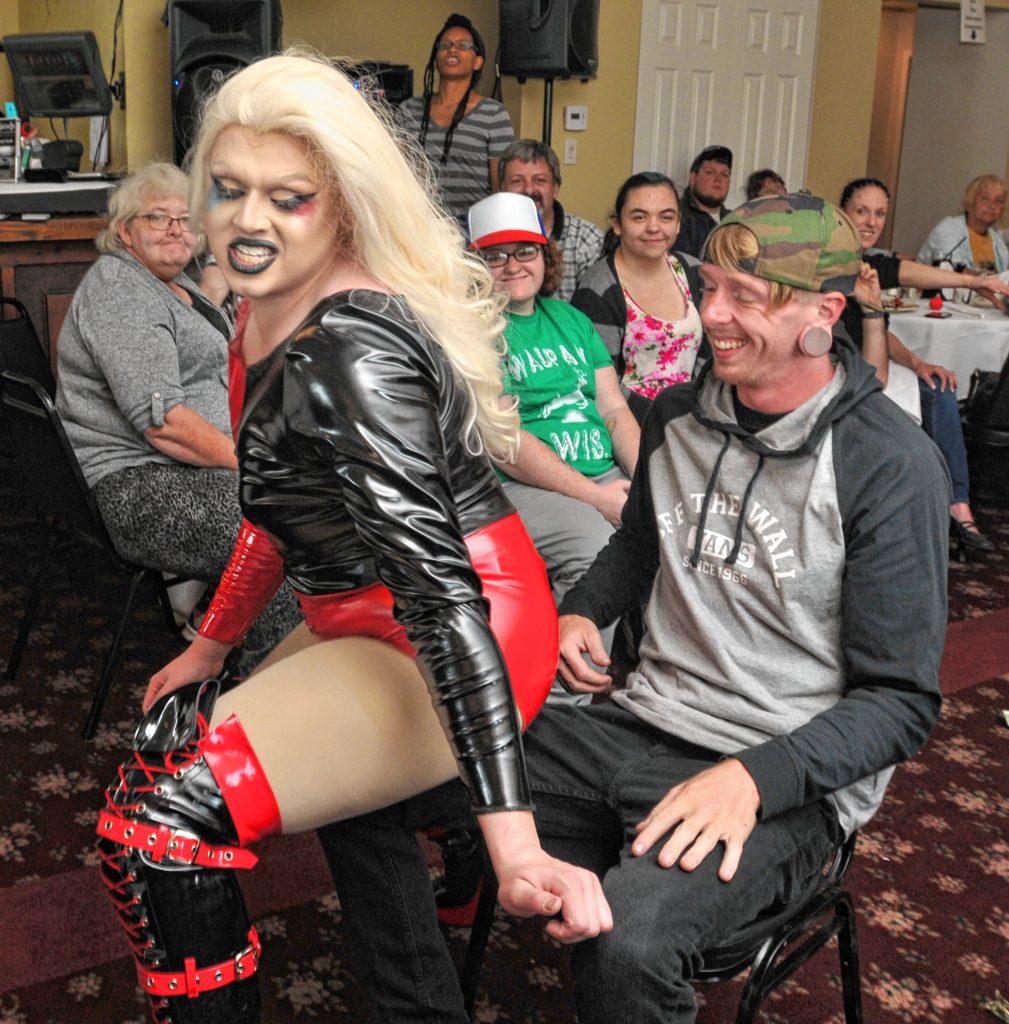 Ivanna dances all up on Jake Hathaway at Drag Brunch at Slainte in Holyoke. Carol Lollis photo. 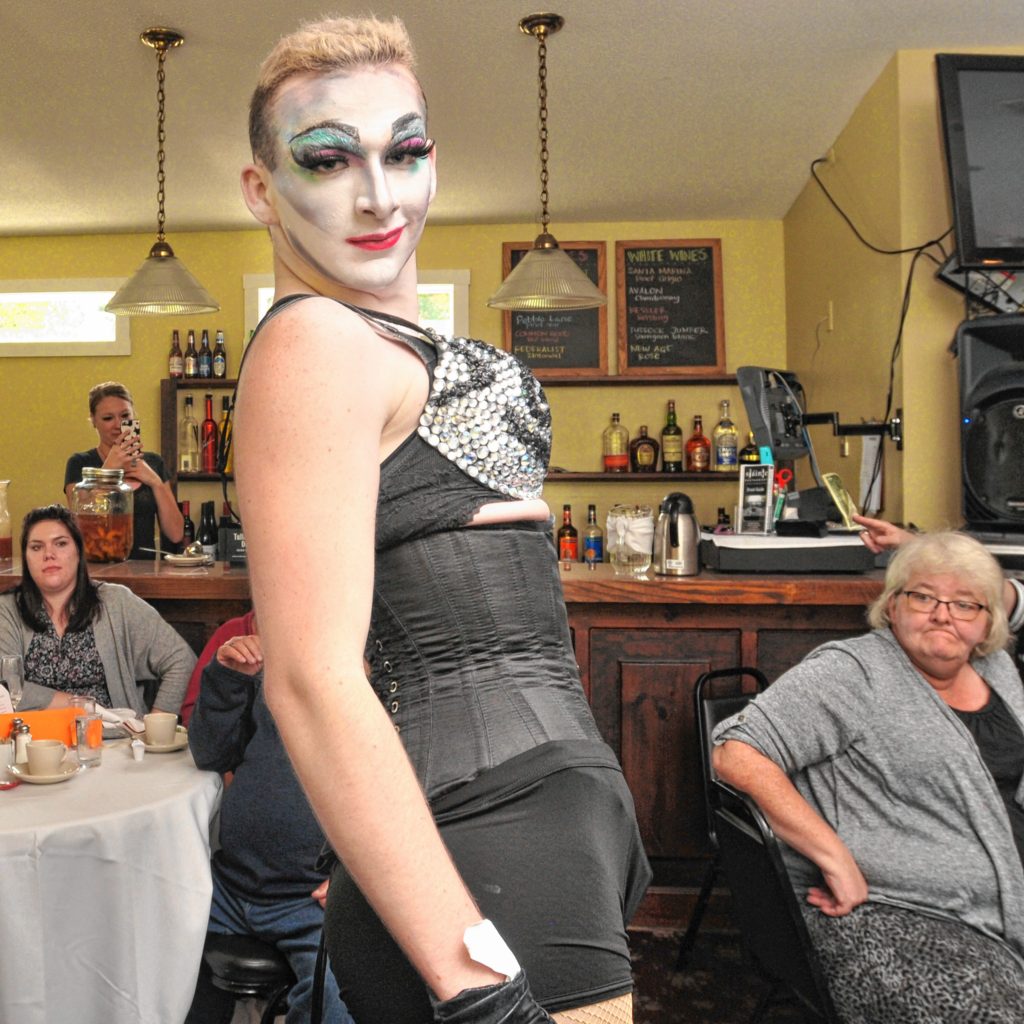 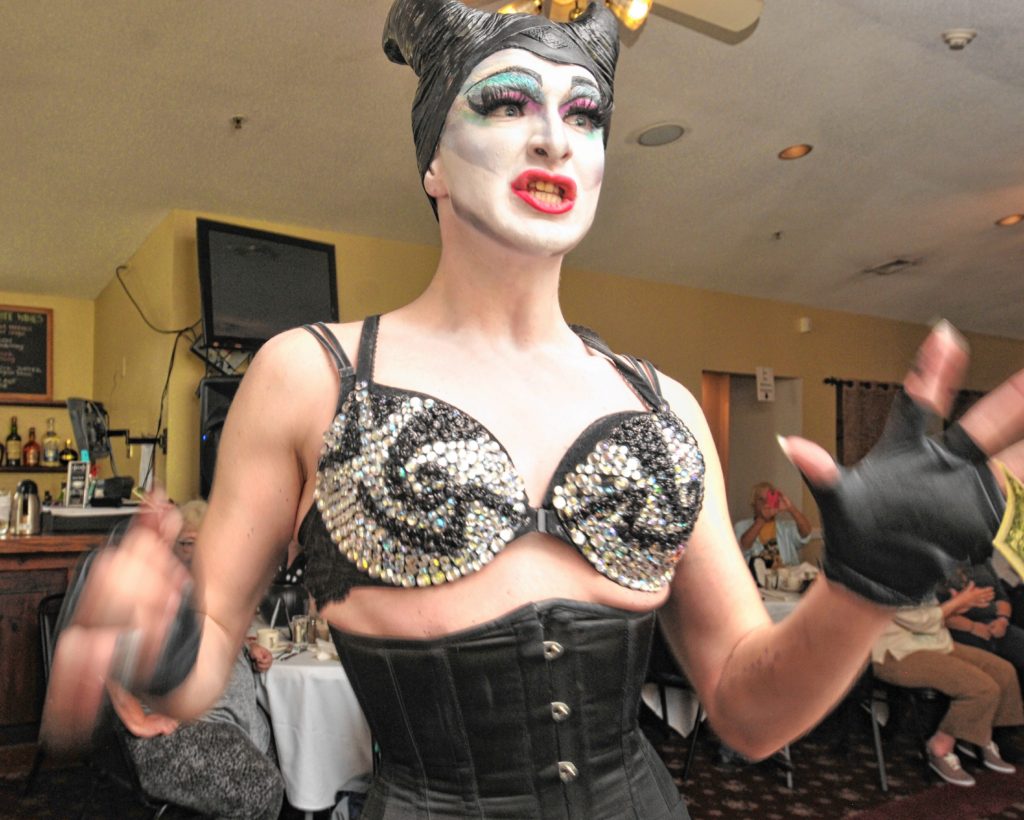 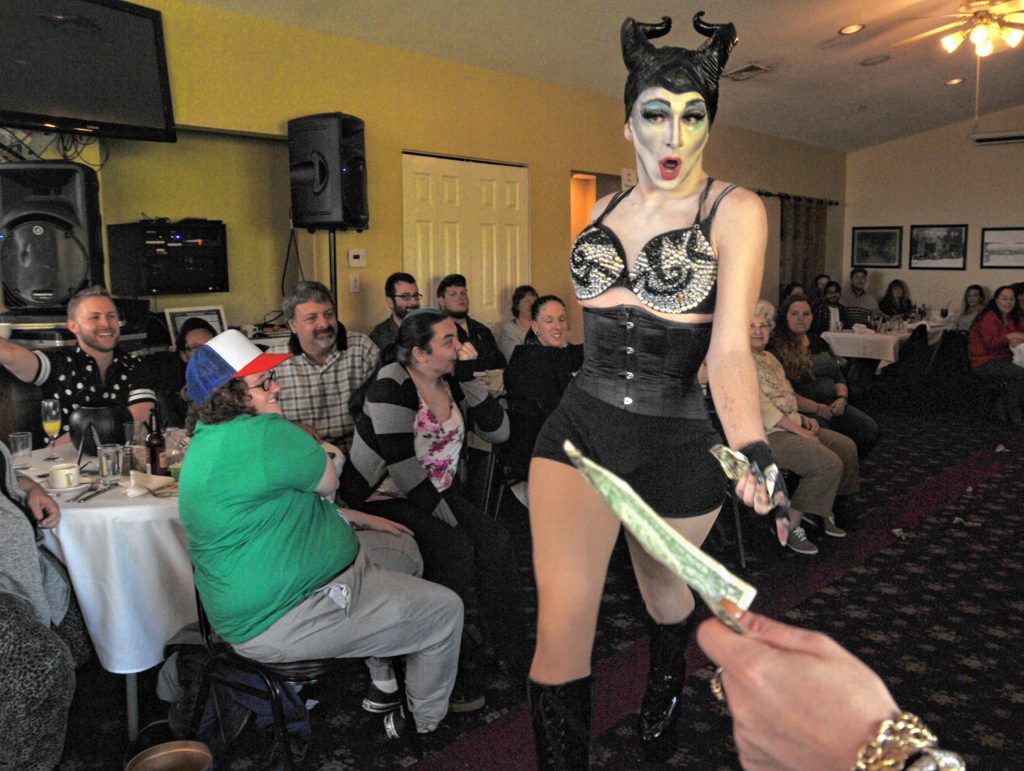 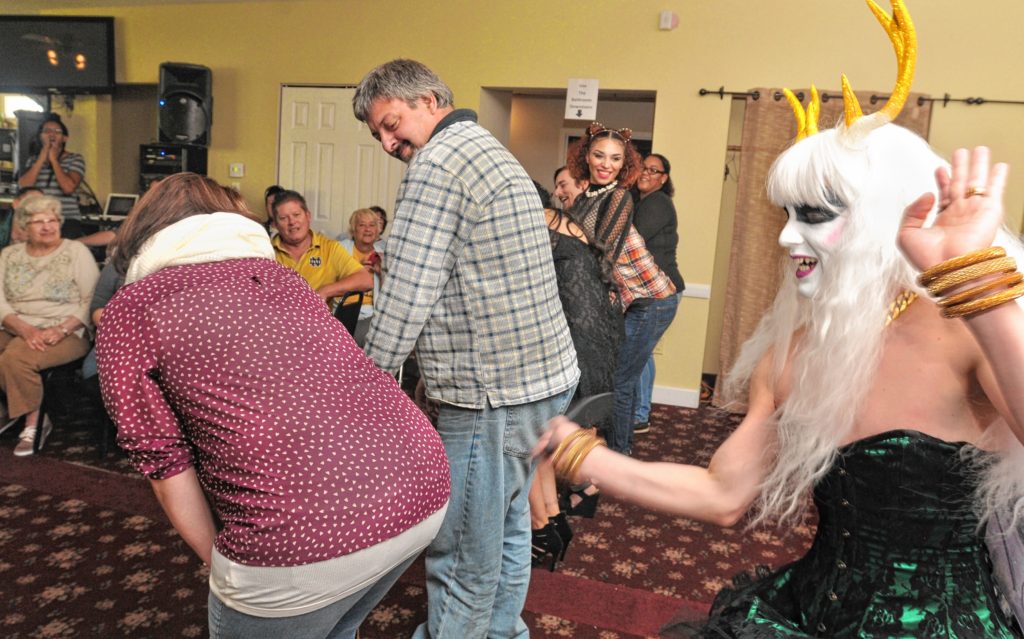 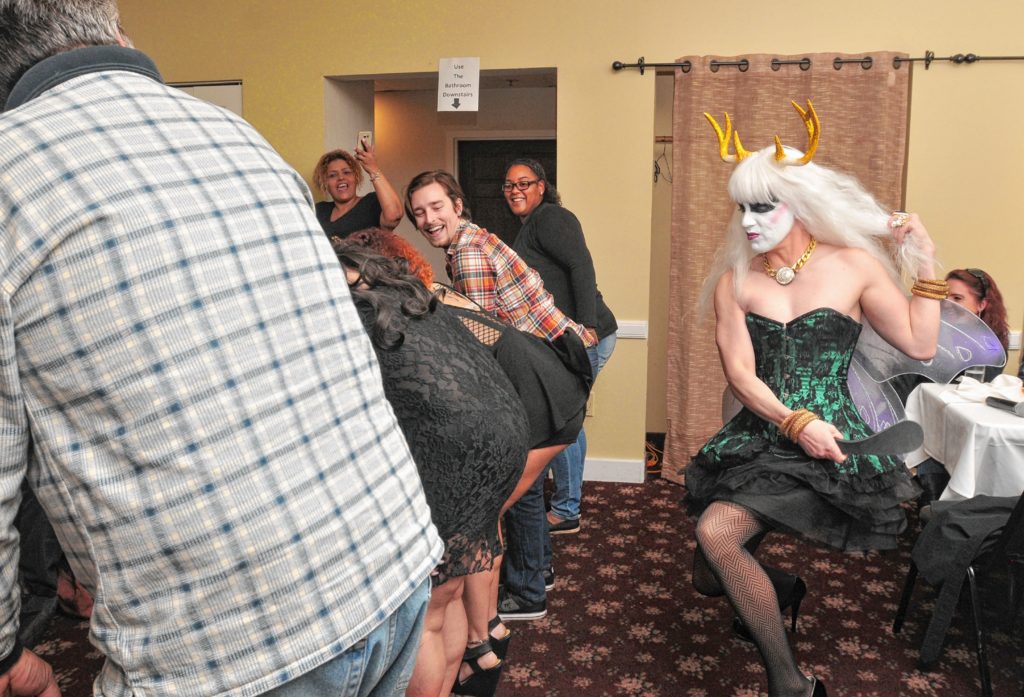 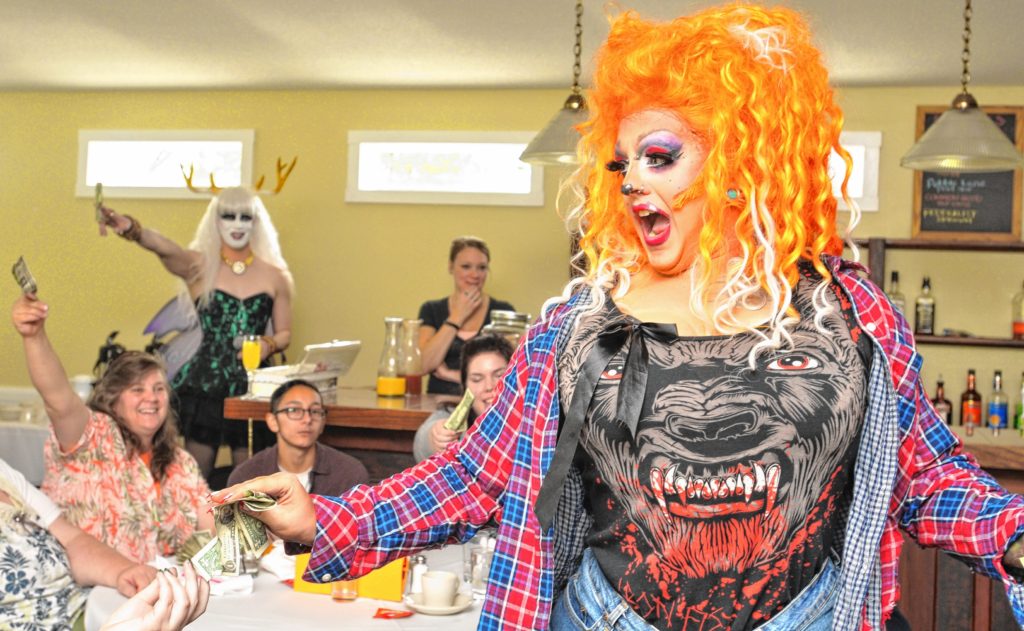 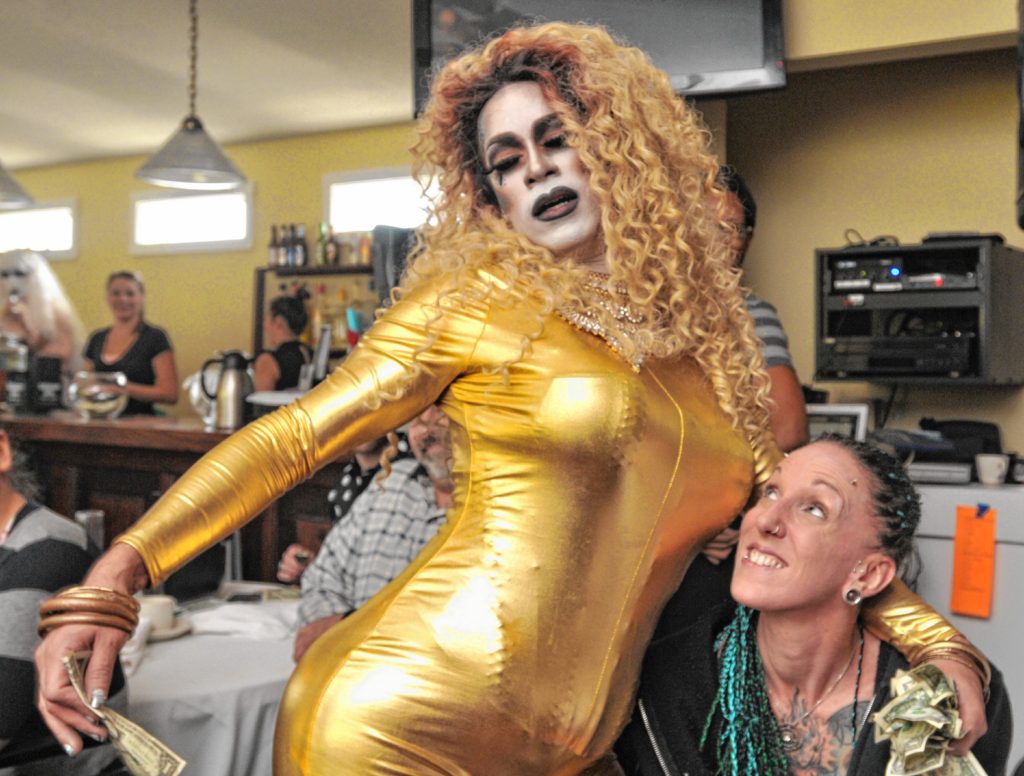 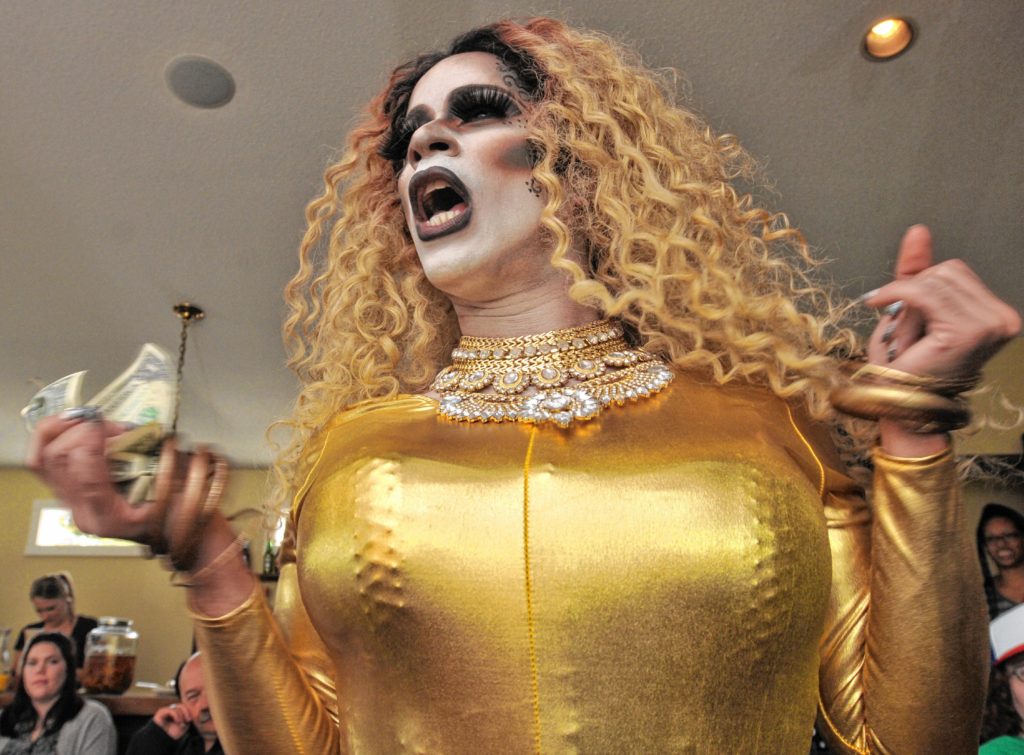 If Drag Brunch strikes your fancy, don’t think twice — get yourself to Sláinte, the hilltop restaurant in Holyoke, as soon as possible. Just don’t do what I did last Sunday.

I showed up at 12:30 p.m., after the buffet had come and gone. When I reached the upper level of the restaurant, a hundred guests turned in their seats to clock me on the stairs. Out of the sea of eyes, a vision strode toward me in fairy wings and black high heels: Hors D’oeuvres, drag emcee extraordinaire and self-titled H.B.I.C. (Head Bitch In Charge), rocking an impressive rack of antlers and twirling a wand, murmuring into a microphone.

“Hi, Hunter,” Hors cooed in a friendly baritone. “You’re so-o-o … late!” Our hostess called out for everyone to “Say hi, Hunter!” Everyone did. It wasn’t good enough for Hors, who made everyone do it again.

So, rule number one: Don’t be late, unless you’re seriously in need of attention.

Good thing Hors was so gosh darn nice about it. Drag Brunch is a body-positive, fun, queer-friendly space that empowers a roomful of strangers to open up, together, to the unexpected. And Hors D’oeuvres (pronounced ‘Hors DuVors’) works hard to make that happen. His Northampton-based entertainment company is home to Bon Appetit Burlesque, Maim That Tune Drag Show, and Drag Brunch with Hors and Friends — all of which he bills as fun and approachable for anyone and everyone (except, maybe, children not quite old enough for sarcasm, cocaine jokes, and the casual chucking of F-bombs).

Some drag queen hosts and emcees skew catty in the service of comedy. But Hors, whose “normal, everyday” name is Randy, says his drag persona is sweet, not sour.

“I think Hors is the best parts of me, exaggerated,” he told me last winter, sipping coffee out-of-costume at a Northampton cafe. “Hors hasn’t been through any crap. Hors hasn’t been discriminated against. Hors doesn’t have any sexual anxiety. Hors is just really positive, welcoming, and loving … I want my drag to feel like a big hug.”

That’s why I wasn’t embarrassed at brunch — at least until I had found a seat at one of the big round tables. There, I quickly realized my second rookie mistake: I forgot to bring cash. Tipping the performers is a must, and they work hard for it. The 10 drag acts of the day were chock full of Halloween outfits. As Edward Scissorhands, Ruby Monroe got handsy. One unsuspecting guest got a lap dance from Ivanna, dressed as the Batman villain Harley Quinn. Drag king Leo Crayz, dressed as Prince, took “When Doves Cry” to a whole new level. Cherry Poppins, as Maleficent, nearly took out a table with a twirl of her scepter. And Mia E Z’Lay, dressed as a deranged, flirty clown, made us question our phobias and fetishes within the span of four minutes.

As a theater nerd from a young age, I feel at home in off-the-wall celebrations like this, which sparkle with laughter, social bonding, and the giddy release of tension from the outside, normal world. The outfit Hors was rocking didn’t surprise me much either — I had seen him in a similarly unusual get-up at Bon Appetit Burlesque the previous week.

For that show, which Hors hosts monthly at the Florence VFW in front of a few hundred fans, he came dressed as the weird telekinetic girl from the Netflix series Stranger Things. I suspect he’ll come to the next Drag Brunch wearing a Santa Beard. I’ve even seen him as Marvin the Martian. At a certain point, looking fabulous is just a way of life.

It seems to come so naturally to him, it’s easy to miss the fact that Hors — the area’s premier “genderfuck drag queen,” almost never came to the Valley.

Hors turns 7 this month, but Randy is 34. He grew up in a military family — “I’m not really from anywhere,” he says — and landed in Texas at the end of high school. He paid his way through college by working at drag bars in San Antonio. He took bar and door shifts at the now-defunct drag club The Saint, and first got onstage during a “switch night,” when the staff rather than the queens perform. “My original name was Irene Obscene,” he says, “and I was terrible. When you’re starting out with drag, it’s just a mess of makeup and powder. I’d always loved drag, but I didn’t know who I was at that point.”

He describes the other queens at The Saint as “pageant pretty” — a far cry from the gender-demolishing make-up he now uses as Hors D’oeuvres, which has been inspired by everything from Japanese Kabuki to circus clowns to science fiction. “They were into the ideal of, like, going to the mall and being passable, as a drag queen. My drag is very the opposite of that.”

“People would call us all the time to ask, “what time does Hors DuVors come on?” he says, laughing. So when I moved, I decided I’d adopt that as my drag name.”

Randy came to the Valley in 2006 for grad school at UMass, where he completed a Masters in Sociology this year (cue the jokes about how far that degree has gotten him, and don’t worry: he cracks wise about it at least once a show). But it points to his rigorous interest in the politics of gender and performance, which infuses shows hosted by Hors with a healthy dose of feminist, body-positive, and sex-positive conversation and humor.

A few years into his time here, Randy got his drag life up and running again, and settled into the Hors persona. Ten years on, Valley life has proved good for him. “I really wanted to get to this area of the country,” he says. “Being queer in Texas, you have a tight-knit community, but everywhere else is scary. After working the clubs, we would often go to 24-hour restaurants, and people coming in would say: ‘We don’t want to sit next to these faggots — move us to another table.’ It was just a nightmare. I had to get somewhere where it was okay to be me.”

And now? He’s a business, man.

“When we met eight years ago, I was performing a lot, but he wasn’t,” his fiance Chris Oakley told me at Brunch. Oakley, 31, runs SHOW Circus Studio in Easthampton, performs occasionally at Bon Appetit Burlesque, and says he comes to nearly every Drag Brunch. “He really missed this. It means a lot to see him come out of his shell and become his performer self.”

Brunch attendees left laughing and smiling. “I just knew it was going to be a really fun environment,” said David Lambert, of Whately. “I absolutely loved it.”

“The energy level is so high,” said Alex Sokolowski, of Palmer. “Especially all the interaction with the audience.”

“I didn’t have any idea what to expect,” said Amanda Hill, of West Springfield, who was encouraged to come by a friend. “We couldn’t stop laughing.”

That’s the point, of course, as Randy told me later. “I try to be a community builder. I like that people can meet each other at the show and be exposed to new circles and performance styles.”

As Hors, he is hilariously deadpan. Out of drag, that dry sincerity can seem a bit grave at moments. But then Randy smiles, eyes twinkling, and Hors peeks out for one quick magical moment. “I like to think of myself as Northampton’s best-kept secret.”

It’s a high-heeled, bighearted secret. Now all he needs is that Santa beard.