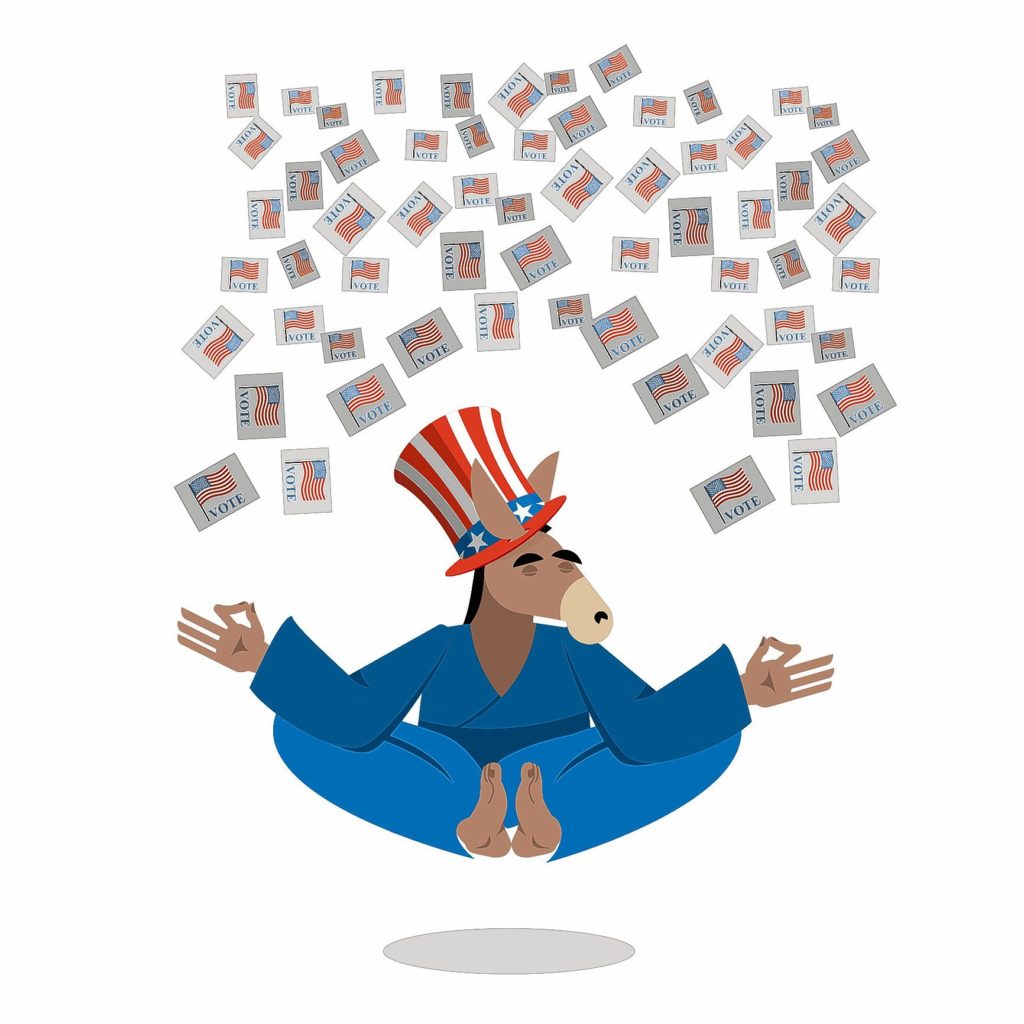 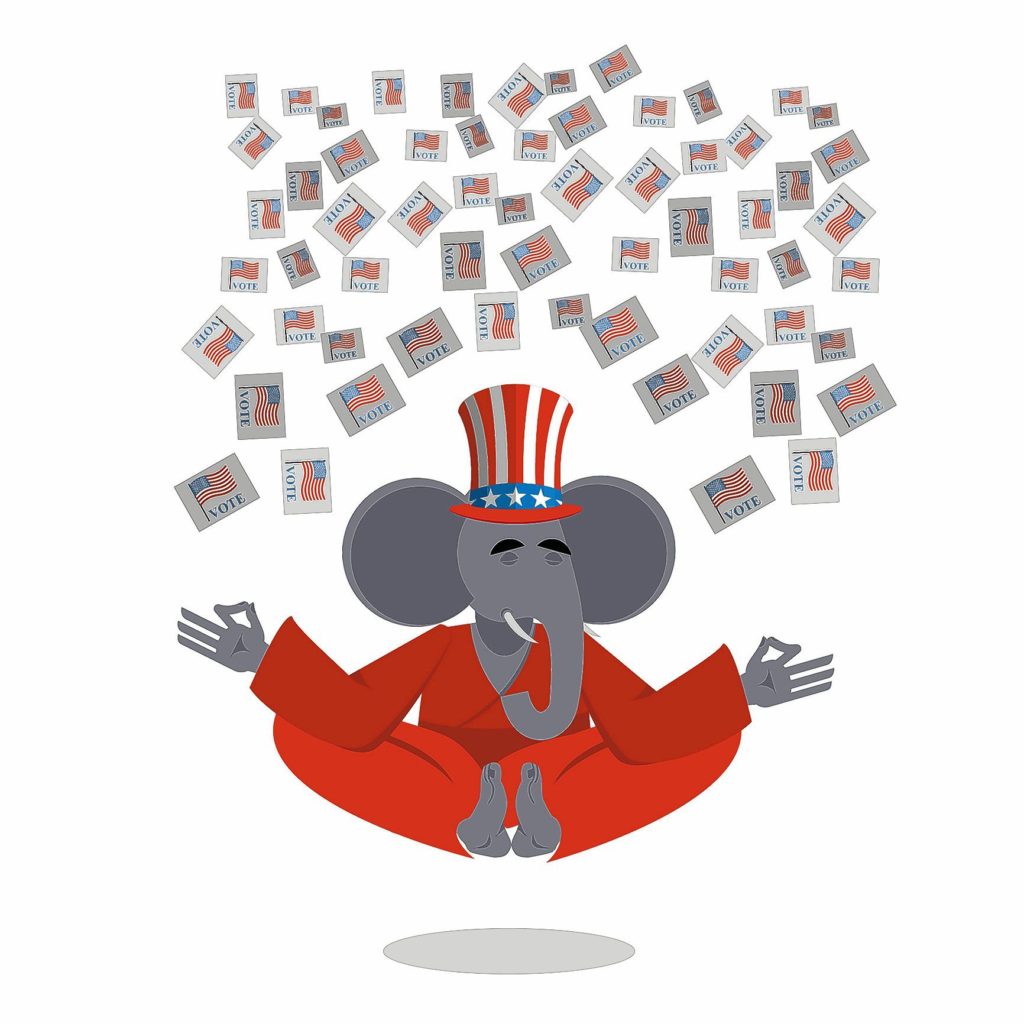 Turn off the news. Put away your phone and shut the newspaper. That heart rate spike that came with the latest election-related news — while appropriate — is not healthy.

It’s important to stay informed, especially as America stands at the precipice of an unprecedented election, but it’s also important to know your limits.

The election-related anxiety is palpable, so much so that psychologists and therapists are concerned about the election’s impact on our mental health, as evidenced by the 3,000-plus who recently signed a manifesto against what they refer to as “Trumpism.”

As Election Day approaches, the weight of our democracy hangs heavy on our shoulders. Literally. Every headline brings my shoulders closer to my ears, as if they’re trying to make like a turtle, swallow my head and cradle it there until this whole nightmare is over. It’s nice in theory, but it doesn’t help. Yoga, however, can.

Between the insistent news coverage, the maddening conversations on social media and the crippling fear of the presidency to come, the constant barrage is enough to build blood pressure and tie the body up in toxin-fueled knots. Both cloud the mind and make rational decisions harder. And considering America is poised to choose between two of the most unpopular presidential candidates in history, we need all of the collective reasoning we can muster.

Breathe. Ahh, that feels better. Inhale deeply through the nose until you feel pockets in your belly and lower back expanding. Exhale slowly through the nose. Repeat ten times before responding to any election-related comments on social media. I’m not suggesting complacency, here. Whether we’re facing a Trump presidency or a Clinton presidency, the promise of future battles lingers overhead. Warriors, especially, should make clear-headed decisions.

Take yoga breaks. In times like these, yoga is as much a civic duty as casting a ballot. America needs you at your best.

Go to hot yoga. For those days when Donald Trump’s genital-grabbing baby hands and Hillary Clinton’s Wall Street-loving goo-goo eyes won’t stop swirling around in your head, hot yoga can provide a much-needed purge. Sweat out the nasty all over the mat, replenish with plenty of fresh water and you’ll feel like a whole new person.

Make a yoga corner. If you can’t make it to class, make it happen at home. Close off a room, turn up the heat a little and get your humidifier going with some lavender essential oil. If you don’t have a humidifier, boil a pot of water, put in several drops of lavender and carefully place atop your radiator or near a heat source. Turn down the lights, put on some relaxing music and zen out.

Get warm with some sun salutes. Raise your arms to the sky as you inhale, band at the waist as you exhale. Extend your upper body forward as you inhale. Exhale into low plank. Inhale to cobra, and push back as you exhale into downward dog. Inhale to bring your right foot forward into a lunge and exhale your arms into warrior pose, with your right arm facing forward and your left arm facing backward. Inhale, focusing on a spot on the wall ahead. Exhale back into low plank, inhale into cobra and push back into downward dog. Now bring the left foot forward for warrior pose, left side. Repeat as you’re able.

Throw in a turtle pose. This move is all about withdrawal of the senses, which is great when election 2016 is hurling its worst. Sit down and splay your knees open, letting your heels touch in front of you. Tuck your hands up under your legs and grab hold of your inner feet. Exhale as you extend your forehead toward your feet.

Work the abs and surrounding muscle groups. A recent study shows a connection between a strong core and enhanced stress response.

Hang upside-down. Stay in downward dog for a while, or if you know how do a headstand or shoulderstand. Inversions improve circulation, reduce stress and are generally good for the nervous system.

Whatever it is that keeps you sane, do it. In the madness of this election season it’s easy to slip into unhealthy rhythms, but it’s crucial — to your health and that of our democracy — that you set aside at least a modicum of time for self-care. Take 40 minutes a day, even if it’s just a brisk walk outside followed by a steamy shower. You’ll be better for it.