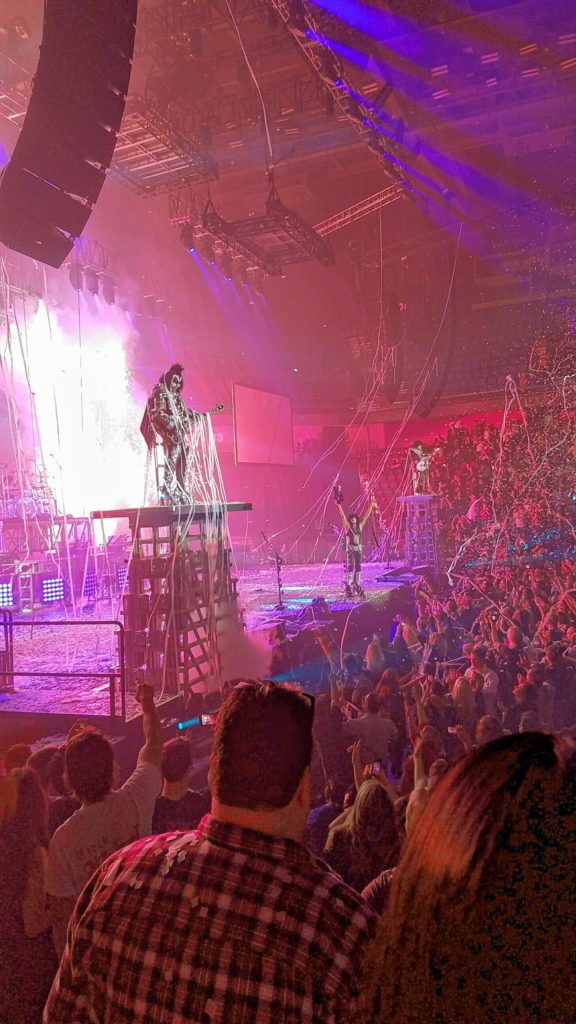 Can you rock and roll all night and still be home for the 11 o’clock news? The Crawler did — just a couple of Saturdays ago at Mohegan Sun.

KISS may be known for their outlandish make-up, ghoulish antics, and fist-pumping anthems. But behind all the greasepaint, the has also managed to amass an impressive knack for tapping opening talent. In fact, many KISS opening acts over the years — which have included Bon Jovi, AC/DC, Iron Maiden, Judas Priest, Alice in Chains, and Guns N’ Roses — would easily beat the band that gave them their big shot into the fabled Hall of Fame.

All of which is a roundabout way of saying the Crawler is never late for a KISS concert. Wouldn’t want to miss the next big thing. And here they come now – boom!

I scurried to my seat and checked my Swiss Army watch. It was just after eight o’clock. Apparently, time to rock — sans opening act.

The band rattled off a 19-tune evening that satisfied the KISS Army with core staples including “Deuce,” “God Of Thunder,” assorted chestnuts like “Flaming Youth” and “Do You Love Me,” and a heaping dose of patriotism, in which a patented Paul Stanley rap on the military culminated with a full audience Pledge of Allegiance and a rock-a-fied rendition of the “Star Spangled Banner.”

As the final pieces of confetti fell and the last remnants of gunpowder wafted through the arena air, the “Kings of The Nighttime World” — as their 1976 tune goes — wrapped things up just after 10 p.m.

A couple of days later, William Brault of the Springfield-area Slipknot tribute, Slip-Not, posted the following query to his online followers:

“I have a little question for all my friends who like to go see shows, but don’t like how late we go on,” he wrote. “What if we (as in the headlining band) started to play at an earlier time? Like 7-8 p.m. and finished by 11 p.m. or midnight? Would that bring more of you out to see the shows? They do this in Boston and New York.”

Amid a sea of “interesting”s and “hell yeah”s, a couple of prominent scenesters chimed in on the subject.

“I try to start an hour earlier now and end shows around 12:30-1 a.m,” notes Maximum Capacity/Waterfront’s Donald Robert. “People like an earlier start time, but not a headliner before 9 p.m.”

“Have bands until about 12,” offered New Fallen Day’s Keith Comtois. “Then have a DJ. People will still stay and drink until close.”

What say you, party people?