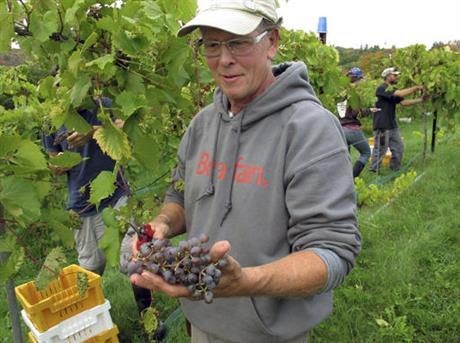 In this Monday, Oct. 3, 2016 photo, Bill Leas holds grapes harvested at Fresh Tracks Farm Vineyard & Winery in Berlin, Vt. The dry summer weather was ideal for growing grapes in some spots in the Northeast, but the drought in southern New England and parts of New York may have decreased the crop. (AP Photo/Lisa Rathke) 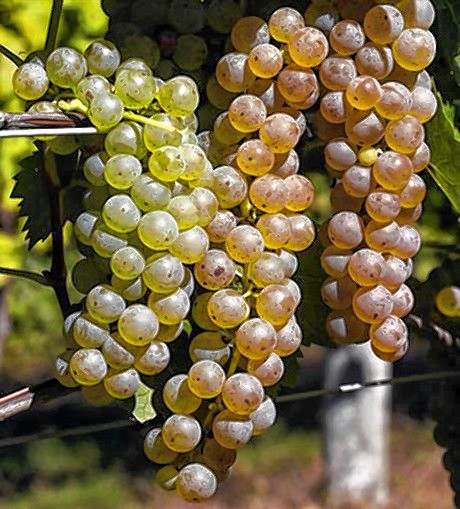 Grapes seen at the at the Jewell Towne Vineyards Tuesday Oct. 4, 2016 in South Hampton, N.H. wait to be harvested. The dry summer weather was ideal for growing grapes in some spots in the Northeast, but the drought in southern New England and parts of New York may have decreased the crop.. (AP Photo/Jim Cole) 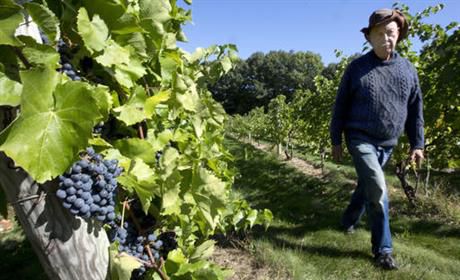 Peter Oldark walks past a row in his crop at the Jewell Towne Vineyards Tuesday Oct. 4, 2016 in North Hampton, N.H. The dry summer weather was ideal for growing grapes in some spots in the Northeast, but the drought in southern New England and parts of New York may have decreased the crop. (AP Photo/Jim Cole)

Grape harvests are underway at vineyards in the Northeast where unusually dry warm weather this summer was ideal for growing grapes.

But in parts of New York and southern New England, where drought struck, some growers are seeing decreasing yields.

Gene Pierce, owner of Glenora Wine Cellars on Seneca Lake, said his and other vineyards are seeing smaller crop yields, ranging from a 10 percent decline to as much as 30 to 40 percent.

On the other hand, dry weather can bring a more intensely flavored wine.

But it’s too early to tell how the dry weather will affect the quality of the crop, he said.

He predicted grape harvests will likely be smaller for some growers. But “What’s there is going to be really good stuff,” Martinson said.

In California, known for its wineries, grapes have adapted to cyclical drought, according to the Wine Institute in San Francisco. With last winter’s rains amid a 5-year-old drought, growers expect the 2016 crop will have normal yields, the institute says.

In New England, which contributes only a small amount to overall U.S. wine production, the dry weather was a mixed bag.

“This year’s harvest at Lincoln Peak Vineyard is great — both quantity and quality,” said Sara Granstrom of the vineyard in New Haven, Vermont, that is in the midst of a near record crop. “The 2016 growing season was dry, warm, and sunny — the perfect combination for growing grapes. But it wasn’t as dry as other areas in the Northeast, so we didn’t see any reduction in the crop from drought.”

“We had a dry summer, which for a lot of the farmers around here has not been the greatest but for grapes for us it’s actually been really great because Vermont is a pretty wet climate for grapes and these varieties they were bred to survive in a colder climate, but you know the dryer the better really for them so it’s been awesome,” said Hannah Swanson, assistant winemaker.

“But in our case at least the fruit is excellent. The dry weather meant much less fungal disease, which is sort of the bane of existence in this part or the country. Our fruit has never been as clean as it was or as high quality in my opinion. We’ll see. It’s too soon to know for sure.”