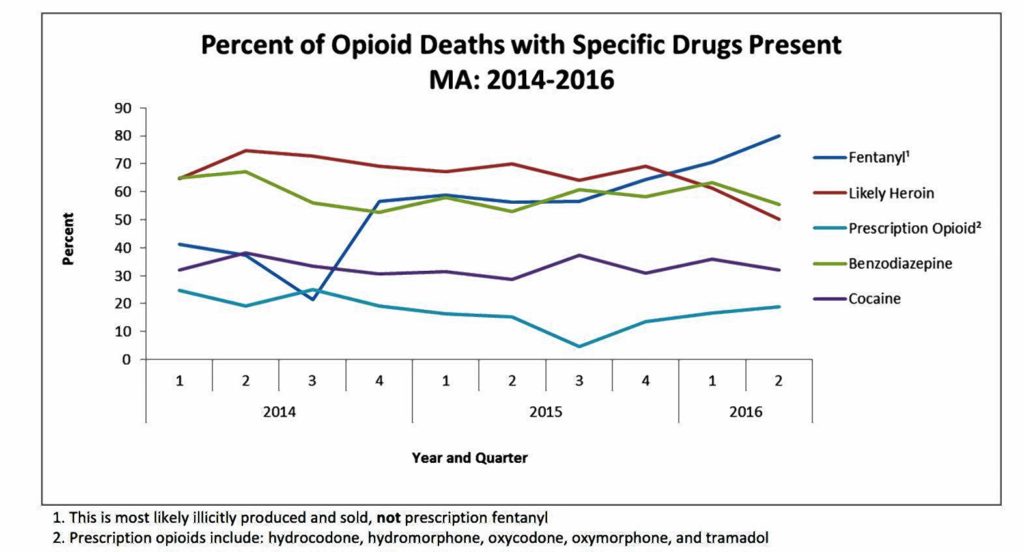 The deadly synthetic opioid fentanyl has largely outstripped heroin as the leading cause of opioid-related deaths in Massachusetts, according to state data.

Experts say the powerful drug, considered to be up to 50 times as potent as regular heroin, has been has been working its way through manufacturers in China to drug cartels in Mexico before entering U.S. drug markets.

The drug was present in 74 percent of the opioid-related overdose deaths so far in 2016, up from just 20 percent in August of 2014. Deaths in which fentanyl was a factor have increased at roughly the same rate the presence of heroin in those same deaths has decreased, the data shows.

An estimated 392 to 470 suspected opioid-related deaths could be added to that total.

Overdoses that require more than one dose of the life-saving overdose reversal drug naloxone are also up, but the number of prescriptions for and patients receiving opioid painkillers — the pills widely considered to have sparked the ongoing epidemic — have dropped over last year.

Governor Charlie Baker, in a press release, said releasing periodic data on the opioid epidemic’s toll allows public health leaders to see trends and better address the situation. Data was slow to come when the crisis started, but has been released quarterly since then.

“In our commitment to combat the opioid epidemic, we believe the constant release of data is a powerful tool to help us better understand the trends of this public health crisis,” said Baker. “We will continue to utilize every tool available from prevention to treatment to break the cycle of addiction to support healthy families and communities across the Commonwealth.”

The Baker administration has also implemented a series of new initiatives and programs aimed at controlling the crisis, including expanding safe prescribing practices, adding 75 new treatment beds between Taunton and western Massachusetts and studying the epidemic’s underlying causes, the release read.

Earlier this year, the state Legislature passed a landmark bill aimed at stemming overprescription and diversion of opioids and preventing addiction from setting in.

“In the midst of another report showing the toll that opioids are taking, it’s understandable to ask: where are we on the road to a solution?” said DPH commissioner Dr. Monica Bharel in a statement. “That is not an easy question to answer in any epidemic, but I find hope in the work of communities across the state to bend the curve of these trends and bring us closer to a solution. We must continue those efforts — no matter how long it takes.”