O, Cannabis!: Getting the Best Deal on Medical Marijuana 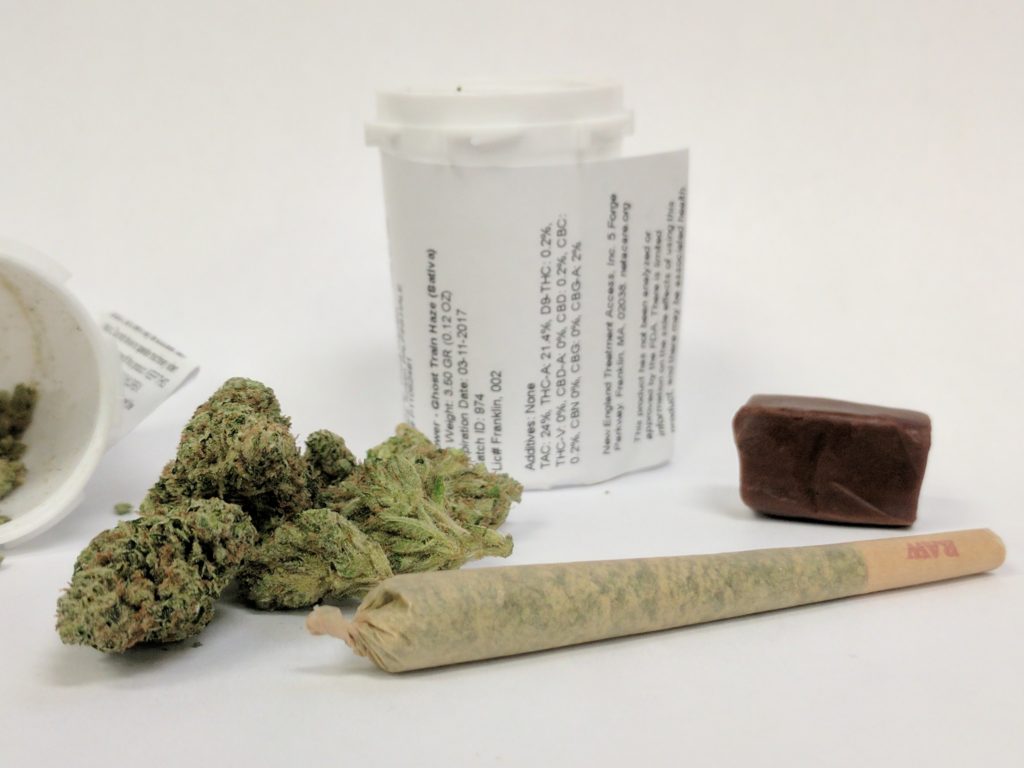 If you get up real close to the New England Treatment Access medical marijuana dispensary in Northampton, you can smell the earthy aroma of cannabis through the brick walls.

Established in 2015, NETA’s Conz Street dispensary is, so far, the only medical Mary Jane shop west of Worcester. In August, I obtained my Massachusetts medical marijuana card — and I used it this past week.

The dispensary is a weed oasis behind a fortified gate. The entrance way is locked. You have to buzz the administrator and show your patient card to a camera before you can get in. After you get past the first door, you enter a small room with a person behind a glass window who will check your card and state ID before letting you enter the store. And once you do that …

Does anyone else remember that moment in Half Baked when Dave Chappelle and his stoner buddies broke into the medical marijuana dispensary and were dumbstruck by the vastness of so much weed?

At NETA, you’re greeted with a menu listing prices — and sales — for the daily selection available: buds, edibles, tinctures, ointments, shatter, cartridges, etc., and all in a variety of strains. The menu goes on to describe the chemical analysis of each product and what the likely effect on the user will be: ” inspires feelings of creativity,” “good for muscle pain relief,” “not recommended for people who are dealing with anxiety.”

All the marijuana is kept behind the counter, and you have to show your patient card and ID again at the point of purchase.

Every day, employees say, there is a line waiting for the dispensary to open at 10 a.m. On Thursday at around 11 a.m., when I visited, it took me 30 minutes to make a purchase — and I was using “express” checkout.

When medical marijuana was approved by voters in 2008, Massachusetts gave the go-ahead for the establishment of 35 dispensaries in the state. Yet, so far, there are only eight.

One thing that could be holding back the availability of medical marijuana is the requirement that dispensaries obtain “non-opposition” letters from the communities in which they want to set up shop — and municipal officials aren’t giving these out for cheap.

Under state law, medical marijuana dispensaries must have the support of the communities in which they want to do business. To gain this support, many dispensaries in the state are providing cash perks to their hosts — some are paying more than $100,000 per year for the letters.

Karen O’Keefe, director of state policies at Marijuana Policy Project, a national pro-weed legal group, said that selling non-opposition letters to the highest bidders leads to problems. It discriminates against minority and women entrepreneurs and passes the cost of the letters onto patients who use marijuana as medicine.

“The more you make people pay for the licenses, only the wealthy are able to apply. Anyone else wouldn’t have the opportunity,” O’Keefe said.

“I find it troubling a city wants to make money from medical marijuana — they should not be doing so on the backs of the seriously ill,” she said.

But some city officials say the money will help offset some of the increase in services the dispensaries — which are all non-tax-paying nonprofits — will require.

“We’re sensitive to the potential for over-regulation, but I do not believe that that is the case here,” said Springfield City Council President Michael Fenton. Last week, the city approved a host agreement for its first dispensary.

Host agreements are “a standard practice that is being employed across the commonwealth by all cities hosting medical marijuana. And given the uncertain future of the industry, these payments will help offset increased demand for city services.”

This month, Hampden Care Facility, Inc., a Chicopee entity, came to an agreement with Springfield for a non-op letter to create a medical marijuana dispensary at 506 Cottage St. The business had been negotiating with Mayor Domenic Sarno for months — mostly over whether Hampden Care could get a 10-5 year exclusivity deal with the city. In the end, Hampden Care will get no exclusivity, but was able to get Springfield to come down on the company’s annual stipends to the city.

“It wasn’t about covering the specific costs of something,” said City Council President Michael Fenton, “it was about getting the best deal for the city.”

In the host agreement Springfield worked out with Hampden Care, in exchange for the non-op letter, the dispensary will pay $100,000 to the city’s general fund, $50,000 to the police department, and $5,000 to educational organizations. The business will also give Springfield 1.5 percent of the dispensary’s gross sales.

Fenton said Springfield modeled its host agreement on one Worcester recently brokered with Medicinal Alternatives, Inc. One of the differences, though, Fenton says, is that the Springfield deal requires Hampden Care to hire Springfield residents and at least 38 percent of hires have to be either minorities or women.

“There’s a lot of demand from developers to create these facilities,” Fenton said of medical marijuana dispensaries. “There’s a lot of communities that aren’t willing to host them. The city is like a business; where we have leverage, we will use it for the benefit of the tay-payers.”

In Northampton, NETA didn’t sign a host agreement with the city before it opened and officials didn’t hold back the non-op letter in exchange for money. But, earlier this year, Northampton Mayor David Narkewicz said he was able to negotiate an agreement between the city and NETA. The agreement provides $100,000 to the city every year as well as a percentage of the dispensary’s gross revenue, according to the city’s fiscal year 2017 annual report.

A representative from NETA was unavailable to comment on this article.

O’Keefe, of MPP, said she is not aware of other states that accept donations for non-op letters or there being other ways for municipalities to make money off the application process.

“Massachusetts just made [recreational] marijuana legal, local taxation is allowed from that or there could be revenue sharing — that could be one area of growth,” O’Keefe said. “But charging as much as you can out of a medical marijuana applicant? The applicants aren’t evaluated on who would serve the patient best, it’s who can show they can pay. It’s a disservice to sick people.”

Meanwhile, access to places like NETA remain rare for Western Mass patients. While waiting for my order, I overhear a man with long hair wearing black leather chaps say that he drove in from Framingham to pick up marijuana. The lines at the stores in the eastern part of the state are even worse, he tells a cashier who may have heard this story before — she knows him by name.