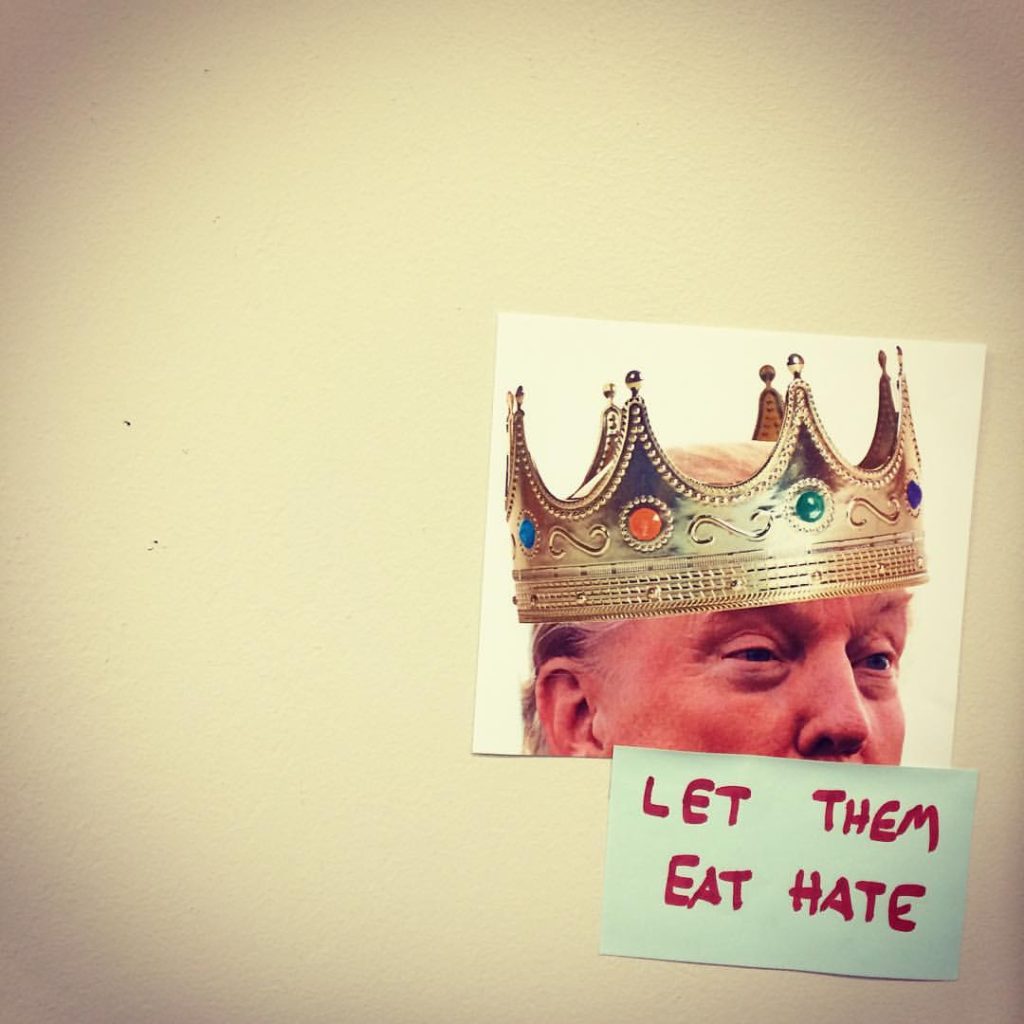 Every morning at Buckingham Palace, Queen Elizabeth II’s first order of business is to meet with her hairdresser. She drinks from bone china, eats breakfast served by footmen in tailcoats, wanders the grounds, and reads fan mail. Throughout the day, people bow. People say yes. People scurry, escort, accommodate, flatter. For dinner, the Queen eats lamb, roast beef, mutton, grouse, or salmon, with a Martini to wash it down. By 8:30 p.m. she’s tucked in, watching television. Beyond the grounds, Britain churns confusingly onward.

Man, Trump would love this.

I’m not convinced that our celebrity apprentice-elect even wants to be president. All I know is that, like all damaged demagogues, he wants to stay famous. And I’m pretty sure that giving him an actual palace, with an actual robe and scepter (and maybe a few Corgis), is the safest way to do it.

So let’s all suck it up, make our sincerest apologies to the Founding Fathers, and just coronate the poor guy. We can’t seriously expect him to have hacked his way through a tireless campaign — throttling the airwaves, printing cash every day for CNN, and running the table purely on personality — and then actually lead, can we?

When Kate McKinnon, who played Hillary Clinton on Saturday Night Live this year, spoke to those in her fake debate audience — “I get it, you hate me” — she offered them a tip: “If you never want to see my face again, elect me president, and I swear to God I will lock myself in the Oval Office and not come out for four years.”

It rang true, and we laughed. That’s why, to be honest, I’d settle for a constitutional monarchy right now (emphasis, of course, on the word ‘constitutional’).

How much easier would this scary, all-or-nothing election have seemed if we had simply split up the duties? He’s winkingly boorish; she’s boringly wonkish. He should be driving royal golf balls while she drives legislation. Let him eat cake at four in the morning, and let her eat briefings for breakfast.

Queen Elizabeth, to her credit, has long dedicated portions of her day to reading print news, studying evening reports of the day’s parliamentary proceedings, and keeping up with world affairs. Yet she is plainspoken in her desire to stay out of politics as best she can. It may be why her approval rating is at 76 percent, more than double the approval rating of Trump leading into the election.

The problem, of course, is that he’s the opposite — no info; all gusto. Shrewd as he is, he remains wildly and willfully misinformed. He doesn’t read. His attention seems to max out at 140 characters. He expels more confirmation bias than carbon dioxide. He’s as bad for us — and the environment — as an aerosol can, and even more flammable.

That’s why he should be America’s aging queen. According to a written summary by the British Monarchist Society, “Her Majesty’s actual rights as a Queen are only three: The right to be consulted by the Prime Minister, to encourage certain courses of action, [and] to warn against others.”

We can skip the Society’s further detailing of the unofficial duties, which include promoting a message of unity. Here’s one gem: “the monarchy [can] set a consistent moral standard which people can look to as a guide and example.” Yeah, no.

Let’s also remove the bits where Donald should be expected to travel abroad and liaise with other world leaders. And let’s not wait around for him to appear at any funerals, tributes, remembrances, or dedications to our armed forces and fallen soldiers (give him a break — that bone spur in his foot didn’t let him get in with the Army).

I guess he can be head of the Church, if he wants. He could appoint some archbishops. That’s probably all right.

Then once a week, on Wednesdays, Trump can have an audience with America’s prime minister, just like the Queen has with hers. What they’ll need to discuss, lord knows. But at least there will be one moral, skilled, and clear-headed politician in that room, driven to really and truly represent us.