How to talk politics with your family on Thanksgiving: an Advocate chat 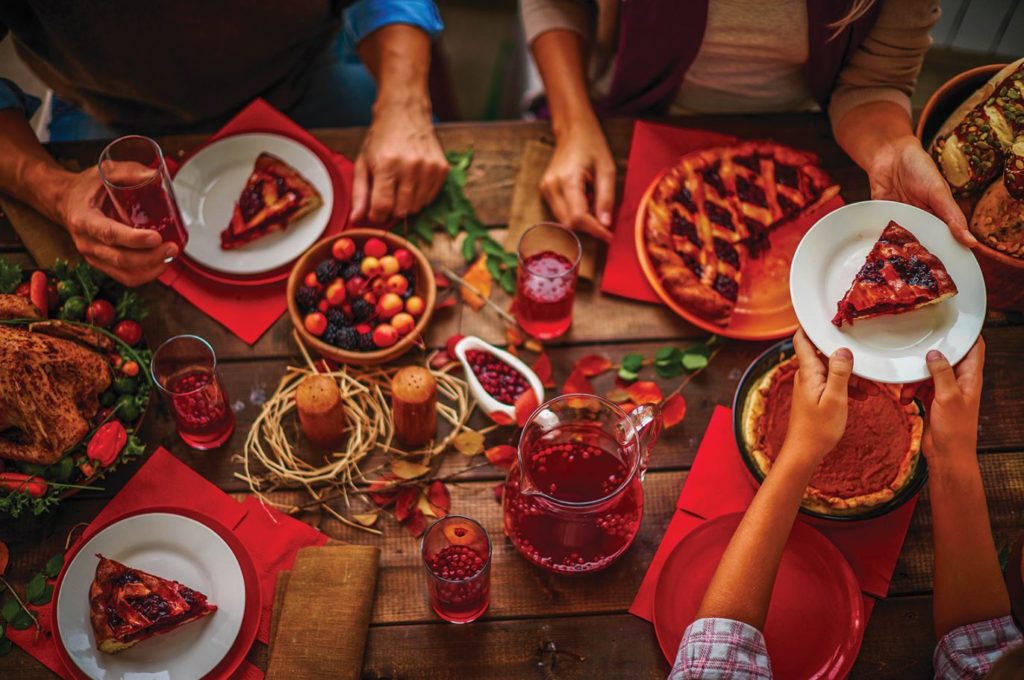 The Valley Advocate is starting up a new feature: chats! Our inaugural chat will be about mixing family and politics during Thanksgiving. If you want to hear about some of our coping strategies, read on! The conversation has been lightly edited.

kristinpalpini: What are we here for?

dave.eisen: OK, yes, just to repeat the premise from this morning: We are going to talk about coping strategies for talking politics with families during Thanksgiving

kristinpalpini: I don’t know. I think my bringing three pies will earn me some good will amongst the relatives.

petevancini: Right… this could be an extra trying Thanksgiving for me since my family has a strong tendency toward fiery outbursts and most of them are Trump supporters.
I think I’ll bite my lip as hard as I can.

kristinpalpini: Is there usually drama at the Vancini holiday table?

kristinpalpini: My holiday table is usually pretty ummmmm what’s the word for plastered and passive.

kristinpalpini: Hahahah
Yes, my holidays are very plassive.
Which surprises me because I know they’re conservative and holy hell I write for a liberal paper.

petevancini: Interesting! I guess your family contains themselves a little better than mine. haha

kristinpalpini: I’d rather we freaked out every now and then.
Back when I used to go to my aunt’s for thanksgiving there would be epic family freak outs, throwing turkey legs and everything, ah those were the days.

petevancini: Yeah, it can be cathartic I guess. We always come back together at the end, but not until after we say things we regret.
Throwing things is next level. haha

dave.eisen: I’ve definitely heard of people not wanting to go home so that they don’t have to talk about this stuff with their families this year.

petevancini: I feel like politics is always the elephant in the room. Someone will make a slight dig to test the patience of the other person until eventually it all falls apart.

kristinpalpini: I want something smart to say for when people start talking about how Hil should be in jail.

petevancini: Haha study up for thinksgiving. Get those talking points.
Yeah we should coordinate on this one Kristin.

kristinpalpini: Hmmmm … I guess asking under what charges would be a good start.

dave.eisen: Yeah, that’s a conundrum… But on the other hand, why should people be talking about Hillary at all anymore.
If people are pro-Trump because they are anti-Hillary, didn’t they already get their way?

kristinpalpini: Good point, Dave, but they will. People want to see her taken down.

petevancini: I can hear it already: “Treason!”

dave.eisen: I’m picturing someone saying that with food in their mouth.

kristinpalpini: I’d say Trump is far more treasonous … this is good we can role play dinner.

dave.eisen: In some ways, I’m genuinely curious about what individual Trump supporters hope to see from his presidency.
Many say that they are not racist and were voting for economic reasons.
Could directing the conversation there be any sanctuary?
(or maybe that’s when you get your turkey leg ready to throw)

petevancini: That’s a good idea, Dave. As long as we can keep them far away from civil rights issues, I can stomach it!

kristinpalpini: That’d be hard for me because my first question would be – how is Trump going to bring back the manufacturing jobs that he himself won’t even set up in the U.S.?

dave.eisen: Maybe a more fruitful question would be to ask what would have to happen to make them change their minds and stop supporting a Trump presidency.

kristinpalpini: Middle of america has to build its own economy or it’s just going to turn into a dust bowl, that means support for small businesses and districts zoned for their success.

dave.eisen: What about doing a reading from a “dust bowl” era book!
“I happened to bring along a copy of ‘The Grapes of Wrath'”…

kristinpalpini: Lol, what’s this in my pocket? The Grapes of Wrath?
If Trump couldn’t make people stop supporting him, i don’t think i can do it

hunterstyles: I don’t think there will be anyone sitting around our table that supports Trump.
But I do anticipate much moping and conversations that go nowhere about “I wish there was something we could do.”

dave.eisen: Yes, that is another issue! (the nowhere convos)
Is there anything positive to point to, or anything concrete to suggest about something “to do”?

hunterstyles: I feel like I want to tell people: go volunteer! hang out at churches! join marches! But I don’t know if it’ll sink in.

kristinpalpini: Support your local newspaper, ehh ehh? ehm
I’m expecting to get shit for going to the women’s march – that will be a pain.

petevancini: What will your family say about going to the women’s march?

kristinpalpini: They’ll roll their eyes and say no one will show up or care.

dave.eisen: I’m probably more in Hunter’s camp than Kristin or Pete, but in some ways I kind of wish that I could talk to a Trump supporter at the Thanksgiving table.
It would be good to hear from someone I knew well about why they supported him and if they had any positive hopes about the future.

petevancini: Want to do a Thanksgiving exchange program?

petevancini: I’ll go to your family’s house and you can go to mine?

kristinpalpini: Ya, that means you got to go to my ma’s house… hope you like the smell of old cigarettes.

petevancini: You’re right, though @dave.eisen. It’s an opportunity… if I can emotionaly distance myself.

hunterstyles: Arguing politics stresses me out. It’s exhausting, trying to disarm people of their preconceived notions while also trying to arm myself to be able to argue my points articulately at the speed of conversation.
Not my favorite thing to do.
I do suspect that the best way to open up closed-minded peoples’ minds is to get them out into the world among people they’re not familiar with or necessarily comfortable around.
Perhaps, in certain families, the family connection can actually facilitate that.
Meet me (cousin so-and-so) at this thing in Greenfield, and we’ll go for drinks after!
Thereby bringing a Trump cousin into a march or at least hanging out with people not like them.

hunterstyles: The biggest thing that stresses me out lately is the fake news problem, and social media.
We’re all victim to it.

hunterstyles: I’m at a loss for how to change that over the next 4-8-12 years.

petevancini: Yeah, the news problem is pretty alarming. Facebook says they’re in the process of trying to develop an Algorithm to filter out the fake news better.
Exactly.

hunterstyles: I guess that’s not technically too little too late if we’re thinking about 2018 and 2020

kristinpalpini: What really needs to happen is people need to learn how to distinguish fact from bullshit. School seems like a good place for this, but, uh, or not.

dave.eisen: Has anyone ever tried banning politics as a discussion topic during a meal, or during Thanksgiving?

petevancini: Every year haha. My mom makes an announcement.

kristinpalpini: We don’t usually ban the topic, but it comes up anyway.

hunterstyles: It’ll seep in no matter what.
Seriously, I feel like my mental basement is knee-deep flooded with this election, and it’ll never evaporate.

hunterstyles: It’s there underneath everything i’m taling about and thinking about.
That’s why i’m hoping Thurs isn’t depressing.

kristinpalpini: All the pie should smooth everything over.

petevancini: @dave.eisen: So it usually goes like this: My mom will announce that the discussion of politics is forbidden at the table. Then, during the rest of the meal, my dad and sister will take turns making back-handed jabs at liberal causes and trying to pick fights. It’s a tradition haha

dave.eisen: What is the best counter to a backhand?

hunterstyles: I think it’s a kick on the nuts.

dave.eisen: Actually, my mom usually changes the subject when anyone around the table gets too confrontational.
It took me years to figure out why she was bringing up these constant nonsequitors.
And I only figured out a couple years ago that it was because she didn’t want to see us arguing.

hunterstyles: Be patient. Be kind. Eat pie.
Get high!
I mean, go high!

kristinpalpini: If there’s one thing we can all agree on – it’s that Santa rules.

petevancini: Pie will bring us together.