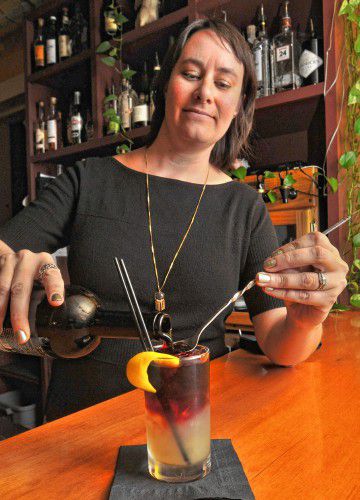 Elizabeth Martinez, who is the owner of Bistro Les Gras, pours red wine to finish a New York Sour. 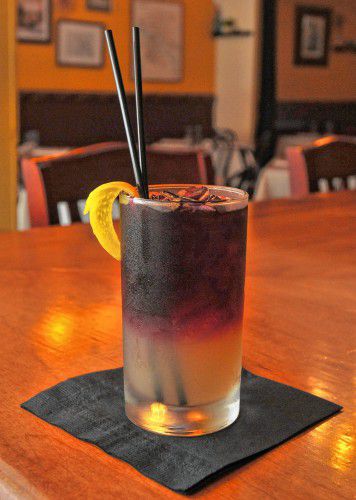 Make me something good. I used to get this request (and versions of it) often, and almost always from strangers. It was a high-turnover tourist town I worked in — most faces you’d only see for one night. But isn’t that so much of the bar experience: not knowing? The people sitting three stools down and what your second drink is going to be.

Especially now, in the world of craft drinking — i.e. consumption with interest in the flavor-making process — getting-to-know is an essential pleasure. All this to say that bargoing at its best relies on people as much as product: you use one to know the other.

OK, so what would I make? Not my own drink of choice (that would be beer, for the record), but an under-the-radar classic called a New York Sour (don’t read much into the name— its origin is full of aliases). It’s a variation of the Whiskey Sour (which is fundamentally bourbon, citrus juice, sugar) that complicates the classic sweet-savory balance with the addition of red wine. Utterly unique, and when done right, a perfect expression of the cocktail: delicious, and impossible to taste otherwise. Here’s how to do it right:

You want to use rye whiskey, which has more bite from its grain mash makeup than corn-heavy bourbon counterparts. There is more precision to a rye, more dryness, that better complements the qualities of the wine float (but not yet!).

Sour mix should not come in neon powder form, and yet it does. Stay away. Use fresh lemon, lime and superfine sugar or sugar syrup. Shake all these ingredients with ice, with decent aggression. Why? Historically, sours are made with a raw egg white, which adds froth and richness … but that also makes it heavier, adds another dimension, and this drink doesn’t need it. A simple, 10-to-15-second shake can kick up a fair froth. Strain, of course, over fresh ice.

And now the wine: a full-bodied red is what you want.

Those sort of jam notes in a Malbec or Shiraz bring a fruitiness out of the rye, while tannins mellow the bright acidity of the lemon and lime. Oh, and use the back of a spoon to disperse your pour, because this wine is going to float.

What you end up with is a drink that looks like autumn and tastes like the best each of summer, winter, spring — punchy, comforting, fresh. There’s a reason I still call it my go-to: this one never gets sent back.

Alicia Fuhrman is a writer and bartender, born on the West Coast and raised on the East, living and working in Northampton, for now.

Editor’s Note: If you’re here looking for the Pour Man, Warren Johnston will be back on Jan. 5, 2017.

How to make a  New York Sour

• Add all ingredients EXCEPT the wine; shake with ice. Strain over fresh ice. Top with wine.
• Alternatively, simply head over to Bistro Les Gras at 25 West St. in Northampton, where smart bartenders are curating an enviable cocktail program, and can make about as perfect one of these as you can find.