Basemental: Don’t Give Me That Corporate Ambition 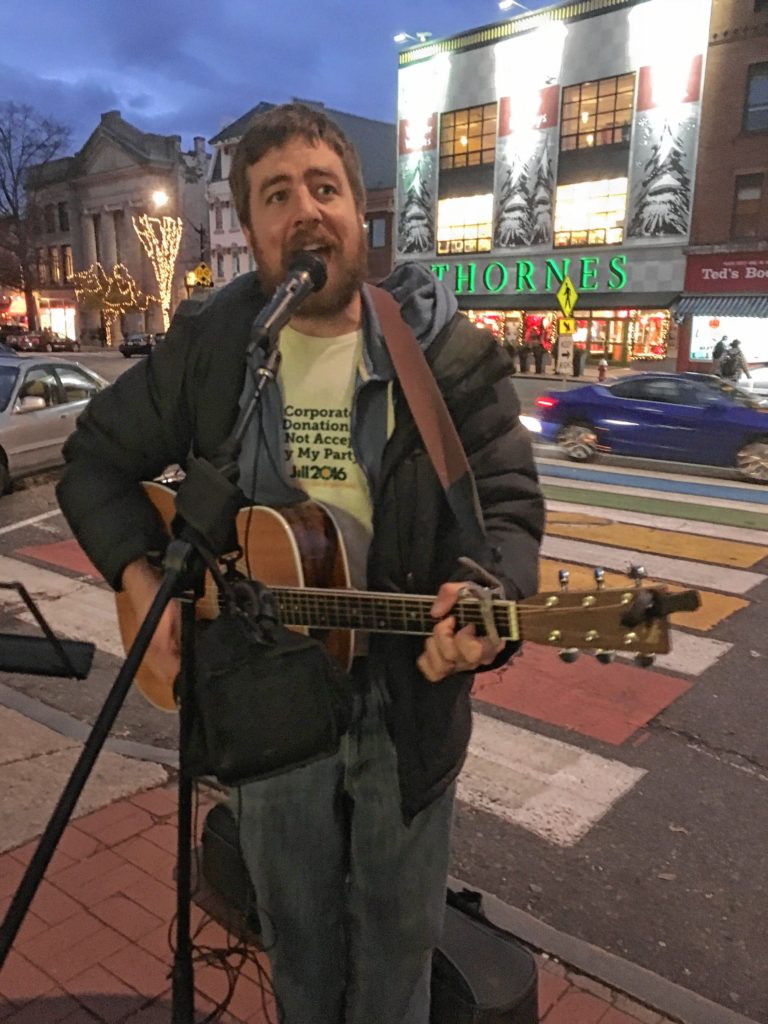 Ben Grosscup, of Greenfield, plays outside the TD Bank in Greenfield. Will Meyer photo.

On Thursday, Dec. 1, I stood outside the TD Bank in downtown Northampton with about 30 other people to stand with the Sioux Nation and indigenous-led water protectors — not only to stop the pipeline, but to asphyxiate its funding. Local organizers answered an ask from Indigenous organizers at Standing Rock to make these goals a reality.

Sound carried across Main Street as our group chanted on one side of the street, and a delegation of other loud mouths and sign wavers convened across it in front of the Bank of America ATM kiosks. In call-and-response fashion, all of the peacefully assembled shouted: “From Standing Rock to Palestine, occupation is a crime,” battling with traffic and the white noise to be heard downtown.

I guess I was busy yelling (or chatting), but all a sudden, a scruffy and stoic bearded white guy wearing floppy sneakers, blue jeans, a Jill Stein T-shirt, and a puffy winter coat started setting up a microphone stand and fiddling with a micro PA system. Ben Grosscup from Greenfield took out his guitar and started singing a song he helped write. Sung to the tune of “Old Time Religion,” “Don’t Give Me That Corporate Ambition” is a rallying cry against the Dakota Access Pipeline with lines like: “TD is a financer of rising seas and cancer/ We’re demanding that you answer for these catastrophes.” Or: “Why should we go quiet as your cops create a riot/ What you’re selling; we don’t buy it. Water should be clean and free.”

“There’s a real need, I think, to infuse social movements with poignant musical content that holds the vision and ideas of those movements,” Grosscup told me. Since 2013, he has served as director of The People’s Music Network (PMN) in Greenfield, a diverse community of singers, artists, activists, and allies. In adapting songs for contemporary movement struggles, he credits much of what he has learned to the performance experiments he’s attempted, and the critical conversations he’s sought out, within the PMN community since he joined in 2005.

“As a performing artist myself, I dedicate my work to amplifying the social movements I am part of, which means listening to what the social movement is about and figuring out who is writing stuff that speaks to what that movement is about,” he said. “How do I adapt it? How do I work with that tradition? And how do I work with the organizations that are actually putting forward an alternative to the catastrophes of global capitalism?”

After “Don’t Give Me That Corporate Ambition,” he played a rendition of “We Shall Not Be Moved,” re-written by Dave Lippman and adapted by Grosscup. There are verses about Islamophobia, hate crimes, Black Lives Matter, Palestine, refugees, and Standing Rock. His version understands the connectedness of struggles and their movements for justice. He told me that “‘We Shall Not Be Moved’ is so commonly sung at activist events that I don’t always want to hear it, but I want to take old stuff and make it new.”

Grosscup is always wrestling with what his role within movements should be. With regards to Standing Rock, he said, “I’m a white, middle-class, radical ally, not an Indigenous person who has made that choice to put my body on the line, like thousands and thousands of people are doing at Standing Rock right now.” He is keenly aware that one must be extremely careful with other people’s struggles, and must use their voice to lift up the struggles of others, rather than use it to flatten them.

Grosscup, with a big grin, was able to get everyone to sing along. We went from shouting chants to singing along and smiling.

It should go without saying, but is worth repeating, that you can’t fight hate and fear with hate and fear; but like Indigenous water protectors showed in North Dakota, you can win with prayer. Despite Sunday’s news of an easement to cancel the permit to drill under Lake Oahe, the pipeline is not cancelled, and the road to indigenous sovereignty  — with an end to fossil fuel fuckery – will be long. With song and prayer, and we allies knowing our place, we might just win for real.

PMN holds two major gatherings each year, drawing a multi-generational group of politically-inspired artists and musically-inclined activists from all over the Northeast. The Winter Gathering takes place at the Greenfield Middle School, Jan. 27-29. Info at peoplesmusic.org.