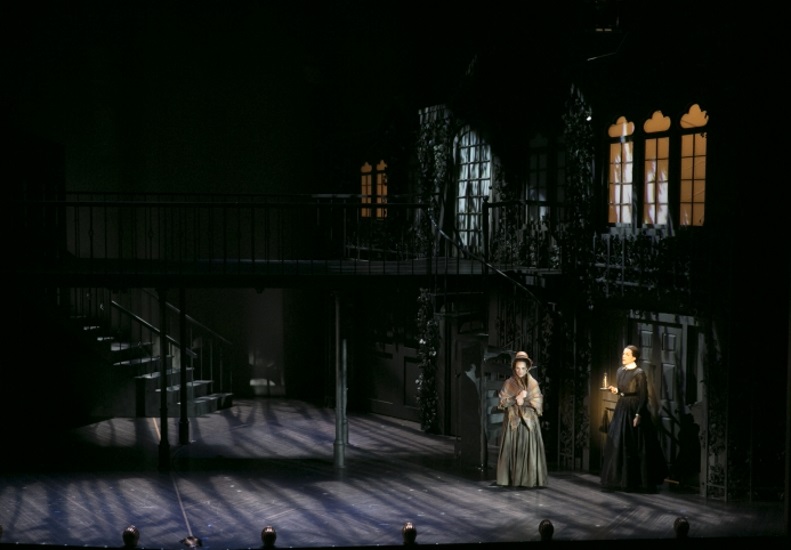 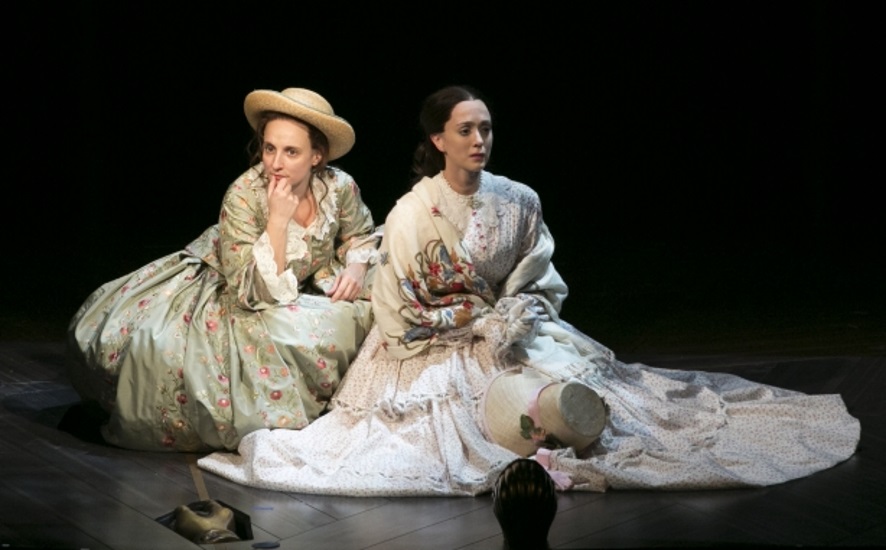 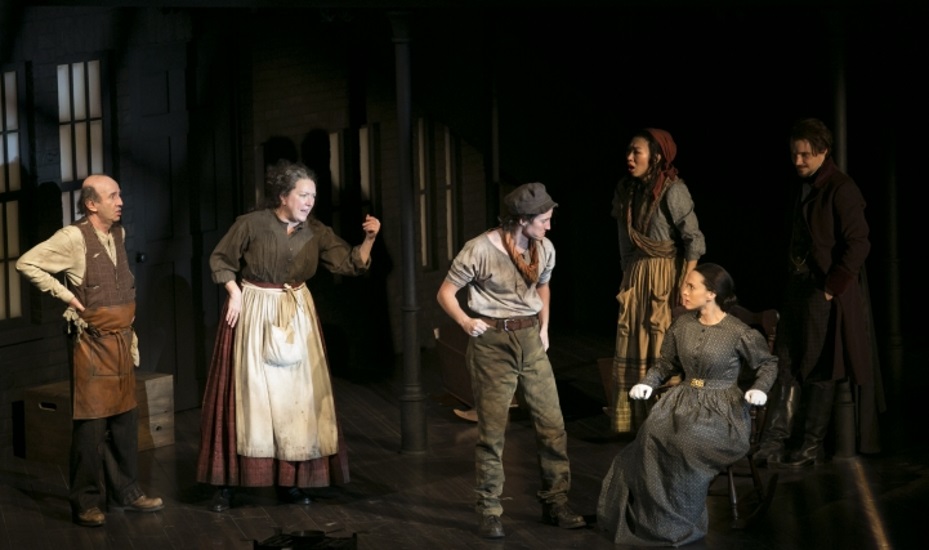 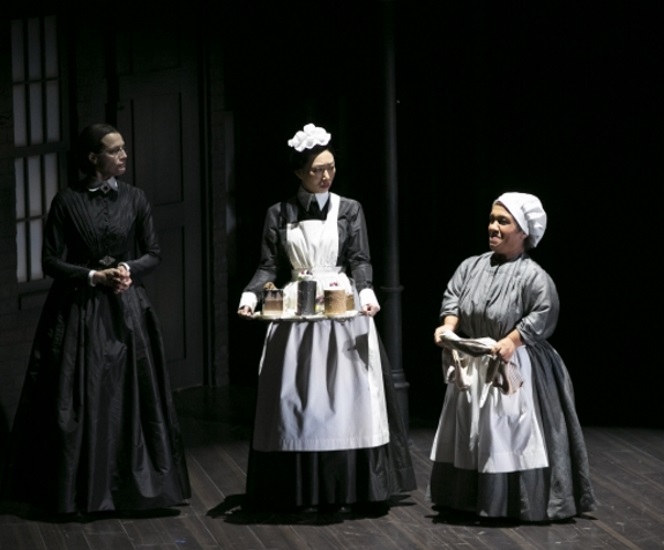 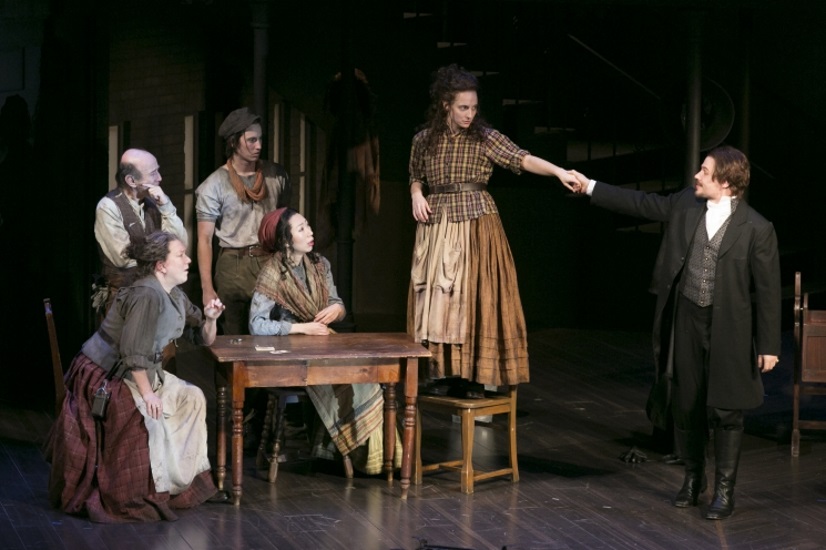 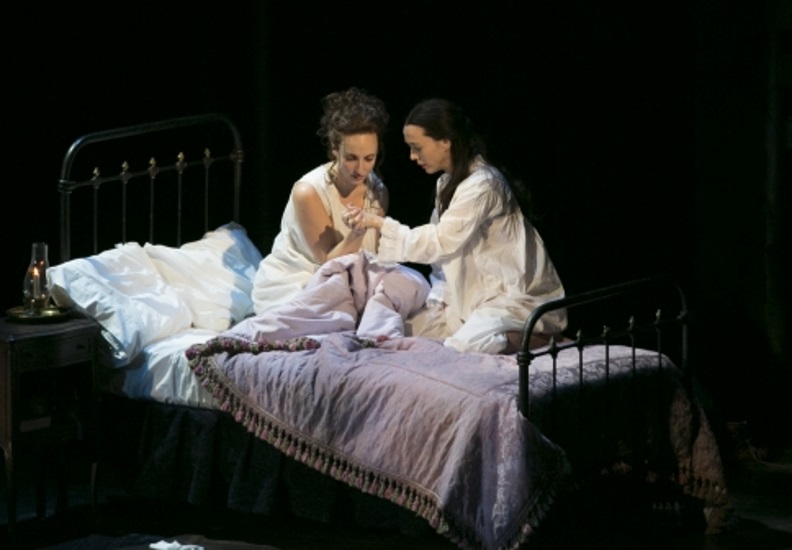 Sarah Waters’ 2002 novel Fingersmith is a gothic mystery-romance set in Victorian England. It’s a tale of devious crime, illicit love and cascading betrayals, with as many hairpin plot turns as a, well, as a Victorian novel. Alexa Junge’s stage adaptation, developed at the Oregon Shakespeare Festival and now playing at the American Repertory Theater in Cambridge through January 8th, skillfully wraps the 500-page book into two-and-a-half hours of absorbing, fast-moving (if sometimes too fast) theater. 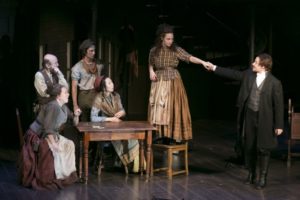 It begins in a literal den of thieves in the grimy Southwark borough of London, where a teenage orphan, Sue Trinder, has been brought up as a pickpocket, a “fingersmith” as brash and cunning as any Artful Dodger (Waters’ nods to both Dickens and the Brontës are frequent and unapologetic). The place is a clearinghouse for stolen goods and abandoned babies, supervised by wily Mr. Ibbs and brassy Mrs. Sucksby. Into this shady shop strides Richard Rivers, a gentlemanly con man, proposing a swindler’s dream scam.

In the provinces there’s an innocent 17-year-old heiress-to-be who stands to inherit her dead mother’s fortune when she’s 18, but who is kept closed in a lonely mansion by her domineering uncle. Rivers intends to insinuate himself into the household and the girl’s affections, and then elope with her, abetted by Sue, who is to present herself as a lady’s maid and later share in the spoils. Having married the naïve mark, the rogue plans to have her committed to the madhouse where her own mother died in childbirth. 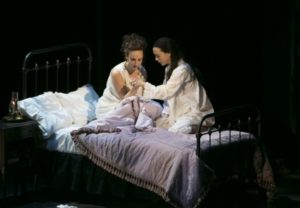 Maud Lilly, object of this heartless scheme, has been trained from girlhood by her uncle, a parched bibliophile with a peculiar specialty, to be his secretary as he compiles an encyclopedic bibliography of his private collection. In her cloistered and solitary existence, she dreams hopelessly of London, a distant mirage. She’s ripe for plucking and eagerly grasps at this chance for freedom.

Things get a little sticky, though, when Maud and Sue’s mistress/maid relationship turns to sisterly friendship and then to passion. (Most of Waters’ novels navigate the terrain of forbidden lesbian love.) Just as the scheme approaches its conclusion, the tables suddenly turn, with a sensational first-act curtain that sets the intermission audience abuzz. After which things continue to turn, and turn again, and then again, as expectations evaporate and perspectives shift.

Christopher Acebo’s unit set serves effectively as both the crooked London hideout and the shadowy country estate, with fluid scene changes assisted by a half-stage turntable and Jen Schriever’s moody lighting. Bill Rauch’s staging is equally crisp, giving the sinuous narrative, complete with flashbacks, a breathless momentum – though a bit less haste in the storytelling would have made the growing connection between Sue and Maud more credible and affecting. 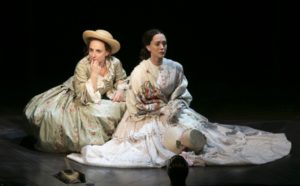 Tracee Chimo’s performance as Sue burnishes her chameleon reputation, drawing us confidently into the young woman’s underworld milieu and letting us see through her eyes the progress of the shameful intrigue she’s been recruited into. I found her far more sympathetic than Christina Bennett Lind as Maud – an imbalance that disturbs the plot’s knife-edge tension. For some reason, Lind affects a finishing-school accent, a debutante manner and a penny-dreadful delivery that contradict the character’s circumstances and ring particularly false in moments of emotion.

The playwright has added a gay identity to Rivers’ character that’s not in the book, which emphasizes that he’s interested only in Maud’s money but is signaled in Josiah Bania’s performance by fey looks and gestures that undermine the scoundrel’s rakish charm. 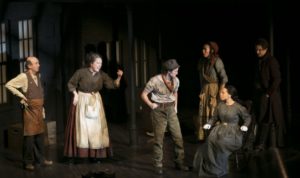 As the resourceful Mrs. Sucksby, Kristine Nielsen is as warm and hearty as T. Ryder Smith is cold and severe as Maud’s uncle.

The leads are supported by a lively ensemble of nine who take on a Dickensian multitude of subsidiary roles. They are not only versatile, but racially and physically diverse – a welcome sight which adds to the show’s frank theatricality – though less than confident in their approximations of English regional dialects.

Fingersmith is a richly told page-turner of a novel, and Junge’s edge-of-your seat adaptation faithfully translates its surprise-packed storyline and adds dashes of humor to its sinister atmosphere. If you haven’t read the book before seeing the play, you’ll be swept up in its corkscrew plot twists. If you have, you’ll enjoy watching the screw turn as the twisting threads untangle.