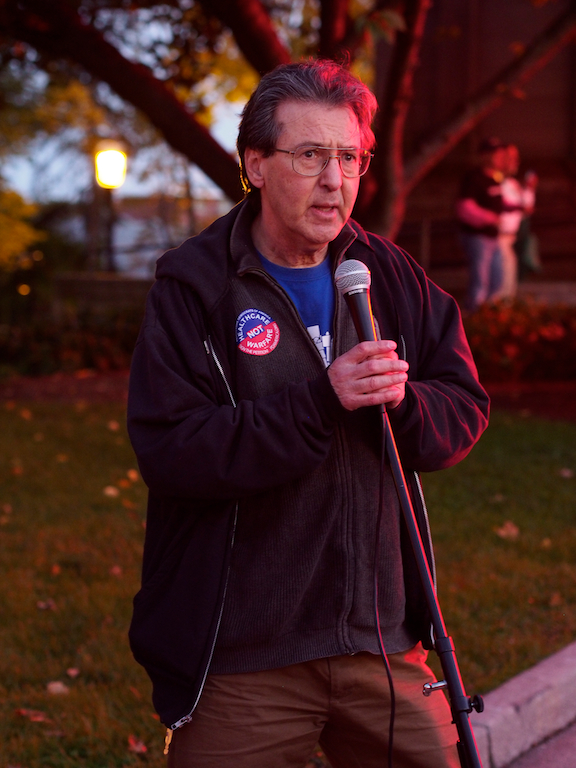 Jonathan Weissman in Oct. 2013 at an event in Northampton.

After being at the heart of the labor movement in Western Mass for over 40 years, Jon Weissman is retiring as the coordinator of Western Mass Jobs With Justice at the end of this year at age 70. Over the course of his career, Weissman served in the trenches of the labor movement as the President of the National Association of Letter Carriers, secretary/treasurer of the Pioneer Valley AFL-CIO, and was active in a number of nonprofit advocacy groups. He developed a reputation as both a staunch advocate and and a bridge-builder.

“He’s a real diplomat,” says Eric Bauer, who will become Weissman’s successor at Jobs With Justice this January. “He knows how to bring people who may have divergent views together and make sure that we’re all kind of pushing in the same direction… I don’t think a lot of these groups would have a relationship with each other if it weren’t for Jon.”

Weissman started down the path of social activism in high school, campaigning for civil rights in his native Virginia; an interest that would eventually propel him into the labor movement.

“I’ve always had kind of an opinionated approach to life and sometimes it’s an irritating opinionated approach,” Weissman says. “I just thought, as a way to live in the world, it was doing things that actually moved the ball or felt like they were real change, not just lip service.”

His real education came, he says, when he joined Students for a Democratic Society, the preeminent anti-war and social change organization of the Vietnam era. When he graduated from Amherst College, Weissman knew he wanted to continue his work within the movement by becoming a community organizer.

“If you want to be an organizer you say, well, I should just get an ordinary job, especially if I can get union protection,” Weissman says. “My father worked at the Pentagon and he always told us to fall back on these civil service tests.”

In 1970, Weissman started what would be a 32-year career as a letter carrier for the U.S. Postal Service on the day that the famous nationwide postal workers strike was initiated. A Time Magazine headline proclaimed it “the strike that stunned the country,” and while Weissman was not yet eligible for union membership at that time, it didn’t stop him from attending the meetings and getting involved.

At the time, Congress had just voted to give itself a 41 percent raise, while postal workers — many of whose wages were so low that they qualified for welfare programs — were granted a 4 percent raise. On March 18, 1970, over 200,000 postal workers around the country walked off the job, prompting President Richard Nixon to act — defiantly at first, deploying military personnel to deliver the mail, but eventually caving to union demands.

“The letter carriers and the postal workers brought Wall Street to its knees and within a year’s time forced a new version of the Postal Service, which is the one we have today in which workers have collective bargaining,” Weissman says. “It’s one of the best contracts in the country and so, of course, once I got membership in the union, I decided to be an activist.”

In 2002, Weissman retired from the Postal Service, but stayed on as the Western Mass NALC president for an additional five years before stepping down to work as the coordinator of both the Pioneer Valley Central Labor Council and Western Mass Jobs With Justice.

Weissman’s legacy, according to those who worked with him, is likely to be the contributions he made to organizing a more cohesive movement that brought together social activists and labor groups toward a common cause. He sought to unite disparate community and labor organizations, he says, under the Universal Declaration Human Rights, adopted by the United Nations in 1948.

Michaelann Bewsee is executive director of Arise for Social Justice, a Springfield-based nonprofit social advocacy group. She’s also is an executive committee member of Jobs With Justice and has worked alongside Weissman for more than 20 years.

“One of the things [Weissman’s done] is just showing community groups and labor that we’re all on the same side. He’s worked to make sure that we can all be connected,” Bewsee says. “He’s a guy with an incredible amount of integrity and the kind of values that he’s brought — the real honesty — has improved communications all the way around.”

Ferd Wulkan recently retired as a staff member of the faculty and librarian union at the University of Massachusetts Amherst, where he was active in the union. He helped found Western Mass Jobs with Justice with Weissman and has been a labor activist for more than 30 years. He says that he could always count on Weissman for support during labor disputes.

“For the labor movement to succeed, it has to be grounded in the community, to involve mutual supports between community organizations and union organizations — that idea has really taken hold here in the Valley,” says Wulkan. “I think that Jon is more responsible for that than anybody.”

Weissman also worked toward putting the movement on the offense, he says, campaigning for livable wages, earned sick time, a graduated income tax, and fought raising the cap on charter schools in Massachusetts.

“I was happy to play a role in that,” Weissman says. “It’s not like a great legacy. It’s just the ongoing process of the movement to eventually win. When we win, we can look back and say we accomplished something. Especially losing in the era of Trump, we’re not happy to look back on our legacy.”

Despite some setbacks, Weissman is leaving the movement in better shape than he found it. He negotiated a merger between the two Massachusetts chapters of Jobs With Justice, which is likely to leave the organization in a stronger position. The organization is running a Raise Up Massachusetts initiative, which works with its labor coalition to lay out an annual plan for legislative activism, keeping the movement on the offensive, Weissman says.

“The thing is that the structures that support the attack on the issues is more important than the issues themselves,” he says. “We can take a loss, as long as we continue to hang together, we’ll win in the long run.”

Weissman says he’s looking forward to being out from under deadlines and reporting to spend more time with his four grandchildren, but he says he won’t be sitting idly by. He plans to keep working — just in a more limited role. He plans to focus more on introducing a new generation to the labor movement through the arts.