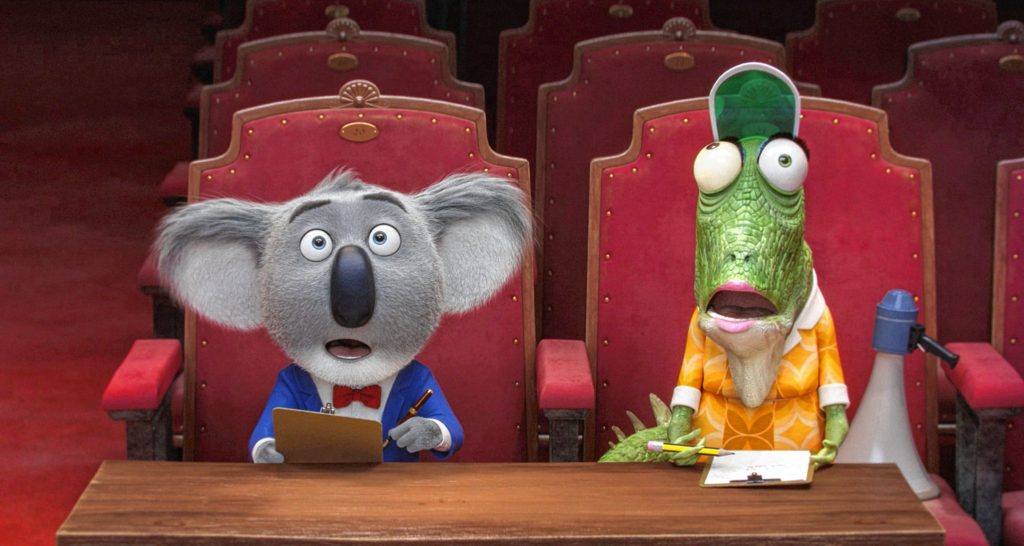 Director Garth Jennings has had an interesting, if short, career. Coming out of the gate with an adaptation of the Douglas Adams cult classic The Hitchhiker’s Guide to the Galaxy in 2005, his first big film grossed many millions, starred people like Zooey Deschanel and John Malkovich, and opened its first weekend atop the North American box office. It seemed like a good start, even if you weren’t a fan of the Adams book.

Two years later brought Jennings’ next film, an oddball coming of age story called Son of Rambow, about a young boy being brought up in a Plymouth Brethren community, and the seismic changes brought on by his introduction to the Sylvester Stallone film First Blood. This was the film that first brought Jennings to my attention; it hinted that the director had a tender understanding of the underdog, and the power of art (and not just “high art”) to help us break out of our shells.

And then: nothing. For almost ten years, he has been so off the grid that his name began to seem more like that of a made-up country music star than a filmmaker. No longer. This week, he is back with Sing, a new film that brings animated and anthropomorphic animals to the world of American Idol and The Voice. And, improbably, he does it with a rich cast — Matthew McConaughey, Nick Offerman, Reese Witherspoon, and many more — which proves that somebody out there still believes in the work he can do.

McConaughey stars as Buster Moon, an upbeat koala with a deep interest in show business. When his own theater is in danger of shutting down, Moon comes up with a Hail Mary: he’ll keep the doors open by hosting a singing competition, offering a thousand dollars to the winner. Problem One: he doesn’t have a grand to give. Problem Two: his assistant Ms. Crawley (a glass-eyed iguana voiced by the director) has printed up notices for the competition with a few extra zeroes added to the prize amount.

What follows is the expected trope of every showbiz story ever: the depressing downs and the dizzying rebounds born of pure “let’s put on a show!” gumption. In that sense, it is a less interesting idea that something like Son of Rambow, which paired the urge to perform with some of our darker cultural tendencies revolving around violence and fame. But it’s perhaps unfair to compare Jennings’ work of a decade ago with this new work. It may well be that he has come to realize that although it is the R-rated fare that at first seems so exotic to young eyes, it is not always what ages best. First Blood, after all, takes place during the Christmas season, but it’s The Muppet Christmas Carol that we come back to most.

Also this week: in Pittsfield, the Berkshire Museum’s Little Cinema brings in the culinary travel doc Ants on a Shrimp for several screenings this week. It is the story of the crew behind Noma — chef René Redzepi’s Copenhagen eatery that has been named the “world’s best restaurant” four times in five years — and its desire to try something different. The result is an adventure few other restaurants could undertake: the star chef and his kitchen pack up the store and travel to Japan to set up a five-week pop-up restaurant in Tokyo. There, they look to expand not only their own international reputation but, more importantly, their own horizons.

As they build a brand-new menu tied to Japanese tastes and ingredients, the crew seek out new and unusual flavors and techniques, never content to settle for easy familiarity. To give you a sense of how highly regarded Redzepi is in the foodie world: the pop-up had a waiting list, after the initial reservations were snatched up, of fifty-eight thousand names. You might want to call ahead for those tickets.