Basemental: What Happened in Oakland 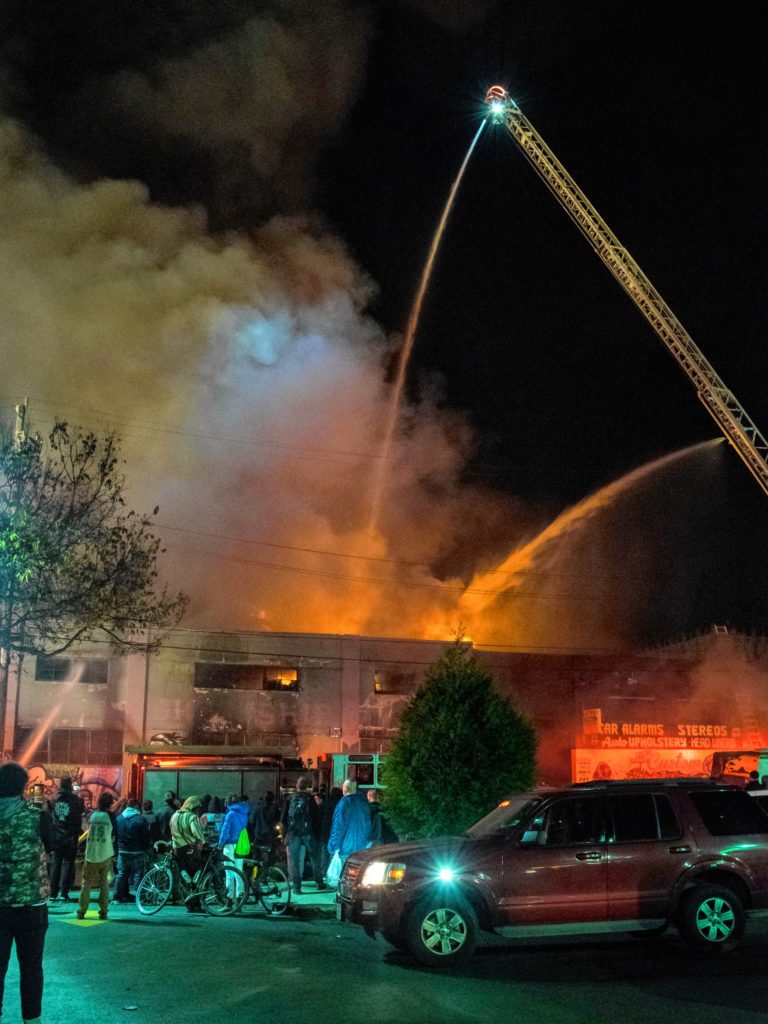 One artist’s reflections on the Ghost Ship fire

NOTE: On Dec. 2, the Ghost Ship, a 10,000 square-foot arts space inside an Oakland, California, warehouse, caught fire during a performance. Thirty-six people were killed, and more were injured. Steve D’Agostino, from the local act ZEBU!, has split time between the Western Mass and Bay Area arts scenes. He was familiar with the Ghost Ship, and lost people close to him. He was willing to talk to me about it, and where we go from here. These are his words. Proceeds from this column will go to support the fire victims. — Will

The immediate aftermath was one of shock, grief, and intense pain for many people here in the Bay Area and around the country. To lose a huge part of a community in one tragedy is an insane feeling, and one that will last with many people for the rest of their lives.

The media coverage of this event has been absolutely disgusting, neglecting many of the real truths about this space. The city had never even inspected the Ghost Ship for fire compliance. It slipped under the radar somehow, and it’s the city’s fault that they didn’t force the occupants to at least fix many of the myriad fire violations that led to this catastrophe.

The Ghost Ship was considered by many who lived there and worked there to be a fantastic and beautiful sanctuary. Many wonderful gatherings have been held there over the years.

My experience there was one of intrigue and minor concern. I remember being caught on that staircase leading to the first floor, trying to go down while others were coming up – which is one of the scenarios that lead to the tragedy. It was a scary feeling to be trapped, and it cuts to the core of the more disturbing aspects of this catastrophe. There were a lot of dead ends. It was a home for many people and served the community well over the years, but it’s very clear that it took the confluence of many years of specific neglect to lead to this tragedy.

Instead of focusing on the sensationalist and myopic details of what went wrong, I think it’s important to ask: what do we do now? Right-wing fascist trolls on the internet are attacking our way of life, making lists on 4chan and other websites to try to prevent us from putting on events. Everyone in the nationwide DIY community is freaking the fuck out, and rightfully so. Spaces are being inspected, people are being evicted, and we are being attacked. What should we do?

Western Massachusetts has one of the most vibrant, thriving, and exciting music scenes in the whole country. So many incredible people are working hard to make spaces that are inclusive and anti-racist, feminist, queer, and anti-ableist. Now is the time to push for what we believe in and the artistic world we are trying to make. Now is the time to turn off the internet and build community the old fashioned way: by starting bands and projects, networking with people, and reaching out to friends and strangers alike. Throw concerts and house parties and events at Flywheel, rent storefronts for pop-up galleries, book concerts at the Five Colleges, and go on the airwaves building a connected scene.

Some laws are meant to be broken, but those laws are not fire codes. Those are meant to be followed, because safety and compliance is part of being an empathetic community – looking out for each other, and making sure everyone can have a safe space to congregate.

In the case of spaces being shut down: we need to flex our political and financial muscle and go to city council meetings and select board meetings to demand community-provided spaces for all people to gather and create. Western Mass is lucky because we have Flywheel, thanks to the very hard work and dedication of Sam Chaplin, Chris Dooley, Meghan Minior and many others. If DIY spots are being attacked, we need only to eat ramen for two days and donate 20 dollars, or whatever we can, to keep them fire code and safety compliant.

We need to be more and more vocal, and advocate for our communities. It’s not impossible. It’s so necessary that we don’t just feel intimidated. We need to fight for our right to create and experience love and joy in the wake of this tragedy.

Basemental will continue discussion of the Ghost Ship next week. Contact Will Meyer at wsm10@hampshire.edu.