Down to Earth: When Life Gives You Lemon Peels, Make Compost 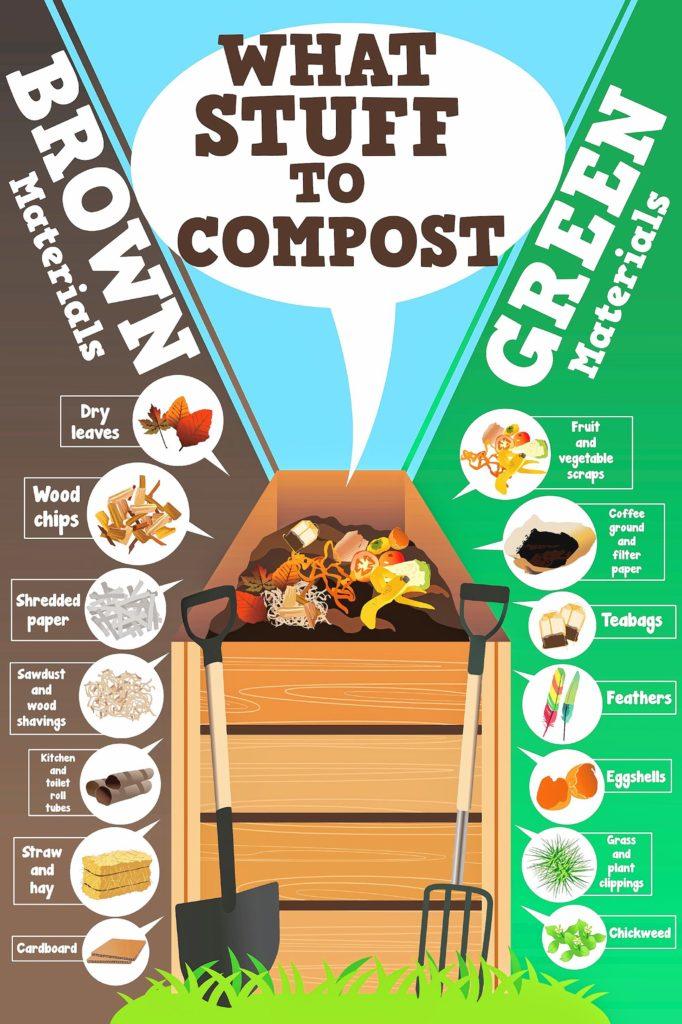 A vector illustration of what stuff to compost infographic

My second, I admit, was less pleasing. I’d begun broadening my idea of what’s compostable, throwing in chicken bones and soiled napkins and a salmon-stained piece of waxed paper, wet teabags and some rice that had gone moldy. I’d failed to line my crockpot with newspaper, a trick I quickly learned to absorb dampness. A brown liquid had pooled at the bottom. It smelled funny.

But it still made me inordinately happy.

For my birthday this year, I’d given myself a present of compost pickup from the Pedal People, the small army of bicycle-riding, trash-pickup warriors who include compost collection among their Northampton services.

An odd gift, perhaps. But whenever I transfer my crockpot of compostable bits to the larger plastic bucket just outside the door, I feel an irreplaceable contentment. Satisfaction fills me when I settle the bucket on the snowy corner of the driveway for pickup, its sealed blue lid labeled “Pedal People.”

Throwing fairly fresh but unwanted food in the trash feels downright wrong when it could turn into nutrient-rich, aromatic soil. Landfills in Massachusetts are expected to run out of space by 2035, and no others are planned to be built in the state.

Although food scraps are biodegradable, once they enter a landfill, they’re unlikely to break down. Below a landfill’s surface, there isn’t enough oxygen for biodegradation to occur.

Plus, landfills are sealed at the base by a liner. That means that even if items degrade, they can’t get recycled into the earth’s system. They’re trapped, useless — and any resulting compost becomes poisoned by toxins from other trash.

“It’s essentially entombed,” says Ellen Clegg of the Pedal People. “If it goes into the landfill, it’s no longer beneficial to our topsoil. It’s like throwing topsoil away, and there’s a finite amount of topsoil in our system.”

Now, for $15 a month, the Pedal People pick up my compost bucket regularly. Because they travel only by bicycle in rain, sunshine, or snow, they also contribute zero climate-changing greenhouse gas to the atmosphere. Their reliance on person-power does, however, limit them to Northampton (including Florence and Leeds).

Alternative Recycling Systems offers compost, trash and recycling collection to a wider customer base in Amherst, Easthampton, Hadley, and Northampton. In towns like Greenfield, however, no pickup is available — residents must take compostables to the transfer station, though Greenfield’s schools have a compost program that started this year.

People can compost in their own back yards, using specially designed bins that keep animals away and the compost organized — scraps in at the top, usable soil out the bottom. But I live in an apartment. I don’t have space for a bin, and can’t garden with the resulting soil. Countertop bins are available, but they’re small.

Plus, unless carefully managed, household compost doesn’t get hot enough to ensure that no pathogens remain in items like meat scraps and bones. Bigger compost heaps generate more heat as they break down, so large operations can handle absolutely “anything that is or was edible,” as the Pedal People information sheet points out, as well as soiled cardboard, napkins, and newspaper.

There are home systems that make meat and dairy composting easier. But I’m the kind of person who prefers the convenience of getting my food scraps collected and taken away.

My newfound enjoyment of composting led me to look into why our region has no organized municipal program to deal with compost — even though a full 25 percent of landfilled waste in Massachusetts consists of organic material.

Part of the problem is the lack of tax-funded curbside pickup “for anything, much less the compost,” said Susan Waite, Northampton’s Recycling and Solid Waste Coordinator. Residents and businesses must organize trash pickup themselves.

Twenty years ago, the city of Northampton started a program to coordinate transfer from restaurants and schools to a composting facility at the Smith Vocational and Agricultural School. For nearly 10 years the program successfully diverted food scraps from landfills. Smith Vocational sold the resulting soil and included compost management in their curriculum.

But in 2004, the school closed the facility due to contamination problems as well as a change in administration, and the program collapsed.

Generators of more than 1 ton of organic waste per week are required to compost by a 2014 state law. So far, the law has generated $175 million in economic activity and 900 jobs, according to a study commissioned by the Massachusetts Department of Environmental Protection.

But only 1,700 businesses statewide fit the requirements. Also, in our area, such institutions — like residents and smaller businesses who choose to compost — must work with an uncoordinated patchwork of haulers and compost-accepting facilities.

Last year, Jonathan Goldman, an 18-year old Northampton High graduate, developed a plan to bring coordinated composting back. But despite interest from the city, the plan got put on the shelf because no cost-effective local compost facility was available, Waite said.

However, Smith Vocational has announced they will bring their composting facility back by this spring, a move Waite believes was encouraged by Goldman’s efforts. “He was a wonderful, effective gadfly in getting our community to start thinking seriously again about having a commercial composting site,” she said.

When just a few people and businesses choose to compost on their own for ethical reasons, it’s unlikely to fundamentally alter the amount of material entering landfills. Only shifts in the system — in rules and regulations, in programming, in modes of living — create enough of a dent.

But the spread of individual action eventually puts pressure on the system to change.

Today, enough people demand compost that businesses like the Pedal People and ARS find the service worth offering.

Perhaps tomorrow, we’ll create another organized city compost program, or expand programs like the one at Greenfield’s schools to restaurants and businesses. Or even vote in municipal compost pickup. In the same way that Northampton now contracts with the Pedal People to collect from downtown trash cans, towns could contract with existing private services to pick up compost.

With an organized system, contributors might even be able to pick up free, or cheap, soil for their gardens — like in Cedar Rapids, Iowa, where compost pickup is arranged by the city and the resulting soil is free. Such a system would also make it less onerous to require all residents and businesses to separate out food scraps and other compostables from their trash.

In the meantime, however, composting will remain up to those of us who can learn to feel joy in the muck. It’s good muck. It deserves roots in it, and green growing things, and life renewed, and the satisfaction of sustainable living.