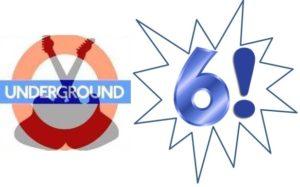 Another year, another milestone. As of today, this blog is six years old. But what is there to make of this anniversary?

Benchmarks of five years or 10 feel more momentous than just another notch added to the belt during the intervening period. And make no mistake this blog has slowed down some over the long haul. For proof, look no further than last year’s birthday post. Longtime readers will even note that last year Northeast Underground didn’t post a Best Of albums of the year feature to close out 2016. The reason for that absence, as well as a diminished number of articles in general, is simple – laziness. Well, laziness, and that old chestnut called time.

John Lennon once sang, “Life is what happens when you’re busy making other plans.” So, yes, life has happened, and a lot of it too over six years. But there still may be a place for this blog moving forward.

If 2016 taught us anything, it was a few, short powerful lessons. First, how to say goodbye. The list of last year’s dearly departed is too long to list without fear of accidently forgetting someone. Second, how not to be afraid of trying new things, while simultaneously being butt-clenchingly scared of potential new things and changes looming on the horizon. And lastly, how to make peace with it all and push ahead anyway.

From humble beginnings, to the highs of being tweeted about and shared by notable artists and musicians, Northeast Underground is still standing after six long years, and it would be too easy to joke that hopefully America will still be standing six years from now (or even four). Yet, another year and another milestone can actually add up to quite a lot.

If you’ve hung in there this long, keep hanging. If you’re new here, welcome. Just remember to keep digging (and not just out from under a pile of snow). You never know what might turn up when you venture a little underground.