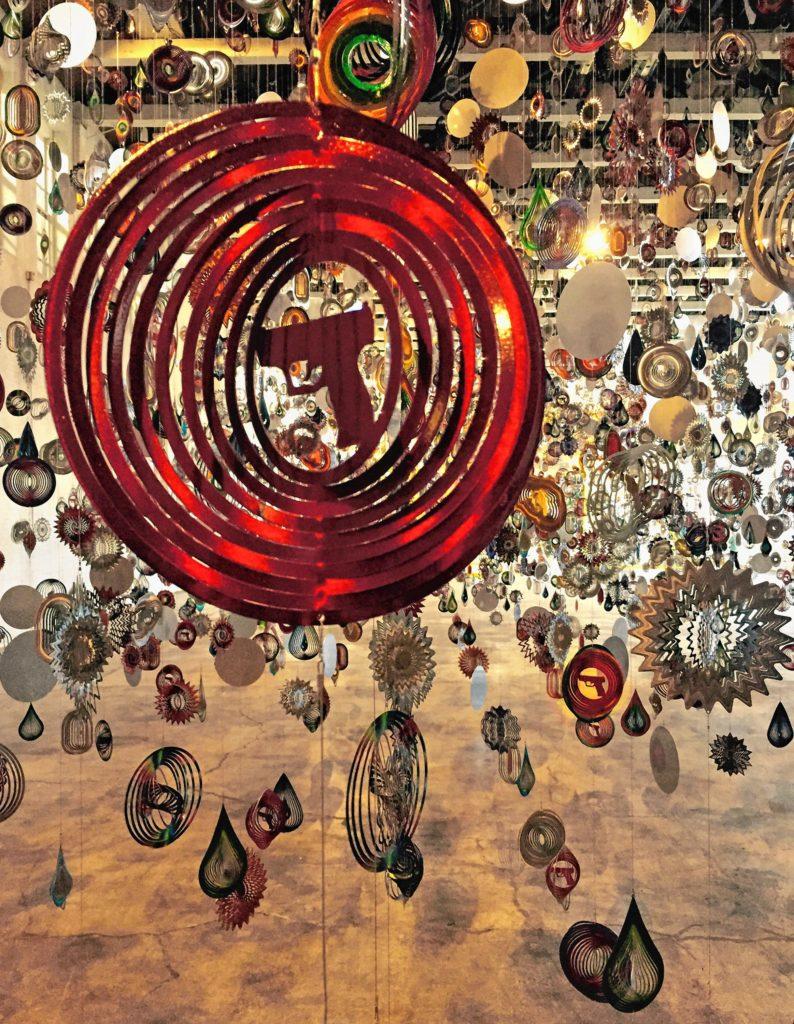 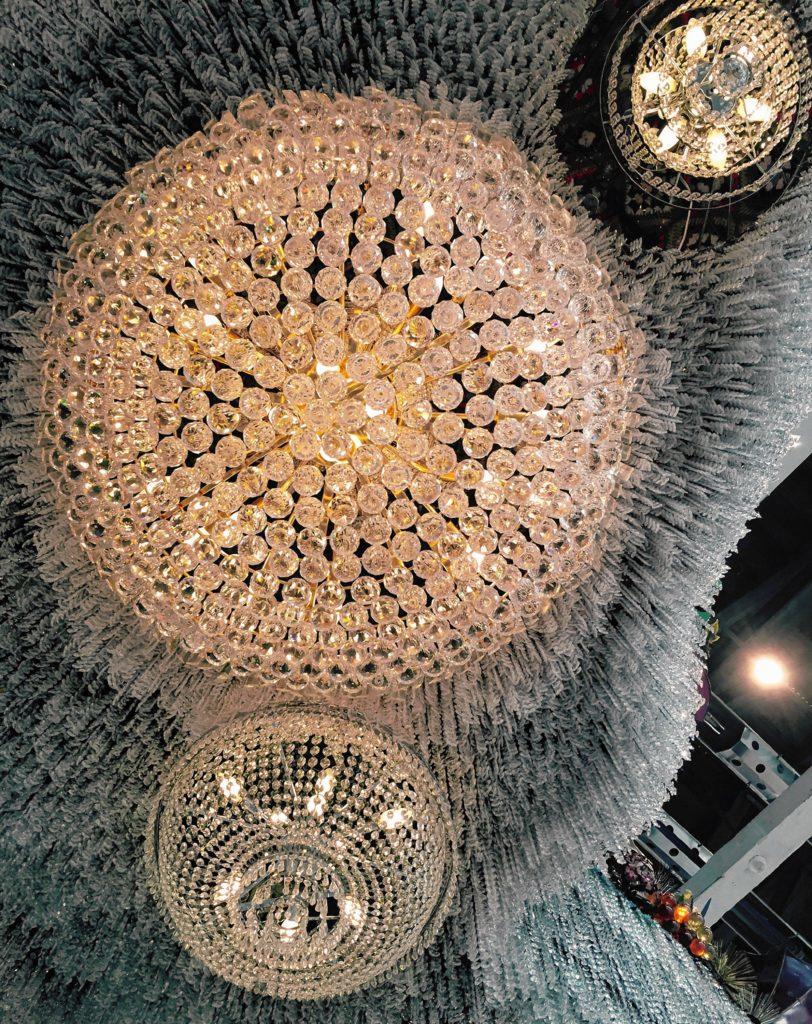 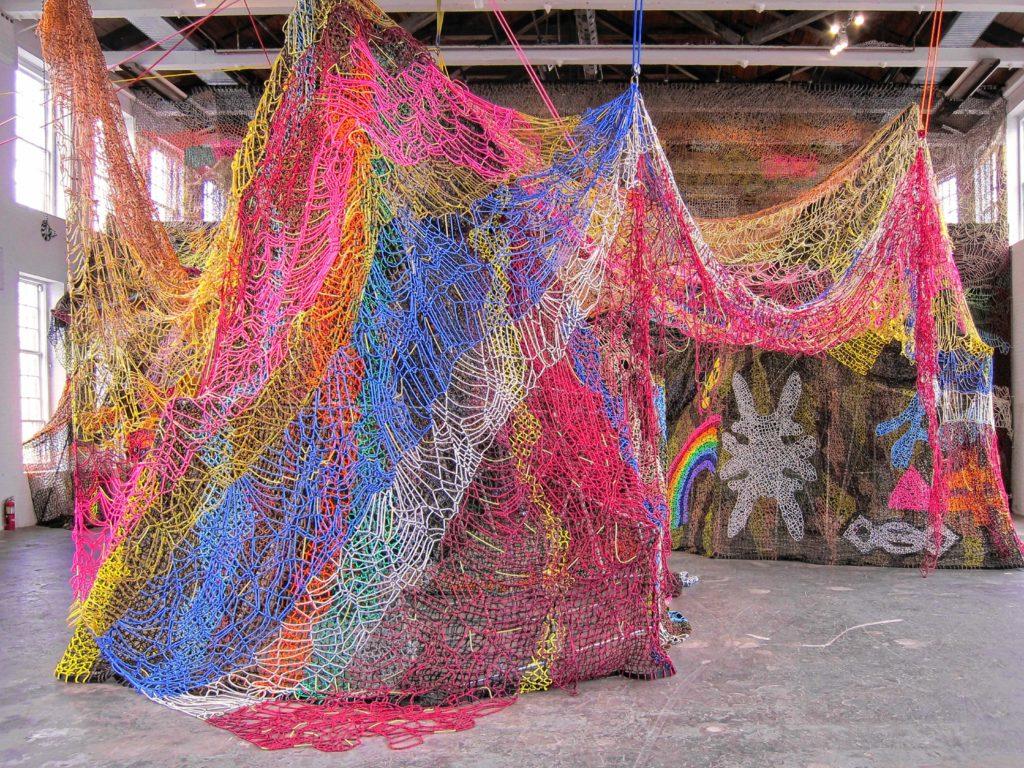 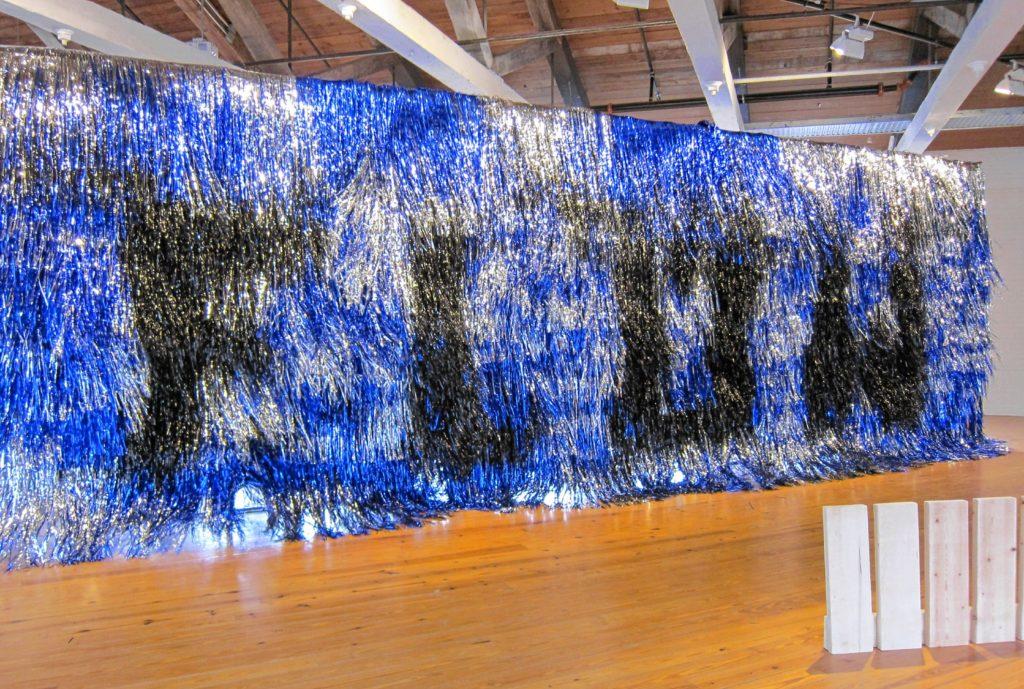 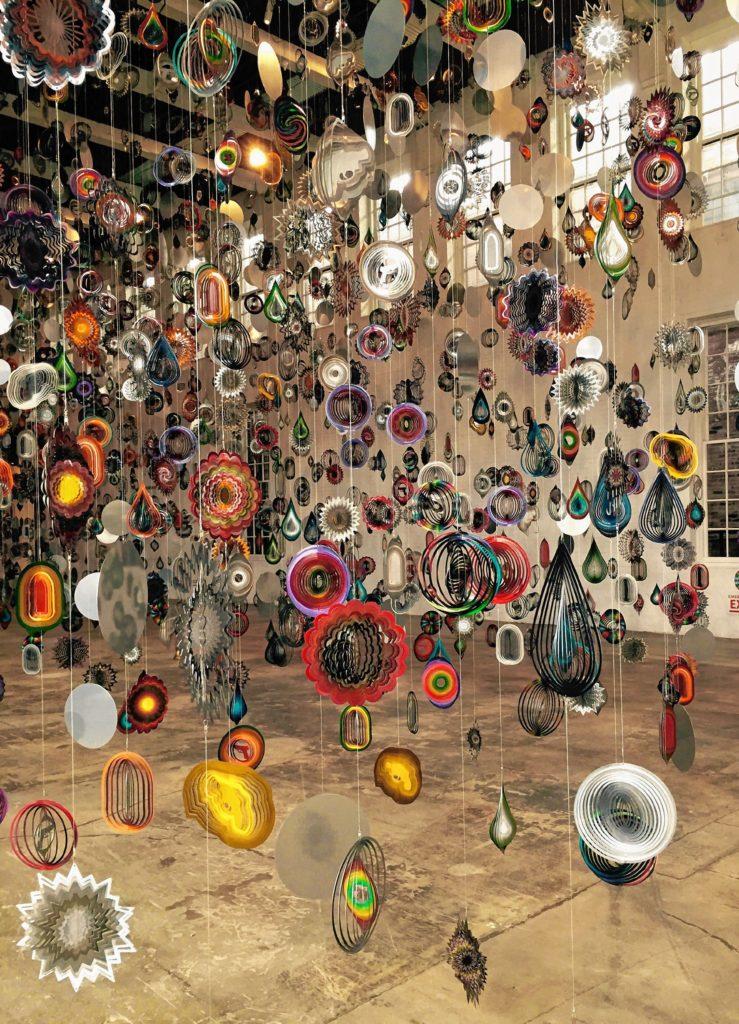 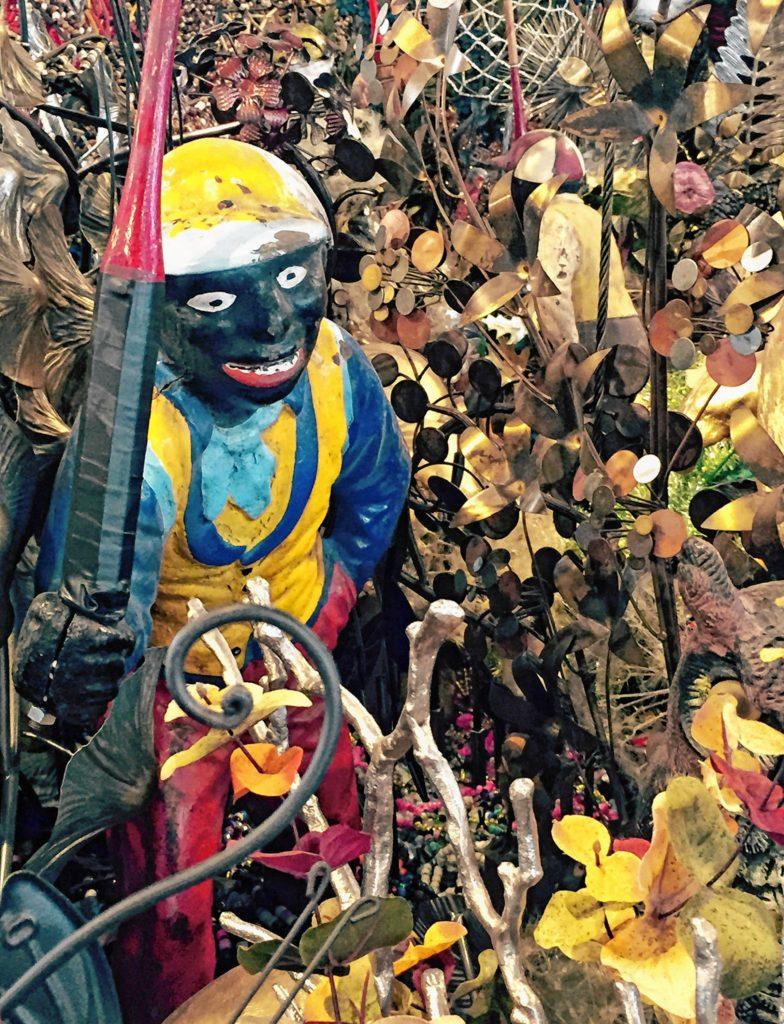 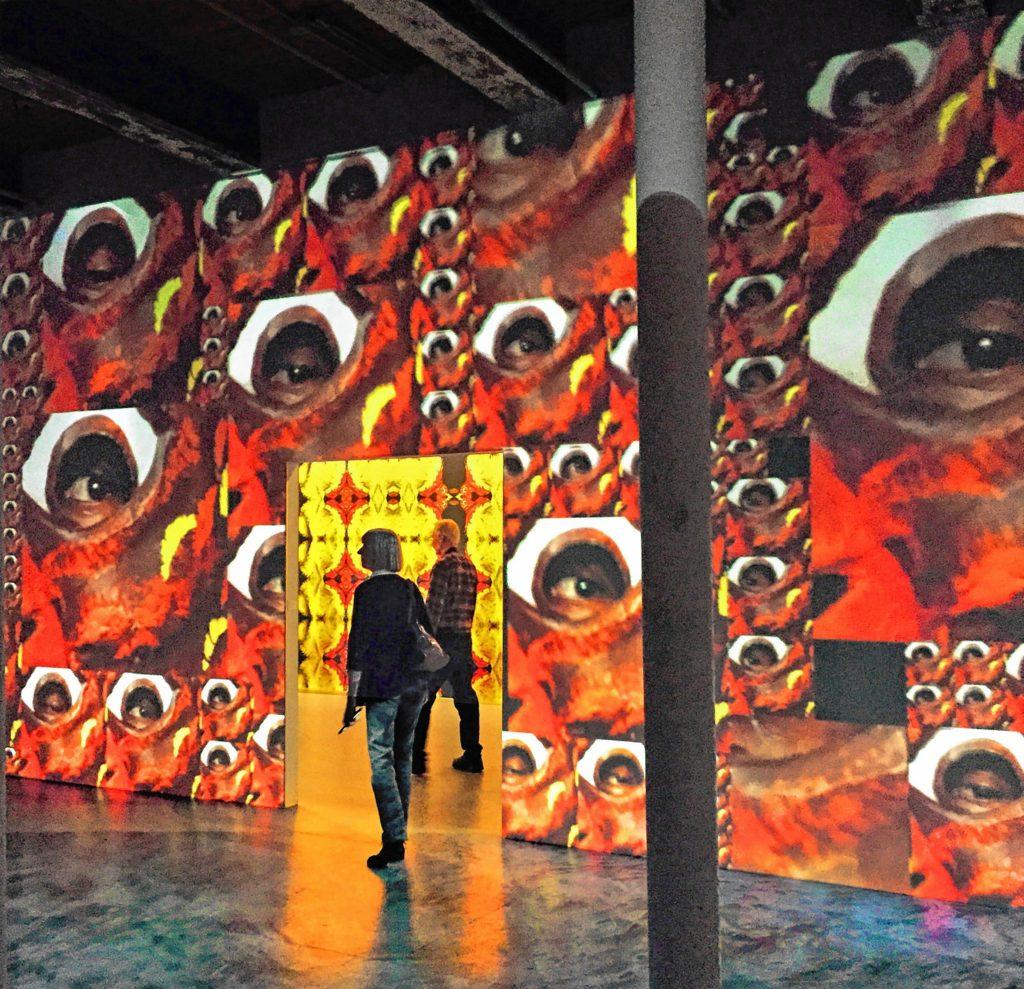 Nick Cave begins his immersive installation Until with a question: Is there racism in heaven? Instead of providing an answer, he has constructed a sequence of experiences spanning a gallery the size of a football field at MASS MoCA. With the title, Cave pivots on the legal phrase “innocent until proven guilty” to reflect its reverse: “guilty until proven innocent” — as with African Americans like Trayvon Martin, Michael Brown, Tamir Rice, and Eric Garner.

Until begins with a floor of reflective panels before plunging into a maze of suspended wind spinners. The blurred reflections merge dimensions — what’s up in the air is also down under our feet. Strands of metallic wind spinners increase the enchantment. Motors keep the wind spinners twisting in fluid motion. Strategically placed lights sustain the metallic sparkle, further enhanced by solid disks coated with silver dust. Whirling and sparkling, the metal ornaments evoke, large scale and big time, the playful delight of a child’s pinwheel.

But there’s a catch. About two-thirds of the spinners are standard patterns that Cave selected from a manufacturer’s catalogue, but the remaining third display patterns custom-designed by the artist: guns, bullets, and targets. Even when you know enough to expect them, these guns and bullets still blast into view with the shock value of explosive violence. The inherent swivel of Until flashes out with each spinning bullet.

Following this forest of spinning metal, an open area contains crystalline clouds of heaven — suspended two stories high. The underside is a sparkling mesh of crystal beads woven into and around multiple chandeliers. Four sturdy ladders lead to viewing platforms, revealing heaven as a cluttered mass of found objects. Reclaimed from thrift shops, antique stores, flea markets, Craigslist, and family cupboards, the items seem both cherished and rejected from their past lives.

Attractive when assembled altogether, each is somewhat ugly in isolation. And some are very ugly in implication: among gilded pigs, ceramic birds, metal flowers, and myriad baubles are seventeen blackface lawn jockeys. The lawn jockeys connect to Cave’s previous work incorporating and transforming racist memorabilia. Woven into an exuberant mass of found objects, the lawn jockeys suggest that racism is deeply embedded, even in heaven.

With his artwork, Cave wants to help people across communities find common ground. The physical structure of heaven, however, tends to emphasize how isolating individual perspectives may be. The view from each platform is unique, and the jumble of objects so dense that you can’t see other people on other platforms. What you see is limited and defined by your position, and you stand alone in your own perspective.

After clambering ladders to view a heaven of aesthetic detritus and confronting the complexities of lawn jockeys, it’s a relief to enjoy the sheer beauty of beaded curtains draped at the far end of the installation. Adjacent to that, the darkened, enclosed space under the mezzanine is drenched with disorienting, ever-rippling images of water. Dancing figures, including a blackface Gumby, cover the walls and multiply into manic patterns intensified by strobe effects. Upstairs, a wave of silvery blue Mylar spells out “FLOW” in darker letters. Slender strands constantly flicker due to industrial-sized fans, which create an audio effect as well as a serious breeze.

Quantifying the volume of material that comprises Until — millions of beads, miles of crystals, thousands of wind spinners, thirteen gilded pigs — conveys size (which is huge) but distracts from scale (which is intrinsically human). Cave describes Until as a theater set and a community forum as much as sculpture. Overall, Until offers a participatory journey. Hanging in the balance are open-ended questions of race and racism, vulnerability and violence.

Nick Cave: Until runs through Sept. 4, 2017 at the Massachusetts Museum of Contemporary Art in North Adams. For a schedule of performances related to Until, visit massmoca.org.