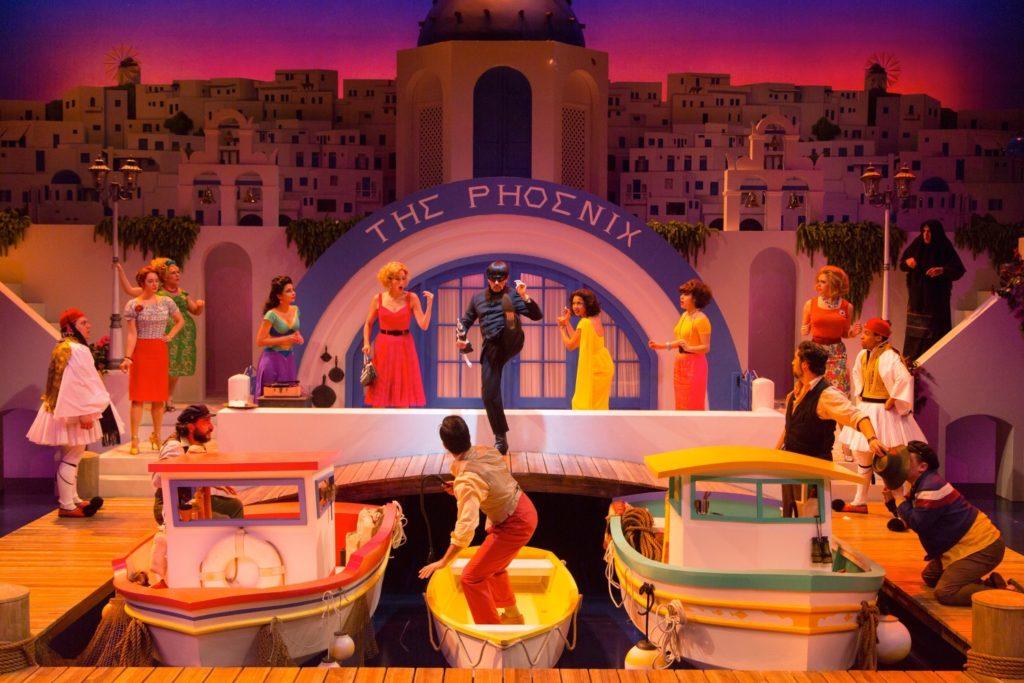 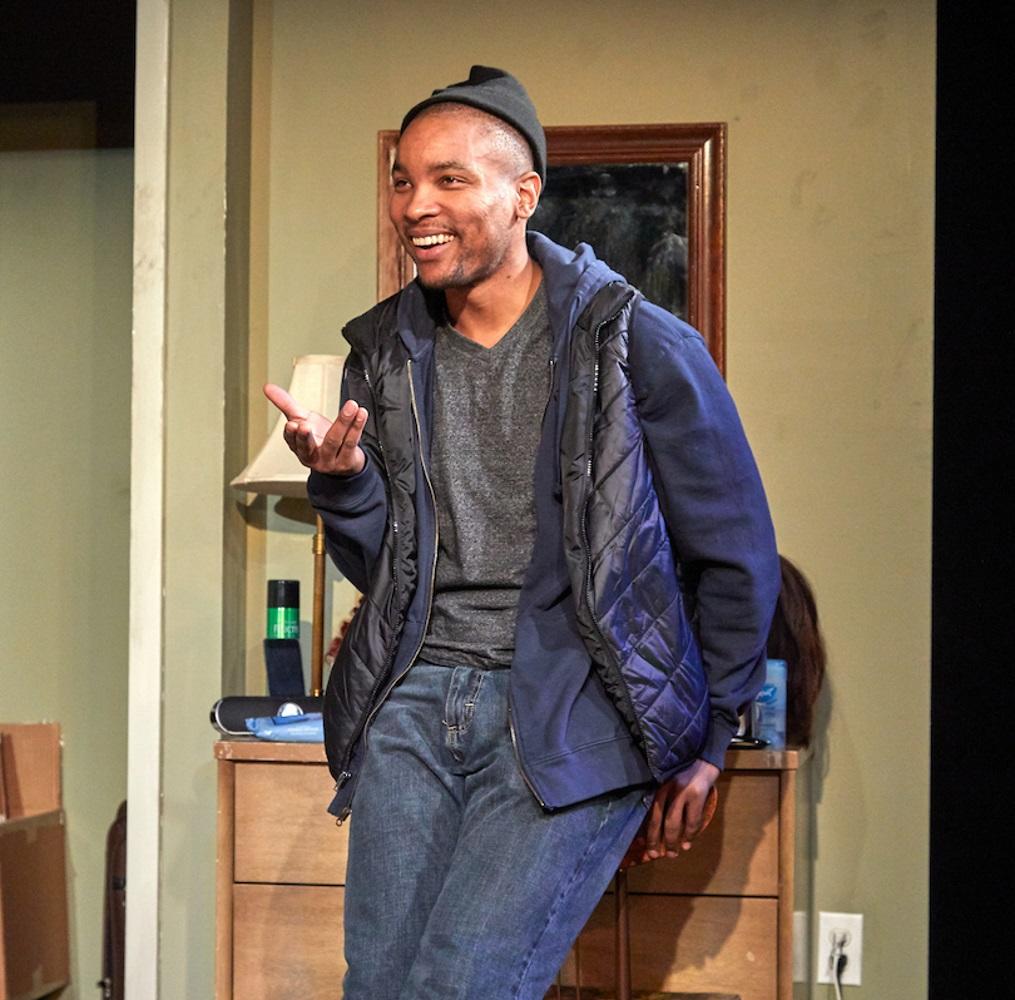 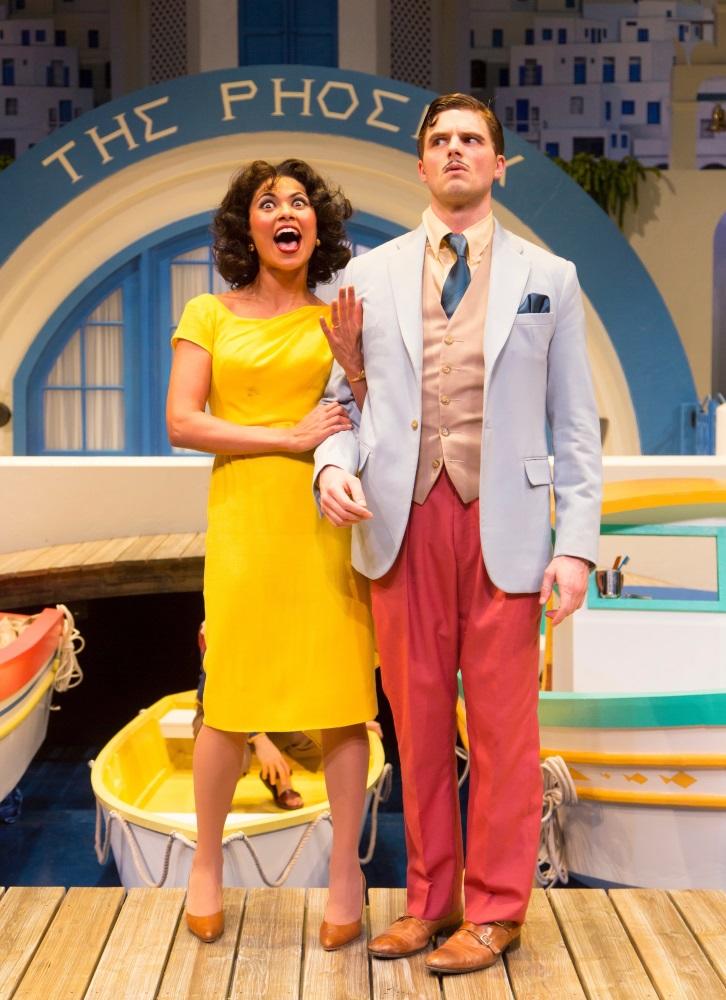 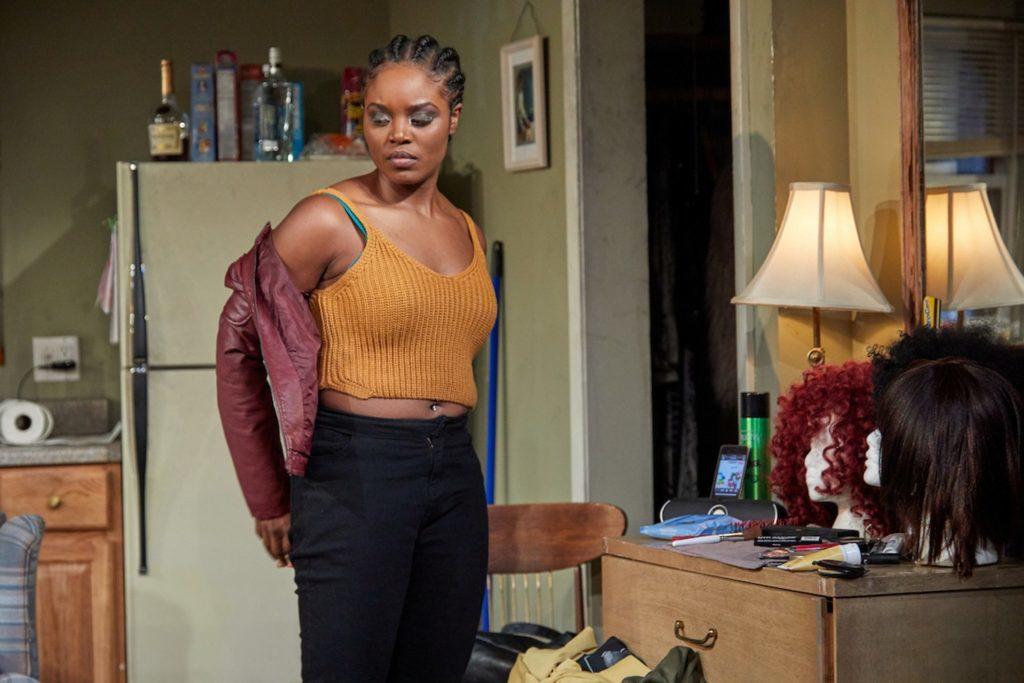 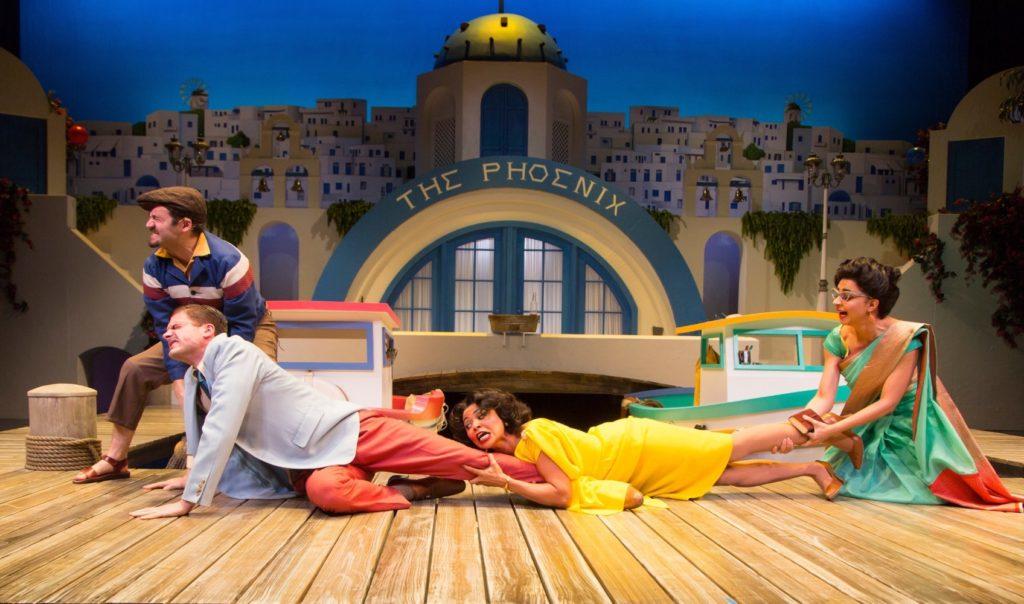 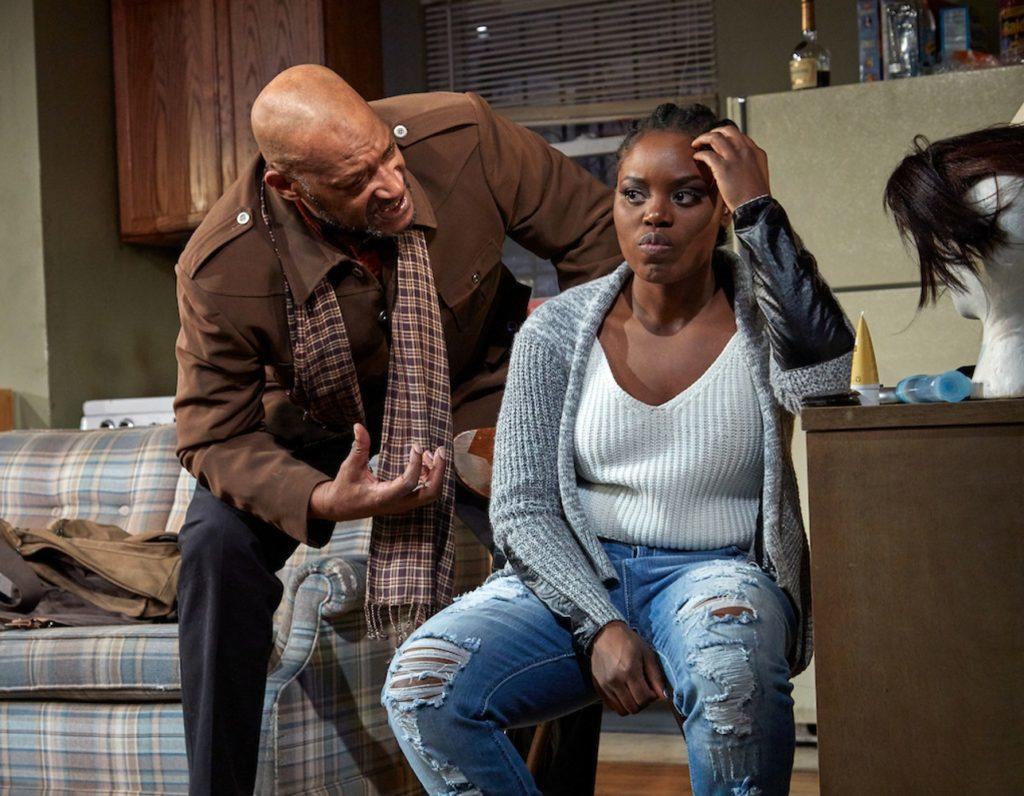 The two shows now playing at Hartford’s rep theaters couldn’t be more different, but they still share some core themes. They are Shakespeare’s rambunctious, large-cast Comedy of Errors, at Hartford Stage, and Dominique Morisseau’s small, intense contemporary drama Sunset Baby, at TheaterWorks. Both run through February 19.

What they share, expressed in diametric ways, are a focus on lost or estranged parents and their children, and crises of identity: Who are you really?

Sunset Baby, forcefully directed by Reginald L. Douglas, revolves around three entwined African-American characters: Nina (for a living, she says, “I sell dope and rob niggas”), her father, Kenyatta, and her lover and business partner, Damon. Nina and Damon dream of fleeing inner-city Brooklyn for sunny foreign parts once they’ve amassed enough of their criminal cash. Kenyatta, having spent years in prison for his involvement in the 1980s Black Power movement, shows up wanting to reconnect with his daughter but, even more, to lay eyes on the bundle of letters Nina’s mother wrote to him before she died from crack, but never sent. 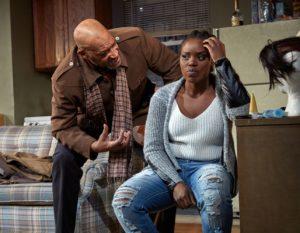 The 90-minute play unfolds in a series of blistering two-person confrontations as Nina furiously rejects her father for abandoning her and her mother, while sidestepping Damon’s awkward attempts to bring her closer to him. Brittany Bellizeare is scorching as Nina. We first see her dressing up as a street whore, the bait to mug would-be johns, and for much of the play she’s dressing and undressing, as if searching for a skin she can feel at home in. She’s made herself hard and cynical, and when each of the two men try to crack her shell she’s explosively defensive.

Carlton Byrd gives a mercurial performance as Damon – a fast-talking, street-tough hustler who may or may not be the ultimate survivor Nina says he is. As Kenyatta, Tony Todd is a bit of a weak link in the play’s interlocking chain. This man who has sacrificed his family and his prime of life for a cause is beyond anguished, but I never quite got past the actor into the character’s depths.

Nina, we learn, was named for the great, volatile Nina Simone, whose music, winding through the scenes, is her namesake’s solace. Kenyatta has adopted the name of another radical, the anti-colonial Kenyan revolutionary whose tactics anticipated Malcolm X’s “by any means necessary.” In a program note, Morisseau (whose Paradise Blue premiered at Williamstown Theatre Festival two seasons ago) pays tribute to “all the Black activists that have shaped the world in which I live,” and frames her play’s key questions as “How do you build a world and a home at the same time? What gets lost in the struggle?”

She also honors Tupac Shakur, whose hip-hop tracks run through the production as well, and whose life and death embodied another painful question for the playwright: “How can my generation be so brilliant and so self-destructive at the same time?”

Bard on the Beach

The broken familial link in The Comedy of Errors, of course, is the twin Antipholuses, lost from each other and their parents in a shipwreck, and the “who are you?” question is the crux of the plot. When Antipholus of Syracuse and his comical slave Dromio fetch up in Ephesus, where both men’s identical-twin brothers live, the mistaken-identity errors grow and proliferate.

Darko Tresnjak, Hartford Stage’s artistic director, has set his pell-mell, 90-minute production in a 1960s movieland Greece. The show begins with a riff from “Zorba” and a courtesan (Paula Leggett Chase) crooning “Never on Sunday,” accompanied by a pair of multi-instrumental boatmen (Louis Tucci and Alexander Sovronsky, a Shakespeare & Company veteran). The set, designed by Tresnjak, is a montage of sun-bleached walls and waterfront boardwalks spanned by stairways and footbridges, and scene transitions are populated by muscled beach boys pursuing bikini’d babes. 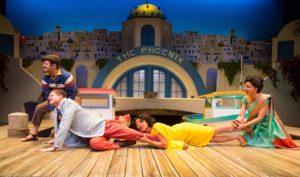 “Concept” settings for Shakespeare are almost de rigueur these days – Tresnjak’s Romeo and Juliet last year borrowed from 1940s Italian cinema – but I didn’t get the point of this one, despite the director’s program-note explanation about his fondness for madcap comedies of the sixties, along with early Bollywood, all of it “hot and cheesy and irreverent and expressionist,” which he finds a fitting vehicle for this zany Shakespearean farce.

But unless you read the program, you’d be puzzled, for example, by the Bollywood dance number and the sari worn by one of the women. And although the setting is ostensibly Zorba country, if you didn’t know that the city of Ephesus was in what is now Turkey, you’d wonder why the local constabulary are uniformed in Aladdin pants and Turkish fezzes.

The point, I guess, is that since Shakespeare’s script is a mix of traditions – blending a Roman comedy and a Greek myth with Commedia dell’Arte shenanigans, and a plot sewn from a tangle of farcical confusions – a grab-bag production that mixes surfer-movie extras with vaudevillian hijinks (including actual slapsticks) should be just the ticket. Which, given the program note, I could have lived with, if Tresnjak’s vision wasn’t also riding on noise and motion for its own sake.

My impression, watching this and other Hartford Shakespeares, is that the director sets a course and a tone and then leaves the actors to it. Here the vector is headlong, the pitch is piercing, and the actors mostly play glib variations on caricatures from various schools of comedy. At one extreme we find Jolly Abraham as Adriana, wife of the Ephesian Antipholus, who most of the time is top-of-her-lungs pissed off (and tipsy), contrasting with a relatively restrained Mahira Kakkar as her sari-draped sister.

As the twin Antipholuses, Ryan-James Hatanaka and Tyler Lansing Weeks ring divergent changes on the suave man-about-town, not even bothering to mirror each other’s mannerisms. The evening’s most clownish performance (aside from Tara Heal’s astonishingly athletic turn in the most spherical, un-PC fat suit I’ve ever seen) comes from Matthew Macca in a mugging burlesque as one of the two Dromios. As his twin, Alan Schmuckler is the only one of the leads who understands how to get a laugh by underplaying the gag.

In the end, this scattershot production seems to be having its own identity crisis. It can’t quite decide who or what it really wants to be.