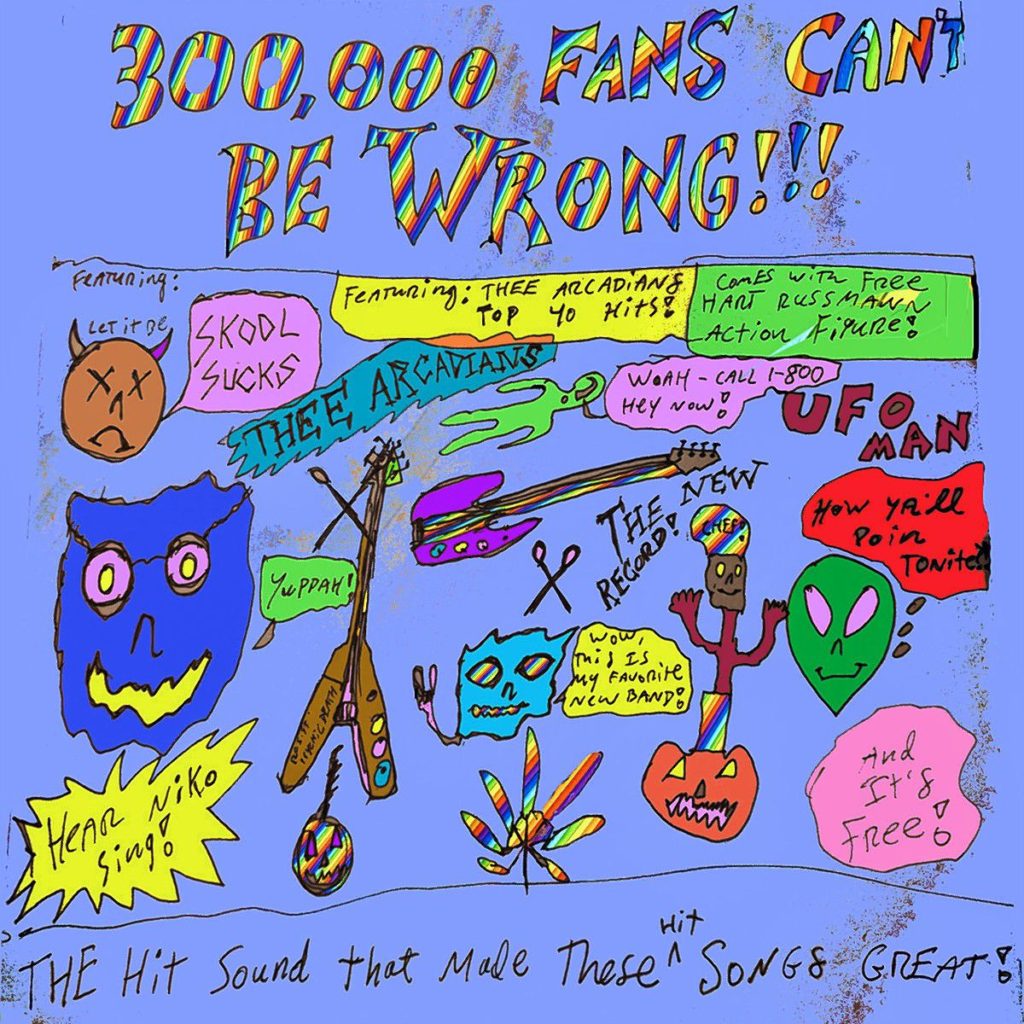 December brought with it not one, not two, but three releases from Florence psych punks Thee Arcadians — Ian St. George on guitar, Nico Lapinski on bass, and Elliot Hartmann-Russell on drums. Sure, it sounds like maybe they just put up a mic in band practice, but there is an ocean of material that demonstrates musical depth, musical sea creatures, and musical water pollution. Whether or not said ocean is acidified is up for listeners to decide.

On Dec. 3, Hartmann-Russell emailed me at 1 a.m. to announce the 15-track album 300,000 Fans Can’t Be Wrong. The title — which references a live Beatles album with the same title — is sarcastic to say the least, with what can only be described as cult appeal. To call it an album wouldn’t be right, but neither would it to be right to call the songs just B-sides. It is its own kind of unkempt monster.

300,000 Fans starts with a 15-second flute track where two members — in a speaking voice — announce that 300,000 fans can’t be wrong. This sets up for all types of half-songs, interludes, and inside jokes delivered through a funnel of distorted guitars, sloppy drum fills, and growling lo-fi vocals. In addition to a song called “Pissing off Derive,” (Derive is a local art-punk band), they cover the Beatles (at least parts of “Revolution” and “Let it Be”), The Replacements, and Teenage Fanclub.

The next day, Dec. 4, they released Strange Shadows, a six-track EP chock-full of long, meandering psych jams. Forget the rowdy, upbeat punk appeal of the other releases. Here Thee Arcadians look inward — at least musically — and slow down to gaze out at the rest of said ocean. They channel Ty Segall’s more melancholy side, with the drums in the background, and the vocals — if any — merely a texture. Joined by Carinae guitarist Calvin Parent, who adds a layer of surf, Shadows was recorded in one evening at Isle 229 back in October.

Then on Dec. 30, Thee Arcadians released Pool In The Morning, which is as close as they get to typical album fare – and more than that, the type of music I’ve come to expect from them. Wearing their influences on their sleeves, the band channels Hüsker Dü and Dinosaur Jr., delivering their take on ’90s rock with plenty of hooks to get caught on. In addition to “Pool in the Morning,” the killer opening title track, there is also “Ecstasy in the Morning” and “Climbing Apple Trees in the Morning,” communicating all the things punk bands — not your stereotypical early crowd — might do, well, in the morning.

Collectively, these three releases, with more than 80 minutes of music, are more than some musicians release in their entire careers — and not only that, but a wider range. It could convey spitballing in the practice room or an ambitious, hard-working band, depending on how you hear it.

Despite the (objective, indisputable) fact that 300,000 can’t be wrong, Thee Arcadians may not appeal to such large numbers. But those to whom they do are not wrong.

300,000 Fans Can’t Be Wrong, Strange Shadows, and Pool in the Morning are available on Bandcamp.