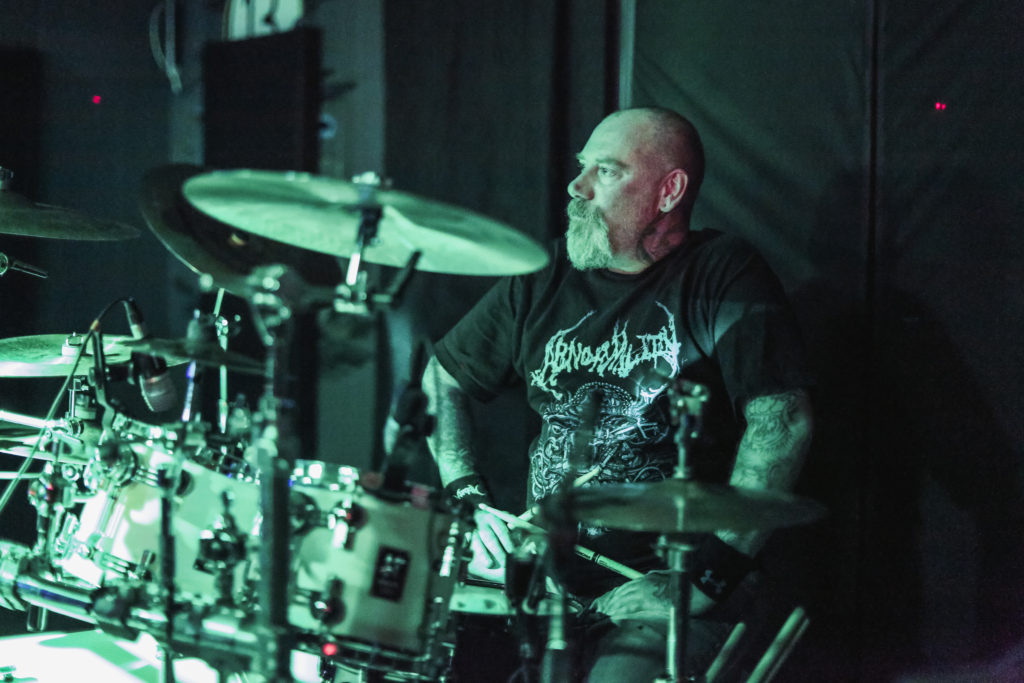 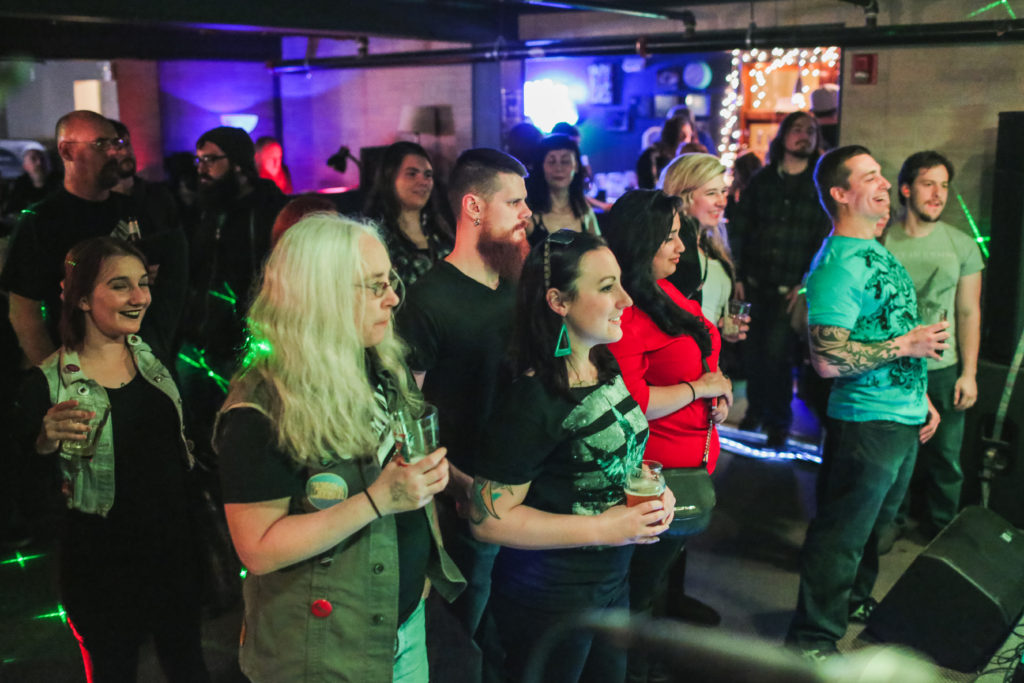 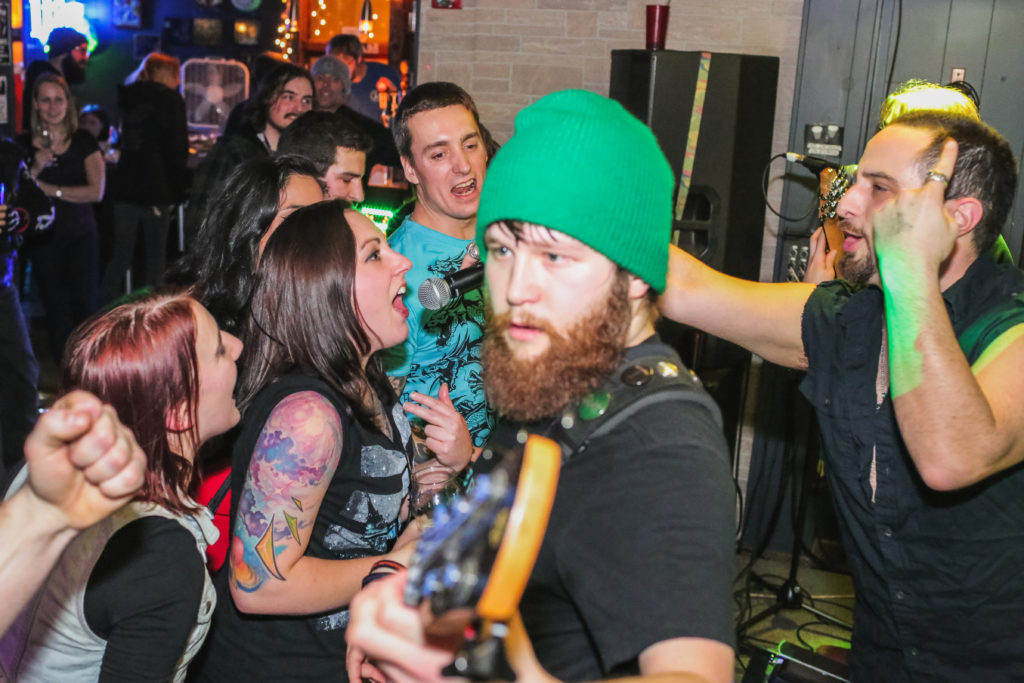 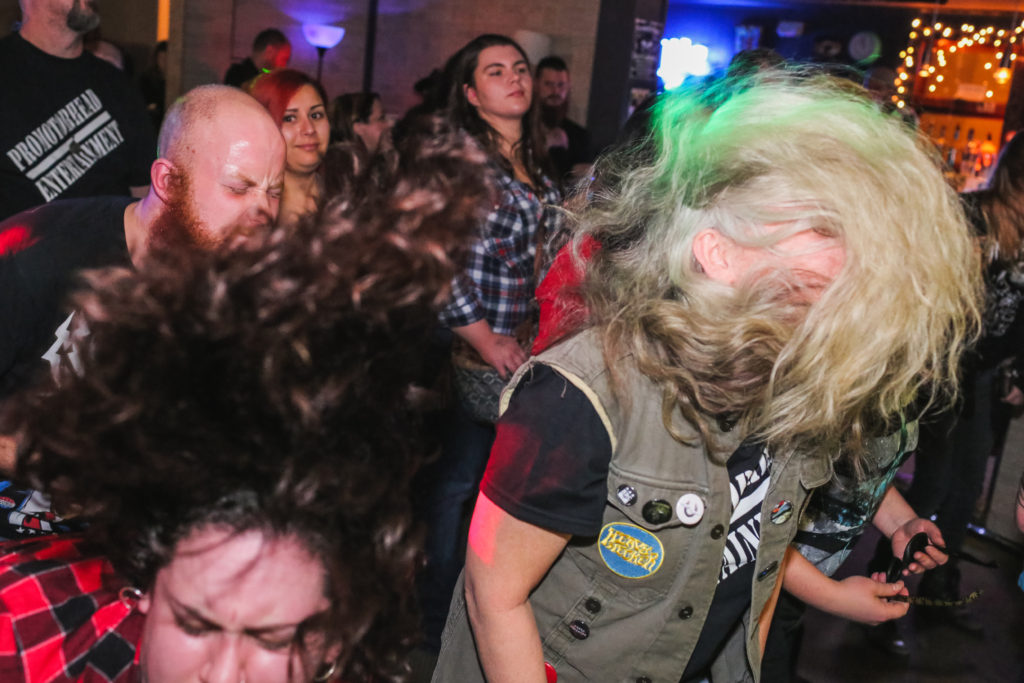 The Fifth Annual PromoterHead Metal Show in February at the 13th Floor Lounge in Florence.

Wesley Jillson has been a part of the local metal music scene since the ’80s. He saw Western Mass area metal rise to national prominence in the ’90s, then fade away by 2010.

At the fifth annual Promoterhead show at the 13th Floor Music Lounge in Florence in early February, Jillson was standing at the highboy tables, talking with friends he’s met at metal shows and drinking a cocktail while Disguise the Curse was on stage. The scene has grown over the last decade, he says, and he’s damn thankful.

“I am an old man, I didn’t know there was still a metal scene … I have social anxiety and never thought I would go out and do things on my own,” Jillson said. “But I got hooked on metal and here I am, showing up at the show alone, having a good time.”

Despite all the black clothing, spikes, and tattoos, heavy shows are a friendly refuge for many people — and one that’s been booming lately.

“When I started going to shows [in 2008], the rooms were empty. Now there are so many people and festivals in Western Mass,” says metal fan Zack Smith, 23, of Northampton. “Metal has the community but not the bullshit.”

Western Mass has long had a large and diverse music scene — particularly when it comes to heavy music. In the ’90s, the area was flush with metal bands. Some of them gained international notoriety, such as Killswitch Engage and All That Remains. Others, like Converge, Bane, and Unearth, killed it on national and regional stages.

But the scene was too big for the area to handle. Howard Jones, formerly of the Western Mass bands Killswitch Engage and Blood Has Been Shed, and now with LA-based Devil You Know, says the Western Mass scene crumbled under overexposure.

“You got a bunch of bands coming from an area, and every record label is just kind of going for that sort of sound,” says Jones. “Overexposure happens. It happened with hair metal, grunge, pop punk … things cycle. People then just move on.”

Scott Manchester, the singer for local band One Ton Tommy Gun and the former frontman for Flatlined, says the underground scene blew up, moved out of Western Mass, and over time dried out.

“The mainstream influences sort of got it bigger. It went kind of commercial, which isn’t bad but it’s not the same,” Manchester says. “The industry succeeded in profit,” he says, but left the underground scene weaker. “Now, it’s hard for heavy bands to make it.”

Heavy music is once again thriving in Western Mass, with the opening of new venues booking heavy bands and the proliferation of musicians and fans over the past five years or so. This expansion of heavy music, however, may be growing faster than Western Mass can handle — again. This time around, scene stalwarts, promoters, and bands are working to make the metal scene sustainable in Western Mass.

That means making sure not to oversaturate the market with too many shows booked on the same days while exposing fans to new heavy genres they may want to support.

The Fifth Annual PromoterHead Metal Show in February at the 13th Floor Lounge in Florence.

A diversified music scene is a successful music scene, but that doesn’t mean everyone’s coordinated. There are some nights in the Valley where metal fans can choose between three shows in the area. Options are wonderful, but multiple shows for the same type of music splits the audience — and ticket sales.

“Sometimes it seems like there are more bands than the area can handle, which isn’t good for bands or venues,” says Brian Westbrook, 28, of Greenfield, the drummer for Lich King. “Lich King tries to play a show every three to six months in Western Mass to avoid this.”

But, he adds, “People don’t stagger or coordinate their shows.”

In the past five years, new heavy music venues and bands have become more visible. For example, the Valley is home to two killer metal fests: RPM and Hothfest. RPM Fest is put on by John Gulow through Promoterhead Entertainment. Now in its fifth year, the multi-day outdoor festival in Greenfield features 30-plus bands. Hothfest is an annual two-day fest in Chicopee, also featuring around 30 bands. It’s put on by Jamie Cross, 48, drummer for Disguise the Curse and owner of Nightmare Tattoo in Westfield.

“The scene has grown a lot. There are tons of local bands now,” Cross says.

Today, there are about eight venues in the area that reliably feature metal music several times a month: The Arts Block in Greenfield; 13th Floor Music Lounge in Florence; Waterfront Tavern in Holyoke; Maximum Capacity and Cabot Pub, both in Chicopee; Shenanigans in Westfield; The Tank in Agawam; and Shea Theatre Arts Center in Turners Falls.

The Arts Block is a newer venue to the metal scene. The venue began booking heavy shows about a year ago. Now there are around three metal shows a month at the Arts Block. Ben Goldsher, 25, co-manages the Arts Block with his brother. He says the metal scene is one he wants to support. It makes sense as a venue owner, he notes, because the bands have dedicated show-going fans.

“As a venue we want it to grow,” Goldsher says. “We want this to be an outlet for people and we want to help the metal scene.”

Eventually Goldsher, a heavy music fan, says he would like to host metal festivals.

Local metal promoter John Gulow, 29, of Easthampton, started booking bands in 2011 to help make sure his musical friends would get paid fairly.

“My friends would always get screwed over,” says Gulow, founder of Promoterhead entertainment group and general manager at The 13th Floor. “I wanted to promote to make sure the bands got fairly compensated as well as help them get shows booked.”

Gulow is a big part of the metal scene’s resurgence, area metal fans and bands say. He books metal shows at the 13th Floor and Shenanigans, among other venues stretching all the way down to Connecticut.

“When I started booking shows the sound was similar,” Gulow says. “A lot of metal core, the same kind of bands. I try to bring in other sounds from outside of the area.”

And now Gulow is attempting to get people to listen to unfamiliar sounds. Some promoters only book certain styles of metal, and the division seems to reach down to the fan base. Described as “clique-y”, concertgoers often seem to go to see the same band rather than travel to see new bands, says Goldsher and Gulow. Promoterhead aims to diversify the metal crowd. Gulow often books acts ranging from punk to death metal.

“There is some clique-yness,” says Zack Longhi, guitarist for local instrumental progressive metal band Writing in the Skies. “Promoters have their crowd that they know will turn out and they serve to that. Generally though I think the metal community is open-minded and supportive.”

Jones reflects on the early days in the Western Mass metal scene as a fun and “innocent” time, playing at houses and small venues before the large stages and stadiums.

“Shows then were a lot of fun. There was a lot of bands crossing over to the metal aspects of the hardcore scene so you had a mix of everybody,” he says. “No one was thinking of it as a career … You got in a band because it was fun to play stuff that was easy to mosh to or play cool breakdowns to.”

Manchester remembers the late-’90s metal scene as vibrant and large; that’s when he was back with his band Flatlined, which fused metal and harcore. Known as metalcore, the stylistic mix of heavy metal and a punk-influenced hardcore became one of the stronger and more unique genres coming out of Western Mass.

“No one was judgemental, it was really positive. If you had nowhere to go it was a tight-knit group. It was the only place that really was an outlet for me,” Manchester says. “People deal with stuff every day and there’s no outlet, so seeing the passion and how kids turned negativity into something constructive was amazing.”

The reason that Massachusetts is a hub for heavy music is up for debate. Manchester credits the amount of good musicians to come from Massachusetts and their desire to make heavy music. There are a lot of people who need an outlet, and metal was just that for a lot of kids in Western Mass, Manchester says.

Jones says it probably grew out of boredom — and great talent.

“I think being in places where there isn’t a lot to do breeds that [music],” Jones says. “People spent a lot of time with their instruments. Then bands were almost incestuous and everyone was playing in everybody else’s band. I’m sure that happens in other places, but not like in Mass. Everybody did it. I don’t know why, it just kind of happened.”

The future of metal is unclear. In the past, the scene had gotten large, then died off. Venues have suffered and bands have disappeared. Venues that used to book metal shows, including Pearl Street in Northampton and Fat Cat in Springfield, don’t schedule heavy music as much anymore. Others, such as Katina’s Night Club in Hadley as well as Infinity and Mikaras, both of Springfield, closed.

But bands made from some of the guys from the old metal scene are coming back, accompanied with new bands and a younger crowd. To many, the future of metal looks bright. Westbrook sees an inevitable peak and drop-off, but remains optimistic that the scene will explode. Goblet’s Nick Sacco sees potential for Western Mass to grow and become a metal-hub in the next five years, saying that people are working hard to make the scene thrive.

“From booking around at other places, it seems like there is something special going on here,” says Chris Eriquezzo, guitarist for Writing In The Skies.

“There’s gonna be good bands to come from any area. But there is something about Massachusetts and New England,” Jones says. “It’s a breeding ground for aggressive music. I don’t see that changing anytime soon.”