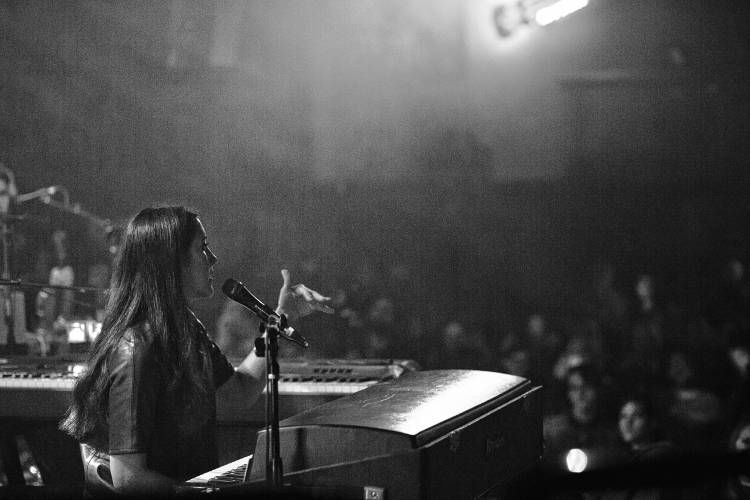 Vanessa Carlton may be best known for playing piano on the back of a truck while singing her hit song “A Thousand Miles,” but that doesn’t mean she’ll play just anywhere. The artist has standards — and they’re apparently higher than at least what one Northampton venue offered.

Carlton was quick to voice what those standards were during her performance last week at the Iron Horse in Northampton, tweeting out her grievances with the establishment’s conditions and, ultimately, suggesting other national acts organize a boycott of venues owned by Iron Horse Entertainment Group — including Pearl Street, the Iron Horse, and Mountain Park.

“Thank you to the audience member who loaned me her fingerless gloves,” Carlton tweeted. “It was freezing on stage at IHEG and they wouldn’t turn the heat up.”

Katie O’Connor of Worcester, the one who loaned her gloves, said in a message that Carlton “kept blowing into her hands” and turned to the crowd for help. O’Connor said she passed up her mitts just before Carlton played the song, “White Houses.”

Carlton also posted a photo of slumping, deteriorating furniture in the venue’s green room, calling it “infamously bad” and “a slap in the artist’s face.”

Carlton called upon fans to tweet at IHEG and pressure them to clean up their act.

“Tweet at iron horse to clean up their dressing room,” she wrote. “We are getting fleas down here.”

This isn’t the first time IHEG conditions whipped up a social media frenzy. In August, hundreds took to social media to complain about what they called dangerously high temperatures during a Baroness show at IHEG’s Pearl Street.

“Thank you guys for sticking it through one of the most intensely hot and demanding Baroness sets ever,” the band wrote on Instagram following the show. “You’re hard as nails for doings so. We hope to see you soon, somewhere colder, and with more available oxygen.”

“Much of what you are reading on social media is false,” Suher said. “The performer was cold on the stage. The venue temp was 70 degrees.”

Some said another big-name act, Kaki King, also had a bad experience at the venue and Carlton reached out to her on Twitter to get the ball rolling with a boycott. “Many of my musician friends and I hope that IHEG does the upgrades they need to so that we may return!” she wrote.

Jim Neill, marketing director for IHEG, said he wished Carlton had taken her complaints to management instead of throwing “gas on the fire.”

“Sometimes it hurts because we’re working really hard,” he said. “We’re doing what we can.”

Carlton said in a message that she reacted strongly because for touring musicians, every venue is like a piece of home.

“Many of us are not from Northampton, but when you tour, every town becomes your town and every venue is where you work,” she said.