Like Guthrie Meets MacGyver: The Suitcase Junket Rocks Out 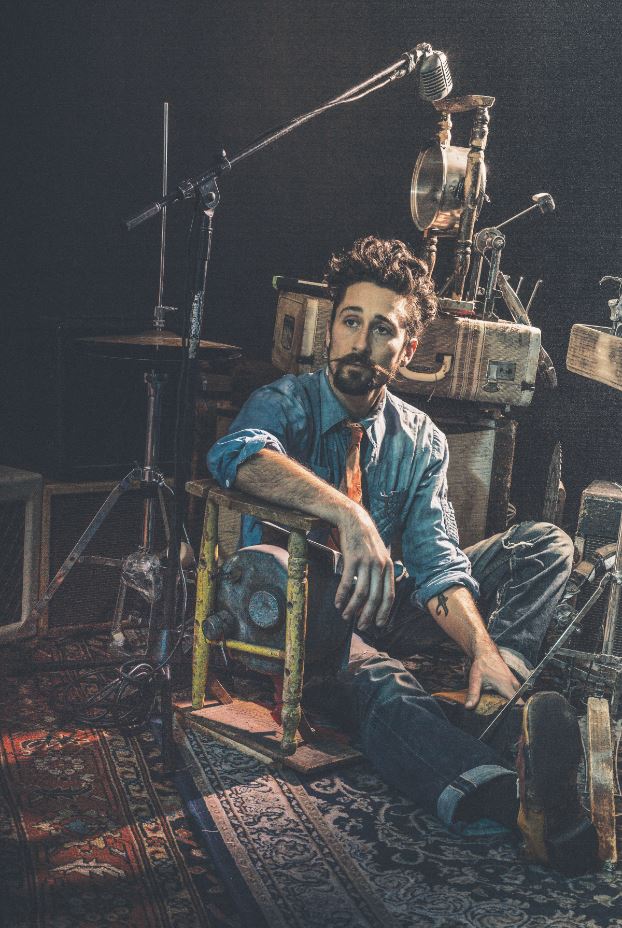 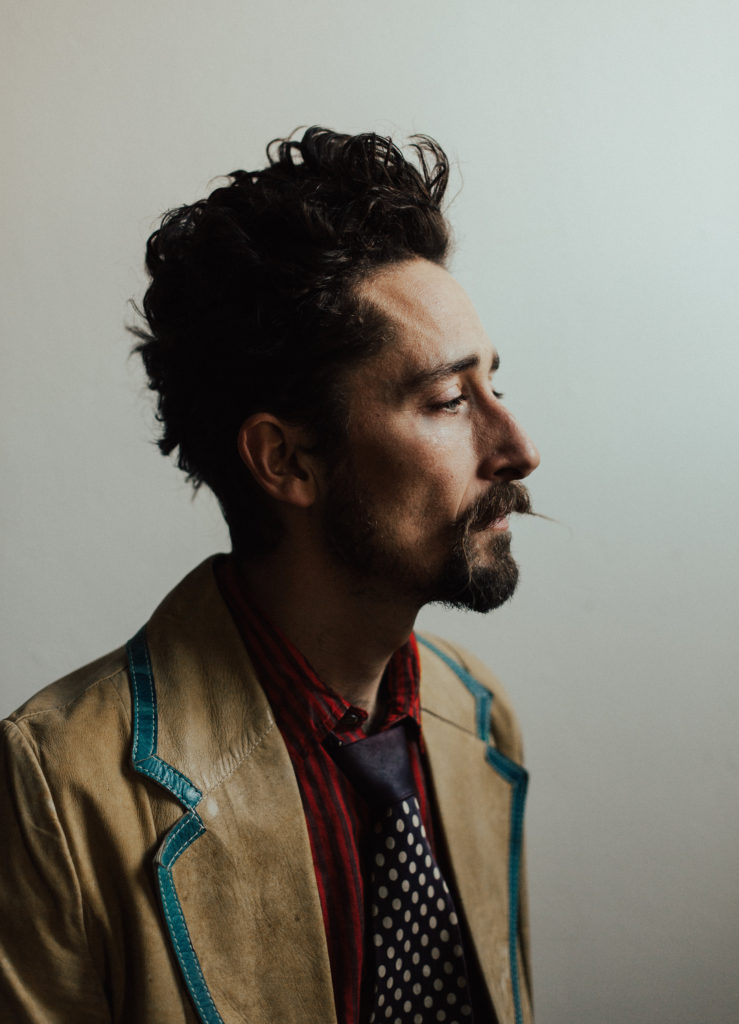 Some of us spend our days sitting at computers in nondescript rooms. In the new, handmade music video for his love song “Beta Star,” Matt Lorenz gives that a shot. He wakes up in the morning, washes his face, twizzles his long mustache into shape, puts on a tie, grabs a coffee, and sits down to type.

In his mind, he’s wearing a tutu and romping around with his dog Scribner. Those fast-cut dance sequences play under growling electric guitar, whistles, and a harmonic, wailing chorus about coming home, reconnecting, and waking up together.

Maybe the video is a cheeky rebuke to white-collar work. Maybe it’s an ode to long weeks on the road during tour season. Probably it’s both. From his childhood in southern Vermont through his young years at Hampshire College in Amherst, Lorenz, 34, has made sense of the world through his restless romance with old-school rock, folk, blues, and Americana.

After college and his time as a member of Rusty Belle — a “roots-rock junk-folk” band that he founded in 2006 with his sister Kate Lorenz — Lorenz broke off as The Suitcase Junket: a frenetic and soulful one-man act. He sees it as “an all-encompassing project that stays open-ended, but the driving question is: How much sound can I make as one person?”

Lorenz, who is signed to Signature Sounds in Northampton, will release his new album Pile Driver on April 21. He plays the Shea Theater in Turners Falls on April 21, the Fresh Grass Festival at MASS MoCA in North Adams Sept. 16-17, and many points all across America in between.

He’s a fun, friendly, hard-working guy. But the magic of Lorenz is in how he plays. As a one-man band, he plays not only by strumming his old, upcycled guitar and stomping on his foot-pedal drum, but by strapping himself to invented instruments like a shoe-dropper — which runs on a pulley system — and his so-called “bag of bones,” which jangles along to the beat.

The setup is Guthrie meets MacGyver, and it allows Lorenz to riff wildly on tradition. His weird, charming act is highly visual as well — you watch his shows as much as listen to them.

Lorenz recently stopped by to tape an episode of Advocate Sessions, our weekly pop-up concert video series. The video of his 20-minute set goes up Friday — click here to see him in action. Here’s a sneak peek:

But before taping, I sat down with him to talk music. The following interview has been edited and condensed.

Hunter: You’ve said that you want The Suitcase Junket to make ‘as much sound as possible.’ What does that mean?

Matt: My goal is to do this without any looping or effects. I’m focused on the human body, starting with the motion of tapping your feet. I attach myself to instruments and add some simple amplification. It’s basically analog, and I add a little as I go. On this new album, I added a little two-and-a-half octave toy Yamaha keyboard from the late ’80s or early ’90s. You can play, like, two notes at a time on it. But if you plug it into an amp it sounds pretty good.

Hunter: What does that run off? Batteries?

Matt: Four AAs, but I use a cord. It seemed not cool to use so many batteries. Plus they run out in the middle of the show.

My main project is to push a one-man-band to get as big as it can, while keeping the analog vision. My aesthetic is old objects — the antique. I hate waste. I don’t like to see perfectly good things thrown away. So, there’s a trash-picker element involved with this.

Hunter: You show such a passion for playing. How young were you when that started?

Matt: My sister and I both took to music at a young age. After piano lessons I picked up violin for a couple of years, then played saxophone, and I started writing songs as a teenager. I studied jazz sax, since you pretty much have to play jazz on a saxophone. Unless you’re Billy Joel, who pretty much ruined the saxophone for a few decades.

Whenever something interested me, I’d want to get my hands on it. As a little kid I’d write stuff on the piano for recitals. But I’d also see a dance show and decide I wanted to be a dancer. I’d see a puppet shows and get really into puppets. I don’t think I’m built to stay super interested in just one thing. But I’ve always liked building things, so right now I’m trying to find ways of tying all these elements together.

Hunter: What did you listen to growing up?

Matt: My parents’ record collection. The Beatles, The Stones, Dylan, The Band, The Who, Hendrix, that whole pile. And then I listened to what those bands were listening to. Early blues, Charlie Patton, Lightnin’ Hopkins, Robert Johnson.

I also got really into field recordings — the old Alan Lomax stuff. Those recordings have so much grit and honesty. You can hear cars go by, and planes fly overhead. I like that rough-edged quality. We’re just sitting in a living room playing a song, and this is part of how we live our lives.

Hunter: What kind of music were you playing by the time you got to Hampshire?

Matt: Mostly improvised music and weird experimental stuff on the saxophone. I kind of burned out on that, although I used some breathy saxophone on a few tracks on the Dying Star album. I mixed it with scratchy violin, so that you can’t really tell that it’s either instrument — they kind of meshed together, like an organ sound.

Hunter: You’ve been touring a lot, but it sounds like you’ve been resting up over the winter.

Matt: My sweetheart and I got a house in Leverett last year. I try to take time off in February and March to sugar in the driveway.

Hunter: Congrats on buying a house — that’s a big step, especially for a musician. No offense.

Matt: I mean, she has a straight job. The bank looked at me and they were like: um, does he have to be on the mortgage? He made $18 last year.

Hunter: Do you work other jobs?

Matt: Only music. It’s been like that for about seven years. This is all an experiment, really. How do I find a way to get paid for the things I love doing?

Then, as it turns out, you’ve traded a shitty job working for other people for a shitty job working for yourself. That was a nice revelation, too — to learn that somewhere in the mix, you are always going to do stuff you don’t like. And that’s important. Even a dream job — like driving around the country playing music for people — includes those times. The job isn’t just playing — it’s writing, and selling, and a lot of driving.

Hunter: Are you a solo act right now because that’s part of the mission? Or, given your interest in incorporating new sounds, will there be a point where you start wishing you had another band member?

Matt: I’m not sure yet, actually. It’s fun having guest musicians onstage, and that’s a great way to start working other people in.

Hunter: For example, your sister sang alongside you at the Academy of Music during December’s First Night celebration.

Matt: I would love to do more of that. Also, I love getting the audience to sing back to me. It feels amazing, and it pulls people in. They start to feel invested in the sound. When you bring music to a room, your job is to spark and spark and spark. If the audience brings enough energy and attention, you can snap and make magic.

Matt: A lot of it is based in blunder. I come across things by accident. I’ve always tried to maintain a few different ways of writing, so that when one is blocked, I can try another.

One way is just to set up my pile of stuff and play — seeing what feels right and improvising. What’s a feeling that I don’t know how to play yet? I work on that and record it. My smartphone probably has 1,500 little snippets on it.

Then I listen to it again, combing through and trying to translate what worked. It’s about mining the raw material, then refining it. I call that ‘search and rescue.’ In the best moments, those little thoughts you pry out will suggest a lot. Walking helps, too. I’ll hum as I walk, record that, then take it home to see where the guitar sits on it.

I still have hair-pulling moments, where it seems a song will never be finished. That’s okay. I try to produce as much as possible, to keep the pipes clear. So that when the good stuff comes along, I‘m ready for it.

Hunter: How about lyric writing?

Matt: Similarly, it’s all about play. You know how they talk about ‘mouthfeel’ in food? I think that term works for lyrics as well. When you’re saying the line, it has to feel good in your mouth. It needs a few good consonants, maybe. The words have to flow. Maybe I need an ‘o’ sound instead of an ‘e’ sound, so what word can I change the word ‘clean’ into? Just an example. It needs to be something that feels good to sing a hundred times.

Hunter: Over time, are you discovering that there are common themes in your storytelling?

Matt: Yeah, I think so. I’m writing a lot about home, about intimate friendships, love and loss. That’s the simplest song there is: you have a thing, and then it’s gone. I try to boil songs down into pretty basic things. You go in there with a bunch of complex thoughts, maybe, but the effort is still to connect with basic emotions.

This new record also has a few songs that are more political and social — like resistance tunes.

Hunter: What else are you exploring on this new album?

Matt: I’m digging deeper into roots music — deep porch songs — so there are a few rocking blues songs full of finger-picking and country-folk feel. Adding that keyboard is a big change for me, especially when I’m doing live shows. And I’m trying to maintain a big push forward into whatever new thing will push me past my limits.

That’s where it’s great to be — doing those things you can’t do, until you can do them. And the learning came from everything that happened as you failed along the way.