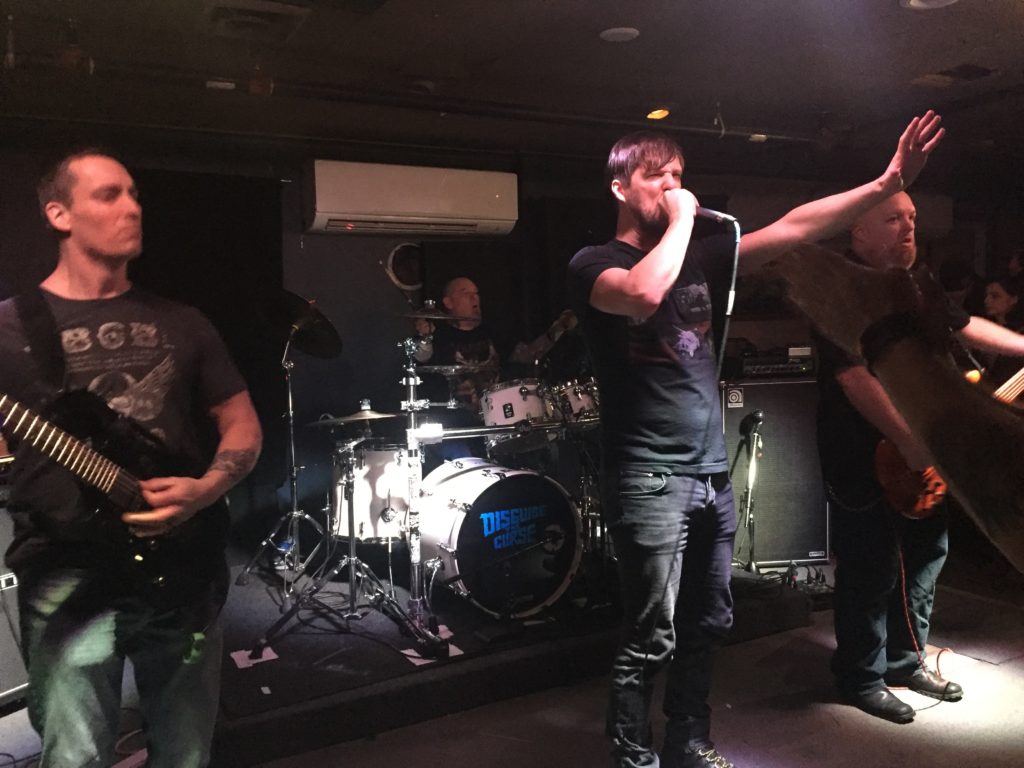 A couple weeks ago I picked up Echoes of the Dying Light by local metal titans, Disguise the Curse. “Holy shit, this is amazing,” I said to myself while drumming on my steering wheel with the music blasting through my car speakers. Produced by Chris Daniele at Yucky Studios, the quality of the album is superb with not one track worth skipping. The album is still in my car stereo on repeat.

The opening track “Caverns” sets the tone for the album: heavy and strongly driven. “Porcelain” is mysterious and dark. In this song, you can hear Michael Merrill’s vocal range. He’ll start with a soft voice that emerges through the music, developing into an eery croon that explodes into heart-felt screams. Closing the album, the band mastered a gnarly cover of Black Sabbath’s “Into the Void.” Oh yeah, do not drive while listening to the instrumental “Hyde,” unless you don’t mind getting lost in the music — that eight-plus-minute song sends your brain on a roller coaster to outer space for a bit … amazing.

With the album still fresh in my ears, I was psyched to get an opportunity to experience it live at the March 18 album release show at 13th Floor Music Lounge in Florence. After some talk online about how Disguise the Curse was slated to open their headlining show, they ended up playing last! The place was packed for DTC — it was a perfect opportunity to boost bands from different genres or lesser-known local acts.

New York-based heavy metal/deathcore band, Assault on the Living, opened the show heavy and loud. New Hampshire’s Unflesh took the stage next, screaming the world into oblivion with electrifying riffs and drum beats. The music scored the room sending us all into foot stomping/head banging unison.

This show for metal music freaks was a temporary safe space free from judgment from the world.

There are a lot of familiar faces in the crowd, a lot of scenesters, the room is filled with love and community — and hugs. There was a lot of that on this night.

The Aberration, from Vermont, played right before DTC. The instrumental metal duo ripped it up and produced more sound than I thought possible by two humans. Watching these guys, you don’t even miss hearing a singer. Metallica medley’s are always a plus as well!

When Disguise the Curse took the stage, vocalist Michael Merrill explained the line up:

“We want to celebrate and we’re with the best of people,” Merrill tells us through his mic. Everyone cheers and they kick off the set with “Lord of the Deep” off their celebrated album.

I slither my way to the front of the stage. I’m bumped numerous times from the back where random mosh pits are exploding. I get a beer spilled on me, but it’s all worth it. Bassist Brian Haggins, with his plucking confidence, and guitarist Joshua Bednarski with his almost non-human guitar slaying, stand guard on either side of the stage. Drummer Jamie Cross holds the metal ship together with his killer drum beats; all while Merrill throws himself around the stage with his hard-felt vocals that pierce everybody there.

They play nine out of the album’s 11 tracks, including “Porcelain” (video on valleyadvocate.com). Full of energy and excitement, they left us wanting more metal. “This was my favorite night … ever,” Cross says to me after the show with a big smile on his face.