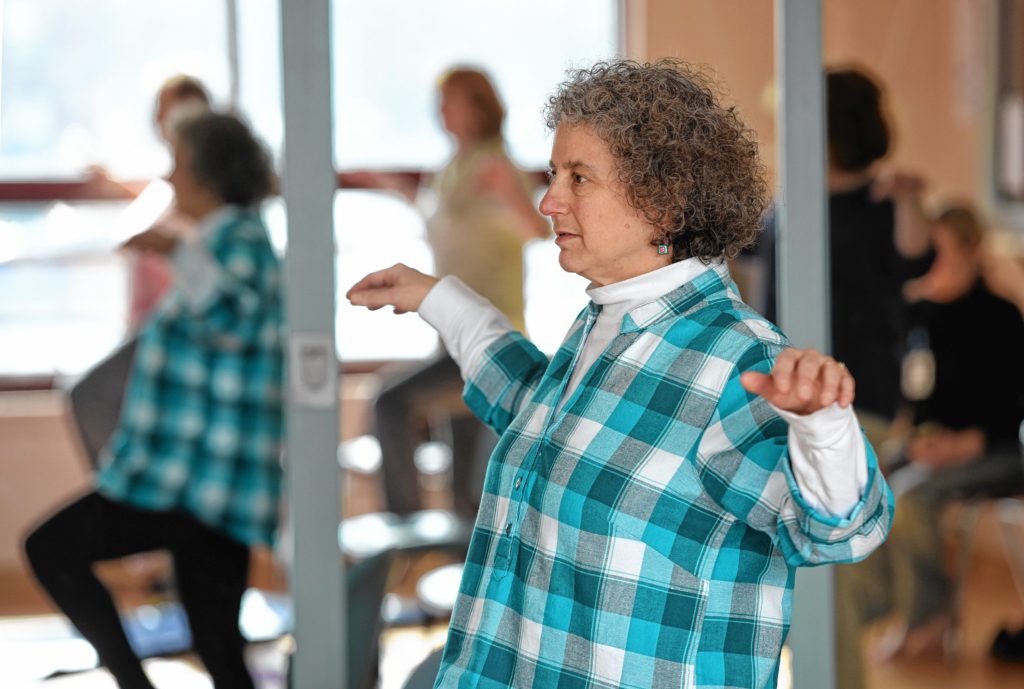 Kim Audette of Sunderland participates in a yoga class for people dealing with cancer at the Greenfield YMCA. February 22, 2017. 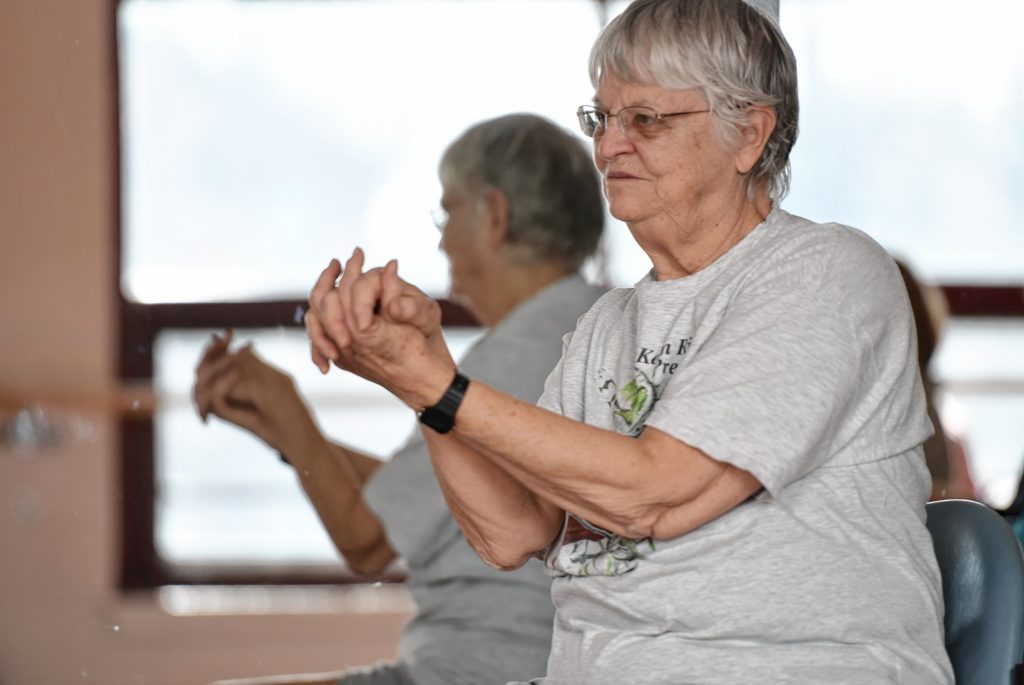 Suzanne Carlson of Greenfield participates in a yoga class for people dealing with cancer at the Greenfield YMCA. February 22, 2017. 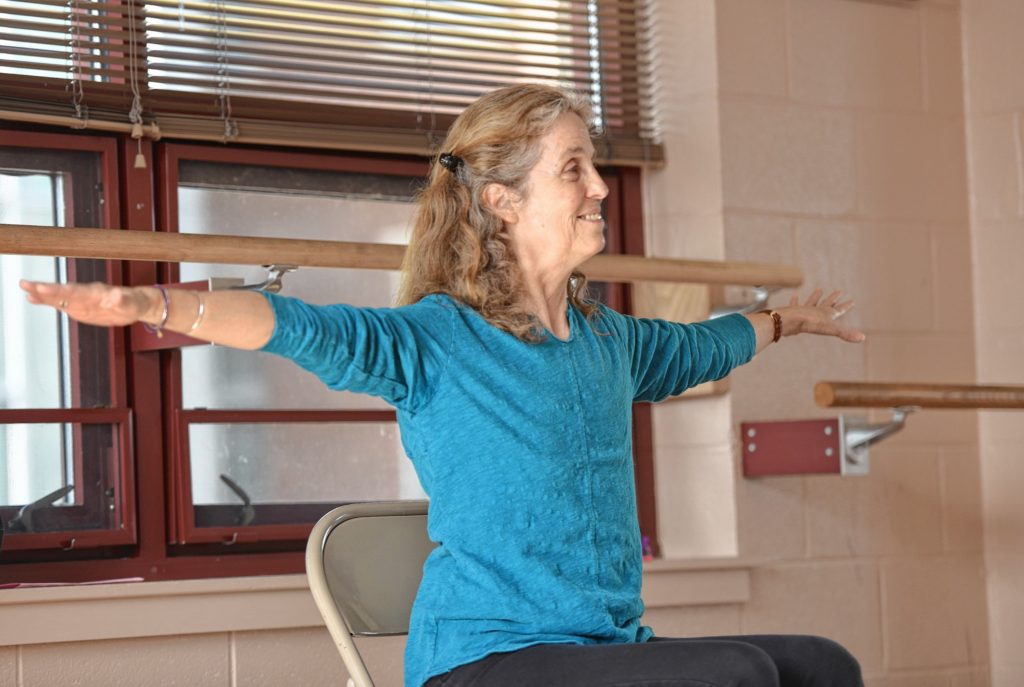 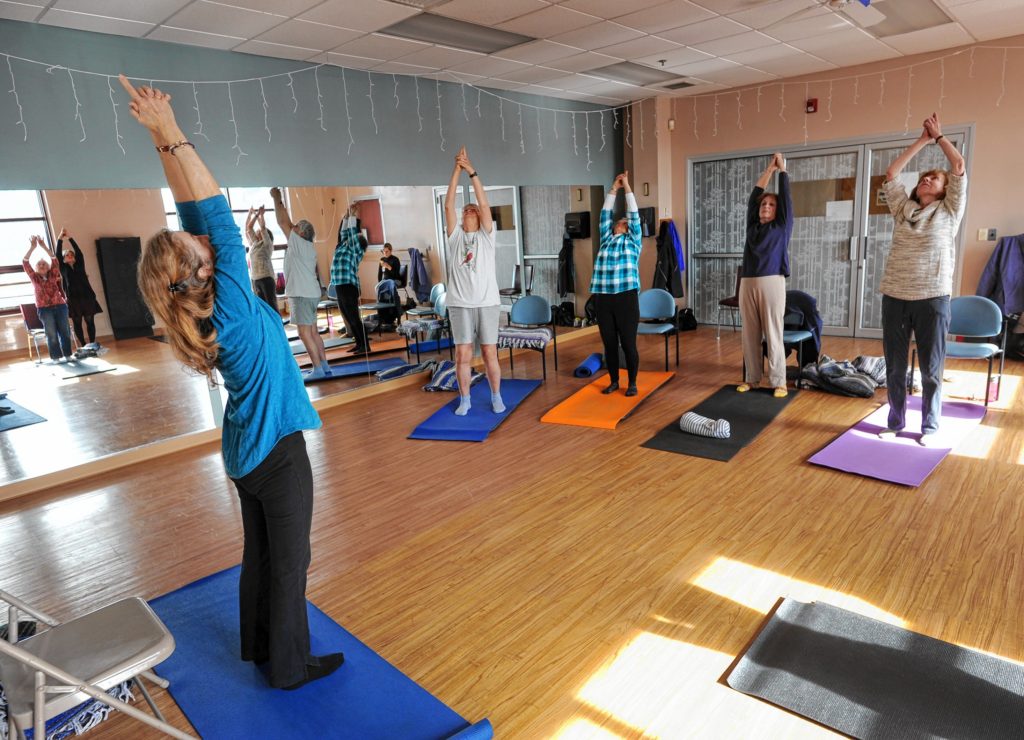 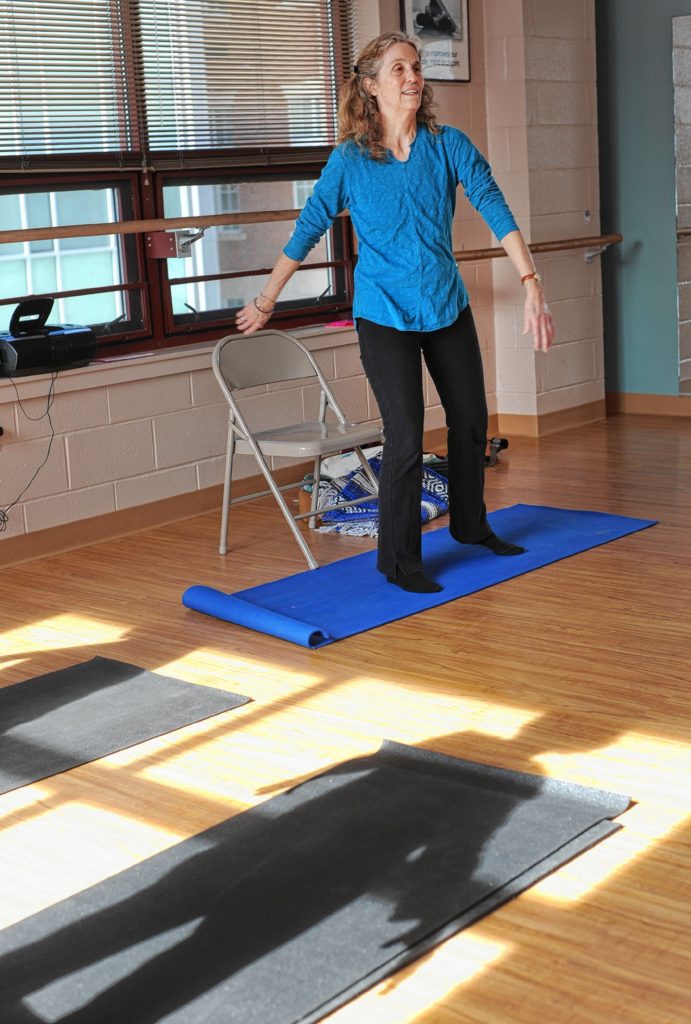 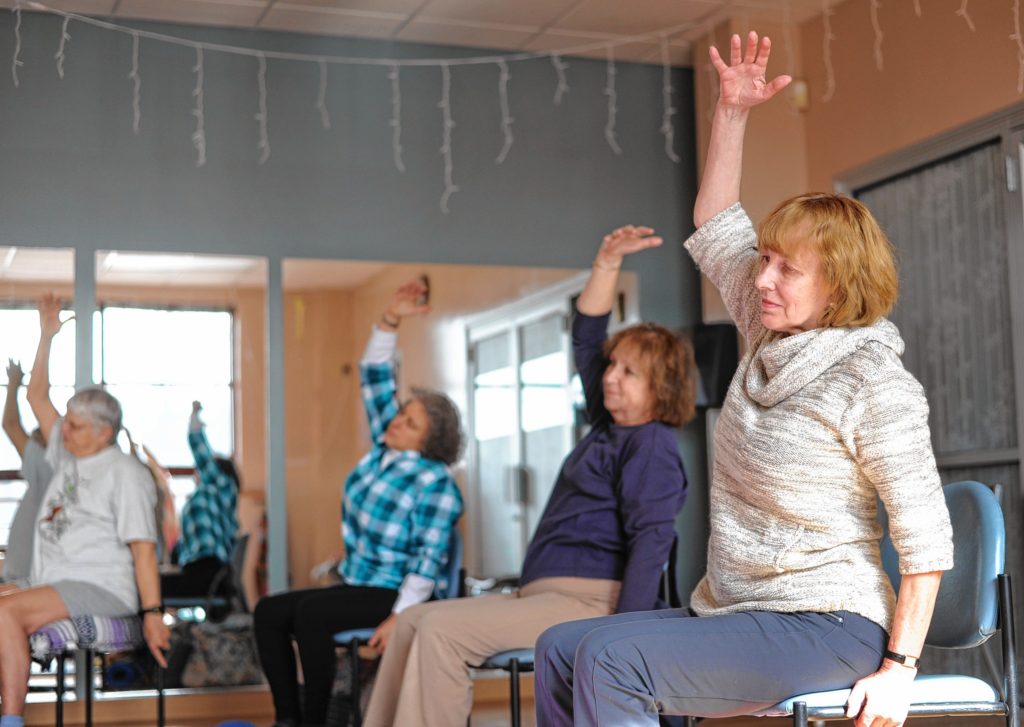 From left, Suzanne Carlson of Greenfield, Kim Audette of Sunderland, Mary Kennedy of Gill and Karen Latka of Montague participate in a yoga class for people dealing with cancer at the Greenfield YMCA. February 22, 2017. 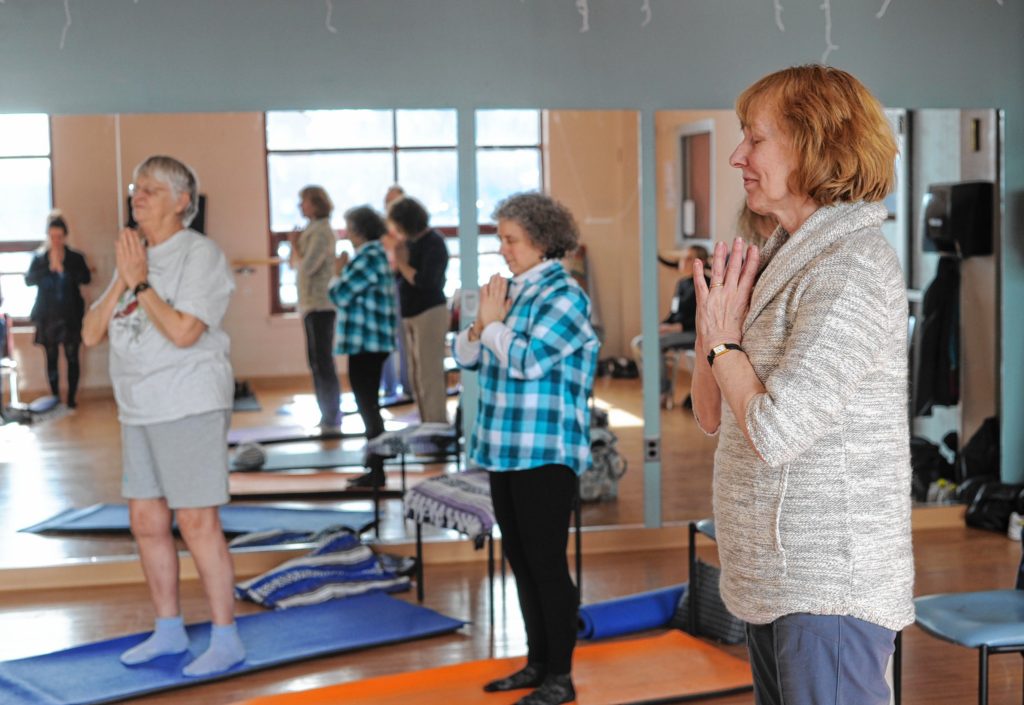 From left, Suzanne Carlson of Greenfield, Kim Audette of Sunderland and Karen Latka of Montague participate in a yoga class for people dealing with cancer at the Greenfield YMCA. February 22, 2017.

Mary Kennedy of Northfield says she could barely move her neck before she began taking yoga with Pam Roberts at the YMCA in Greenfield about six years ago.

Kennedy, a breast cancer survivor living with torticollis, a painfully twisted neck, says yoga has at times saved her, making her “stronger and stronger. Now, I can actually move my head to the right again. I have a quality of life I didn’t have before yoga.”

Cancer is among the most stressful things that can happen to a body — and mind — and so it makes sense that area survivors turn to yoga for a sense of inner calm. That’s what students say they get from a weekly yoga course run by Roberts, a breast cancer survivor herself. The free class, held at the Y on Wednesday afternoons, is funded through the oncology department at Baystate Franklin Medical Center in Greenfield. Part yoga class, part support group, it offers survivors an opportunity to calm anxious minds, soothe stiffened areas and share experiences.

“Because it was so helpful for me, I try to teach from a place of calm,” Roberts says.

She aims to keep the class gentle enough so that students undergoing chemotherapy are still able to get through it, she says. Many of the students have had breast cancer, and so she also focuses on poses that open the chest and stretch the side body, “to get the lymph going.”

On a recent Wednesday, Roberts, wearing lavender-colored glasses, helps her seven students, all women, arrange themselves in a half circle.

Everyone takes a turn updating the others on her own recovery process. When it’s her time to speak, Kennedy says that, for her, the weekly class has blossomed into a life-changing home practice.

“Yoga makes a difference, doing it every day,” she says. “You’ve given me the correct steps from the beginning,” she tells Roberts.

Lynne Culbertson of Greenfield says her ovarian cancer is back and so she’s once again undergoing chemo.

“After a yoga class I feel physically a little revived, mentally a big sigh,” she says.

When everyone has had a chance to talk, Roberts guides the group into some gentle rocking and breathing exercises.

“Notice a little tickle in your nostrils. Follow your breath. You can feel yourself starting to quiet,” she says as the students sit with their eyes closed. “Relax the muscles in your face, neck and shoulders. Let that awareness travel down your legs. Take a moment to be aware of what’s in your hearts and your minds.”

As they do, the hum of the fan dominates the room. Breathe, she says, “like a wave coming in and out.”

Roberts then asks the students to twist in each direction, reminding them to do it carefully. “If you are someone with osteoporosis or metastisis, you always want to be careful with twists. Take a couple breaths, let any lightheadedness you feel fade away.”

Roberts ends each class with about 20 minutes of guided meditation. She calls it key to getting “to that place of stillness inside.

“Observe the last bit of tension leaving the body through the top of the head,” she says as the women lay face up on their mats, cloths covering their eyes to block the light. “Relax.”

This, she tells them, helps detach “from a world of cares. It’s your good energy that makes this class possible.”

Roberts says yoga helped her get through breast cancer treatment in the early 1990s. She structures her classes around breathing techniques that survivors and patients can use in their time of greatest need.

“This is something you can do in the doctor’s office when you’re waiting for test results,” she says of the gentle postures and breath work. “People make space for it as they can.”

One student, Roberts recalls, had high blood pressure when she began taking the classes. Not long after, it dropped off.

“Living with a cancer diagnosis, even if it was years ago, can throw us off balance,” she says.

Kennedy, who has had three major surgeries on her breasts, says she’d never done yoga before she began attending the classes. Now, she calls yoga her own version of strength training. Between cancer and her neck injury, Kennedy says she hasn’t been able to work, and so the fact the class is free is a big deal.

In addition to the physical benefits she has gained, Kennedy says Roberts has helped her feel mentally calmed and spiritually uplifted.

“This is more than just yoga,” she says. “She has touched all of us.”

Karen Latka of Montague says she started taking the class right after finishing radiation about two years ago. She took comfort in being around others who had gone through similar experiences. She says it helped her detach from everything else going on with her treatment.

“It really helped me feel centered and supported,” says Latka.

Culbertson, diagnosed 15 months ago with ovarian cancer, began attending the class in the fall. She’s undergoing a round of chemotherapy and so, she says, it can be difficult to muster the strength to get to class. “It takes all of my energy to get here.” Still, she says, “it’s gentle enough that I feel invigorated after, and calm.”

For Kim Audette of Sunderland, yoga has helped her feel in control of her body again.

“After the chemicals, my body didn’t feel like my body anymore,” she says. “And this has helped me get it back to where I want to be.”

The class runs noon to 1:30 p.m. each Wednesday at the YMCA in Greenfield, 451 Main St. Though the class is free, students should register with Roberts. Contact her at 625-2402, or at pamro@aol.com.