Cinemadope: Your Nearest Screening of 1984 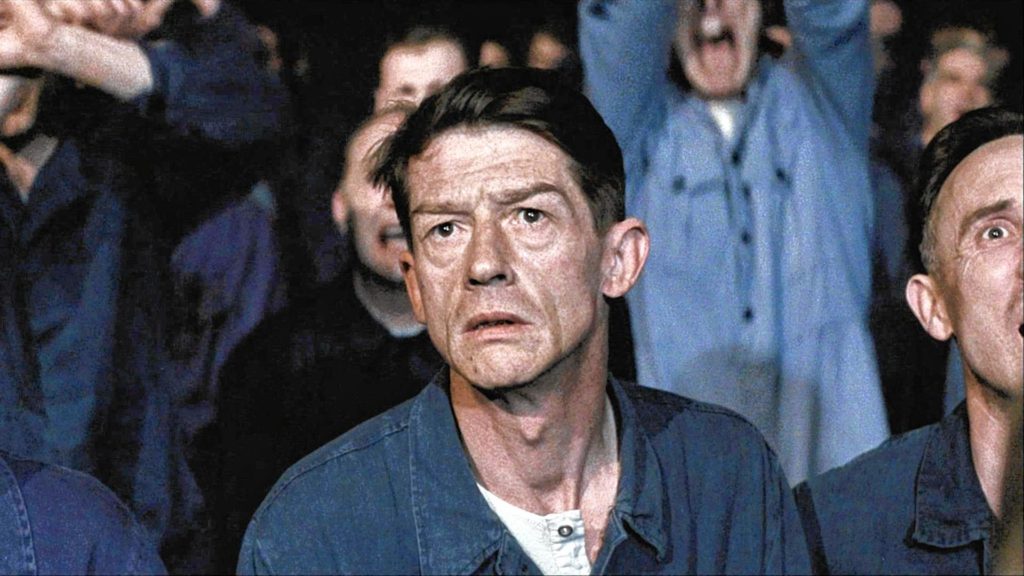 A few weeks back I found myself with a rare night off — the kids asleep early, the house somehow clean, the bills already paid. I was scrolling through my various Netflix queues when a familiar title popped up: V for Vendetta, the Wachowskis’ 2005 adaptation of Alan Moore’s (Watchmen) famous graphic novel. Something in our current climate had me in the mood to revisit this tale of a neo-fascist regime, holding on to power through alternative facts and violent suppression.

It’s a flawed film, sometimes a little too in love with its own candy coating, but ultimately still affecting. In the decade or so since I’d seen it, I had forgotten about the strength of John Hurt’s performance as Adam Sutler, the High Chancellor of the far-right party in power (he also, in a brilliant bit, plays another actor who is imitating Sutler on a satirical television show). A spitting snake seen mostly on enormous viewscreens, his Sutler is Big Brother given form.

But V wasn’t Hurt’s first time in a dystopian world. He was also Winston Smith, the protagonist of George Orwell’s 1984, in a film adaptation by Michael Radford (Il Postino). That film, in which Hurt’s character is at the other end of the spectrum from Sutler, is having a sudden renaissance: this week, as part of a nationwide cinema movement, over 160 cinemas across the country will screen Radford’s film as a form of protest against the planned cuts to the National Endowment for the Arts — cuts that many of the participants decry as an attack on free speech and creative expression that may not fall in line with the governing powers.

The screenings are set for Tuesday, April 4 — the day on which Orwell’s Smith, a bureaucrat who is tasked with rewriting the history books to cast the government in better light, begins keeping a forbidden diary. “Down with Big Brother,” he writes, a simple form of defiance that could cost him everything if discovered. Then he commits a crime still worse: he falls in love with co-worker Julia (Suzanna Hamilton), and begins a feverish existence filled with (outlawed) recreational sex and contraband foods, knowing all too well that nobody is truly beyond Big Brother’s reach. Time will never be on their side, so what they have of it is burned at full heat.

Locally, screenings are being held at Northampton’s Academy of Music, South Hadley’s Tower Theaters, Pittsfield’s Beacon Cinema, and Hartford’s Real Art Ways. (Times vary; check unitedstateofcinema.com for more information about individual shows.) Many of the shows are being offered for free, with a $5 suggested donation, and many theaters are donating the box office take to a variety of charitable causes. We may not be at the point of Thought Police, but 1984 and V for Vendetta give us two chances to see Hurt showing us what yet may come.

Also this week: the Pioneer Valley Jewish Film Festival continues with Friday and Saturday screenings of Young Frankenstein put on by Pothole Pictures in Shelburne Falls. Quite possibly the most fully realized of Mel Brooks’ films, this sendup of old Frankenstein pictures teams Gene Wilder, as the titular scientist, with a pitch perfect cast that includes a pop-eyed Marty Feldman, both Teri Garr and Madeline Kahn, and Peter Boyle (Everybody Loves Raymond) as the Monster.

Another old classic gets a screening when Amherst Cinema brings in Foxy Brown for a Friday night show. Starring Pam Grier (who two decades later would star in Quentin Tarantino’s Foxy-influenced Jackie Brown) in the title role, the film follows her on her hunt for revenge against the men — including her own brother — who killed her cop boyfriend.