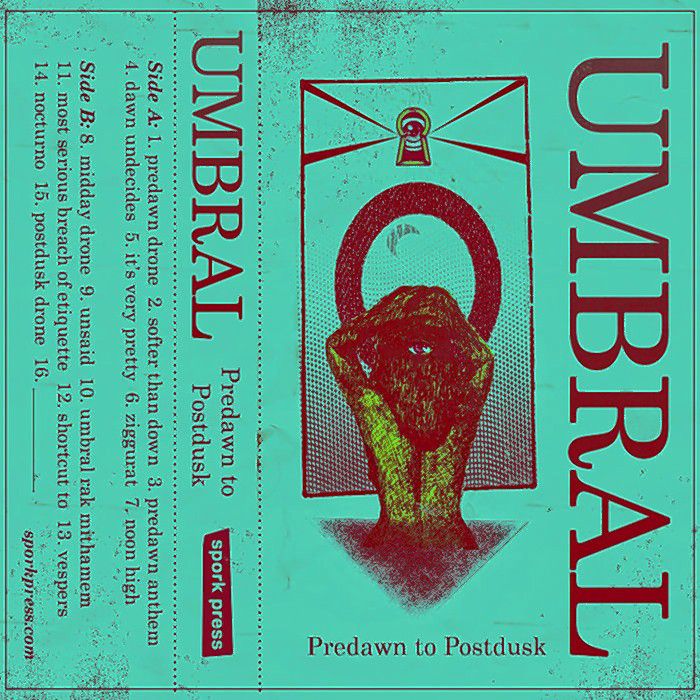 How a fictional psychdrone collective from Berlin took form in Greenfield

In 2015, a real writer and real College of the Atlantic professor named Daniel Mahoney published a real book called Sunblind Almost Motorcrash. In it, he wrote fictional reviews of imaginary bands. The purpose of the project, he said, was to “investigate the distance between sound and how we use language to describe sound,” which is the crux of this racket we call “music criticism.”

One of the reviews was of an “informal underground psychdrone collective in Berlin” called Umbral. Here’s an excerpt from Mahoney’s fictional review of Umbral’s fictional Predawn Demo Tapes.

A friend once gave me a homemade cd-r wrapped in brown paper and packaging tape. It was well worn with faint drawings of squid and astral charts, an old email address, a recipe for porridge. She said it was by Umbral before they became huge. Said she had seen them as an informal underground psychdrone collective in Berlin. Said now she could never move from Berlin. Said she even stopped trying. I gave it a listen while walking New York at night. It was like walking a half erased creation where streets were streets only by walking them and what was never walked on, never was to be. I made it out but two hours of me walks there still.

Once Mahoney found out his book would be published, he sent the reviews around to bands he liked and asked them to become the bands he wrote about, and to record music for a tape to be released with the book. Greenfield musician and poet Daniel Hales (The frost heaves and hales.) became Umbral, and after having so much fun recording for the initial tape, he decided to make a follow up called Predawn to Postdusk with JD Hairston from the band Rebel Base.

This new collection self-describes as “basemental psychdrone collage rock” and seeks to polish up the original Predawn Demo. The 55-minute psychdrone, divided into 16 tracks, feels like one barrelling piece reconciling the distance between atmospheric and headboppery. Through mostly textural swells and drones, there is a pop song or two buried somewhere in the hours of Predawn to Postdusk. One called “Unsaid” is hard to shake with its anthemic chorus: “When the words you said meet the words you meant to say/ rest assured there’s always more that’s better left unsaid.”

Whatever the short distance between fictional and real, predawn and postdusk, atmosphere and headbob, or the said and unsaid, this new collection is a journey through it.

And don’t miss the release show: a psychedelic multimedia spectacle combining live music, site-specific drone installations, projections, shadow puppets, and more. It’s April 1 at 7 p.m. on two floors of the Pushkin Building at the corner of Federal and Main streets in Greenfield.