Is this World War III? Not yet 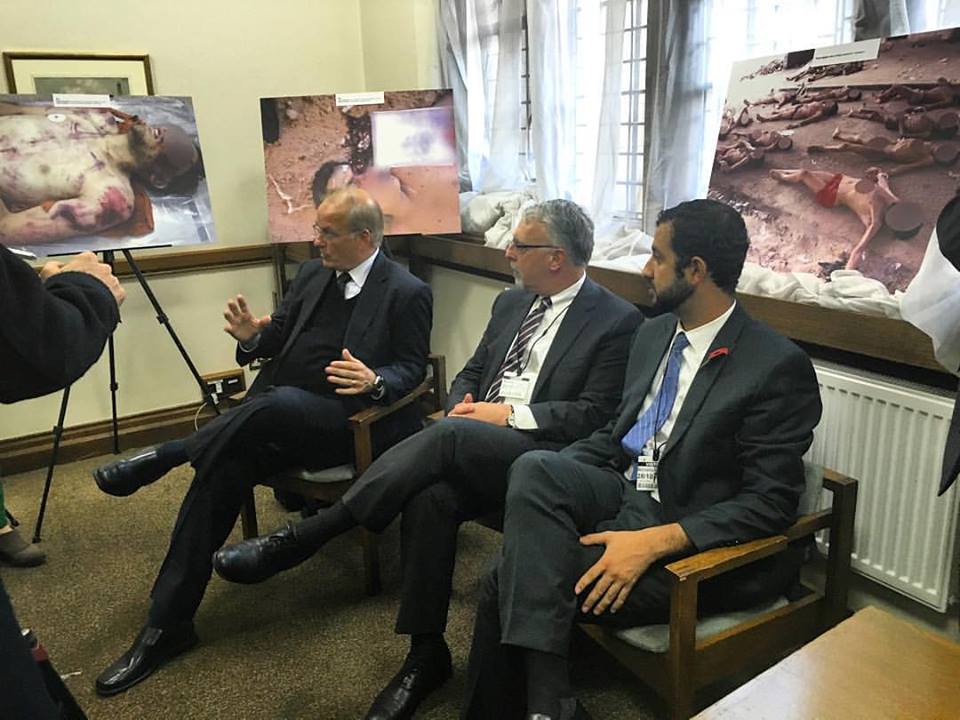 Steven Heydemann, center, professor of Middle East studies at Smith College, speaks after presenting to the British Houses of Parliament in 2015 on the atrocities in Syria. Photo courtesy Steven Heydemann

A chemical weapons attack in Syria, a missile strike from the United States and worsening relations with Russia have made this month a serious pivot point in the protracted Syrian conflict.

Is this the moment future historians will identify as the start to a new Cold War with Russia, the beginning of a larger U.S. intervention in Syria or even World War III? (Will there be any future historians at that point?)

A short recap of what has happened so far:

We are still several steps away from such a catastrophic war, according to Steven Heydemann, a Middle East studies professor at Smith College and senior fellow at the Brookings Institution. Heydemann, who spent eight years in leadership positions at the D.C.-based Institute of Peace, said several things would have to happen to get the country to that point.

But bellicose words and behavior from both the United States and Russia have left Heydemann along with most other foreign policy experts, Middle East scholars and students of U.S.-Russian relations scratching their heads.

Most perplexing to Heydemann is the change in both tone and policy from President Donald Trump. He is suspicious that Trump’s newfound approval on Syria from skeptical Republicans may be overshadowing legitimate investigations of his administration’s ties to Russia.

“I don’t know how to characterize it,” he said. “It was entirely unexpected and a dramatic departure from everything we had come to expect would define Trump’s policy in Syria.” 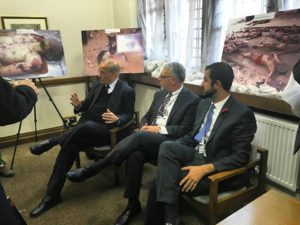 Steven Heydemann, center, professor of Middle East studies at Smith College, speaks after presenting to the British Houses of Parliament in 2015 on the atrocities in Syria. Photo courtesy Steven Heydemann

A week before the missile strike, White House Press Secretary Sean Spicer told reporters the country would have to accept the inevitability that Syrian President Bashar al-Assad would remain in power. Nikki Haley, Trump’s appointed ambassador to the United Nations, had said Assad’s removal from power was no longer realistic.

And then there were all the admiring words Trump had for Russian President Vladimir Putin, saying he had done a “good job outsmarting our country” and accepting praise from him while calling him “highly respected.”

Those words and revelations of an increasing number of financial ties and private meetings between Trump administration officials and the Russians had Republicans on edge and Democrats scrambling for investigations.

All that has changed.

Secretary of State Tillerson, initially criticized for being too buddy-buddy with Russia, has said Russia was either incompetent or complicit with regard to its role in enforcing the 2013 agreement forcing Syria to get rid of all of its chemical weapons.

That language — used by the nation’s top diplomat — was decidedly undiplomatic, according to University of Massachusetts Amherst history professor Audrey Altstadt.

“This inexperienced administration doesn’t seem to be thinking through the repercussions,” she said.

An expert on the Caucasian region, particularly Azerbaijan, a country that borders both Iran and Russia, Altstadt knows the power of a good map. As she discusses the Syrian conflict, she points out that the Crimea region, which Russia annexed in 2014, is only about as far from Damascus as Amherst is from Chicago.

“We’re not talking about a place that is a continent away,” she said. “That really matters.”

Russia’s relationship with Syria is linked to its relations with all the countries in the region, particularly Iran. Altstadt believes Russia has ambitions to reassert itself in the Middle East, something that hasn’t been true since the Soviet period.

What to watch for in the news

And yet, the theatrics of whether or not Putin would meet with Tillerson were more a sideshow, she said. The real thing to watch for would be further attacks, either further chemical attacks by Assad or an actual conflict between Russian and American forces.

Could that happen? Without the agreement between Russia and the U.S. to coordinate air operations against the Islamic State in Syria — a group all consider an enemy — there is a higher risk of an accidental collision or engagement.

Heydemann said the Trump administration has committed to responding militarily in the case of another chemical weapon attack out of Syria, but that it does not want to start a war.

“Right now the signals out of the White House indicate a strong intent to prevent escalation,” he said. “The question is whether Russia and Iran are similarly committed.”

Heydemann sees hints in Putin’s meeting with Tillerson that Russia wants to avoid a larger war, too.

As to Syria being the jumping-off point to World War III, complete with the threat of nuclear annihilation, Heydemann is skeptical. Syria is just not important enough to either country, he said.

Russia is also under global pressure to distance itself from the Assad regime now that the chemical attack has taken place.

For Brian Ogilvie, chair of the UMass history department, it is difficult to use history as a guide in the present situation.

“I’m just right now watching what is going on with increasing horror and disgust and not seeing any good exit,” he said.

During his period of study, between 300 and 400 years ago, wars ended because one or both sides ran out of money and then they reached an uneasy peace. But with Russia and the United States willing to put seemingly unlimited resources toward conflict, it is hard to see that coming to a stalemate, he said.

Though the threat of a nuclear war is small, Ogilvie pointed out that even the presence of nuclear weapons has the effect of reducing the level of communication between the administration and the people.

Citing the work of his colleague, Christian Appy, Ogilvie said the president’s unchecked power to launch nuclear missiles has led presidents to fight frequent and costly proxy wars to prove they are tough enough to fight a real nuclear war.

A bleak outlook for the near future

But while World War III seems to still be a remote possibility, Altstadt was hard pressed to find anything positive in the current geopolitical climate.

Asked why, she pointed to what she considers the most important map in her office: the Freedom House “Freedom of the World” map. On it, all the countries of the world are colored green for “Free,” yellow for “Partly Free” and purple for “Not Free.”

The map is filling up with purple.

“The dictators are winning and the sentiment that supports them is on the rise,” she said.

At the same time the situation in Syria deteriorates, Turkish leaders are cracking down against political opponents. Hard right leaders are gaining support across Europe in countries like France, Germany, Poland and Hungary. And the United States has not been immune.

“The shift to the right in the US as demonstrated in this last election was accompanied by an inclination toward less tolerance and more of a resort to violence,” Altstadt said.

Freedom House uses rigorous rubrics like holding free elections, having an independent judiciary, freedom of the press and the level of corruption. Over the past 10 years, 105 countries have seen a decline in their freedom scores while only 61 have seen improvement, according to its website.

This past year saw the sharpest decline in freedom in that time.