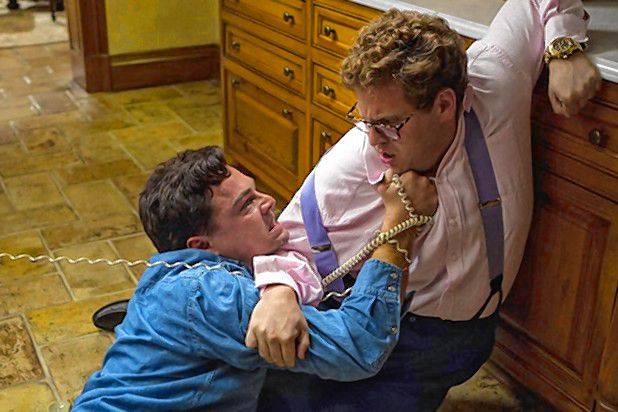 This week, our resident Stream Queen Lena Wilson offers a journey into some high-minded flicks beyond old Cheech and Chong movies (see pg. 18). But Advocate staff thought it equally important to share a blacklist of movies and TV shows to avoid when high — at all costs.

This list was compiled from writers’ personal experience… but that’s probably obvious.

Eraserhead (dir. David Lynch, 1977) Watching Lynch work his doomy industrial magic is brain-warping enough when you’re sober… to pop a horrifying movie like this into the VCR during high times ruins lives. — Hunter

The Wolf of Wall Street (dir. Martin Scorsese, 2013) Watching the cocaine-fueled, money-loving hedonism and the “let’s throw cash at this shit” attitude that personifies life in this film is absolutely disgusting, but admittedly thrilling. It’s like watching a gory car crash in slow motion set to an upbeat earworm 1980s pop song. However, the icing on the cake is watching a drugged out Leonardo DiCaprio gruellingly crawl to his car and get behind the wheel. That should be a PSA on the realities of drug abuse. — Chris

Cannibal Holocaust (dir. Ruggero Deodato, 1980) Older films that have gore make me uncomfortable. In retrospect, it is probably because I saw Nightmare on Elm St. at too young an age – I avoided spaghetti and other foods that remotely resemble intestines for at least a month. Cannibal Holocaust has gore so intense that viewers at the time thought the death was real, and the director had to fight obscenity charges. The film follows a group of documentarians that go to the Amazon to document cannibal tribes. Unsurprisingly, things go wrong. – Chance

Requiem for a Dream (dir. Darren Aronofsky, 2000) This probably goes without saying (although it didn’t for me), but if you’re trying to chill out for a few hours, don’t reach for the most high-octane psychological drama about drug abuse ever made. I was in college and didn’t know any better. I do now. — Hunter

The Texas Chainsaw Massacre (dir. Tobe Hooper, 1974) You’ve got human skin furniture, people hanging from meat hooks, and a family of redneck Texas cannibals sitting at a dinner table with a traumatized female victim screaming for what seems like minutes while the all male group of psychopaths laugh their asses off and howl like a pack of hyenas. Not so mellow. — Chris

Naked Lunch (dir. David Cronenberg, 1991) If you ever wanted to see someone turn into a fly-typewriter while getting fucked, then yeah, this is a great movie. Otherwise, skip the visual nightmare fuel and just read the book of the same name by super beatnick William S. Burroughs. The movie is a freaky retelling of bits of the story blended with a fictitious look at how the book came together during one hell of a drug binge for Burroughs. The movie is about a guy who accidentally kills his wife with the same poison he uses to kill insects. Then he joins up with some huge bugs running a secret government plot to … who-cares-what. Just thinking about this movie makes my brains want to bore a tunnel out of my skull. (The book, however, is nothing like this. It’s a bunch of essays that can be read in any which order that chronicle Burroughs’ love of doing drugs and jet-setting.) — Kristin

Breaking Bad (AMC, 2008-2013) Even on a good day, I’ll break into a suspenseful sweat if the tragic misadventures of a genius meth dealer are playing out on a television within a quarter-mile of where I’m standing. It’s a great show, but it is NOT chill. I developed my Walter White-y spidey sense for good reason — I don’t need that kind of drama twice. — Hunter

Snow on Tha Bluff (dir. Damon Russell, 2011) The film follows Curtis Snow’s everyday life, a small-time drug dealer in one of the most dangerous neighborhoods in Atlanta. The violence, death, and pain is all too real in this hyper-realistic documentary. – Chance

Blue Velvet (dir. David Lynch, 1986) A severed ear in an abandoned lot? Check. A homicidal sociopath in love with sentimental 1950s ballads who is also an abusive sadomasochistic gas huffer that calls himself “Daddy” and “Baby” during sex? Well… damn. That’s David Lynch in a nutshell for those who watch his creative works sober. I can’t imagine anyone watching this film in any sort of intoxicated state. — Chris

The Fly (dir. David Cronenberg, 1986) Body horror is at the top of the list for things to not watch while you are high. Bugs are second to that. The fly incorporates both in a magnificently and horribly paranoia-fueling way. Actually, maybe you should watch it. After all: the only thing to fear is fear itself. — Chance

Charlie and the Chocolate Factory (The re-make) (dir. Tim Burton, 2005) This is just the shittiest. — Hunter