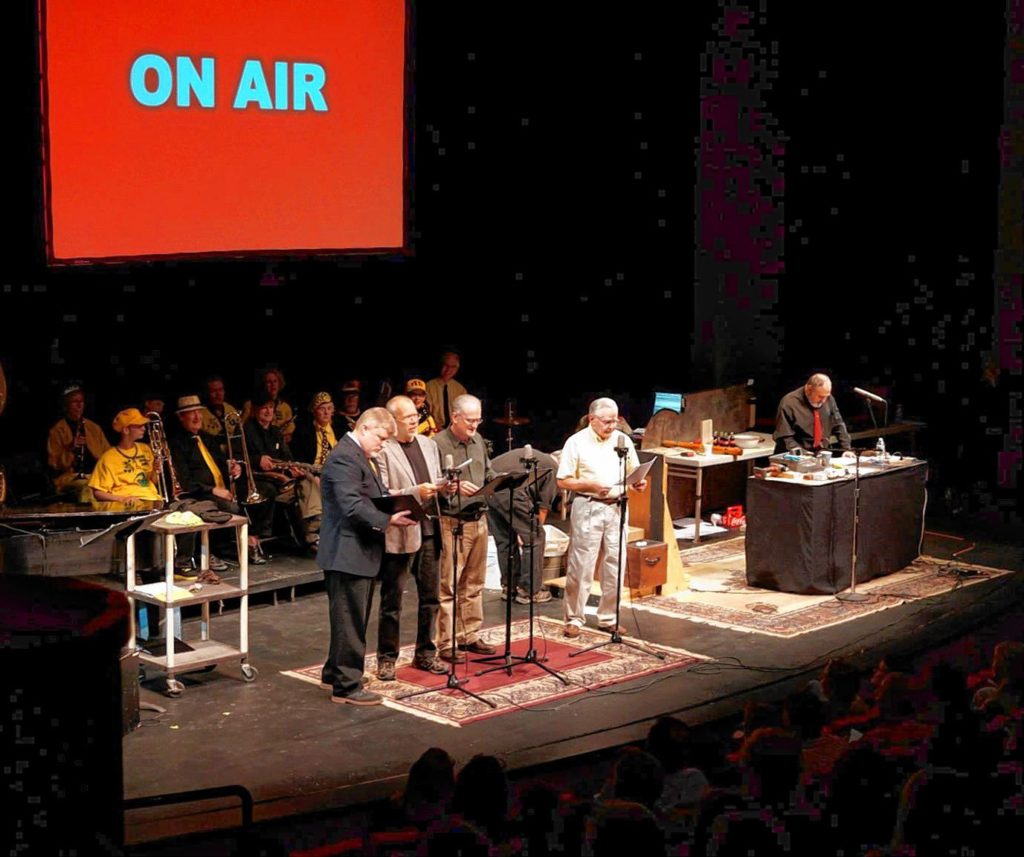 Back in the day — way, way back — live radio drama was a staple of the airwaves. As script-toting actors gathered around microphones, their dialogue was peppered with live sound effects, backed by a live band and punctuated with live commercial breaks, often with a live studio audience looking on.

Lately, New Century Theatre, in partnership with radio station WHMP, has joined in the genre’s recent rebirth as a staged theatrical event. Life in the (413) is an evening of satirical sketches “acted, written, and directed by locals, skewering our local cultural stereotypes,” as Bill Dwight describes it. The fifth annual outing, hosted as ever by WHMP/The River’s Monte Belmonte, hits the stage of the Academy of Music this Saturday. Dwight, who is president of the Northampton City Council, is a veteran of the show. He has performed in it every year since the first one, when he played himself in a piece that also featured State Sen. Stanley Rosenberg (D-Amherst), who makes a return appearance this year.

This weekend’s edition expands into an old-time variety show. It includes musical interludes by the Expandable Brass Band, Kalliope Jones, Josh Sitron, Winterpills, and The Wise Guys, the a cappella singing group led by the evening’s music director, Jeff Olmsted. And this time, the five 10-minute radio plays are clustered around a theme, “The New Normal,” from which Olmsted has composed a comic title song for the show.

One of the sketches is by Phil O’Donoghue, who is credited with the brainstorm that gave birth to the event. “An Afternoon at McDonald’s” takes place at what you may think of as the antithesis of the “typical” Valley eatery, but here it becomes the venue for a tasty sampling of the local “cultural stereotypes” the show lovingly needles.

The cast of characters includes a middle-aged, Bernie-supporting Hampshire alumnus; a “frazzled mom” who has just given up the struggle to be earth-conscious and vegan; an unapologetically fat-loving lesbian; and three teenagers with decidedly different takes on Valley culture, one of whom is on the verge of coming out — but not in the way you’d think. The radio format also makes it possible to set a play at a fast-food drive-through window, created entirely by sound effects.

In addition to its distinctive format, what’s truly special about Life in the (413) is that “it brings together over 50 local performers who come from differing artistic backgrounds — professional and community theater, improv, radio, classical music, rock, pop, jazz, a cappella singing, Foley sound-effects artists, playwrights, directors, and more,” says Lisa Abend. A veteran of many New Century productions and two previous (413)’s, she is this year’s artistic coordinator. Abend credits the show’s enduring popularity to “the abundance of goodwill and generosity of all the participants.”

The radio format, with actors holding scripts, makes it possible to put the whole thing together in a single day, according to New Century’s Sam Rush. The concept is also central to WHMP’s role in the event, as the performance is recorded live for rebroadcast. “What makes this year’s version unique,” he says, “is the unique times we all find ourselves in.”

Most of the short radio plays that form the show’s backbone reflect the now-not- so-new “normal” that defines Valley life for most of us. Take Meryl Cohn’s “Don’t Forget to Breathe,” which features a happily married wife-and-wife couple whose domesticity is upset by the reappearance of an old girlfriend who’s more alternative than either of them.

“Unfriended,” by New Century co-founder Jack Neary, revolves around four women who gather virtually for “an iPhone intervention” when one of them experiences a crisis of (gasp!) politics.

In Harley Erdman’s farcical “Emotional Support,” that aid is provided by a service dog who is vital to his owner’s equilibrium, but unsettling for a nervous visitor, whereupon slapstick ensues.

“The fun,” says the playwright, “lies in getting the physical comedy across with sound.”

The evening’s climax comes with “Jody Through the Google Glass,” by Kelsey Flynn and Hilary Price, in which Northampton Police Chief Jody Kasper discovers, with spirit guide Clare Higgins, a third dimension beyond Hamp and Noho. (Full disclosure: I’m playing several small parts in this one, including Mayor Narkewicz.)

A couple of years ago, Bill Dwight wrote one of the (413) scripts, “where I predicted the election of Hillary Clinton as president. This year’s edition,” he says, “with its built-in theme of angst over the election that I predicted so well, will be an opportunity for the community to come together and share a primal scream and some curative laughter.”

Chris Rohmann is at StageStruck@crocker.com and  valleyadvocate.com/author/chris-rohmann