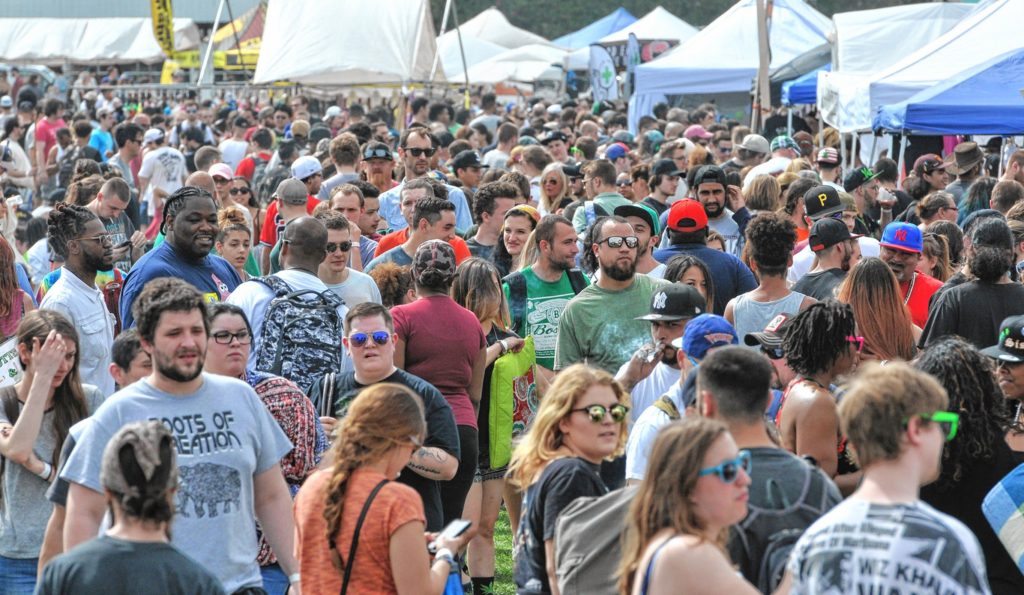 The crowd browses a ring of vendor and exhibitor booths along the perimeter of the 26th annual Extravaganja, held for the second year at the Three County Fairgrounds in Northampton on Saturday, April 29, 2017.

At one point gathering in crowds and smoking weed was a radical thing. Extravaganja participants would congregate in groups to sit and watch bands play in the unforgiving sun, dust kicked up by the constant flow of excited stoners ready to revel in their forbidden fruit.

With political winds bringing recreational marijuana to Massachusetts, the festival has transitioned from a party day to a business opportunity.

Four years ago, Extravaganja was spread across the Amherst Commons, food vendors and cops included. While the grounds were crowded, the Amherst location felt much more relaxed with it’s lack of borders and small town feel. Reggae/funk bands dominated the stages and people casually soaked in the sounds while smoking copious amounts of weed. Restaurants and bars, which usually were set up for college crowds, housed the festival goers — people much more likely to buy snacks than alcoholic drinks.

Fast forward to 2017, Extravaganja is held in the Three County Fairgrounds in Northampton. Fences run the perimeter. Employees are standing at every access point making sure people do not sneak in. Wristbands are handed out.

What topped out at 6,000 on the Amherst Common more than doubled to over 15,000 roaming heads in Northampton.

Walking into the fairgrounds you saw the same colorfully dressed crowds of smokers but they were fenced into a large circle. Ambulances would sound off every now and then, and it seemed like the longest lines were for food and water.

Guys walked around offering edibles from a suitcase, typically $5 to $10 a pop. Owners of smoke shops were handing out coupons, meeting and shaking hands with potential customers. Some tents were not even focused on weed, they might be selling organic syrup or honey.

Despite a new rule prohibiting anyone under 18 from entering, it’s still a young crowd of people swarming onto the grounds buying everything from shirts to bongs.

Marijuana, since being accepted as a recreational product in Massachusetts, has shifted from a party taboo to an industrious thirst. Products ranging from weed-infused soaps to hemp-produced clothing to glass pipes saw high profits. Weed is no longer just for the “bad kids” or college crowd, but for the entrepreneur and investor as well.

Chance Viles can be reached at cviles@umass.edu.