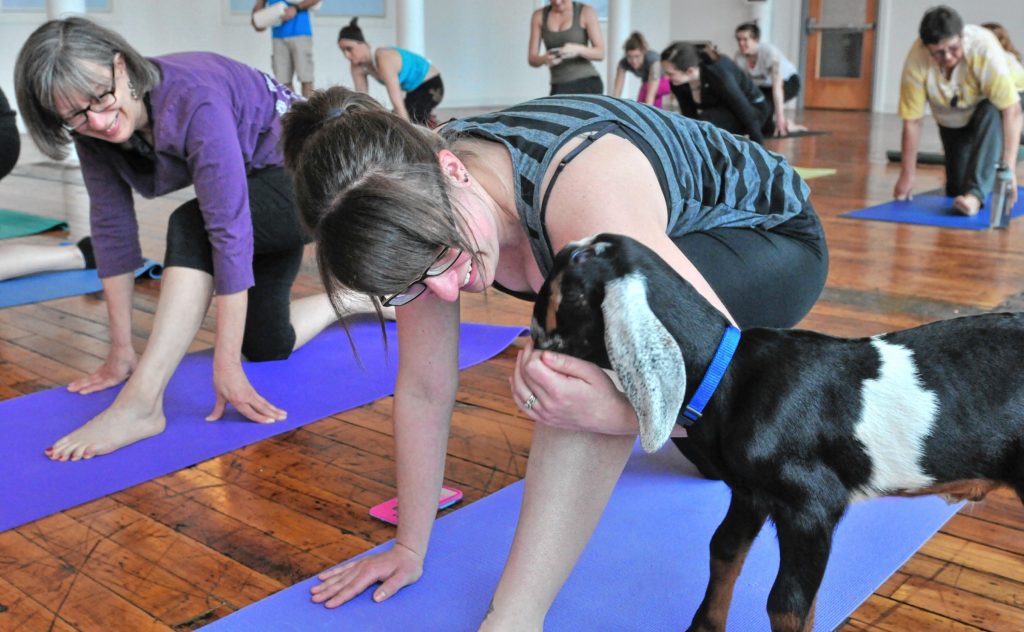 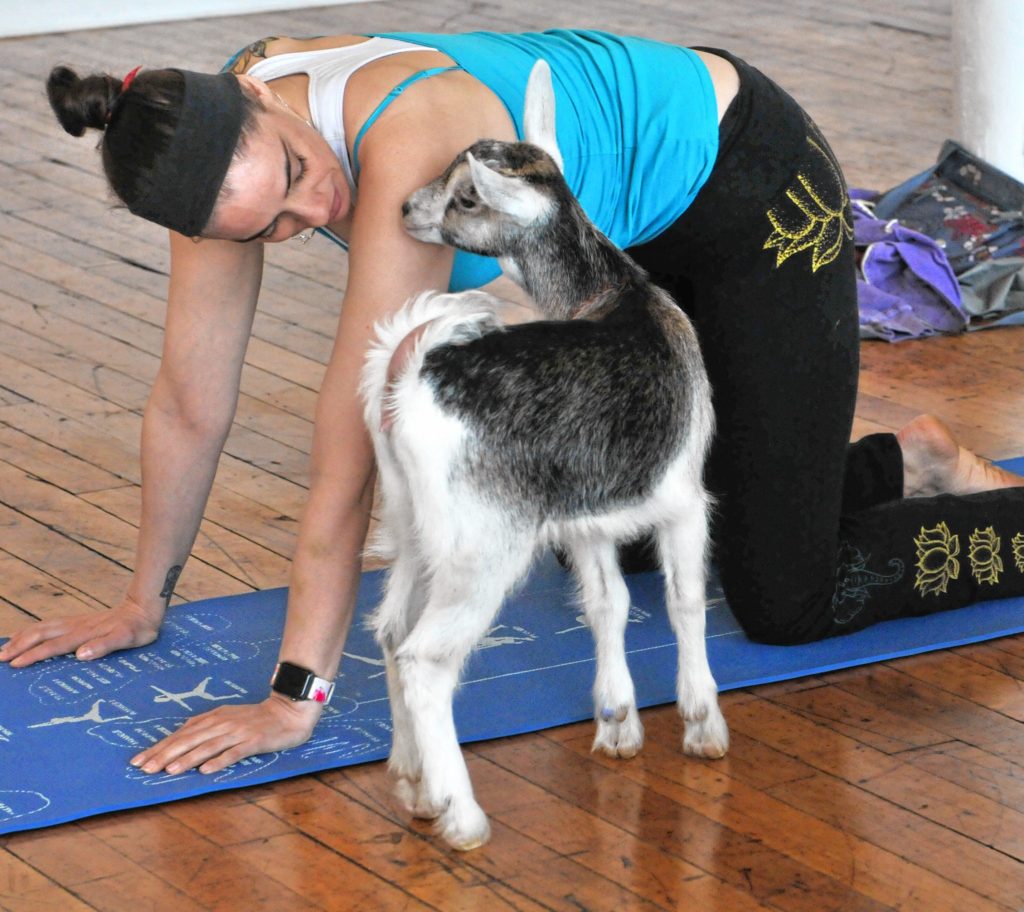 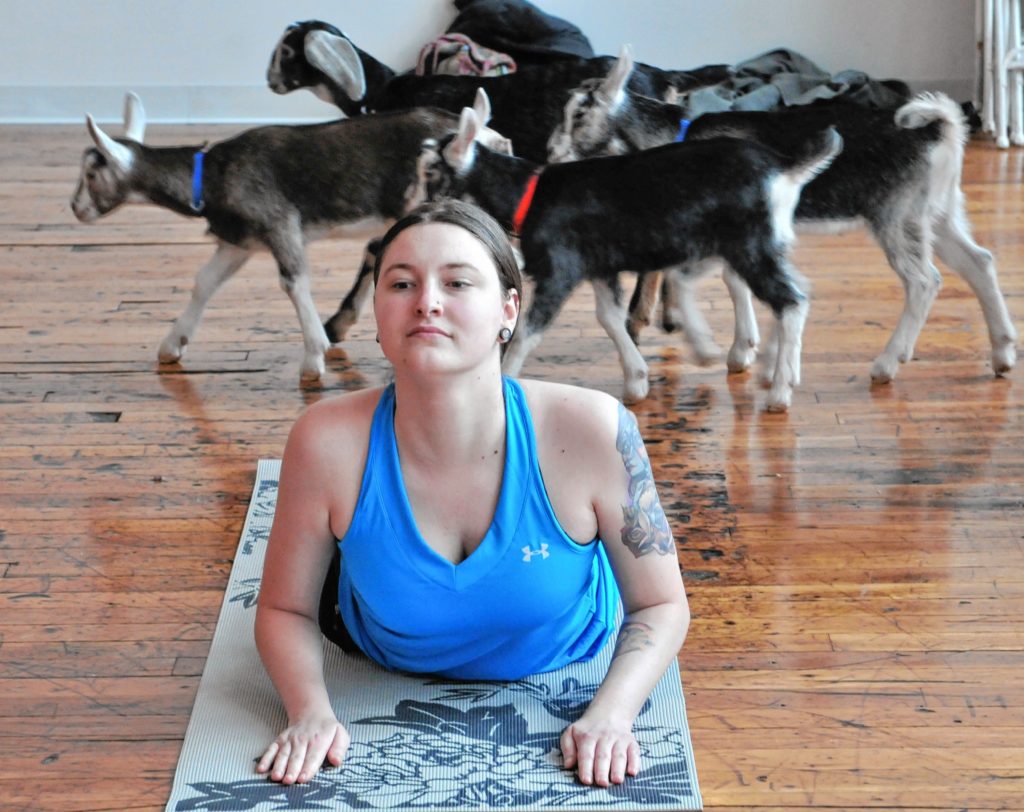 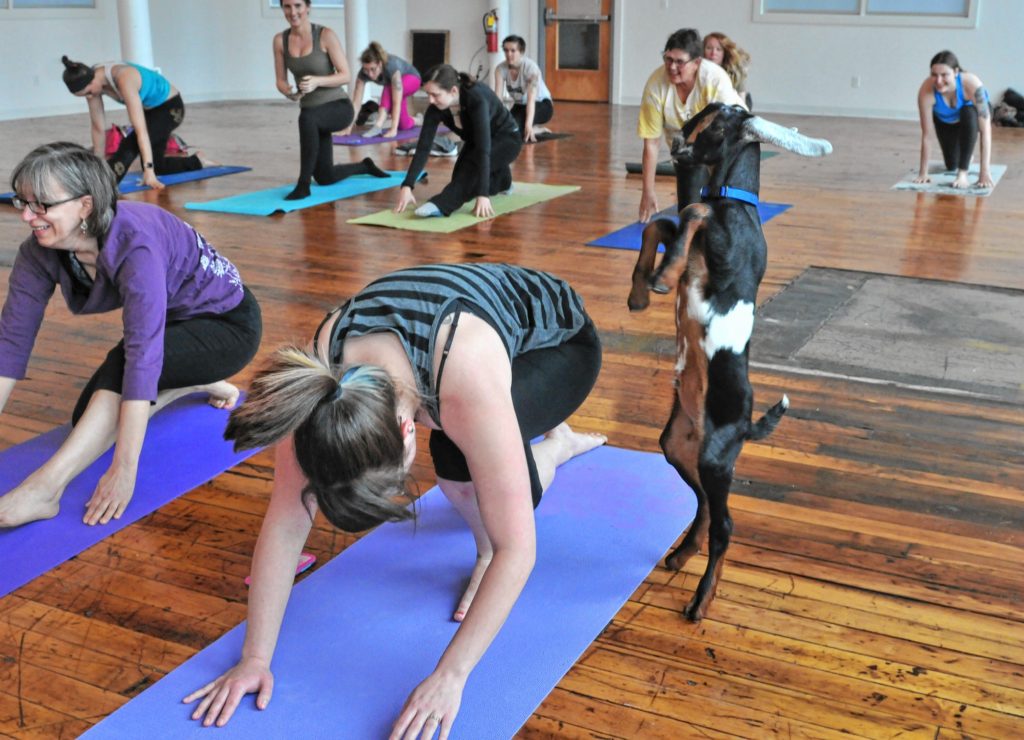 A goat plays around Amy Lapointe during Goat Yoga in Easthampton Friday afternoon. 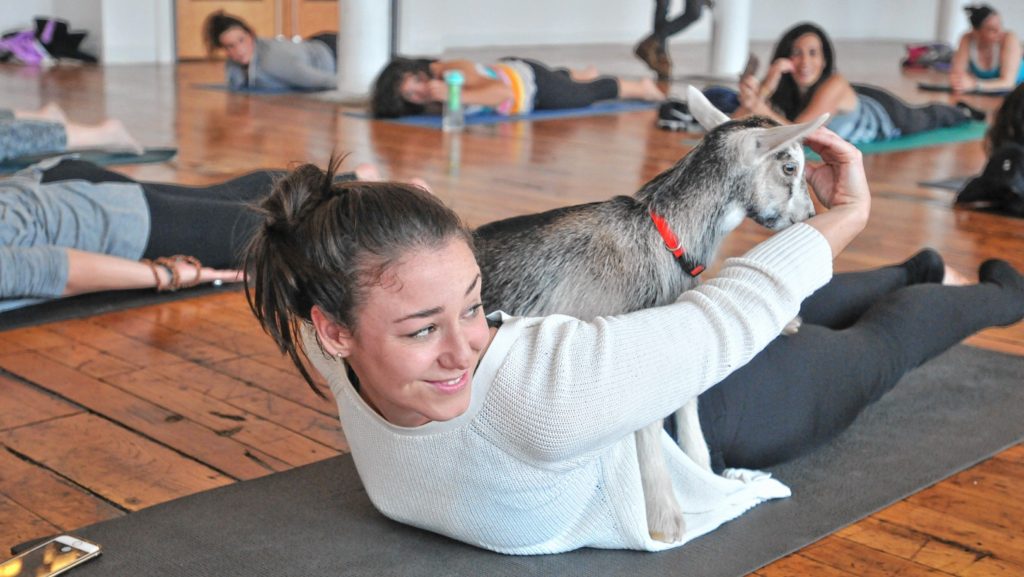 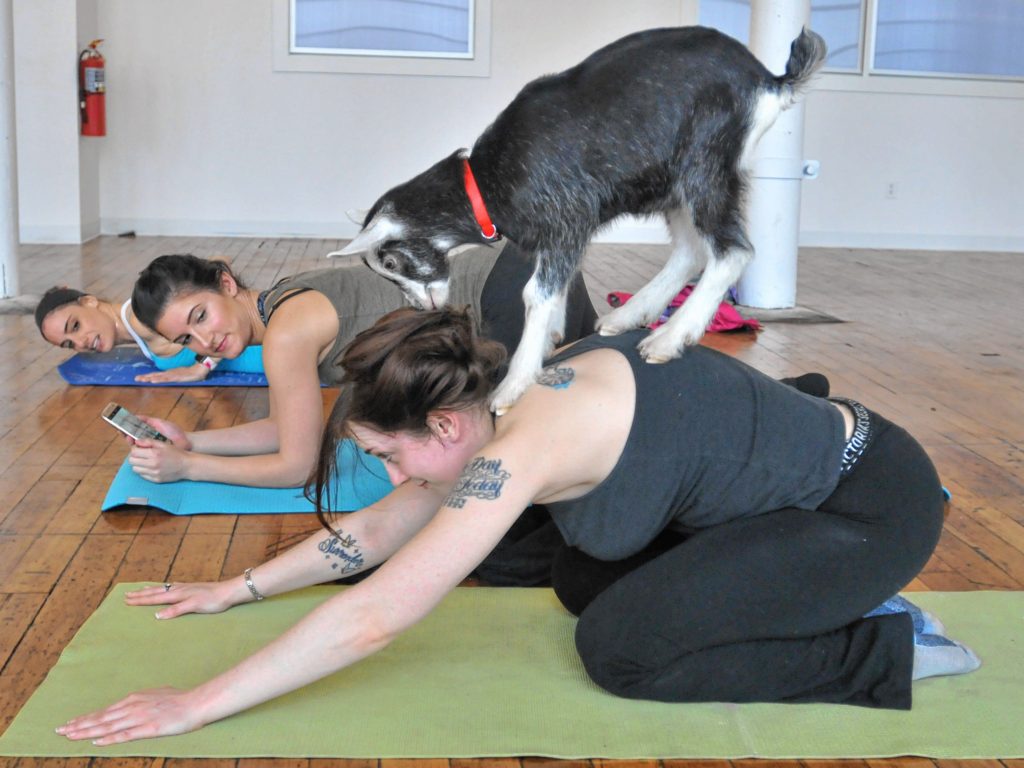 left, Cristina Fernandez and Melissa Baker watch as Karly Nickerson balances a goat on her back during Goat Yoga in Easthampton Friday afternoon. 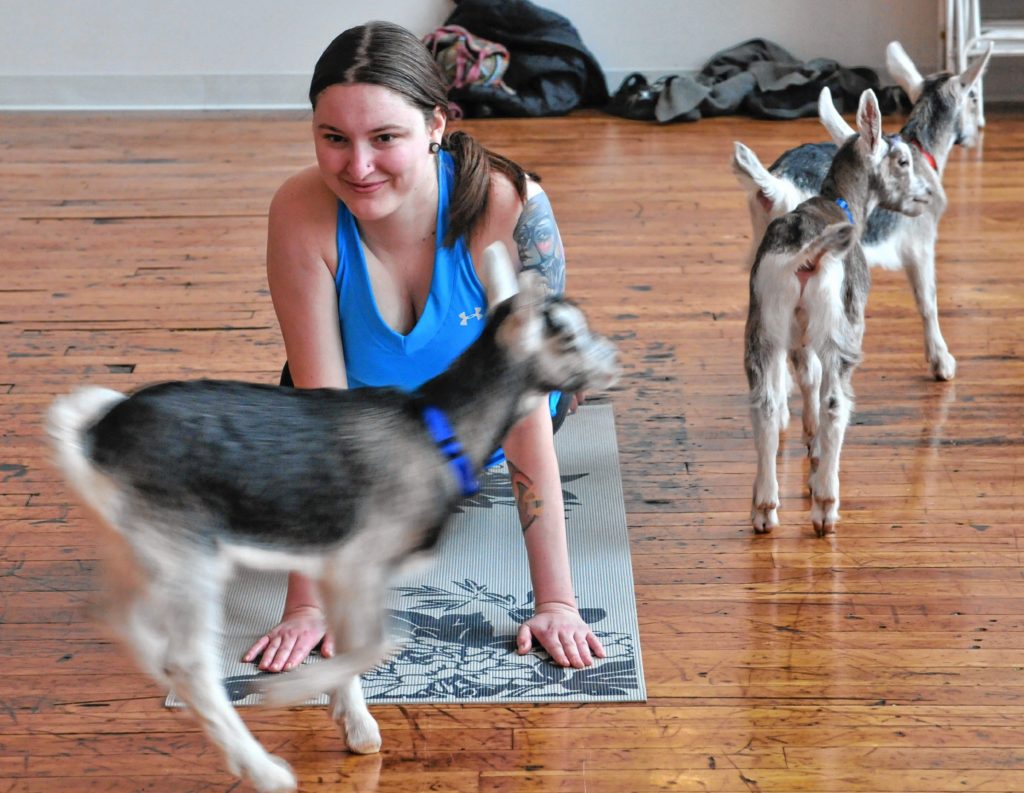 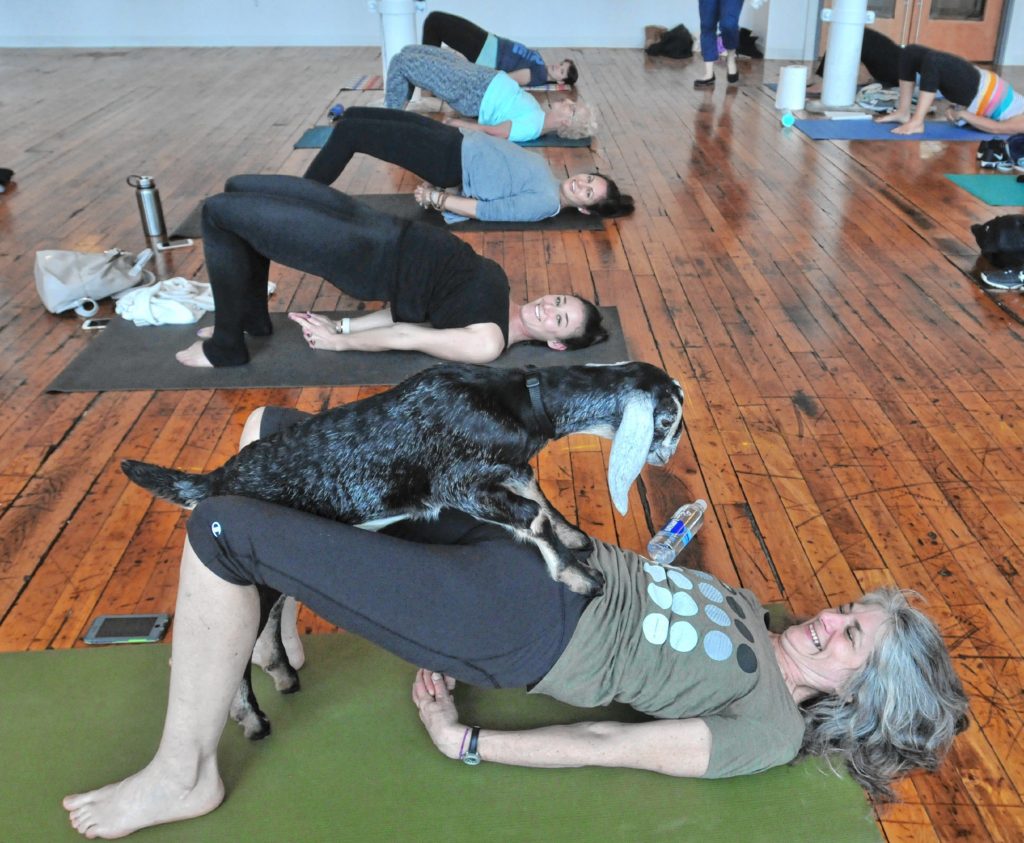 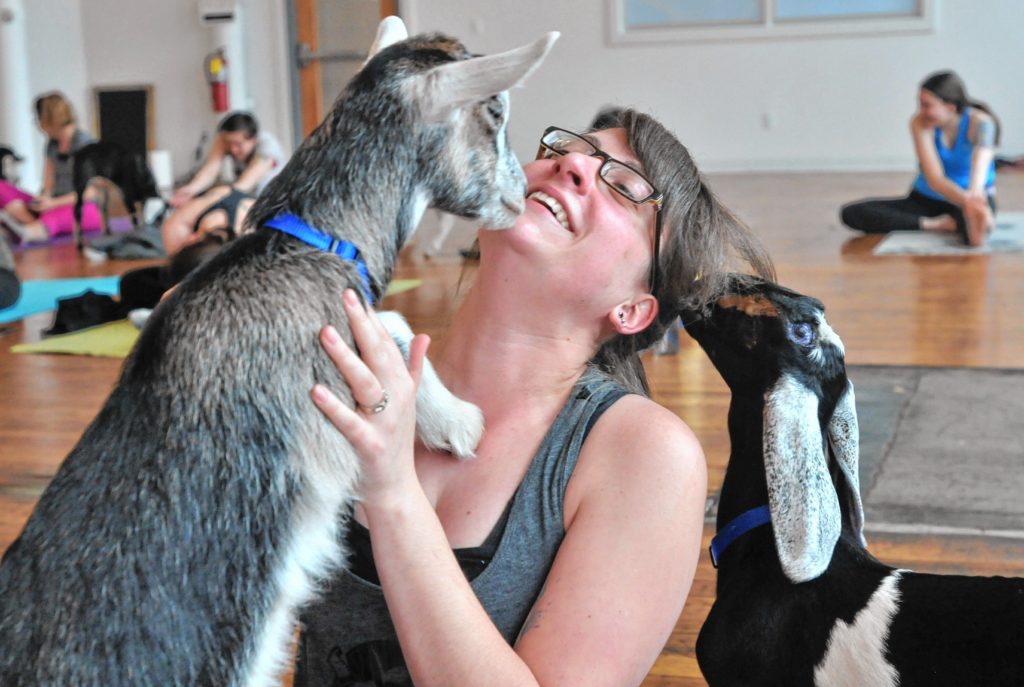 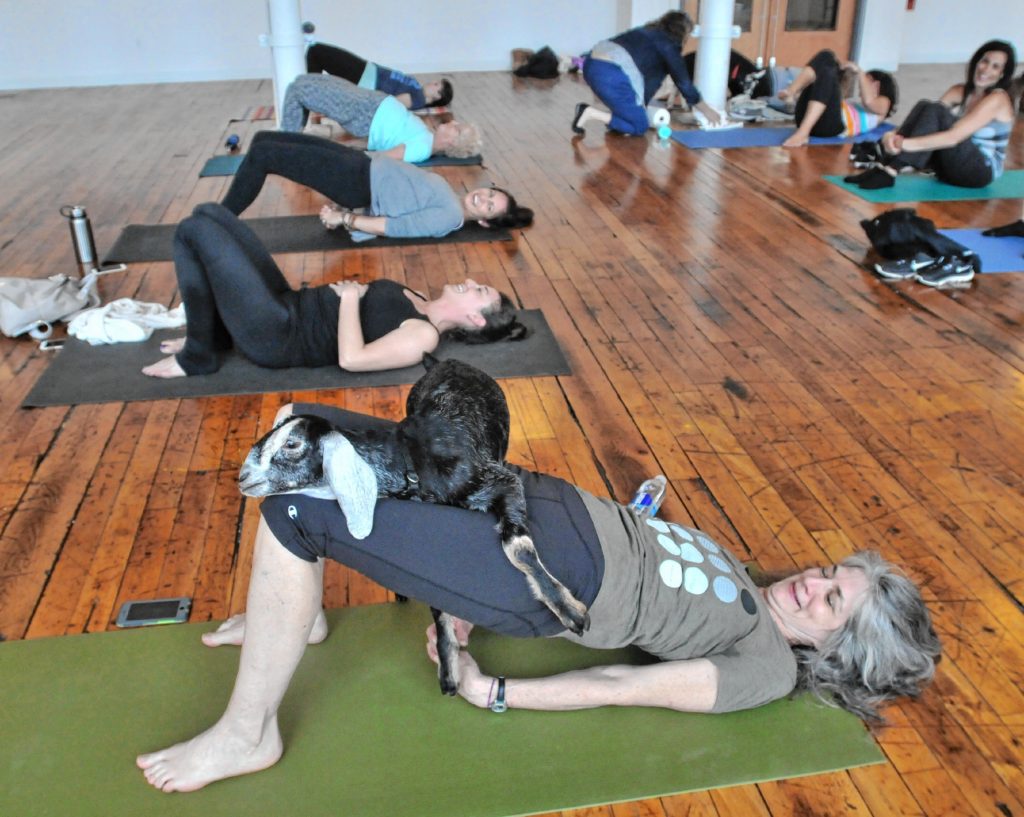 Stephanie Luyssaert laughs as a goat snuggles on Caitlin Lavinn's back during Goat Yoga in Easthampton Friday afternoon. 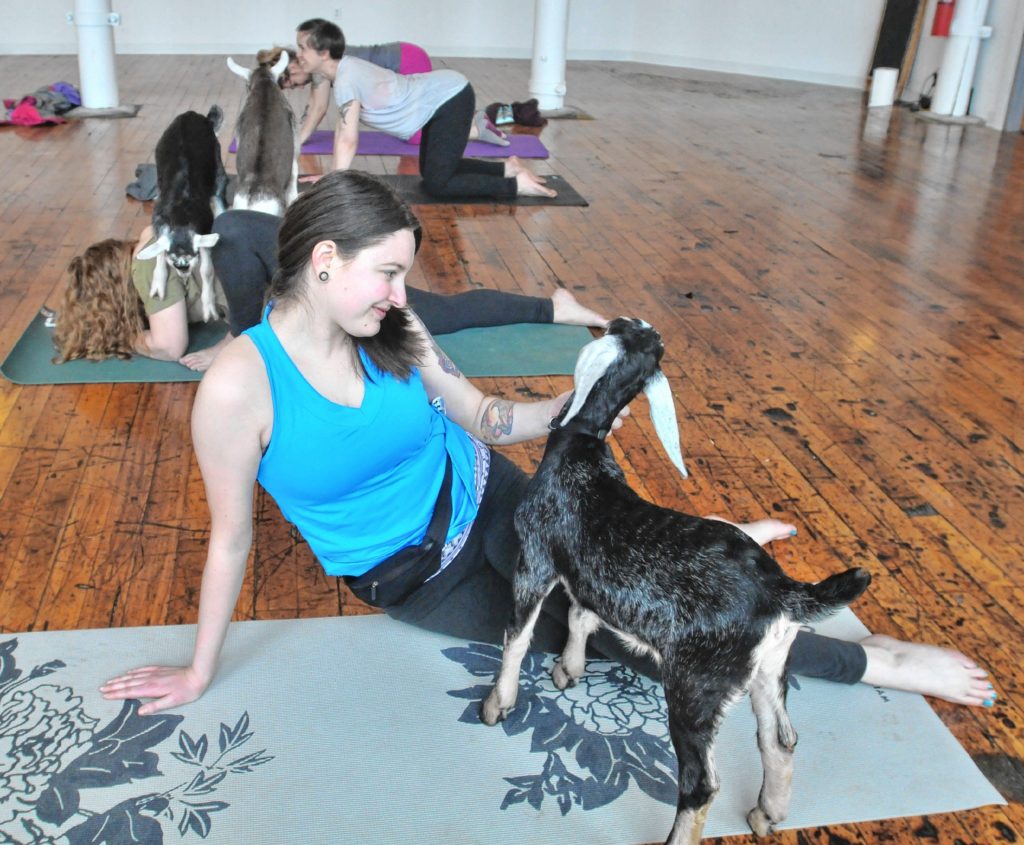 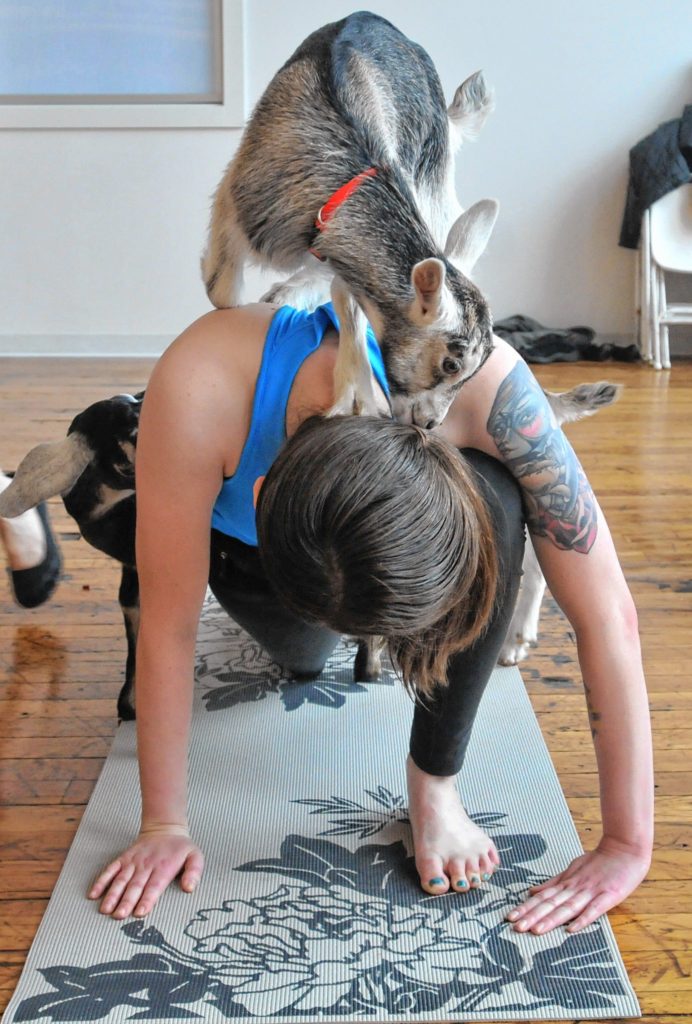 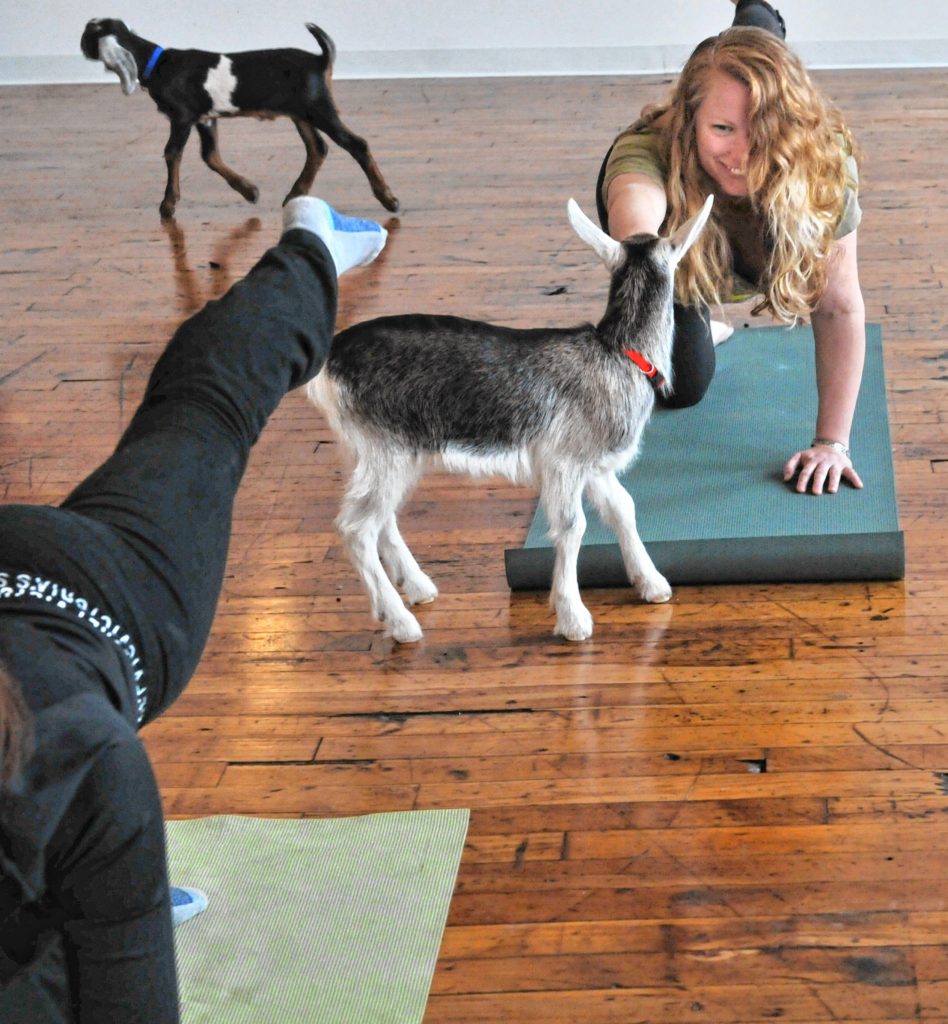 Tracy Davis reaches out to pet a goat during Goat Yoga in Easthampton Friday afternoon. 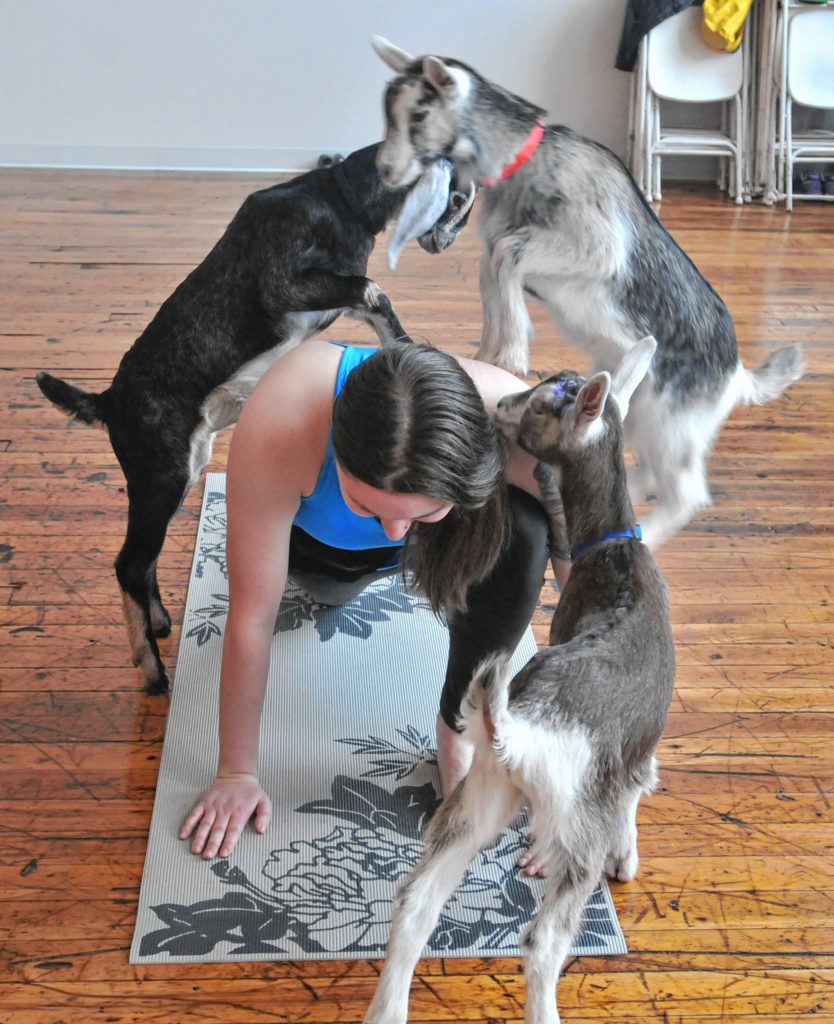 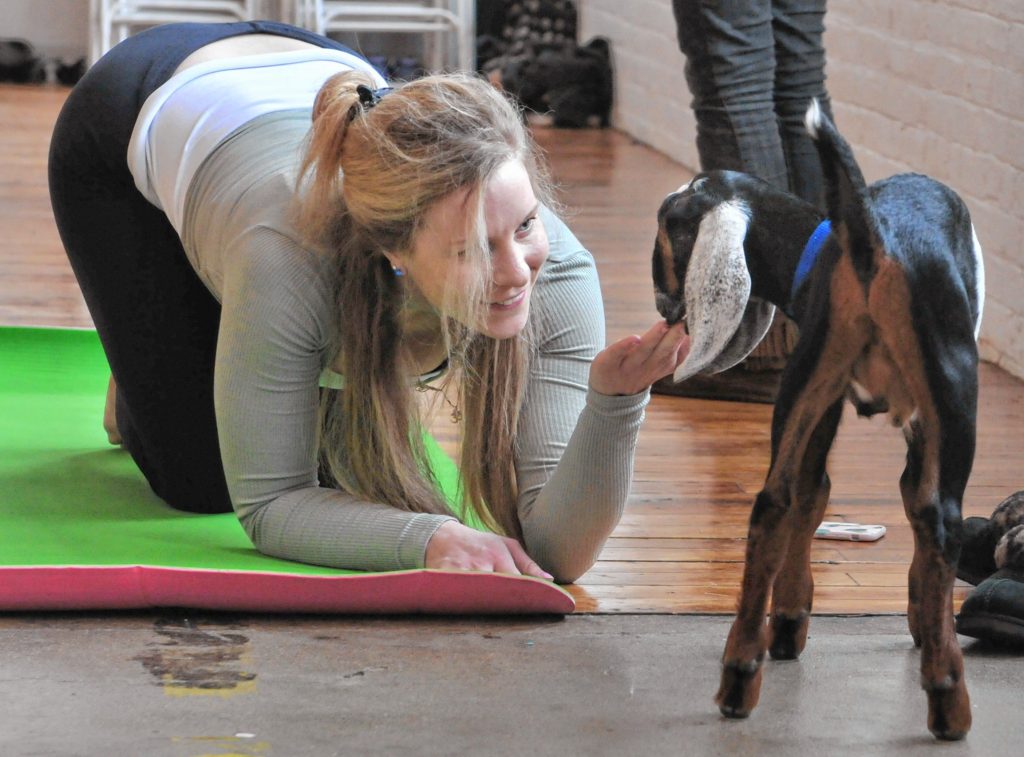 Maggie D'Amour takes a minute to say hello to a goat during Goat Yoga in Easthampton Friday afternoon.

EDITOR’S NOTE: This story originally listed writer Amanda Drane as the author of this story. It was written by Caitlin Ashworth. The Advocate regrets the error.

Audrey Blaisdell, co-owner of Valley Hot Yoga in Northampton, said she used many downward-facing positions designed to entice the goats to climb aboard, like plank, table pose and cobra.

“It forces us not to take ourselves too seriously,” Blaisdell said about the giggle-inducing class. “It’s hysterical and lovely.”

From a table pose, Blaisdell instructed the group to put their left arm up and left leg back. Laughter filled the room as goats sniffed the outstretched fingers and toes. Some got out of position to take photos of their goat-laden friends.

So-called “goat yoga” has become a trend across the globe, and Valley Hot Yoga and Sage Meadow Farm teamed up to make it happen in Easthampton. In doing so, they raised $1,500 for charity.

The funds will go to support the Easthampton Community Center, the Easthampton Farmers Market and Dakin Humane Society. This past month, there have been three goat yoga classes for $25 per person at the Keystone Building in Easthampton. Blaisdell said the classes sold out fairly quickly.

Sage Meadow Farm, owned by City Councilor Joe McCoy and his husband Stan McCoy, brought in seven young goats, their ages ranging from one month to only a few weeks. The McCoy’s company makes goat milk soaps that are sold at local markets and grocery stores. Soap sales at the events added another $100 to the donations.

Naturally, goats like to jump on things, said Joe McCoy, who has been raising goats for five years.

Jane Lapointe, who participated in that class with her daughter Amy, said a goat hopping on her back felt almost like a little massage.

“It was cute … almost therapeutic,” Ashley Lamoureux of Northfield said. “Yoga gets put on the back burner and you just want to play with the goats.”

Stephanie Luyssaert of Palmer attended a class last month. She said the last time she did goat yoga the goats were more mischievous — sniffing purses and shoes lined up against the wall, trying to eat notepads, and chewing on sweaters.

Blaisdell said no class has been the same. “I never know what to expect,” she said.

As the session came to a close, Blaisdell said, “now pretend to be in savasana.” Some people laid on their mats as goats walked over their bodies. Others tried to pick up the goats and pet them.

Three people walked around on “pee patrol” with a roll of paper towels just in case. The crew had a couple accidents to clean up, including a goat urinating on someone’s shoe.

More goat yoga classes are planned, but details may depend on the size of the goats. McCoy said they grow relatively quickly and the kids might be too big for the classes next month.

For those who would just like to pet the goats, McCoy said he will be bringing them to the Easthampton Farmers Market on May 13 at 50 Payson Ave.