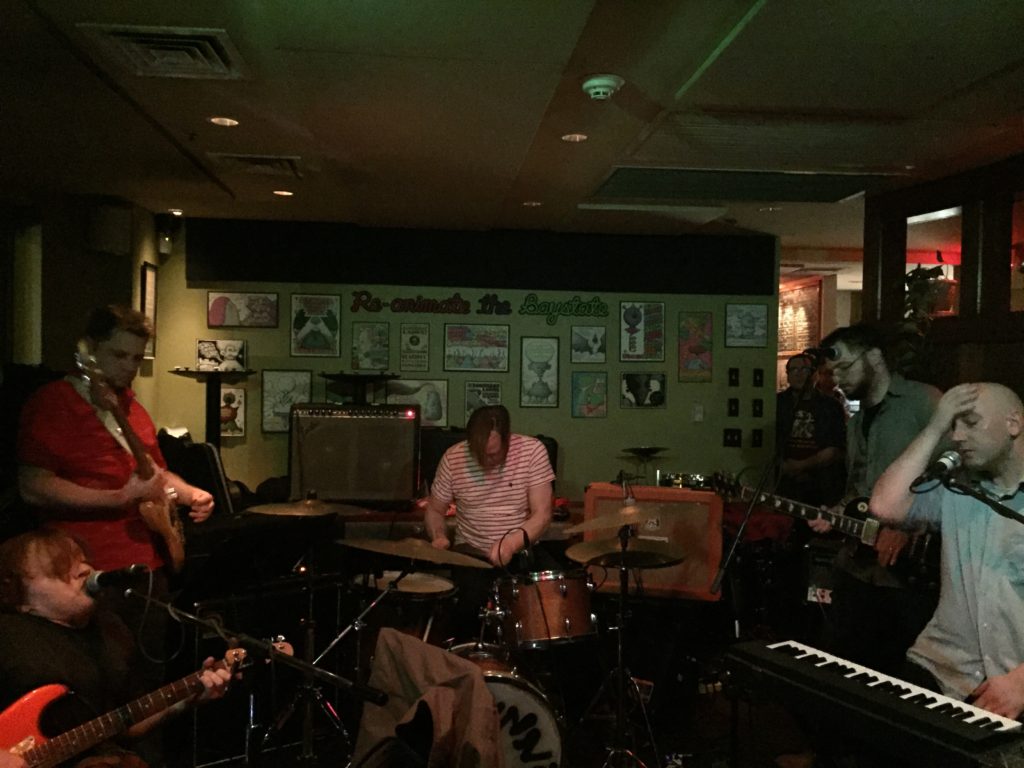 The nostalgia of Pearl Street in Northampton always brings back so many MMM’s (magical music memories) from my past. The way the street light illuminates that bend in the road where the tour buses usually line up is always a happy trigger for me. We can hear the Badfish (Sublime tribute) show through the paint chipped windows of Pearl Street Nightclub as we walk by to enter Sierra Grille next door.

The last time I was at Sierra Grille a couple years ago, it was for dinner and drinks, so I was curious about the show situation behind Re-Animate the Bay State. Every Thursday night, three bands are showcased, presented by Acorns in the Blender promotion. The cover charge is only $3. I say, that’s a pretty awesome deal, especially for the music lover on a strict budget.

We showed up a tad early, and the first band, Bunnies, were just setting up. We settled down in a booth with a Ginger Libation and an Alagash White. The lights slowly started to dim and the people who were gathered at the bar slithered to the back of the restaurant where the stage was set up. The atmosphere quickly morphed from restaurant to venue in a blink of an eye.

I’ve heard of Bunnies — from Northampton — before, but had never seen them until this night. Within the first few minutes I was kicking myself in the ass for never seeing them before. They are an energetic five-piece indie jam band that at times sounds like Pink Floyd, which sent me off to a fairy land. It felt like we were all listening to a continuous song with a gasp of air in between tracks. Once their set ended, I was already looking forward to seeing them again, and humming songs in my head I had just heard for the first time.

During the band switch over, I ordered the homemade chips and dip off the menu as a quick snack. I wanted to dive into that dip with a huge straw and just lounge in it, so delicious. I could hear the muffled sounds of Badfish’s rendition of Sublime’s “Date Rape” playing next door while I caught some fresh air and giggled to myself as I walked back inside.

Minibeast from Providence, R.I., was playing the center slot and the stoner-grunge that seeped off of them was incredibly intriguing. Mission of Burma vocalist Peter Prescott launched this band as an outlet for his interest in instrumental music. There were definitely vocals though, the alternative-styled haunting coming over the mic sent me back to the 90s, and I loved it.

Hot Dirt from Holyoke closed the show. Looking around, the room was very dark but the shadows of bodies were packed in, excited to see them perform. It’s hard to describe them. In a nutshell they are wildly heavy with a touch of funk/jazz and even some hardcore/punk. Their sound is all over the place, in a very good way. The intricate guitar picking, dual gender vocals and the speeding beat of the drums peaked my interest. Once they all started chanting “Did you know that Danny Devito is 6’2,” I was sold. They are weird and talented … the perfect combination.

Re-Animate the Baystate, Every Thursday from 10 p.m., to 1 a.m, at The Sierra Grille, 41 Strong Ave., Northampton.