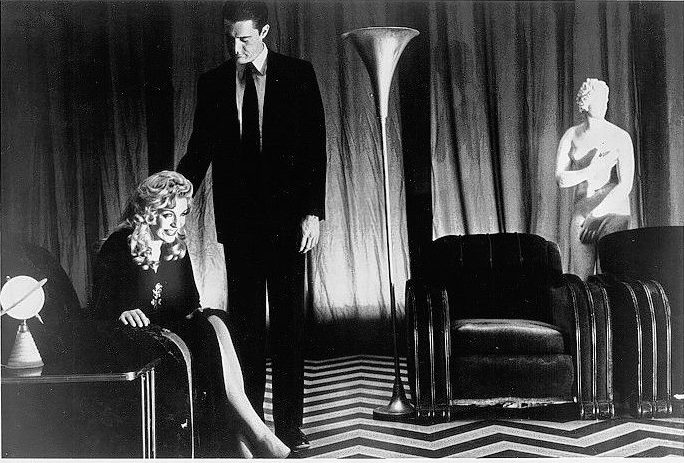 Amherst Cinema is gearing up for the return of Special Agent Dale Cooper. Kyle MacLachlan returns to TV this week in his early role as Cooper, the FBI man who got tied up in the death of Laura Palmer and the mysteries of Twin Peaks when the show of the same name first aired in the early 1990s on ABC. I was in high school then, and watching the original was a life-changer: it was dark and weird and funny and sweet in a way nothing had been until then, at least on network television. It was too much for the time, and couldn’t last; it died after just two seasons, but its influence has been felt ever since. Now it’s back, on Showtime for this go-round, in an 18-episode limited series, and creator David Lynch (Inland Empire; Eraserhead) is on board as director.

The reboot is promising to be quite a ride, and Amherst is setting the stage by screening Twin Peaks: Fire Walk With Me this Friday night at 9:45 p.m. Lynch’s prequel to the original series is a look at the last week of Laura Palmer’s life, before her floating body, wrapped in plastic and dragged from a local river, kick-starts one of the strangest stories ever told on television. A bit of a bomb on its release — fans were upset that the story didn’t resolve those nagging questions the series left hanging — Fire Walk has held on to be recognized as a fine film in its own right, as well as a worthy addition to the Peaks lore.

If you don’t know the series, this is a good place to begin; if you know it already, now is your chance to catch up with old friends before the big reunion.

Also: We live in the age of streaming. It’s been years — I’m not even sure of how many now — since I owned a dedicated DVD player. If I’m watching a new movie at home today, it’s nearly always online in one form or another: iTunes, Netflix, Amazon Prime, Hulu, and the list goes on. All of it gets funneled through my Apple TV (a box about the size of a hockey puck) to the big screen in my living room that used to be called the TV — it doesn’t show much actual television these days.

But if the technology allows us all to watch whatever we want whenever we want it, there is a bit of a price to pay — or prices, as it were. Since most streaming services are subscription based (for now at least, iTunes remains an a la carte affair), you’re paying whether you watch or not. And that can mean a whole lot of “ten bucks a month” fees adding up quickly.

Now, film lovers in the region have another streaming option, and all it takes is a library card — specifically, a card from Forbes Library in Northampton. Forbes is one of the first public libraries to sign on as a provider for the on-demand video service known as Kanopy, which began in 2008 to serve educational institutions but is now branching out to offer access to the public. The library foots the bill (which is why, notes the Forbes’ Dylan Gaffney, you need to get your card from a specific library), and patrons can watch from any device with an internet connection, including smartphones, Roku Apple TV boxes, and laptops; you won’t be stuck in a library cubicle.

Befitting the service’s roots in education, much of Kanopy’s content skews toward the “good for you” sort of filmmaking, but don’t mistake that for medicine. Absent are the waves of tripe that can make Netflix such a slog; instead, the offerings include playlists like “70 Years of the Cannes Film Festival,” sections on street art, science fiction, and musicals, and a rich trove from the “Criterion Collection” (399 videos, to be exact) which would keep any film buff busy for years — they do, after all, limit you to eight films a month.

In all, it’s a breathtaking collection of some of the most groundbreaking films and ideas of the last 80 years; what I’ve mentioned here is simply a tasting menu. And all of it at your fingertips, with just one old-fashioned library card.