Valley Show Girl: Alt Jazz With The Greys at The Still in Agawam (w/vid) 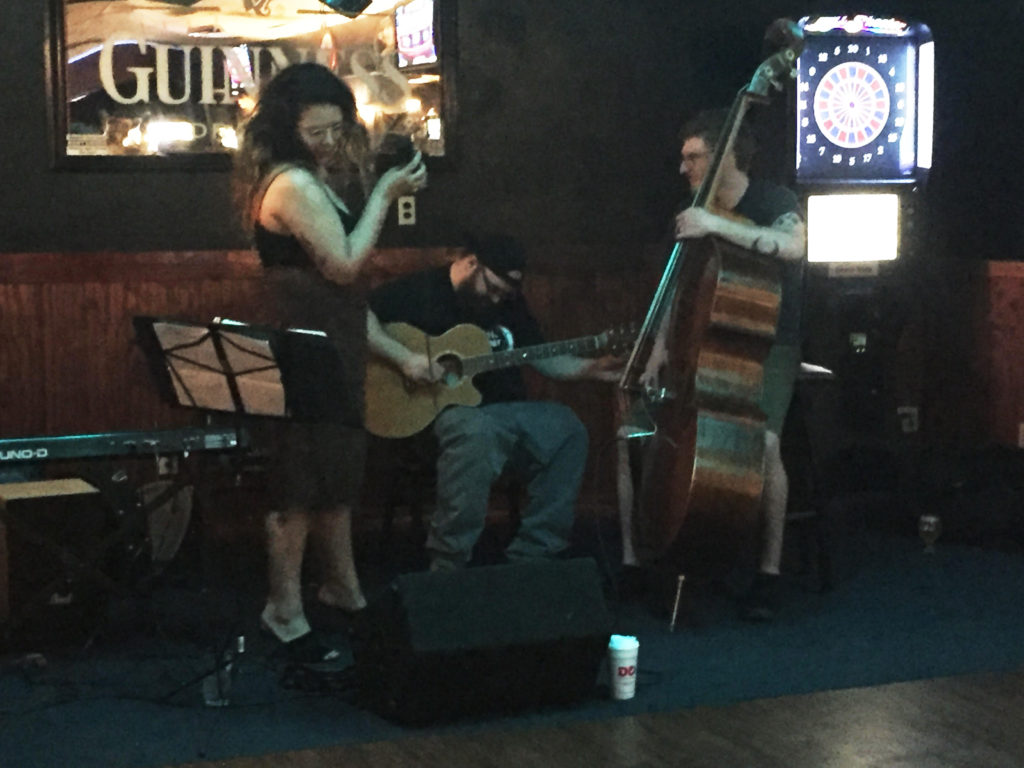 A couple of weeks ago on The Still’s Instagram page they posted a beautiful picture of a mint julep. I’ve never had one, but always wanted to try the drink simply because that’s what they drank in The Great Gatsby. So, when I saw that The Greys were playing at The Still, I was like “Yes! I get to drink a mint julep while listening to jazz, so Daisy Buchanan of me.” And that I did. Although, I learned I don’t like mint juleps, but I do like jazz!

At The Still I nestled up to the central bar, which separates the bar area from the venue/dining area. The constant chatter of the attendees from either side of the building soundtracked the after work Friday evening while The Greys were getting ready for their set.

The soothing, yet powerful voice of singer Cait Simpson sent electricity through the mic. She danced like she’s got a gypsy soul – free and beautifully. Bass player Chris Merritt plucked his standup bass with steady posture and I watched the crescent moon tattoo on his fret-playing arm fly into orbit. They played an original, “Circus,” and it sent the sudience off on the ride to an alternative style of jazz.

Cait told little tales in between songs; letting us in on what each piece is about and introducing specific covers the band is reinventing. She also told us she and Chris met at Holyoke Community College seven years ago and have been friends ever since. Clearly, a meeting destined to happen since the two have amazing musical chemistry. They fold perfectly together.

When playing longer sets, The Greys invite their friends up to play. On this night Tim Zucco, guitarist of The Big Sway, joined them to play guitar on an amazing cover of Fleetwood Mac’s “Dreams.” The close-to-seven-minute song was orchestrated smoothly. After a short break, they played the theme song from Star Wars, which soared through the electric bass and the Roland synthesizer played by guest Tyler Cook. Cait joined them on stage and belted out Amy Winehouse’s “Valerie.” It sent chills all throughout me and made all the hairs stand up straight on my body. “Valerie” is one of my favorite songs and they do it justice.

The Greys’ song, “Lullaby,” made me want to go into the bathroom and cry my eyes out. It was so beautiful and sad. It reminded me of that specific movie that you love so much, but it kills your insides to watch it and the story sticks with you for days. But it’s also the movie you’ve watched the most.

Encore!: This Valley Show Girl recently took a trip outside of the Valley to Boston to see the progressive-metal gods Mastodon last week. They are one of the best national bands to see live, in my opinion, though I usually prefer to stick to local shows. The coolest part about the show was the exploding mosh pits everywhere on the floor. A friend and I started in the middle and were pushed up to the very front. Easiest merge to the front of the stage at a huge concert ever in my life. Highly recommend checking them out if you like your metal deep and sludgy, with a ton of progressive stonery goodness and lyrics like poetry to the soul.