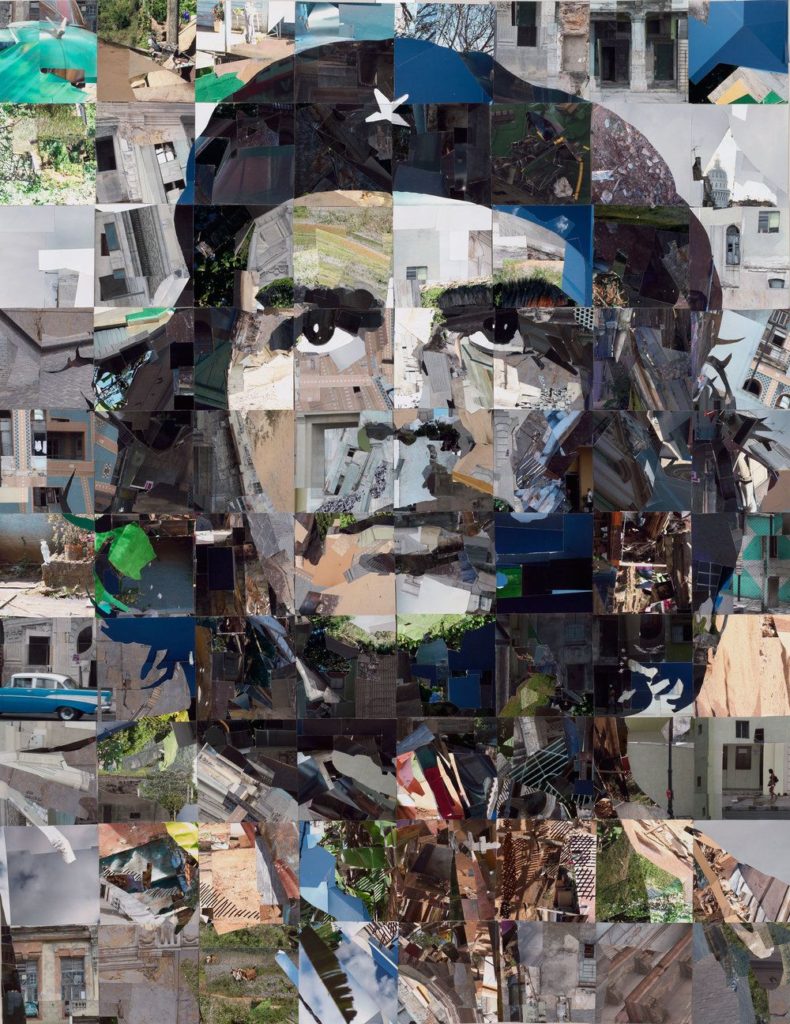 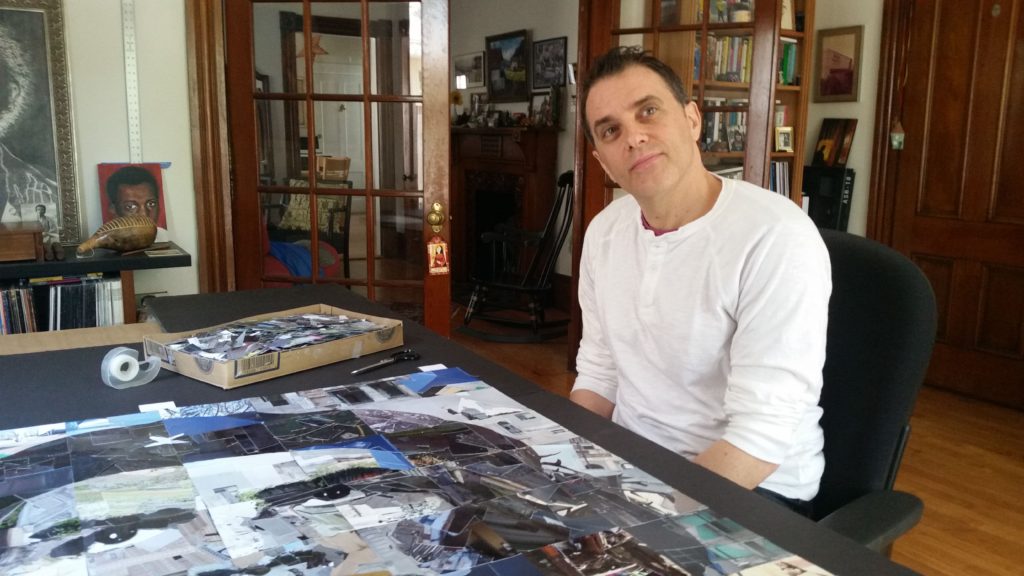 Mark Guglielmo at home in Northampton with one of his most recent collages. 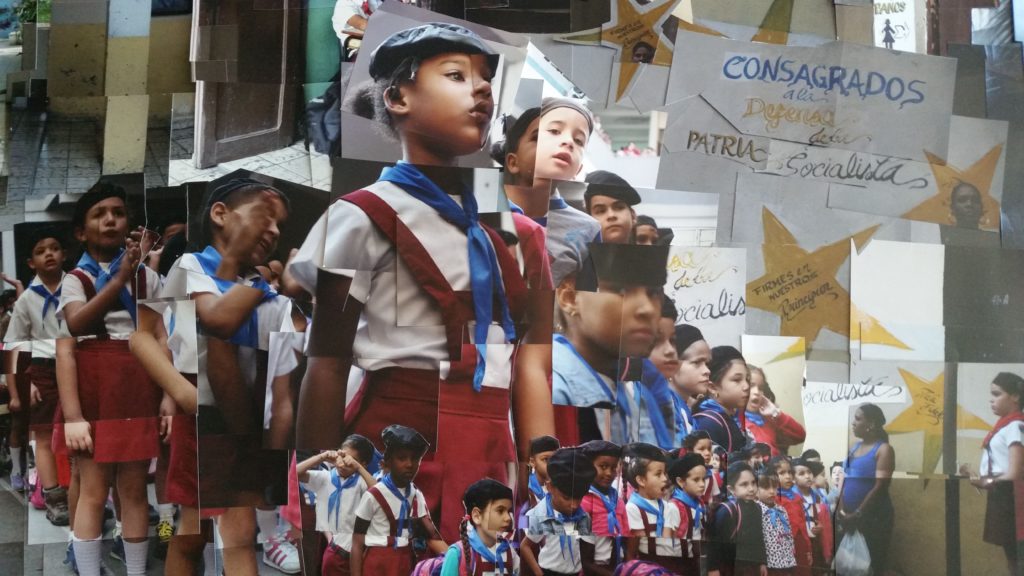 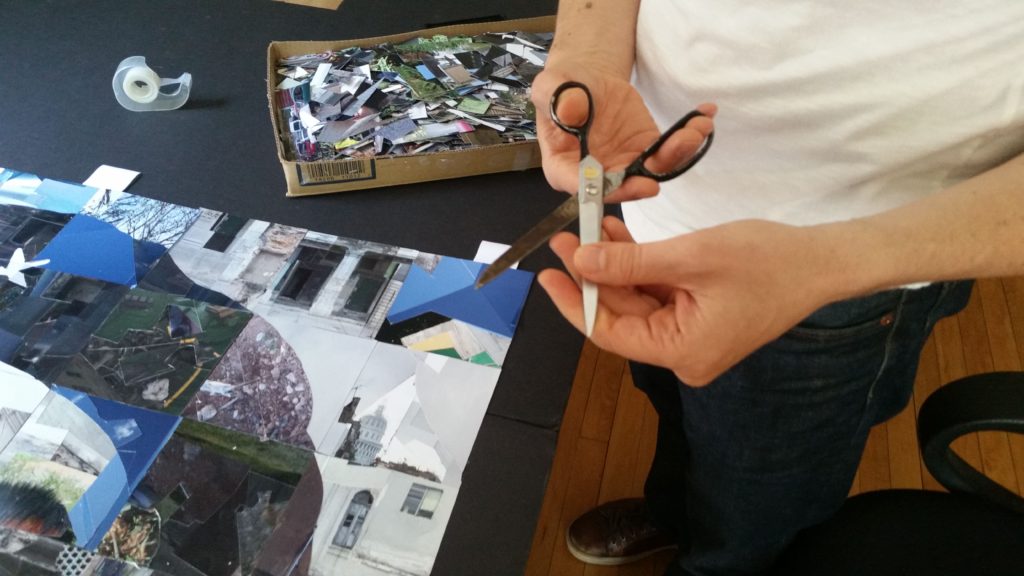 All Guglielmo needs to make art: an old pair of scissors, some Scotch tape, and photo scraps

Mark Guglielmo’s collages are the physical manifestation of memory.

The murals seem fluid; Guglielmo play with size and scale to emphasize pieces of a scene over others. He adds details from nearby times and places into the work, much in the same way people blend details when recalling travel.

On June 1, the A.P.E. Gallery on Main Street in Northampton will debut Guglielmo’s latest work Cuba in Transition, a series of photo collages using images taken by Guglielmo, 46, on his trip to Cienfuegos, a community inland from the southern coast of Cuba, in 2016. Each piece is five to 15 feet long and accompanied by audio interviews with people Guglielmo photographed and natural sounds from the Cuban landscape. The murals are made from hundreds and sometimes thousands of individual, sliced up 4-by-6-inch photos. There was no computer or Photoshop used in the collages’ creation. 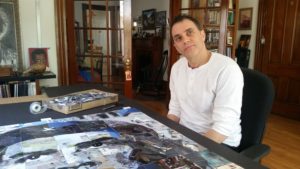 Mark Guglielmo at home in Northampton
with one of his most recent collages.

Cuba in Transition focuses on the Communist nation since President Obama loosened travel and trade restrictions between the nations in 2015-16. The normalization of relations between the U.S. and Cuba — which were fractured in 1961 when the U.S. tried to invade and in 1962 when Cuba allowed the Soviet Union to station nuclear weapons on the island within 90-miles of the U.S. — is altering the island and its people. For example, an influx of tourism is creating wealth for some, but is also taxing an underprepared travel and hospitality infrastructure.

Guglielmo followed his passion for salsa music and dancing to Cuba for the first time in 2015 when a Cuban-American friend offered to take Guglielmo and their dancing buddies to the island to experience serious salsa. He’s been back twice since.

“There’s a lot about Cuba that is really old school,” Guglielmo says. “It’s like walking into a different time. That time is changing.”

Last week, Guglielmo provided an in-home sneak peek of a few of the pieces that will be in the gallery exhibit: a long collage of an elementary school’s morning assembly, a landscape portrait of the tobacco farms and mogotes (craggy, stubby hills that jut up from the landscape like towers) of the Vinales region, and a reimagining of Che Guevara’s iconic visage. 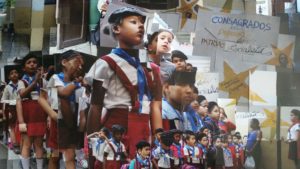 DETAIL: A portion of Mark Guglielmo’s
collage of Escuela Primaria Guerrillero
Heroico, a Cuban public school, kind of
like an American charter, that is
devoted to the teachings of Guevara.

Even spread out on the floor of Guglielmo’s home/workspace in Northampton, the school mural is stunning and filled with rewarding details. In a cement courtyard in the center of the school, uniformed students in berets stand at attention — as much as children can muster, anyway. Student leaders, faculty, and the principal lead the children in patriotic songs and pledges.

The first image that jumps out at the viewer is of a girl, standing tall and proud like a statue with eyes that see forever. Guglielmo has increased the size of the girl so that she is apart from her classmates, but without overshadowing them. In her eyes and jawline are determination. She looks like a leader.

In the rest of the mural, you can see the various earnest expressions on students’ faces, and the adorable colored pencil-patterned button up shirt the principal wears. You can see inside of a classroom where a teacher stands with her hand on her hip delivering a lesson. And you can see posters in the courtyard of Guevara and photos of Fidel Castro throughout the years, from boyhood to old age.

The size, motion, and emotion of Guglielmo’s mural gives the viewer this memory of Cuba to keep.

“I want to capture the essence of the feeling,” Guglielmo says. “I want people to know the look, the feel, the tone, the energy of what it felt like there.”

Guglielmo says his way of making art is natural and never forced. When he goes out to make a collage, it’s usually with his camera and without any preconceived notion of what he will chose to focus on. He goes where life takes him — and it hasn’t let him down yet.

“I don’t go on a mission; it comes to me,” Guglielmo says of his inspiration.

It’s also how Guglielmo builds his art. For the school mural, Guglielmo began with only the idea that he wanted to take a portrait of Alejandra, the daughter of his friend, artist and architect Vladimir Rodríguez Sánchez.

“I saw his daughter coming back from school and she was wearing the beret — the ‘Che beret.’ That’s so Cuban,” Guglielmo says. “I wanted to get a portrait of her, like the new Cuban, but Vladimir said I have to show you this.”

If one student in a beret was good, one hundred would be better. Rodriguez Sanchez helped Guglielmo meet with the principal of Alejandra’s school, Escuela Primaria Guerrillero Heroico (a public school, kind of like an American charter, that is devoted to the teachings of Guevara) and convinced him to allow for the photography. The principal was wary of students’ photos being used to send a negative message about Cuba.

“I had to talk to the principal for a while,” Guglielmo says. “I had to introduce myself to him. There is a long standing history of Americans going in and — there’s spying and shit like that — but there were a lot of people that took what Cubans were doing and put a bad light on it.”

The principal was also concerned that Guglielmo’s presence would distract students from their education.

“In Cuba, the two most important things are taking care of children and education. Teachers are very respected,” he says. “I couldn’t upset the kids when I went in, I couldn’t talk too loud.” 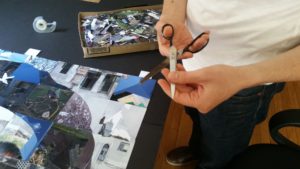 All Guglielmo needs to make art: an old
pair of scissors, some Scotch tape,
and photo scraps.

When he got back to the U.S. and printed the thousands of photos he had taken on the trip, Guglielmo began the mural where he started, with Alejandra. Working in sections, Guglielmo built pieces of the school from memory: groups of children, balconies, the stage, doorways, and sky.

Guglielmo’s collages take accurate representations of a place or person — photos — and cuts them into smaller more wild versions of themselves that somehow better describe the feeling and sense of a place better than a photograph ever could.

“I work intuitively,” he says. “I know when I’m finished with a piece because it feels right.”

For the Guevara portrait, Guglielmo tried a different approach from how he normally builds collages. Instead of starting with a blank space, Guglielmo printed out a large black and white image of Alberto Korda’s infamous Guerrillero Heroico (1960) — it required dozens of sheets of standard printer paper to contain the piece. Next, Guglielmo took the individual papers and worked on them one by one — meaning, using scraps leftover from his other Cuban photo collages, Guglielmo built a section of Guevara’s hair, then a piece of beret, then some white space, and so on. Then he put the pieces together hoping for a recognizable portrait.

“I didn’t know what it would look like until I put it together, but I knew it would be interesting,” he says.

Guglielmo says he’s looking forward to his next trip to Cuba in February, 2018. Cuba in Transition will appear in a joint show with Yudit Vidal, a philosophical artist, at a gallery on the coast.

“This whole exhibit goes in February to Trinidad de Cuba, a hillside colonial city that’s well-preserved,” he says. “It’s a joint show. It’s an honor to show my work there.” 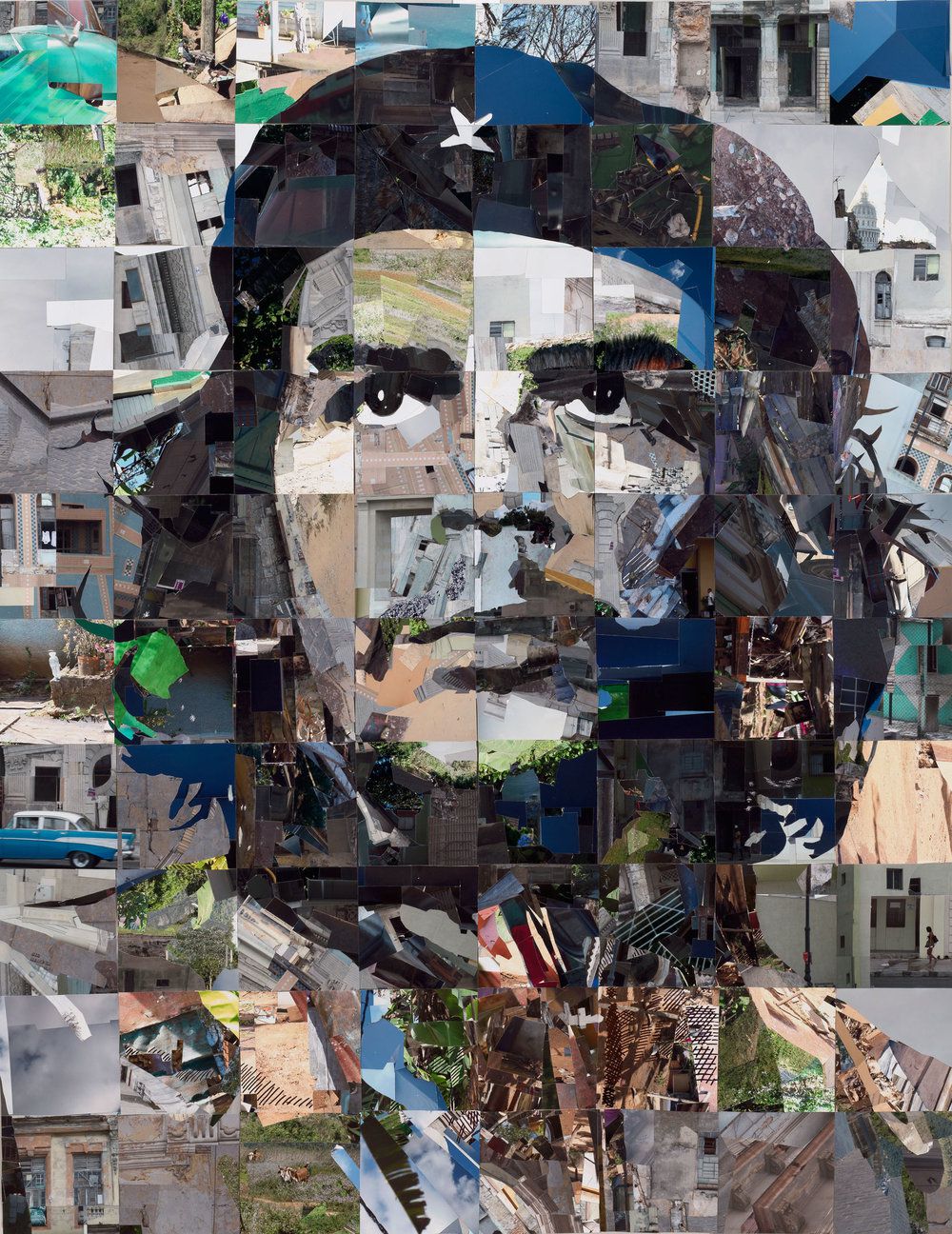