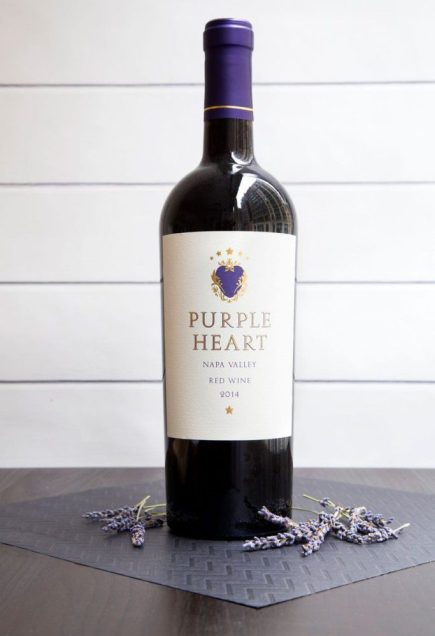 Generally, I’m reluctant to get overly excited about wines with a cause. They often seem like gimmicky marketing ploys to promote less than stellar wines by pulling on your philanthropic heart strings.

But every rule has a few exceptions: A couple of years ago I recommended Chateau La Paws, which gives money to no-kill shelters for cats and dogs.

Purple Heart, too, is worth recommending because it’s a very good wine, and there’s the benefit of knowing that a portion of the company’s sales go toward helping military veterans recover from the traumas of war and return to as normal a civilian life as possible.

The wine is produced by C. Mondavi and Family in collaboration with the Purple Heart Foundation, with military veterans heading up the winemaking. Since the launch of Purple Heart in 2016, the company has given $30,000, and on Memorial Day plans to make another donation.

In 2016, the Purple Heart Foundation, which was founded in 1957, received $35 million in donations, according to the organization’s annual report.

The money is being used for research and to help wounded veterans get treatment for such effects of war as post-traumatic stress, traumatic brain injury, sexual trauma and suicidal tendencies. The foundation also helps to resolve benefit claims, provide employment training and college scholarships, the organization’s website says.

The deep, ruby red 2014 Purple Heart has aromas of plum and cinnamon and flavors of red and black berries with a long, silky finish, winemaker Ray Coursen says in the tasting notes.

Coursen, who served for 19 months in Vietnam during the war, says the wine is ready to drink now, but will gain complexity over the next four or five years. My wife, Sandy, and I enjoyed a bottle of the wine paired with grilled pork tenderloin recently, and it was an excellent match. I also took Coursen’s advice and stored a bottle to have on a special occasion in a couple of years.

In making the 2014 vintage, Coursen was assisted by consulting winemaker David Grega, a rising star in the California wine world and an Iraq war veteran.

For the 2015 vintage, John Moynier, a Vietnam era Air Force veteran, is the sole winemaker. He has been the head winemaker with C. K. Mondavi and Family since 1985 and is credited with bringing the company’s flagship brand, Charles Krug, back from the financial doldrums by greatly improving its Cabernet Sauvignon and other wines.

C. Mondavi is run by the sons of Peter Mondavi, who died at 101 years old last year. In 1943, Peter and his brother Robert Mondavi convinced their father, Cesare, a grape shipper, to buy a derelict Napa Valley vineyard and winery founded in 1861 by Charles Krug, a Prussian immigrant. They paid $75,000, Peter Mondavi’s obituary in The New York Times said.

Peter and Robert had differing philosophies about how the company should be run, and after 20 years, there was a huge, bitter argument. Peter and their mother, Rosa, forced Robert out of the company. He borrowed some money, started the Robert Mondavi winery and sued his family. It took 10 years, but a judge ruled in Robert’s favor, awarding him valuable Napa Valley acres and $4 million for his interest in Charles Krug.

The charismatic Robert Mondavi went on to build one of the strongest brands in the wine world and to be considered the godfather of California wines. He died on May 16, 2008, at the age of 96.

The brothers reconciled in 2005 and produced a barrel of Cabernet Sauvignon blend together. It sold for $400,000 at the Auction Napa Valley, the area’s annual top social event.

The judgment in Robert’s favor set Peter, and Charles Krug, back, and the company languished, producing mediocre wines until Peter hired John Moynier in 1985. Today, Charles Krug is a respected brand with a cloudy past.

I realize that $20 is far out of the $10 range, but the wine is well worth the price for a special occasion. Consider the extra money for the wine a donation to an excellent cause. It also goes on sale for as little as $13.99, which is a steal.

Purple Heart is widely available until it sells out.