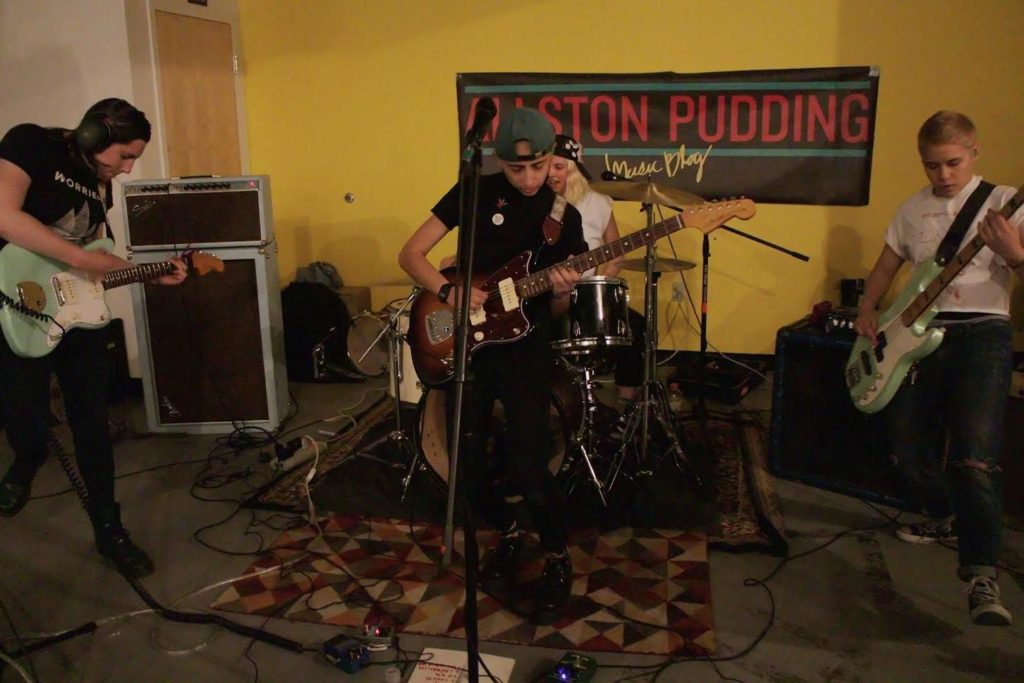 Valley musician, student, and DIY booker Jaclyn Walsh wants you to dump your boyfriend so much that they named their band Dump Him.

On the surface such a statement might charm the misandrists and queercore punks more than it appeals to standard bearing capitalist-hetero-patriarchs. But to only look so far would be to miss the point — or the attitude and ethic behind the band. Just beyond the biting snark (which is commonplace on Walsh’s various social media feeds) is a radical commitment to care, support, love, and healing that permeates their debut record, Venus in Gemini.

Emerging from a solo project, a filled out Dump Him has emerged to create a self-proclaimed “really gay, kinda good” band, according to their Facebook page. With Larz Brogan (drums and vocals) and Zoë Wyner (bass and vocals) for the studio line-up, and with Otto Klammer and Laurel Simonson joining on tour for bass and lead guitar, Dump Him is not just kinda good, but really freaking good.

The seven-track record is nimble and compact. Each song is merely a minute or two, but they get a lot more across than most songs do, dealing with tough and thorny subjects with catchy hooks and lush harmonies. Built on a foundation of thick power chords, Dump Him makes their own mark on a power pop tradition, recalling the likes of bands like Dinosaur Jr. and The Breeders. The song “What’s Yr Deal With Kim?” for example, references listening to Kim Deal bands on repeat as a means to get through and process difficult relationships.

The songs not only deal with, but work through, what it’s like to move away from a place and see your old friends’ behavior get worse; dissociating; breaking off an emotional and draining friendship; dealing with the hypocrisy of those who talk a radical talk, but don’t live up to it; the struggle of keeping in touch; “the hampster wheel of gay death”; and dysphoria, not seeing yourself as the person you see in the mirror, according to descriptions of the songs Walsh wrote for The Media’s premiere of the record.

The songs are not only processing but searching — trying to figure out how to grow as a person under the tremendous weight of being young with strong convictions, being queer and dealing with trauma, looking up at the big hills we still need to climb to make a better scene and a more just world.

Grab a tape before they’re gone. Venus in Gemini is co-released by the Boston based label Disposable America and Anxiety Pop, a new label.