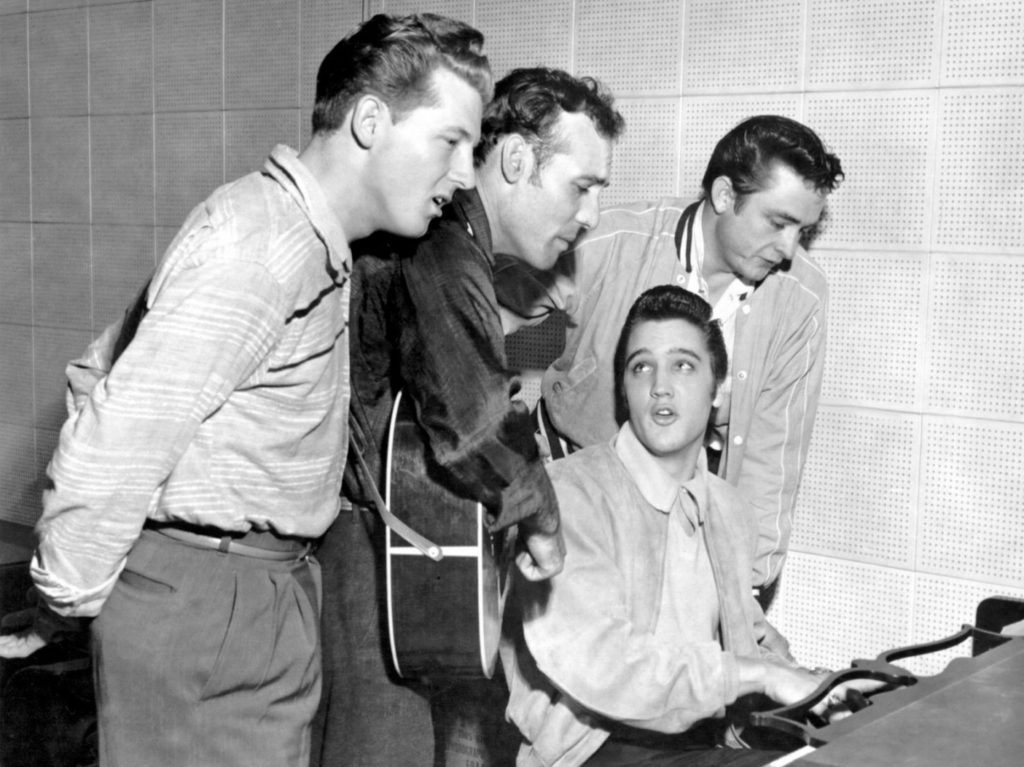 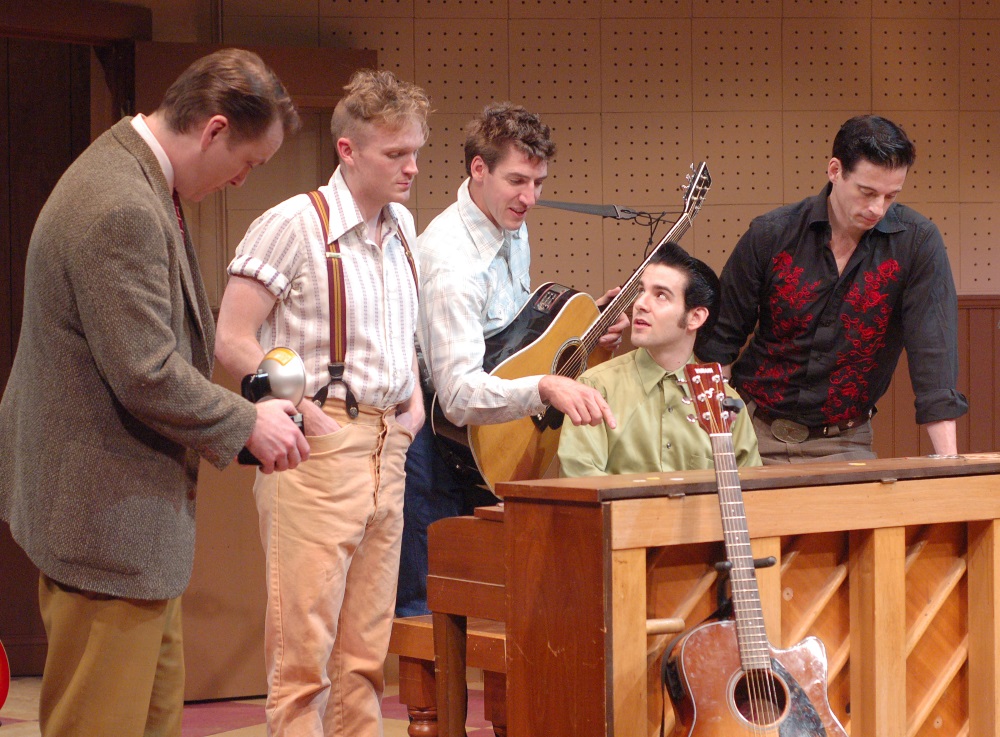 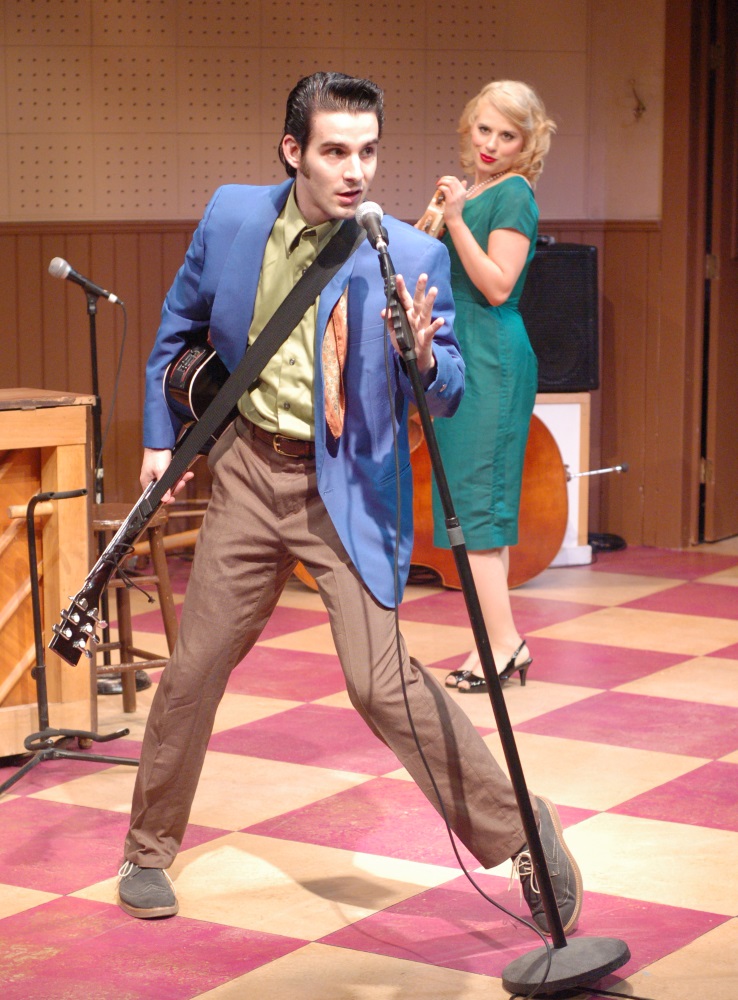 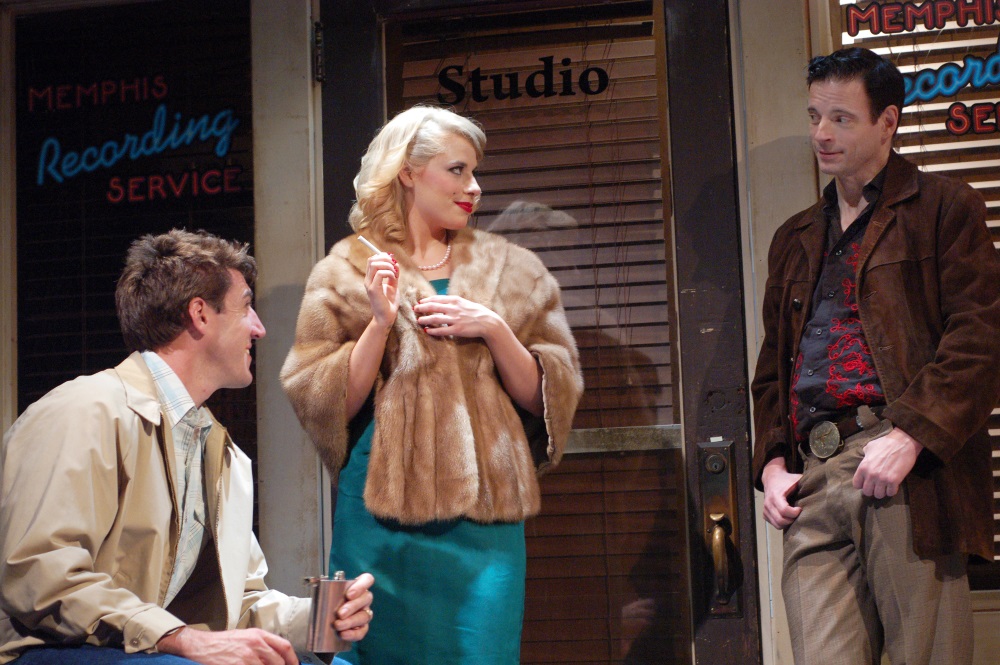 As it happens, two different productions of the same show open on area stages on the same day this week. On Wednesday, Million Dollar Quartet premieres in the Berkshire Theatre Group’s Unicorn Theatre in Stockbridge, and the Majestic Theater in West Springield revives its sold-out hit from last fall.

Here’s a revised version of my review of the Majestic’s original production:

You could call Million Dollar Quartet a fictional documentary. The show is based on a real-life incident and most of the basic facts are true, but almost everything that happens onstage is made up.

This is a jukebox musical in a literal sense: Most of the two dozen songs were fixtures on those brightly lit Seeburg boxes in the early days of rock’n’roll when, as long we had a dime, the music would never stop. And from the look of it, most of the patrons who are bestowing standing ovations on Danny Eaton’s lively production were teenagers themselves when those songs were new.

The facts are these. On the afternoon of December 4th, 1956, four now-legendary musicians happened to be in the Memphis studio of Sam Phillips’ now-legendary Sun Records at the same time. Carl Perkins, whose “Blue Suede Shoes” had been a number-one hit but who was struggling to find a successful follow-up, was recording that day. Phillips brought in his latest discovery, a country boy named Jerry Lee Lewis, to play piano on the session. Another Sun artist, Johnny Cash, who was breaking out on the country charts, dropped in, and so did Elvis Presley, who had originally recorded for Sun but after defecting to RCA Victor the previous year had quickly become a triple-gold-selling star and budding movie idol. 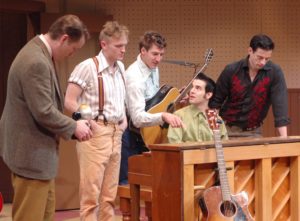 The impromptu jam session that ensued leaned heavily on old gospel and country songs – four Southern boys recalling the tunes they’d learned on the family’s front porch. Understandably, this stage reimaging ignores most of those, in favor of the four singers’ early hits, many of which hadn’t yet been recorded in 1956. Greg Trochlil’s set recreates the cramped recording studio (complete with period microphones, though the performers wear modern headset mics), flanked by the building’s front entrance and the recording booth.

So we hear Cash’s “Folsom Prison Blues” and “I Walk the Line,” Lewis’s “Whole Lotta Shakin’ Goin’ On” and “Great Balls of Fire,” and Presley’s “Hound Dog” and “That’s All Right,” as well as all three joining Perkins on “Blue Suede Shoes.” Oddly, the score doesn’t include “Don’t Be Cruel,” which was in the Sun session, when Elvis did an admiring impression of Jackie Wilson’s slow-groove version, which he reckoned was “much better than that record of mine.”

Most of the numbers follow one another with barely a segué (“Hey, Johnny, why don’t you sing us that prison song of yours?”) – a kind of all-star rock’n’roll hootenanny, occasionally interrupted by pieces of backstory and moments of tension that drive what there is of the plot. 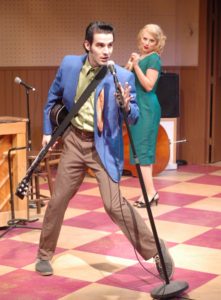 Sam Phillips (a smooth, personable Jay Sefton) serves as narrator, introducing the play as a memory piece and stopping the action now and then for a flashback to show us how he first met and developed these million-dollar properties. In Phillips’ telling, he convinced Johnny Cash to put aside the gospel songs he favored and gave him “the courage to not sound like everyone else,” and saw in Elvis Presley “the singer who could light a fire under a song like those great Negro [R&B] singers.”

The plot interludes, drawn very loosely from history, include Phillips’ urgency to get Cash to re-up with Sun before his contract expires, and Elvis’s desire to work with Phillips again, to which end RCA has offered to buy Sun Records outright – an offer that expires at midnight. Some conflict develops over Perkins’ resentment of Presley, whose star has risen faster and brighter than his, and his dislike of Lewis, the brash newcomer who doesn’t even play guitar – but can rock a piano.

While the four key performers bear only a passing physical resemblance to the iconic men they portray, they are skilled actors and more-than-capable musicians – skilled instrumentalists as well as singers who manage creditable impersonations of their characters’ distinctive styles. Dan Whelton, as hot-tempered Carl Perkins, plays a fiery if not always fluid lead guitar, and Brian Michael Henry’s Jerry Lee Lewis is every bit as impertinent and uninhibited as the original, down to his trademark keyboard shenanigans involving feet as well as fingers. [In this revival, Joe Casey plays Johnny Cash and Joe Boover is Elvis.] 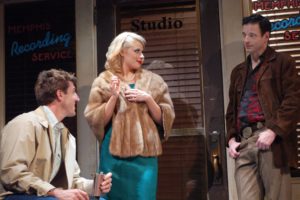 Presley’s girlfriend at the time, aspiring dancer Marilyn Evans, was in the studio with him. Here she’s fictional “Dyanne,” an aspiring singer, who gets two solos – the torch song “Fever” and the R&B classic “I Hear You Knockin’” – but for the most part Kaytlyn Vandeloecht has little to do but hang on Elvis’s arm, evade Jerry Lee’s flirtations, and wiggle during the up-tempo numbers.

Music director Mitch Chakour has amped up a number of those tempos to the point that some individual grooves are lost, but for the most part the music is solid and refreshing, with a three-man “house band” ably backing up the singers.

In his program notes, Danny Eaton recalls that the Majestic Theater’s first season opened with another jukebox musical, The Buddy Holly Story. Opening the company’s 20th-anniversary season, this production fittingly closes that circle. In his curtain speech the other night, he mused that some portion of his (impressively loyal) audience may well have been there for that first opening night.