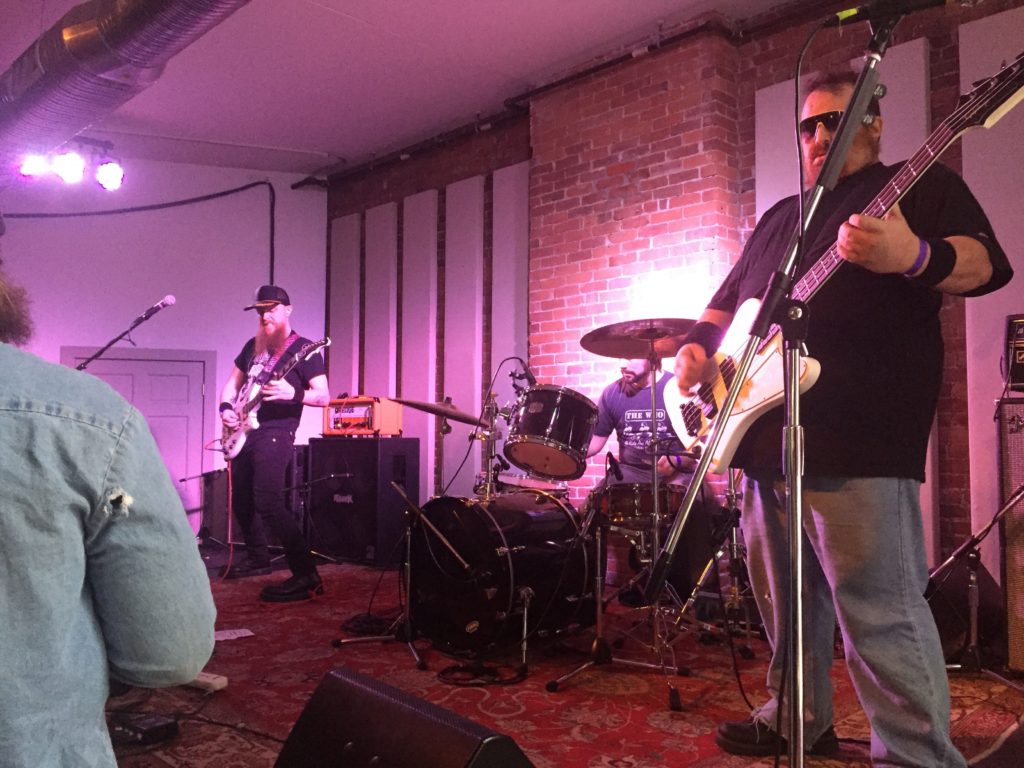 I walked into the entrance of The Arts Block Ballroom on Main Street in Greenfield to soundchecking and friendly, familiar faces. With a couple of hellos’ and hugs, I paid the $20 for the 2nd Annual Stoned To Death fest, put on by Promotorhead Entertainment, and melted into the crowd. 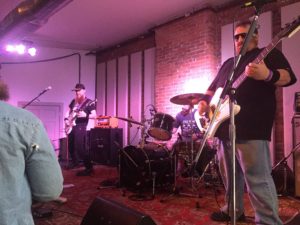 Originally known as The Arts Block, the venue had changed its name this past May to The Arts Block Ballroom when the entire building became Hawks and Reed Performing Arts Center. The building hosts a few venues on each floor, including the smaller, more intimate venue, The Wheelhouse. I checked that out briefly when using the bathroom. It’s rustic and dimly lit and cool. I’ll have to go back to see a show there soon.

While waiting to order a drink, my eyes were darting all around. I read the cocktail specials for the day: Stoned To Death, Acid Witch, and The Brian. I noticed all the merch tables for bands, promoters, and there was one set up with vinyl and CDs from Wicked Music Shop in Keene. The venue was well lit with the light of the early evening coming through the windows. After getting my drink, I chatted in quick conversations as I walked through to the ballroom area.

Unfortunately, I missed the first three bands of the show, but arrived just in time for Easthampton’s doomy metal dudes, Problem with Dragons. They played a handful of songs off their latest Starquake album. Their pulsating distortion sent electrifying bolts to my brain cells as I inched closer to the stage. On stage was bassist Joe Magrone looking all badass with his shades, drummer Eric Cunha exploding his kit in musical aggression, and guitarist/singer Robert Ives’ black painted nails ripping up riffs and telling us alienish stories.

Boston’s experimental doom sludgers, Cazador, came on while I was having a “stoned” break, so when I saw them on stage in all their gritty glory, I fell into a bit of a trance. My friend had popped her head on my shoulder to ask what the band’s name was and I jumped out of my skin and screamed — having checked out for a bit. I picked up their EP Broken Sun that came out last month while at the show. Highly recommend checking these guys out if you like your doomy sludge as much as I do.

More Boston metal bands were in our faces and piercing our ears. Upheaval, a three-piece with dual guitars, were super heavy. Leather Lung who covered “Cochise” by Audioslave as a nod to the recent passing of grunge guru Chris Cornell (singer/guitarist of Soundgarden and Audioslave). Rozamov was another heavy three-piece with the guitarist and bassist switching vocals. At the end of their set, they traded in their guitars for percussion: two floor toms on either side of stage where they banged us into closure.

When talking with Promotorhead founder John Gulow about the night, he said that his plan is to have it grow even bigger next year and include vendors. “Also thinking of moving around to new venues each year,” he said. Their first year was at Waterfront Tavern in Holyoke, for example.

New Hampshire’s extreme death metalists, Solium Fatalis, took control of all of us when they started their set. The energy that radiated off of that stage was felt by everyone and erupted into the constant flow of mosh pits. While watching them I had a funny thought in my head: “I don’t understand why so many people think that metal is the devil’s music. When chances are, one of the dudes in the band is gonna look exactly like Jesus.”

New England’s Black Tomb and their repetitive, droning doom was felt through the walls as I escaped for a bit to go to the ladies’ room. So, I didn’t even miss any of their performance.

Headlining the night was Michigan’s death/psychedelic doom, Acid Witch. They produce songs about horror movies and have that evil laugh going on through the vocals from time to time. At one point during their set, there were issues with the lights. They continued to play with only the illuminating street lights coming through the windows. Whether it was on purpose or not, the lost light suited the show: spooky and on-theme with the fluorescent orange trick-or-treat pumpkin the singer waved in the air.