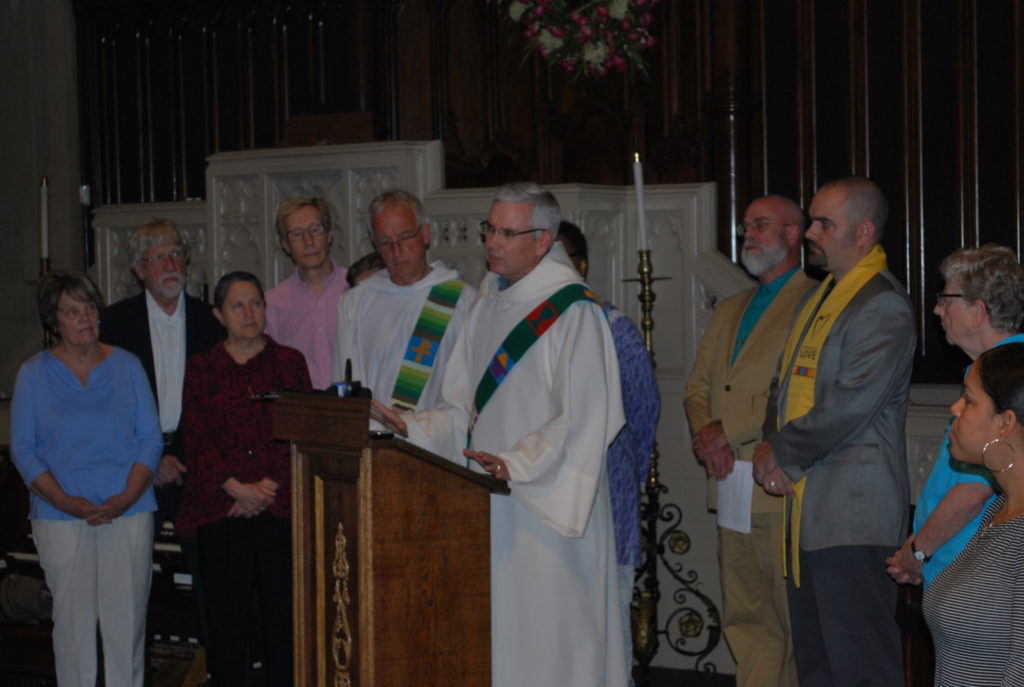 Faith leaders from six churches in Springfield have formed a “sanctuary network,” to provide shelter to undocumented immigrants in response to increasingly aggressive deportation tactics from the U.S. Immigration and Customs Enforcement agency (ICE), including waiting outside court rooms and schools.

Springfield is home to 5,000 to 6,000 undocumented immigrants, according to estimates provided by the Pioneer Valley Project, a social justice advocacy group.

Gerstenlauer said churches are well-suited to fill this role of providing sanctuary for undocumented immigrants, due to the government’s policy of not storming public schools and churches.

But what’s really at the heart of the churches’ efforts, says Gerstenlauer, is faith.

“Our faith values are rooted in Biblical and community faith traditions … To use Biblical language, ‘Treating the aliens among us as citizens,’” he said.

Parrish said although Homeland Security policy forbids ICE enforcement officials from entering a church, they have lingered at churches waiting for people to come outside.

“In Virginia, two gentlemen were detained that were in a warming center in the winter time,” she said. The incident was reported by NBC Washington and Vice. “They came outside of the church building and they were detained. There’s an aggressiveness that’s new on the part of ICE because they’ve been given a lot more freedom to decide how they will do their enforcement.”

Gerstenlauer did not want to provide concrete details about who would be moving in, how many people, and when it would happen outside of “the near future.”

The idea to create the sanctuary network has been in the works for the past seven months. Rev. Jason Seymour of the Unitarian Universalist Society, said his faith’s tradition is to defend the “inherent worth and dignity of all people.”

“We believe that we’ve seen evidence anecdotally and widespread that the current immigration system does not do that,” Seymour said. “This is a time, I think to stand up to values and for the fact that we do have a broken immigration system and in that a lot of the weight falls upon those who are most vulnerable and it’s our responsibility to clean up that broken system.”

“Not having [documentation] in this country is very hard, especially when you leave your house not knowing if you’re ever going to come back and see your kids. You’re depressed. You cannot sleep,” Idelia said speaking through a translator, Pioneer Valley Project organizer Emily Rodriguez.

Idelia said she thinks local churches offering sanctuary would help, but it wouldn’t fix all of the problems undocumented people face.

“It can relieve for the moment. It might fix some things here and there, but it’s not exactly what we want,” Idelia said.

“If I know that they’re going to come for me one day, I’m going to run and go in there. But the sad thing is that Immigration, when they come in for you, they never say they’re coming,” she said. “Now, when you have a check in with ICE, you have that fear that you don’t know if you’re coming back … It was always there, but not as much as now.”

Editor’s Note: This article was changed to reflect errors. Idelia was refereed to multiple times throughout the piece as ‘Idylia’; The headline has been changed to reflect the fact that one church would offer physical sanctuary; Idelia was erroneously referred to as an undocumented person. She is a formerly undocumented person who has legal residency in the United States. An erroneous quote in which Gerstenlauer stated that individuals or a family have been lined up for physical sanctuary has been removed. The Valley Advocate regrets these errors.