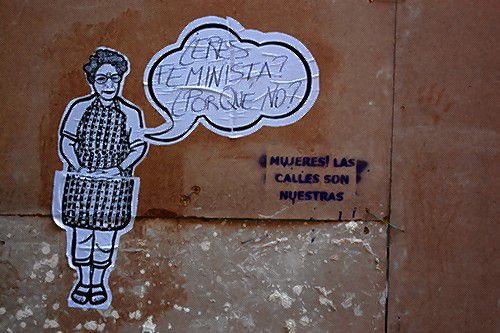 Feminism is a word that has puzzled/infuriated/strengthened so many people in this country. Debates over the goals of feminism rage on, while popular media outlets inject the word into their headlines for maximum clicks. Are selfies feminist? Is makeup feminist? Am I anti-feminist for making fun of Ann Coulter’s reanimated corpse?

In my opinion, “feminist” is no longer a particularly useful adjective, unless it precedes words like “movement,” “women,” or “text.” In this era of clickbait liberalism, actual activism can be replaced by debates over whether or not TV shows, movies, corporations, and celebrities are truly “feminist.” These circuitous conversations distract from the real goals of feminism: illuminating women’s oppression, striving for women’s rights, and promoting women’s community.

The following is not a list of streaming media that I consider “feminist,” because I’m not interested in picking apart each of these titles’ various problems, achievements, and creative goals. This list features films that explore womanhood in fascinating and varied ways as well as feminist texts, concepts, and questions. If you want to watch something that will really make you think, look no further than the following works:

Women in horror are often either defiant or victimized, and no monstrous women are more troublesome than mothers. In The Babadook, Kent subverts typical representations of motherhood in horror. The film follows Amelia (Essie Davis) as she struggles to raise her rambunctious son Samuel (Noah Wiseman). When Amelia’s trauma manifests as a shadowy monster called The Babadook, she must decide whether to confront her demons, or allow them to consume her. The Babadook complicates questions of mental illness and motherhood to produce a satisfyingly genuine story of imperfection. Amelia has her moments as a “bad” mother, but the film refuses to damn her as such. Ultimately, The Babadook engages with past iterations of powerless and/or monstrous mothers to produce something altogether different, in large part thanks to a jaw-dropping performance from Davis.

If a billion people have already told you to plug into The Handmaid’s Tale and you are yet to do so, allow me to be number one billion and one. This series, based on the iconic novel by Margaret Atwood, follows Offred (Elisabeth Moss), a handmaid in the modern dystopia Gilead, as she is uprooted from her family and forced into sexual slavery for a powerful Commander and his infertile wife (Yvonne Strahovski). Gilead, which was formed by radical Christian evangelists after dismantling the American government, offers a look at our own darkest possible future. The show expertly ties in allusions to the Westboro Baptist Church and limited reproductive rights to produce a chillingly true-to-life fable about the power of misogyny and homophobia. Not without its problems (why was there a Nick-centric episode, oh my God, who cares), the show engages with one of the most beloved feminist texts of all time with varied results. Though I’m skeptical of this series, I’m really glad it exists, and I hope it starts a lot of conversations.

I don’t think any modern media takes on feminist theory and thought as deftly as I Love Dick, the co-brainchild of Transparent creator Jill Soloway. In this comedy, Chris (Kathryn Hahn), a disillusioned filmmaker, questions her marriage and disentangles her feelings for the belligerently aloof Dick (Kevin Bacon). Secondary characters like Devon (Roberta Colindrez), a butch lesbian seeking creative inspiration, and Toby (India Menuez), an art historian battling the male gaze, throw this already complex series into even more delightful disarray. Kathryn Hahn deserves an Emmy for her performance here, as she boisterously takes up the persona of real-life feminist author Chris Kraus, who penned the novel I Love Dick in order to explore concepts of objectification, sexuality, and academic misogyny. Academia acts as a pretentiously droll backdrop for the show’s many antics, making this the perfect series for any Five Collegers desperate for some comic relief.

If you want to discover or rediscover the power of feminism through media, consider these recommendations a start. Remember: a woman needs a man like a millenial needs a cable subscription.