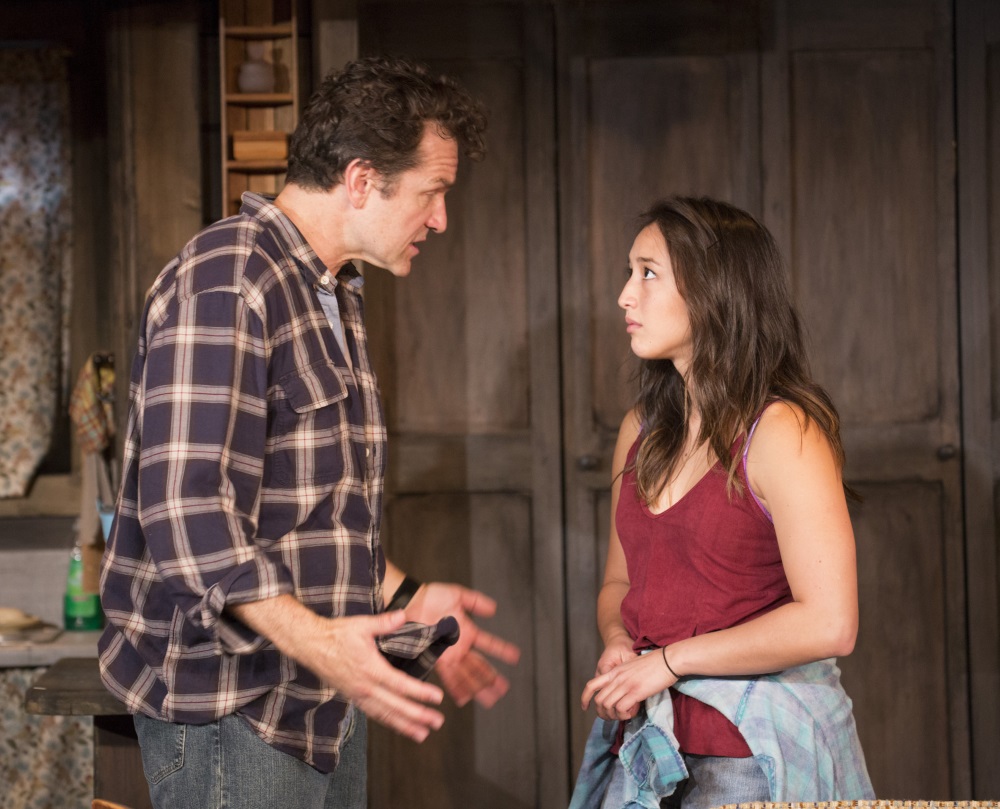 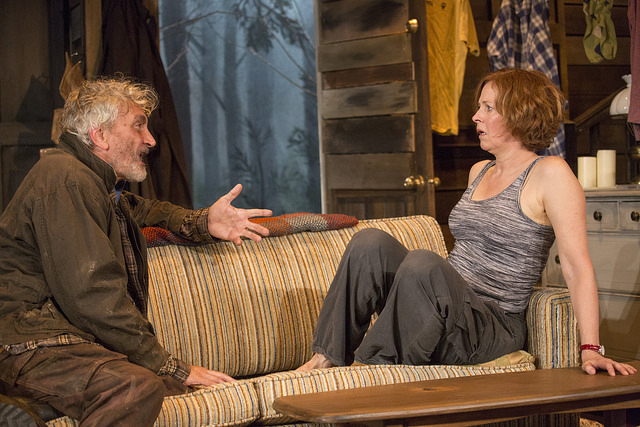 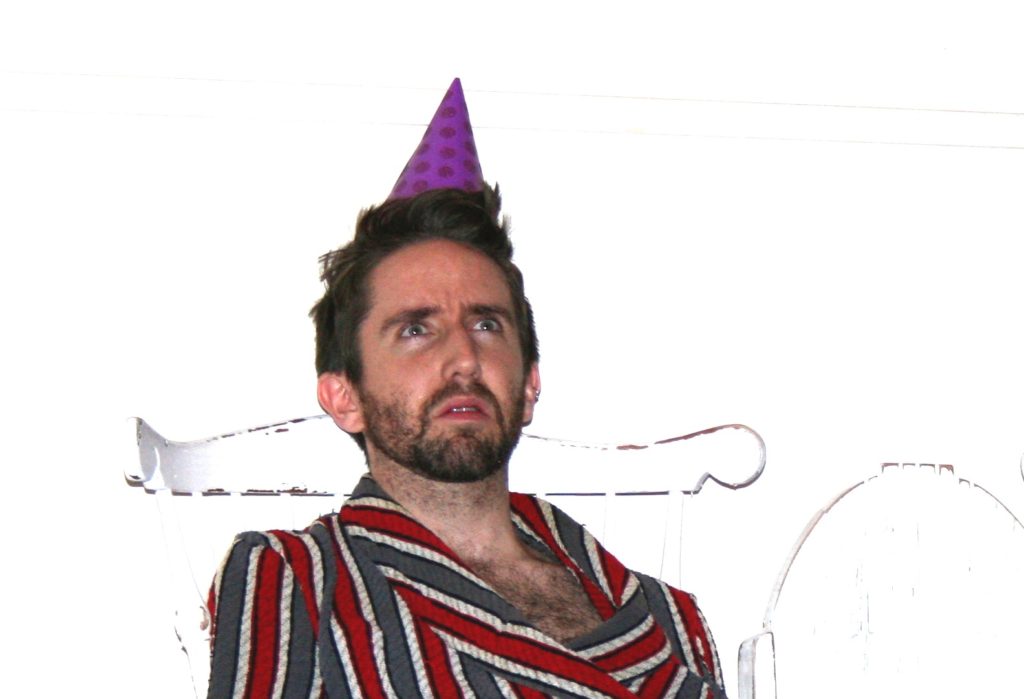 “Birds of a feather flock together,” as the saying goes, but that’s no excuse for these two avian-themed plays to be running at the same time in this area. They are entirely different species.

The Birds, at Barrington Stage Company, is a claustrophobic thriller, while Stupid Fucking Bird, opening on Thursday at Silverthorne Theater Company, is a cheeky updating of Chekhov’s The Seagull.

When asked what Stupid Fucking Bird is about, director Toby Vera Bercovici replies, “Art, joy, heartache, love, love, love.” Which is pretty much what The Seagull boils down to as well. But playwright Aaron Posner has taken those timeless themes and juggled them into a boisterous comedy that turns Chekhov’s original inside out.

The Seagull, like Chekhov’s other great plays, takes place on a provincial estate in a Russia that’s in the throes of change, as old traditions and ways of thinking give way to disruptive new ones. It centers on an aging grand dame actress, an ambitious young ingénue, a fledgling experimental playwright and a best-selling author. Much of the plot is a round-robin of love and desire, both requited and un. 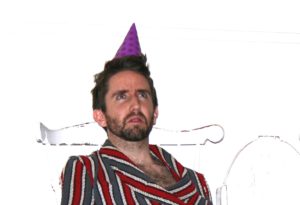 Stupid Fucking Bird (which recently received the Season’s Coolest Title award in this space) is not only about joy, heartache, love, etc., but also about Theater with a capital T. For Bercovici, it plays with “the question of the importance of Art and, most specifically, the Theater – what should, can, and must the Theater be? What is its purpose, what are its limitations? How can a group of people be brought into true presence with one another, and is that what is needed to create change?”

Where Posner’s version departs from Chekhov’s – aside from thoroughly modernizing it, shuffling some of the characters and adding a whole lot more laughs – is in taking The Seagull’s play-within-a-play to its logical extreme. “That balance between humor and pathos that Chekhov’s characters have” is another element that Bercovici says Posner has “updated so beautifully for contemporary audiences.”

You don’t have to be familiar with The Seagull, or Chekhov, to enjoy Stupid Fucking Bird. And even if you are, Bercovici warns, you should come “expecting to have your expectations constantly subverted.”

The revolt of Nature is a key theme in the horror genre, and The Birds is a classic example. Daphne du Maurier’s chilling 1952 short story – set in World War II Britain as a metaphor for the Blitz –  was the inspiration for both the Alfred Hitchcock movie and the Conor McPherson play now at Barrington Stage. Both versions have as little to do with each other as they do with their source.

The only things all three have in common are the premise (suddenly and unaccountably, the avian world has turned deadly, as massive flocks of crows and seagulls take to attacking humans) and the oppressive terror of being trapped in a house that offers only provisional shelter from the marauding menace.

The cause for this sudden change in nature’s ways is never made clear. But as director Julianne Boyd said before Sunday’s performance, today’s scary world of impending environmental disaster makes it easy to imagine it’s about just deserts for our rape of the planet. 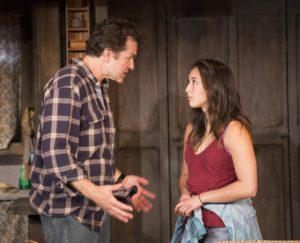 The bird-imperiled haven in this version is a lakeside cabin in which three strangers have gathered for refuge: Diane, a lapsed novelist and estranged single mother; Nat (who shares his name but nothing else with du Maurier’s protagonist), calming his jittery psyche with whiskey; and Julia, a bright and bouncy teenager who turns out to be the least transparent of the trio.

The play opens with a shock followed by a shudder followed by a joke – but the humor is edgy, sometimes veering into the absurd. The tension doesn’t really build, partly because the piece is arranged in short scenes, with the cast serving as stagehands for the transitions. But McPherson isn’t as interested in the external threat as in what it does to the threatened people inside.

There are a few spikes of alarm, when the birds mount their recurrent attacks, but in the weeks of enforced captivity the looming sense of dread gives way to boredom and bickering. (After initially flinching at the sound of birds scratching and rustling in the attic, the inmates soon begin to ignore it.) Their predicament breeds morbid thoughts of death, furtive opportunities for end-of-the-world sex, and sudden impulses for murder. (A hammer, an ax, a shotgun and a barred door play supporting roles here.) 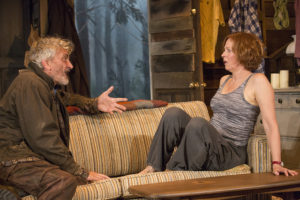 Boyd’s crisp production is propelled by a quartet of terrific performances. As Nat, Stevie Ray Dallimore is volcanic, panicky and self-pitying in turn, and Sasha Diamond (returning to BSC from/after last year’s peerless) brings a kitteny mischievousness to the mysterious Julia. Kathleen McNenny’s Diane is the grownup in the house – steady, thoughtful, caring, but secretive and ultimately the most alarming. Berkshire theater veteran Rocco Sisto gives a thrilling cameo as a crazy-eyed gun-toting neighbor, both fearsome and fearful.

The production’s co-stars are the sound design by David Thomas, which surrounds the house with danger, and Alex Basco Koch’s projections, placing the cabin in its perilous surroundings.